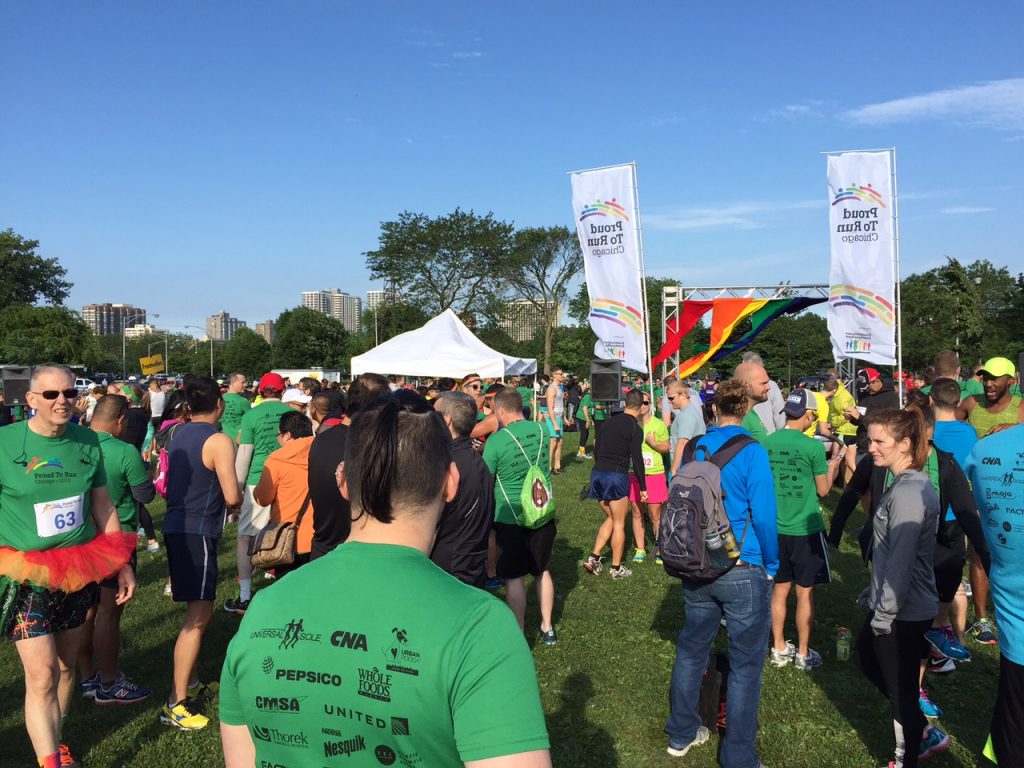 Breakdown: After the landmark decision by the Supreme Court on Friday, Saturday’s Proud to Run event—a 10K run and 5K run/walk that has been around since 1982—celebrated its biggest year yet, with more than 1, 700 registrants (for the last several years the event has hovered around 1500 participants). And walking up to basecamp in a grassy expanse of Montrose Harbor, it was clear that there was indeed plenty of celebration going on, with thumping music, colorful costumes and excited runners.

I spoke with race director Justin Koziatek before the race and he stressed that the race is “here for people to celebrate Pride in a fun and healthy way,” but also that the 5K includes a walk option to make it clear that anyone can participate regardless of experience. He also pointed out an effort to be more inclusive by tailoring the running categories to “male-identified” and “female-identified.”

The 10K started on time at 8:04am with an impressive drag queen blowing an air horn and the 5K kicked off ten minutes later in similar fashion. The clear courses for both races spent some time along Simonds drive before veering off into the multitude of running trails that traverse the area (Cricket Hill, a favorite for race directors using Montrose Harbor to include, was avoided). Crossing a finish line adorned with rainbow fabric the day after such a historic ruling felt doubly rewarding.

Price: $45-$50
Course: With a 5K and a (slightly larger) 10K winding through similar areas at the same time it was impressive that race directors kept the two separate enough to avoid any jumbling up of runners. Starting on Simonds and only filtering onto a running trail after more than a half mile allowed runners plenty of room to spread out.
Organization (gear check, etc.): Gear check was quick and friendly, and packet pickup at Universal Sole was too. Some runners seemed a bit confused about when the 10K started and when the 5K started so organizers could use a bullhorn at the starting line. Otherwise, spot on.
Goodie Bag (includes shirt): A bright green running shirt and a reusable Whole Foods/Pride bag were given out before the race. But the rainbow-colored medal (which doubles as a bottle opener) was the real prize.
Weather: In the sixties with a slight breeze coming off the lake—a perfectly prideful morning. (Zach Freeman)