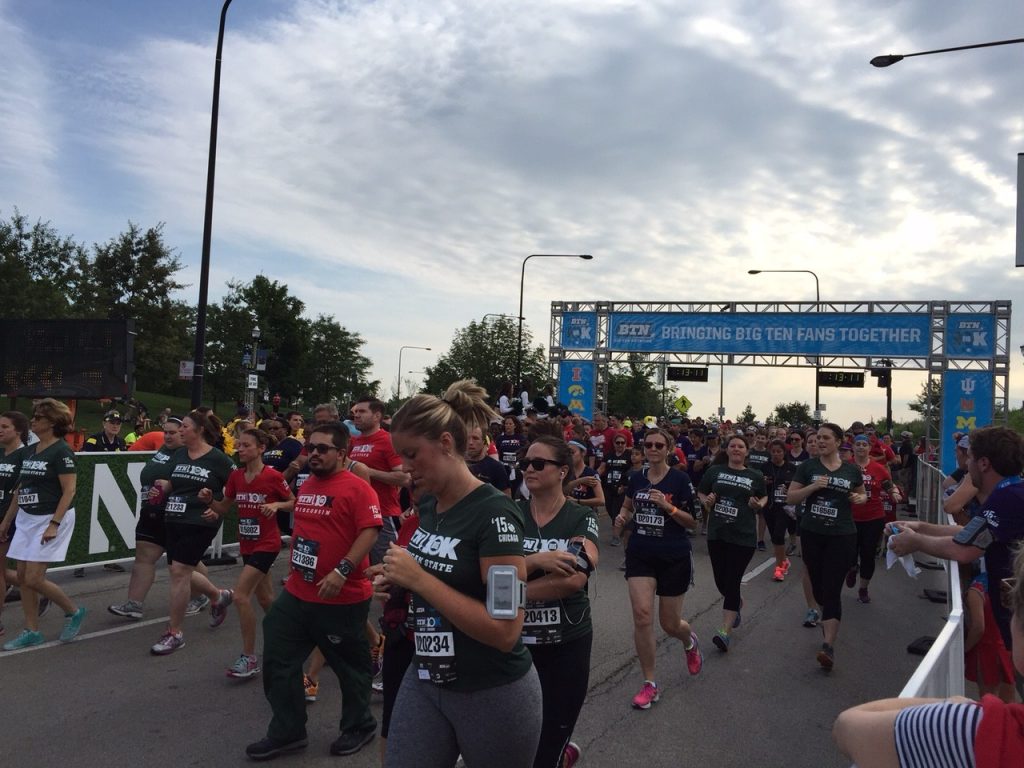 Breakdown: For six hours Saturday morning, the area between Soldier Field and McCormick Place was swarming with more than 13,000 Big Ten fans—alumni, students, parents and supporters—all with a common purpose, despite their varying school allegiances: to run 6.2 miles (or at least 3.1). This is the fourth year for the BTN Big 10K (which also features a 5K distance) and, back in its original location near Soldier Field, it continues to draw large crowds and put on a large post-race party (christened the “Fan Fest” and featuring bags, games and food).

This is a large race by any measure and race organizers have dealt with this by breaking the field out into waves and releasing packs of runners every three minutes, allowing for a more open course. Having the course follow the far less scenic route west of Lake Shore Drive allowed for comfortable running despite the large numbers. The familiar slip ‘n’ slide of years past appeared around mile five and though it didn’t have many takers, its appeal on a hot, humid July morning can’t be overstated.

Basecamp, in a parking lot just north of McCormick Place, was a sprawling, raucous, tailgate party of an experience, with all kinds of booths, giveaways and university promotions. School mascots and cheerleaders were all on hand for high fives and photos. For any diehard Big Ten fan (those do exist right?) this was the place to be on a Saturday morning in the Midwest, though the audience response to commissioner Jim Delany’s appearance and brief speech at the starting line was rather tepid. It may be the Big Ten (and its network) that’s being celebrated, but I suspect revelers really just want to lift up their own alma maters.

Price: $53 for the 10K, $43 for the 5K, $25 for the kids 5K (twelve and under)
Course: Not the most exciting course for a race so close to the lakefront, but a prudent one given the size of the running field. Sending runners west under and then down the west side of Lake Shore Drive provided plenty of space to spread out but not a lot to look at. But heading north on the open Lakefront Trail after the turnaround made it clear why the course was chosen. Volunteers throughout were helpful to both runners and non-participants caught by surprise on a trail overrun with Big Ten runners.
Organization (gear check, etc.): Four days of packet pick-up, along with race day (for an extra $15) made for easy, no-wait pick-ups. Gear check was large enough to handle the field, but organizers made the mistake of assigning numbers by predicted finish time, leading to long lines developing for specific gear check sections on a rolling basis while all others had no lines. Volunteers moved all other aspects along quickly.
Goodie Bag (includes shirt): A unique gimmick for this event is the ability for runners to choose which of the fourteen schools in the Big Ten—yes, there are fourteen schools in the Big Ten; don’t ask—they wish to represent and receive a race shirt specific to that school (for example, choosing Northwestern results in a purple shirt with white lettering that reads “Wildcats” across the back). Runners also receive a pair of sunglasses, a Goose Island beer and an Amylu sausage post-race.
Weather: In the high seventies and low eighties, good for a slip ‘n’ slide, hot for a race. (Zach Freeman)