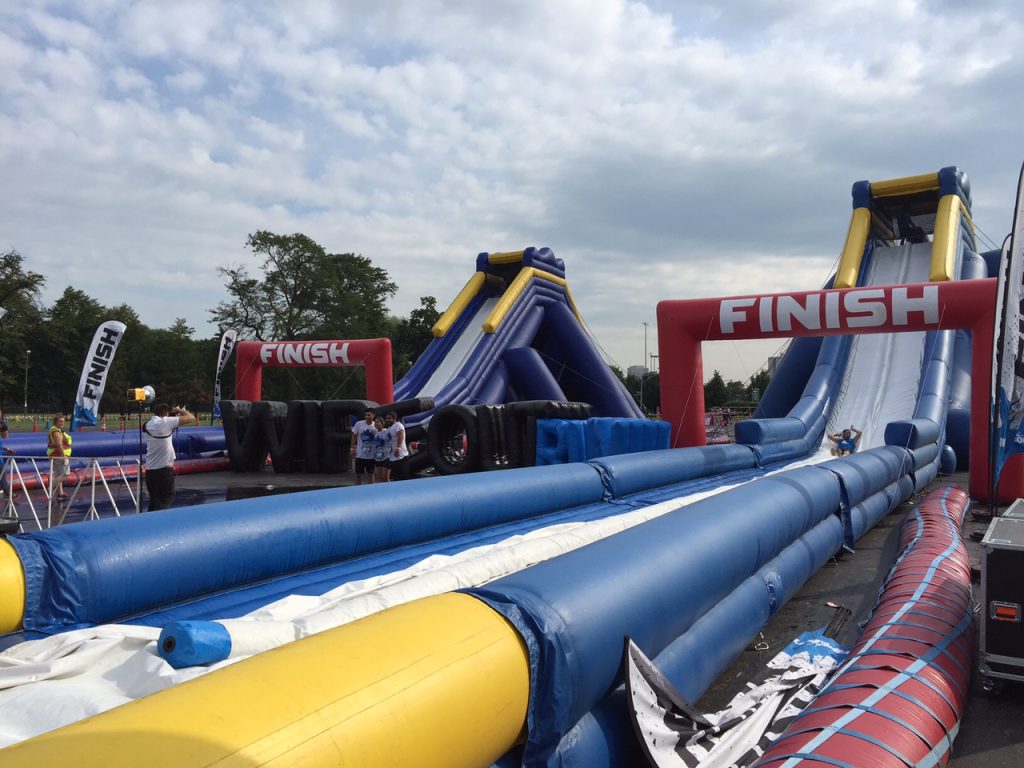 Breakdown: Since 2008, the reality series “Wipeout” has been a mainstay for ABC, with the network airing 148 episodes of the obstacle-course-challenge show over seven seasons. Despite recent rumblings that season eight has been cancelled due to low viewership (neither confirmed nor denied by ABC), the brand, pairing with what was formerly ROC (Ridiculous Obstacle Challenge) Race, has taken to the streets with a nationwide race series called WIPEOUTRUN.

Setting up shop in the parking lots surrounding U.S. Cellular Field for the Chicago leg of this tour, thousands of participants paraded through a course consisting of giant inflatable obstacles with names like “Big Balls,” “Sweeper” and “Foam of Fury.” And though many of these certainly have the right to be called obstacles, there are also a number that are just entertaining water park rides—from the inner-tube-driven Tumble Tubes to the epic finale slide christened Happy Endings.

Though billed as a 5K, the course, which wound its way around a series of cones and fences, registered as only slightly longer than two miles by my measure. Still, lines at various obstacles extended completion time to at least a forty-five minute experience. Individual costumes and team themes provided an extra level of entertainment on the course, along with pounding music and the fun of watching other participants… wipe out.

Price: $54-$81, with rolling price increases
Course: Surely no one signed up for an experience called WIPEOUTRUN based on an obstacle-laden reality show expecting to actually race—for the record, there’s no timer and even if there were, lines at different obstacles would slow your time anyway. Still, calling this a 5K is a bit of a stretch. Why not just leave that part off and let the distance be undetermined? The obstacles themselves are almost all fun to attempt, especially the inner-tube slide, where you can pick up some pretty impressive speed before splashing down.
Organization (gear check, etc.): With only one day of pre-race packet pick-up and a $5 fee for race-day packet—pick-up, the long lines shouldn’t have been unexpected for race organizers and should be addressed. Similarly, the gear check was one of the most disorganized I’ve seen for such a large event—I was asked three times for my bag’s number from a very frustrated-looking volunteer. The pre-race line was lengthy but moved quickly, as did lines during the race.
Goodie Bag (includes shirt): For such a heavily branded event, the white cotton t-shirt is a bit of a disappointment, with an extra charge for a “high performance tech t-shirt” seeming like a blatant cash grab, especially with a large merchandising tent present on race day.
Weather: Temperatures in the eighties, with little cloud cover. Typically this would be hot for a race, but with so much water it was almost ideal. (Zach Freeman)