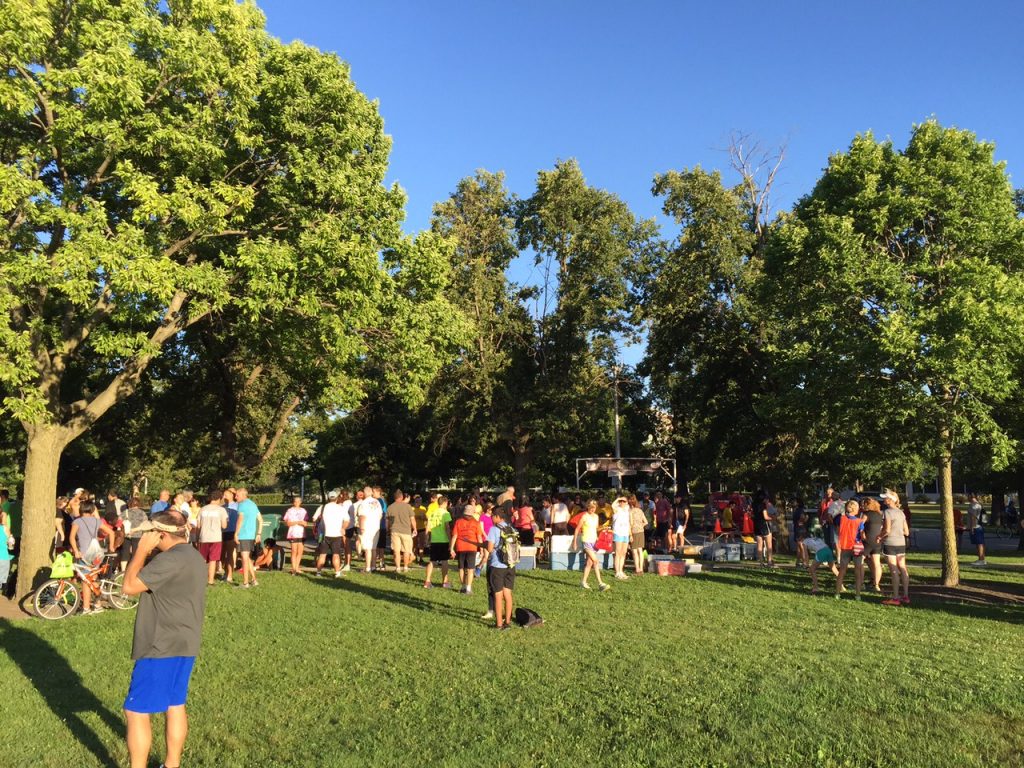 Breakdown: Standing at the makeshift starting line at the edge of Norwood Park last night—a day before the true full moon, race directors readily acknowledged—preparing for the kickoff of the fourth annual Chicago Full Moon Run, I marveled at the peaceful suburban neighborhood streets around me (had I really just parked my car for free only a block from the race?). Only I wasn’t in the suburbs. I was in the far northwest corner of Chicago, where parking is plentiful and you can run a foot race on the streets as long as you have a few volunteers directing traffic.

And that’s the way this race runs. Coupled with a mile race (billed as the “1 Mile Lunar Orbit”), this neighborhood event managed to draw in almost 200 participants this year with its cheap entry fee and charity mission (proceeds going to “benefit the battle against Multiple Sclerosis”). The 5K course is a double loop around Norwood Park and the surrounding neighborhoods, a quick, flat course through tree-lined streets on a perfectly-temperatured evening that led to a lot of quick running.

One small table handled packet pick-up and race-day registration in the hour leading up to the race and runners gathered in the park until just before the race started. The race had the amiable vibe of a fun run, but a number of high school cross-country runners showed up to make for an impressively fast winner’s circle for such a small race. A post-race party at a local bar (Mo Dailey’s Pub & Grille) served both refreshments and an official awards ceremony. I love a big race as much as the next runner, but this race is the kind of neighborhood gem that serves to remind us why we love the sport.

Price: $20-$30, with rolling price increases.
Course: I’m usually not a fan of double loops, but for such a small race I can make an exception. The majority of the race was on the street proper, with one long stretch on Avondale covered on the sidewalk instead (commandeering neighborhood streets is one thing, busy through-roads another). Turns and miles were marked with yellow plastic plates scribbled with black ink or by waving volunteers.
Organization (gear check, etc.): No gear check, but almost everyone parked nearby. I did see a runner give his car keys to the race announcer before the race. It’s that kind of low-key. Streets were blocked off in the loose sense of the word—cars were still driving, but plenty of volunteers were around to make sure they were aware of the runners. Old school, reusable running chips were used that needed to be attached to your shoe, but volunteers collected them quickly at the finish line.
Goodie Bag (includes shirt): A mustard-yellow running shirt with the race logo on it. Unique colors are always welcome and this one will certainly stand out.
Weather: It was a hot day but cooled down in the evening for ideal running conditions on shaded streets. (Zach Freeman)