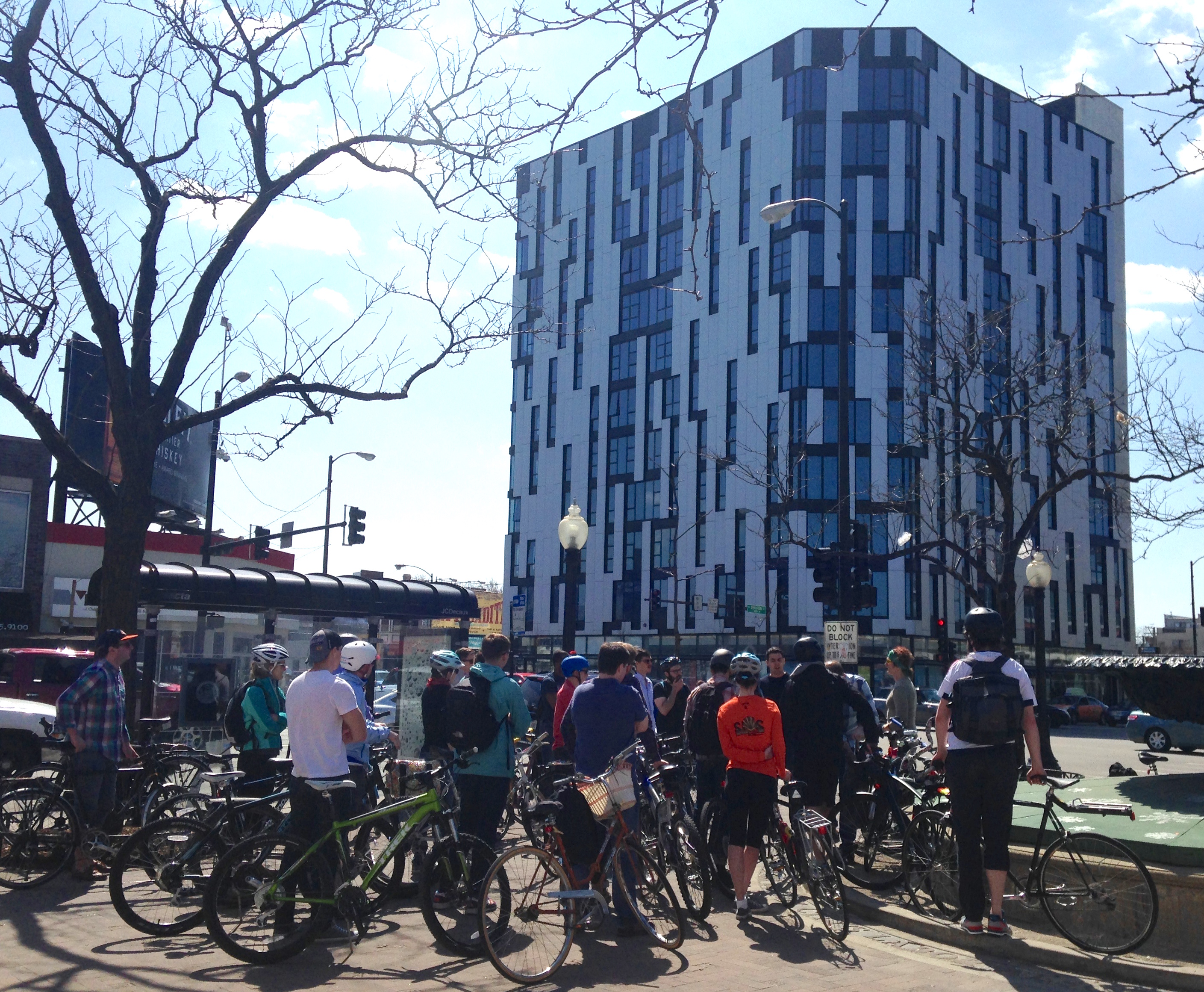 The 1611 West Division building has 99 units but zero parking for residents./Photo: John Greenfield

Believe it or not, back in the early nineties, ex-mayor Richard M. Daley was planning to tear out an entire branch of the El system. “The Lake Street branch of what’s now the Green Line had terrible slow zones and you could almost walk to Oak Park faster,” recalls Jacky Grimshaw, the Center for Neighborhood Technology’s vice president for policy. “The mayor and the CTA president wanted to take it down.”

Grimshaw says this moment of crisis was the birth of Chicago’s transit-oriented development (TOD) movement, a push to create dense, parking-light housing and retail near rapid-transit stations in order to reduce car dependency. CNT and the West Side community organization Bethel New Life teamed up to present the CTA with a plan for TOD near the Lake/Pulaski stop, but it fell on deaf ears.

However, after Grimshaw penned a “woodsman spare this tree” op-ed for the Tribune, Daley apparently took notice. Soon afterwards, she says, the CTA managed to find $364 million in funding from leftover projects to pay for rehabbing the Lake Street branch.

Chicago’s TOD movement has picked up steam over the past couple years. In 2013, City Council passed its first TOD ordinance, sponsored by First Ward alderman Proco Joe Moreno. The city’s zoning code generally mandates a one-to-one ratio of parking spots to housing units in new or rehabbed buildings. However, the 2013 law cuts that requirement in half for parcels within 600 feet of a rapid-transit stop, 1,200 feet on a designated Pedestrian Street, and allows higher density within these districts.

The legislation spurred a wave of development in Moreno’s ward and other Northwest and North Side neighborhoods. The most visible of the new TOD towers is the 1611 West Division building in Wicker Park, which looks like a giant silver ice cube, with ninety-nine units but zero parking for residents. Other projects are currently under construction by the O’Hare Branch’s California station and the Brown Line’s Paulina stop, and several more TOD developments are in the planning stages.

These new developments aren’t without controversy. Some neighbors assume that every new resident will own a car, and fear that dense housing with fewer parking spots will lead to traffic and parking nightmares.

And, earlier this month, the grassroots group We Are/Somos Logan Square, led a protest against upscale TOD projects slated for that neighborhood, arguing that the addition of hundreds of high-end apartments will fuel gentrification and displacement. Moreno has required the developers to make ten percent of the units affordable, but Somos is pushing for a higher percentage. 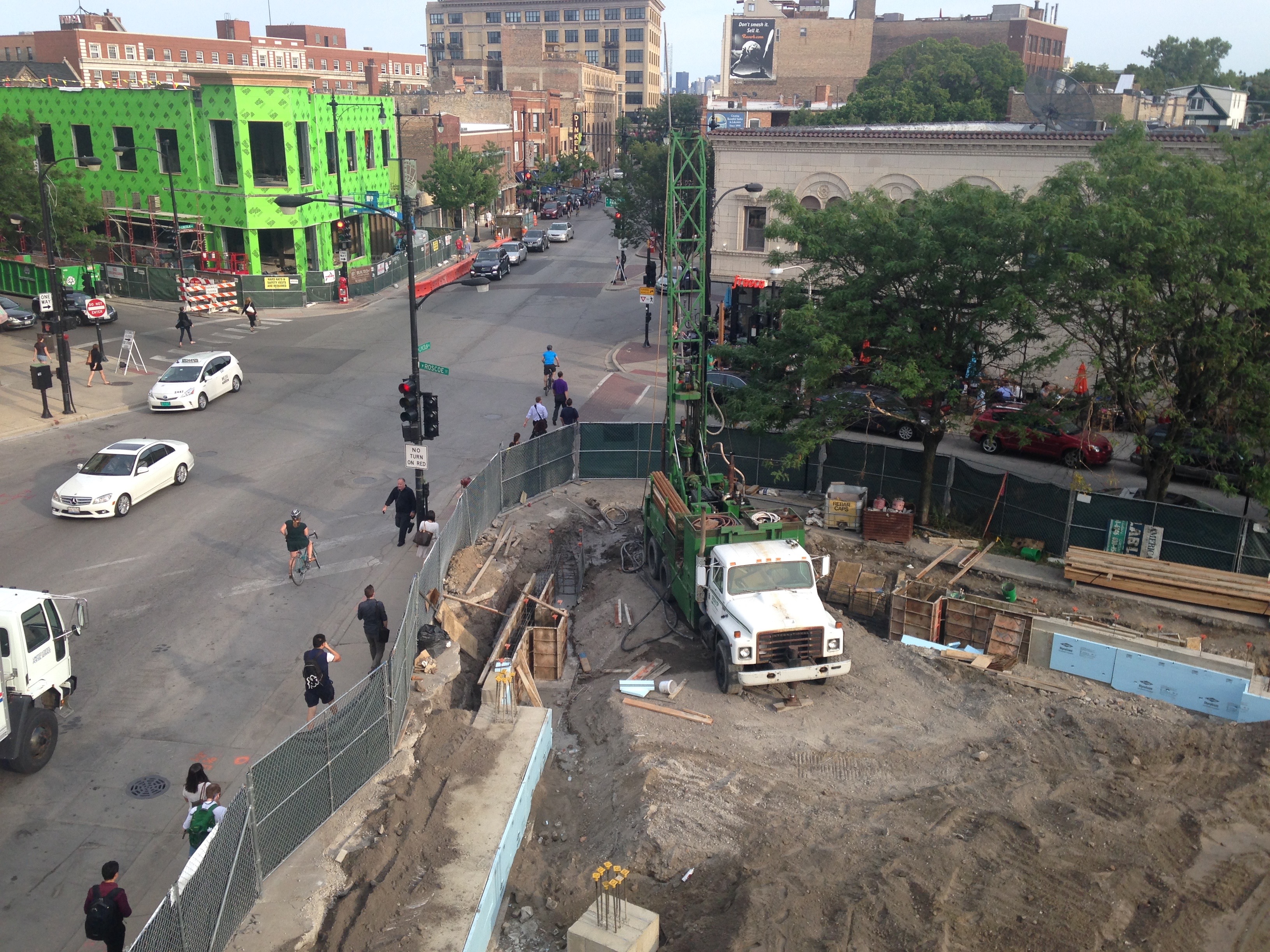 The TOD movement shifted into high gear in late July, when Mayor Rahm Emanuel introduced a robust new ordinance that would more than double the range of the districts and eliminate the parking minimums altogether. Land within 1,320 feet of a station would be eligible, 2,640 feet on Pedestrian Streets. Developers would also get a density bonus for including on-site affordable housing. The city’s fifty aldermen will probably vote on the new law this September.

CNT is strongly endorsing endorsing the new ordinance. “New York, Boston, San Francisco and Philadelphia have been growing around transit, while Chicago has had policies that have made us grow away from transit,” Grimshaw says. “TOD is a great way to get us out of that hole.”

The demand for smaller housing units near transit has risen in recent years, largely due to the fact that young people are staying single longer and having kids later, and they’re driving less, according to CNT project manager Kyle Smith. However, between 2000 and 2010, the Chicago region only added 9,576 net households within a half-mile of CTA and Metra stations, he says.

“What’s pretty amazing is that the number of housing units has actually decreased near transit in areas where you wouldn’t expect it,” Smith says. For example, although Lakeview is one of the city’s strongest real estate markets, its population has dropped in recent decades.

A study by CNT and the Lakeview Chamber of Commerce found that the number of households near the Southport Brown Line station fell six percent during the last decade, driven by a nineteen-percent drop in rental units. Some of this change can be attributed to multi-unit rental buildings being replaced by larger condominiums. Two-flats—especially greystones—are also being converted into single-family homes.

One criticism CNT has of the new ordinance isn’t that it wouldn’t address this preservation issue. Also, under the new law, there’s no incentive to make more than ten percent of a development affordable. The nonprofit has a focus on equity, so they’d like that number to rise to as much as twenty percent, Grimshaw says.

All of the new projects have been in gentrified neighborhoods, but CNT also wants to see TOD used to spur investment in low-to-moderate income communities. “Further west on Lake Street and south on the Red Line, there are gaps in economic activity and housing,” Grimshaw says. “This ordinance should send a message that TOD is important, not just on the North Side, but for developments of all kinds, in neighborhoods of all income levels.”