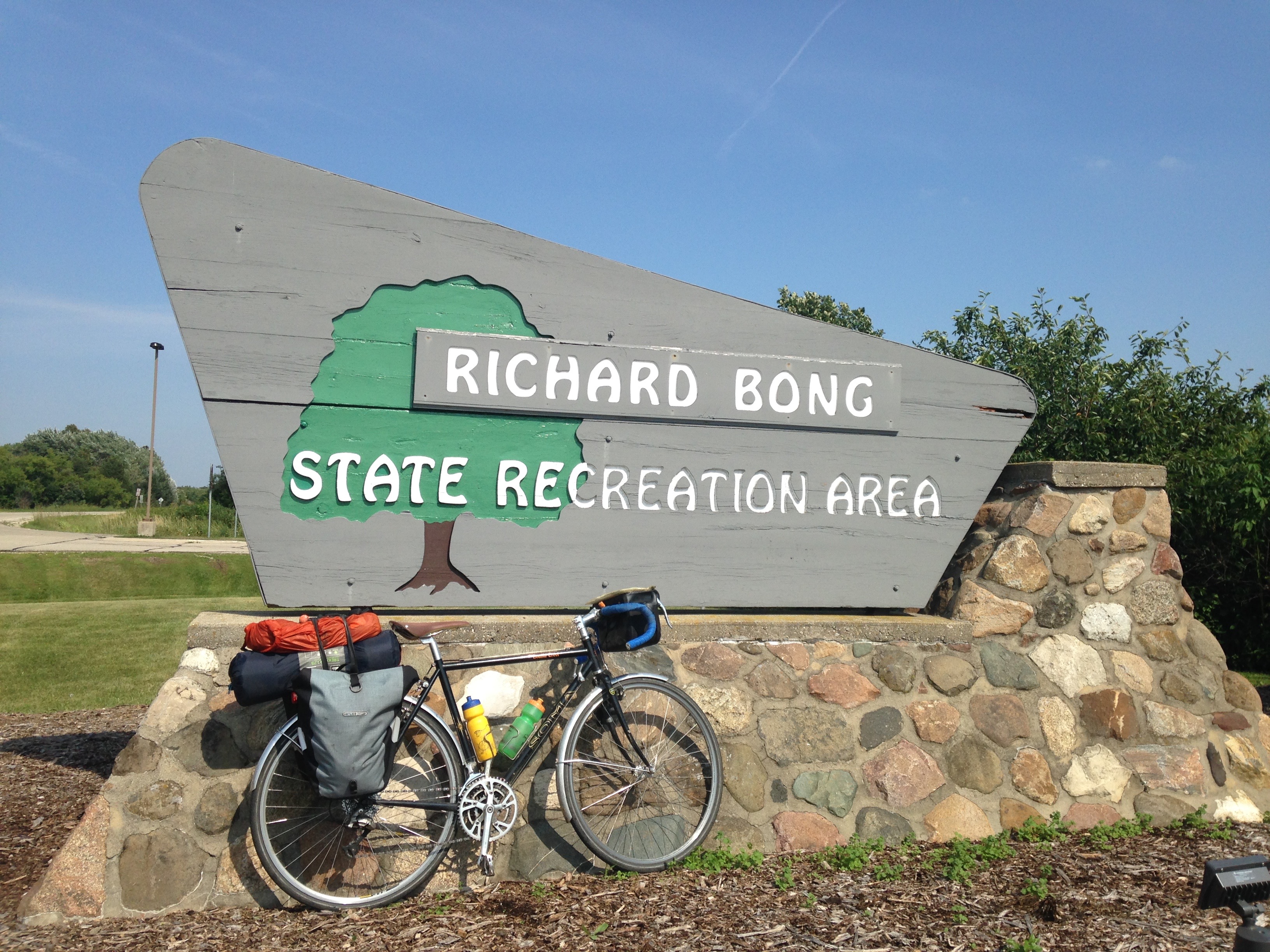 I like to think of myself as a gonzo transportation journalist, the Hunter S. Thompson of pedestrian, transit and bike writing. After all, I’m the guy who wrote the book “Bars Across America: Drinking and Biking From Coast to Coast.” But I steer clear of drunk cycling, and I’ve had little experience with illegal mind-altering substances on my car-free road trips. One bicycle journey I took from Kansas City to St. Louis along the Katy Trail did end in a psychedelic mishap, but that’s a tale for another day.

However, I had a smokin’ good time in late August on a train-and-bike excursion to Richard Bong State Recreation Area in southeast Wisconsin. It was the latest of several fun excursions I’ve done this summer, taking advantage of Chicago’s status as the nation’s railroad hub, with great Amtrak access, plus convenient commuter rail service via Metra and the South Shore Line.

Since the worst experiences often make for the best stories, let me first tell you about a car-free camping trip to the Indiana Dunes National Lakeshore my girlfriend and I took in early August, which nearly ended in disaster. The Dunes are my go-to getaway from Chicago—it’s easy to hop a South Shore train from the station below Millennium Park and go hiking, snowshoeing or cross-country skiing for the day among those mountains of sand.

I’m used to being able to take a backpack on the South Shore, disembark at the Beverly Shores stop, and stroll a couple blocks to scenic Dunewood Park campground, but this time when we arrived, a sign said that all the campsites were full. However, we found that many of the more remote walk-in sites were unoccupied, although closed off from the rest of the campground by snow fences.

It’s always been my philosophy that it’s easier to ask forgiveness than ask permission, so we stashed our gear behind a tree by one of the closed, overgrown campsites and headed to the beach. Of course, when we returned to the campground well after dark, we couldn’t locate our site, so we were poking around in the dark with our headlamps for way too long, which apparently freaked out the neighbors.

After we finally pitched our tent and headed toward the shower house, a pair of beefy, humorless park rangers were waiting for us. They said the remote walk-in sites had been permanently closed due to problems with alcohol- and drug-fueled rowdiness. If we didn’t clear out our stuff immediately, they sternly warned us, we’d be arrested.

By the time we’d packed up, it was far too late to catch the train home, and the situation seemed nearly hopeless. Fortunately, John and Briana, a couple from Michigan City, Indiana, vacationing with their young son Caidon, kindly allowed us to share their campsite. The evening ended with pleasant conversation about indie rock around the campfire, punctuated by sips of Fireball and alcoholic root beer.

Each year in late August, I try to leave town in order to miss the Chicago Air and Water Show. Even if you live miles from the lakefront, it’s impossible to avoid the aural assault of the screaming warplanes. This pointless display of military hardware turned tragic this year when Master Sgt. Corey Hood, an Iraq and Afghanistan war veteran, was fatally injured during a skydiving performance.

This year, I chose Bong State Rec Area for my escape. However, I soon learned that the park is named for Richard Bong, a Swedish-American World War II flying ace who shot down more than forty Japanese fighter planes. What would Alanis Morissette say?

But my trip across the Cheddar Curtain turned out to be high times. I caught Metra’s Union Pacific / North line to Kenosha with my bike to meet up with my buddy Jonathan. He arrived exhausted from cycling forty-five miles from Rogers Park in steamy weather. After he refueled at Captain Mike’s—an excellent burger bar that’s sort of the Kuma’s Corner of the Badger State—we pedaled seventeen miles west to the 4,515-acre natural area. 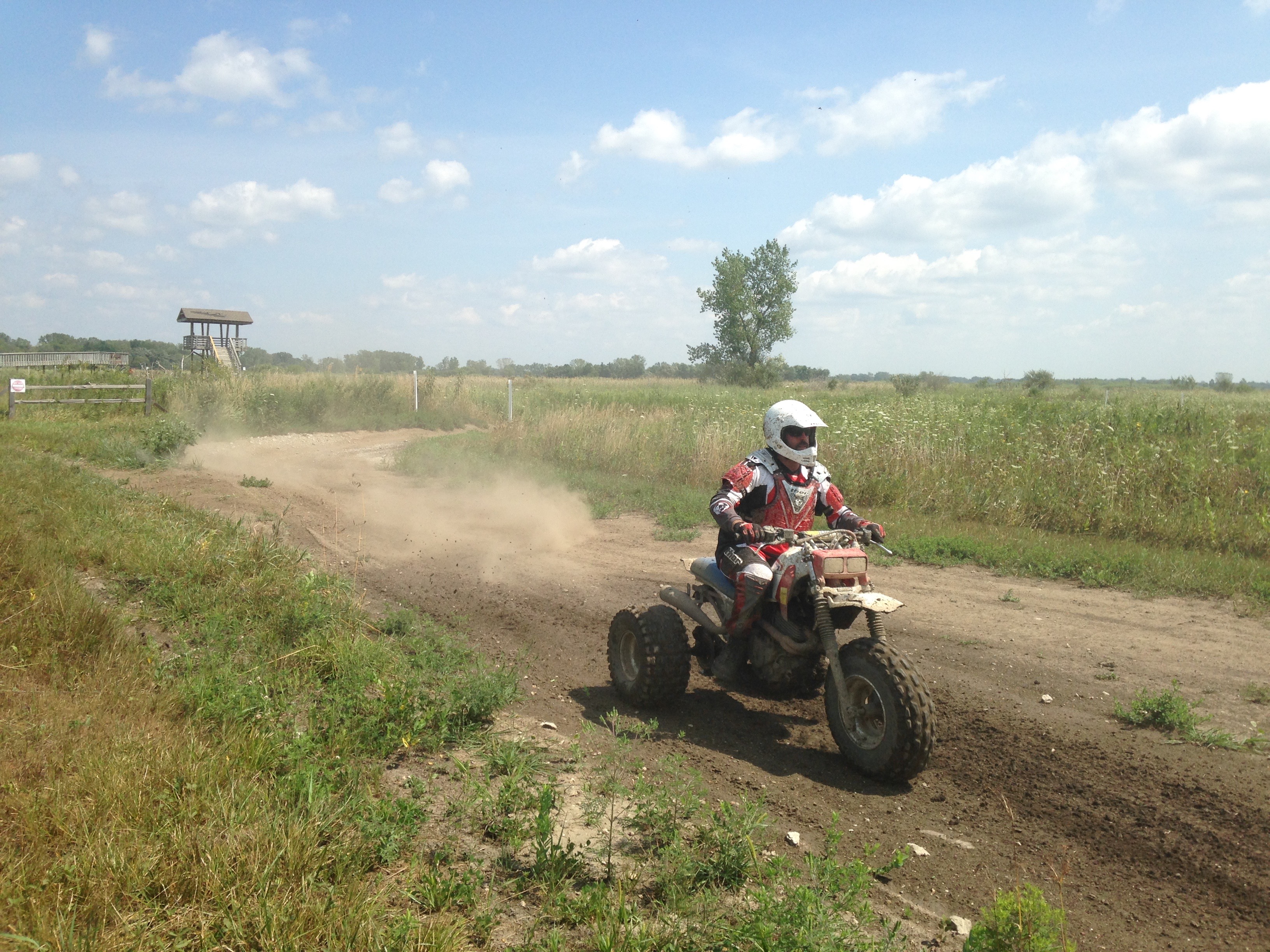 The park includes a nice mix of prairie, woodland and wetland, plus a number of pretty little lakes. Since it’s a state recreation area, it features a number of activities not often available in state parks, including model-airplane flying and rocket launching, dog training and hunting. The centerpiece of the park is an ATV and dirt bike track, but this mullet-friendly facility did little to take away from the generally serene feeling I got from the Bong.

Unfortunately, campsite 420 was occupied, so we chose 320 instead. I cooked up a hearty dinner of macaroni with cheese curds and local sausage, which I’d picked up that afternoon at Kenosha’s Harbor Market. This massive farmers market features topnotch produce and talented street musicians, including a young man who crooned Sam Smith’s “Stay With Me” with the voice of a goddamned angel. After dinner, I lounged by the fire, making yet another attempt to get through Thoreau’s “Walden.”

The next day, we took a mellow four-mile hike around Wolf Lake, the park’s largest body of water. Under the cobalt Wisconsin sky, we wandered past fields of wildflowers, witnessed heron soaring over the lake, and spied countless monarch butterflies. Although we were strolling through a monument to a famous fighter pilot, the “War and Slaughter Show” seemed a million miles away.

Put that in your pipe and smoke it.