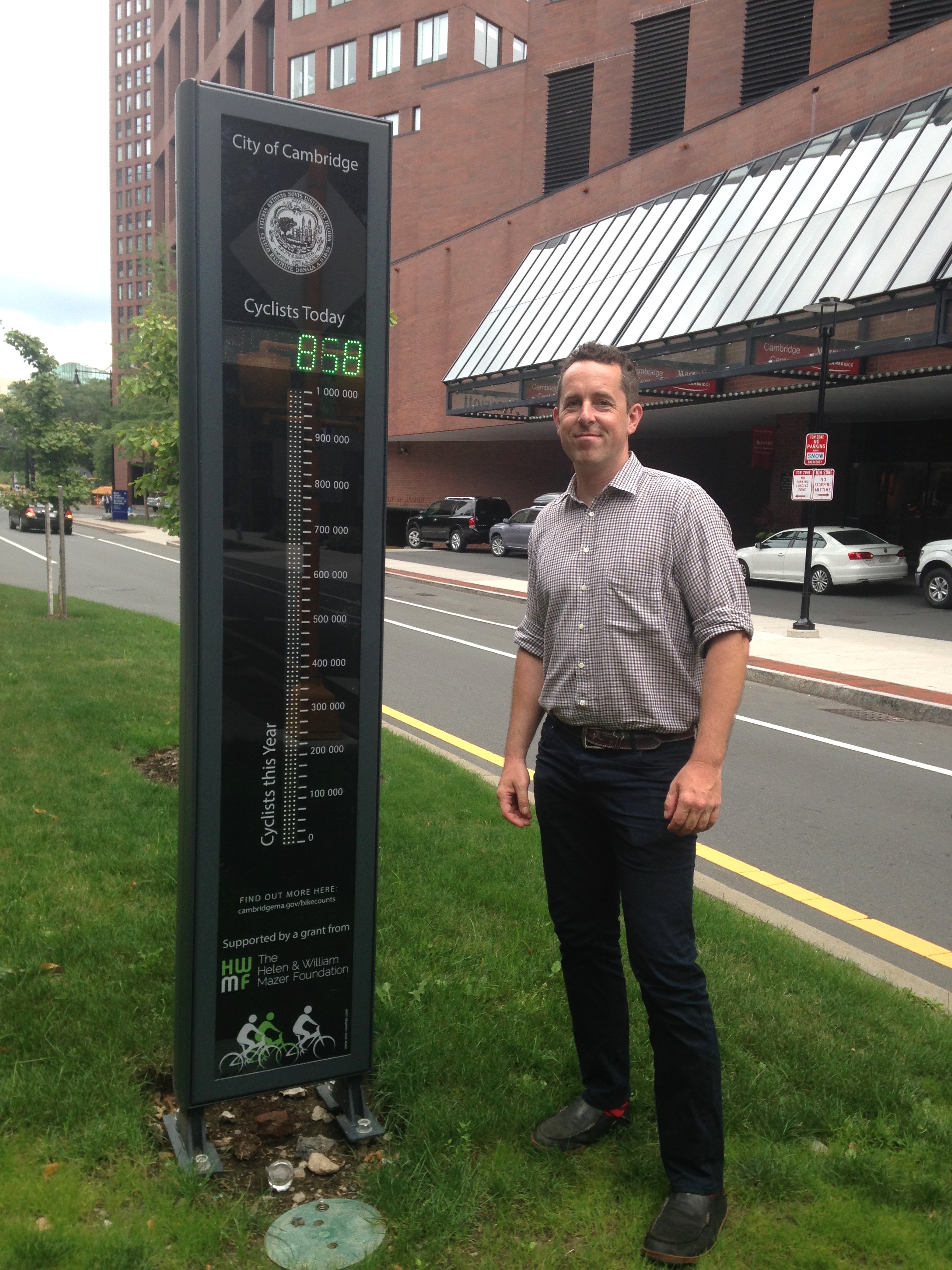 Pete Stidman with the Cambridge bike counter. Why can’t we get one of these on Milwaukee Avenue? Photo: John Greenfield

When Pete Stidman, the former director of the Boston Cyclists Union, visited Chicago for a conference a couple of summers ago, I let him crash on my futon. I have since realized that the blazing temperatures in my Logan Square living room on that particular weekend made sleep nearly impossible. I visited my cousin in Beantown last month and Stidman, who’s now working as the active transportation specialist at a planning firm, returned that (dubious) favor by taking me on a bicycle tour of the area’s burgeoning bike network.

Boston, a city of 655,884 residents (4,628,910 metro) has come a long way since 1999, when Bicycling Magazine ranked it as the nation’s worst city for biking. When I meet up with Stidman at the lovely Brewer Fountain in Boston Common, the city’s biggest downtown green space, he explains that much of the blame for that title can be traced to the city’s then-large population of “vehicular cyclists.”

Vehicular cyclists are cult followers of John Forester, author of the book “Effective Cycling” and son of “The African Queen” writer C.S. Forester. John preaches that cyclists are safest when they operate like drivers, pedaling in the center of the lane. Of course, most people aren’t willing or able to bike twenty miles per hour to keep up with cars, but Boston’s Foresterites have actively lobbied against installing bike lanes, arguing that they’re unnecessary and, paradoxically, dangerous.

Stidman says that, in 2004, the Livable Streets Alliance formed and, in 2010, the cyclists union launched, and these groups have advocated for street designs that work for all users, of all ages and abilities. “We now have a bike czar, and it’s clear that Mayor Marty Walsh is listening to his constituents who want to see more bike lanes.” There’s currently a proposal for the Connect Historic Boston Bike Trail, a network of curb-protected lanes that would encircle the downtown peninsula.

I check out a cycle from the city’s Hubway bike-share system, which uses the same equipment as Divvy, and we’re off. We roll through Downtown Crossing, a brick-lined pedestrian mall, but Stidman points out that few people are hanging out here because there’s almost no place to sit. “During Boston’s darker days [of white flight], benches were taken out, and a lot of people were pushing for getting rid of places to hang out—they thought they attracted the wrong element.”

Thankfully, that trend has reversed. Boston City Hall now recently put in Astroturf, seating and yard games as an invitation to linger. And when we get to our next stop, the Rose Kennedy Greenway, there are dozens of people relaxing in red Adirondack chairs on the lush lawn. This network of parkland, named for JFK’s mom, winds for about a half mile around the east side of the peninsula, occupying land where the double-decker Central Highway once stood. The massive Big Dig project, completed in 2008, moved the expressway underground.

While the Big Dig was originally supposed to cost $2.8 billion, the estimated final cost will be $22 billion. Stidman has mixed feelings about the expense, but he says it’s a hugely positive thing that there’s no longer a highway cutting through the middle of Boston, and that it has a ton of beautiful new public space that’s well programmed with seating, art and other amenities.

I’m particularly amazed by Janet Echelman’s aerial sculpture “As If It Were Already Here,” a complex network of rainbow-colored ropes that soars 600 feet above the street. Just think what we could do with all the extra land if Chicago launched a similar—but much cheaper—project to cap the Kennedy Expressway in the West Loop.

Next we roll by the gray complex immortalized by local band The Modern Lovers’ song about rocking “at the Government Center / To make the secretaries feel better / When they put the stamps on the letters.” Stidman tells me that Mayor Walsh unsuccessfully proposed a bill to get the group’s song “Roadrunner,” about cruising Massachusetts highways late at night, declared the official state rock song.

We cross the Longfellow Bridge into Cambridge, the home of Harvard and MIT, where Stidman points out a Copenhagen-style bike counter erected in the middle of a boulevard—858 cyclists have passed by today. It would be great to get one of these devices installed in Chicago’s Wicker Park, next to the Milwaukee Avenue “Hipster Highway.” That would be helpful for justifying the removal of car parking from one side of the street to make room for protected bike lanes.

While Chicago currently has about seventeen miles of PBLs, the city of Boston only has one protected lane street so far, but Cambridge already has four. We ride down a beautiful new, European-inspired raised bikeway on the village’s Western Avenue, which involved the conversion of one of the car lanes. A smartly dressed gentleman crosses paths with us. “I think this kind of bike lane attracts a different kind of cyclist,” Stidman says. “They’re going a little slower, and they’re a little more dressed-up.”

Not everyone we encounter is so genteel, however. As Pete slowly rolls into a crosswalk on Massachusetts Avenue, Cambridge’s main drag, an old lady scolds him in a textbook, working-class Boston accent. “I’m just making a left turn,” Stidman says. She fires back, “Well, you should at least walk your bike, dipshit.”

I note, “If this was Chicago, she would have said ‘jagoff.’”