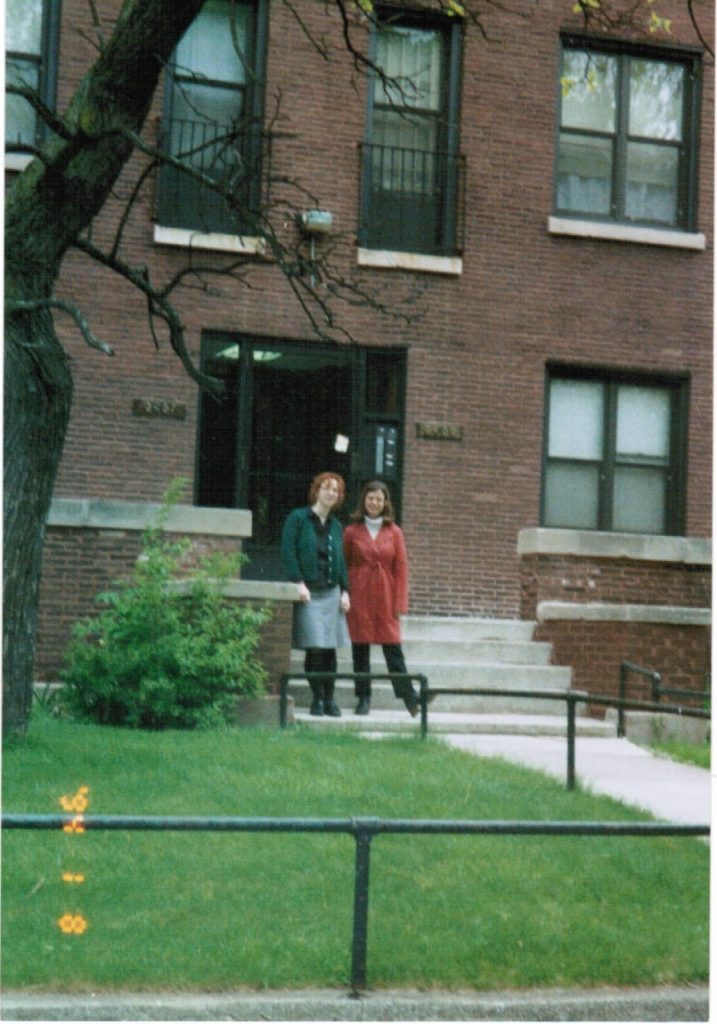 The author and her friend Andrea outside her Hyde Park apartment, circa 2001.

I’ve made a career out of my own curiosity. Fourteen years ago this week, my interest in the lives of buildings began. It started with my own story but the university and the world changed my perspective a thousand degrees.

For the year leading up to graduate school at the University of Chicago, I ditched my apartment and relied on the good graces of friends to save on rent. It became a joke not to invite me over or I’d stay a month. Two weeks before the start of fall classes, my boyfriend moved me into a cheap apartment on 53rd and Blackstone and I finally had a space of my own. Days later, he broke up with me. Just days after that, terrorists attacked the World Trade Center on September 11.

My apartment was my refuge. Everything I needed was inside: a radio, a vintage red reading chair and ottoman, and books stacked on the floor. The only view was of a surface parking lot that didn’t bother me because it let in lots of light. Sometimes, I looked at the two windows of my apartment from the outside and thought of how nondescript they looked. My life was inside.

The World Trade Center building itself thrust architecture into the middle of an international conversation. Structural failures were analyzed. The cladding of the steel support beams and building codes of 1973 debated and technology of that day compared to the present.  Drawings of evacuation routes appeared in the newspaper. Section diagrams displayed the relationships between the floors and showed us how the elevators worked. Eventually, we learned what caused the building to completely melt into the ground.

The building’s design and the lives inside were unavoidably linked.

The New York Times spent months of Sundays running the stories of the men and women who were killed on September 11, calling the series “Portraits of Grief.” Their photos were tiled on the back pages of the paper from top to bottom, like the pattern of the small windows on the buildings. Reading them turned into a ritual. [This victim] was thirty-one. “‘He just wanted to get married, have lots of babies, and drink wine.’ said his fiancée.” Story after story, week after week.

Downtown Chicago was on high alert because our buildings were now targets. Imposing concrete barriers were placed along the perimeter of most commercial office buildings to ward off the possible threat of a terrorist driving a bomb into one of them. Security tightened. In those early days after the terrorist attacks, it wasn’t seen as safe to be there or even on public transit. The Sears Tower was under assumed threat, as was our water supply. Architects and engineers for years afterwards debated the merits of building tall.

Inside all of the gothic buildings on the U of C campus, the ground was shifting but things looked remarkably the same. Classes started on schedule. In The Pub at Ida Noyes Hall, people laughed and ate cheeseburgers, reviewed syllabi and expectations. People went to the Mellow Yellow on 53rd Street for waffles. While it was surreal, it was also comforting to have time to mark the break from things as they once were and process what was to come. 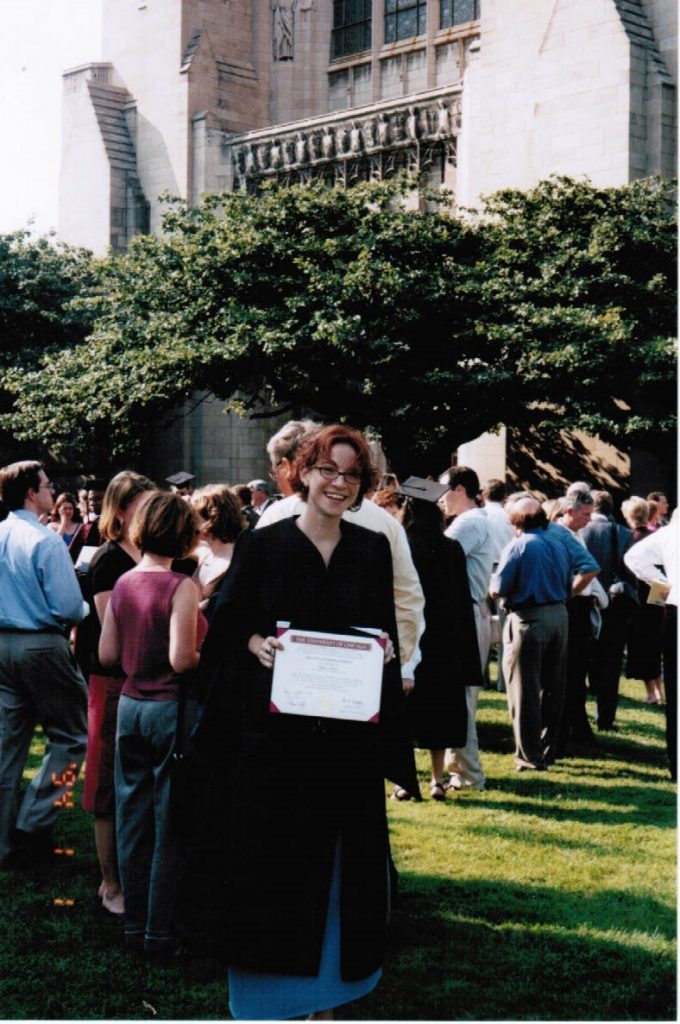 In my classes, I learned about “urban theory,” “political economy” and “the life of the street.” In reality and in my intellect, cities were becoming more complex. Buildings not only house people but they are designed by, built and sold by other people. They are owned by people, sometimes those who reside there and sometimes not. They are desired or neglected.

I came to graduate school with a curiosity about the things that happen inside of Chicago’s buildings. Before grad school, I’d worked for six years as a union organizer and visited homes all over the city: red-brick two-flats, public housing towers, graystones and bungalows. I’d sat in hundreds of living rooms to talk to people about work. Life inside of each home was relatable, full of family photographs, crockpots making stew, grandchildren doing homework, and well-kept upholstery. Everyday, all over the city, life was identifiable and surprisingly banal.

While at school, it was during long walks on the South Side that I attempted to translate what I’d learned onto the city itself. Building after building and block after block led to questions and hypothesis about Chicago and the nature of change. I’d venture south along the lake to the South Shore Cultural Center and past the boundary of 67th Street. There were the lovely gothic high rises and the blocks of mansions where Jesse Jackson lives. In that particular part of the neighborhood, there was a historic plaque to tell the story of its beginnings. Between the beginnings and the present day are thousands more stories. They should also be memorialized.

Inspired by a movie I’d seen at Doc Films, I walked  from my apartment to downtown to experience Chicago’s urban-planning legacy at the pedestrian level. I spent most of the day heading north down Cottage Grove, King Drive and Michigan Avenue. I passed public housing and men standing on street corners, and women waiting for the bus. People coming in and out of the corner store, hopping into cars, or pushing strollers toward home. The actions of everyday lives.

The city is represented in maps and in texts. It has been written and observed. You can’t consume it all in a day, or ever. Forces act upon it; people and power shape it. Interpret. Test theories and assumptions. Look up. Walk around.