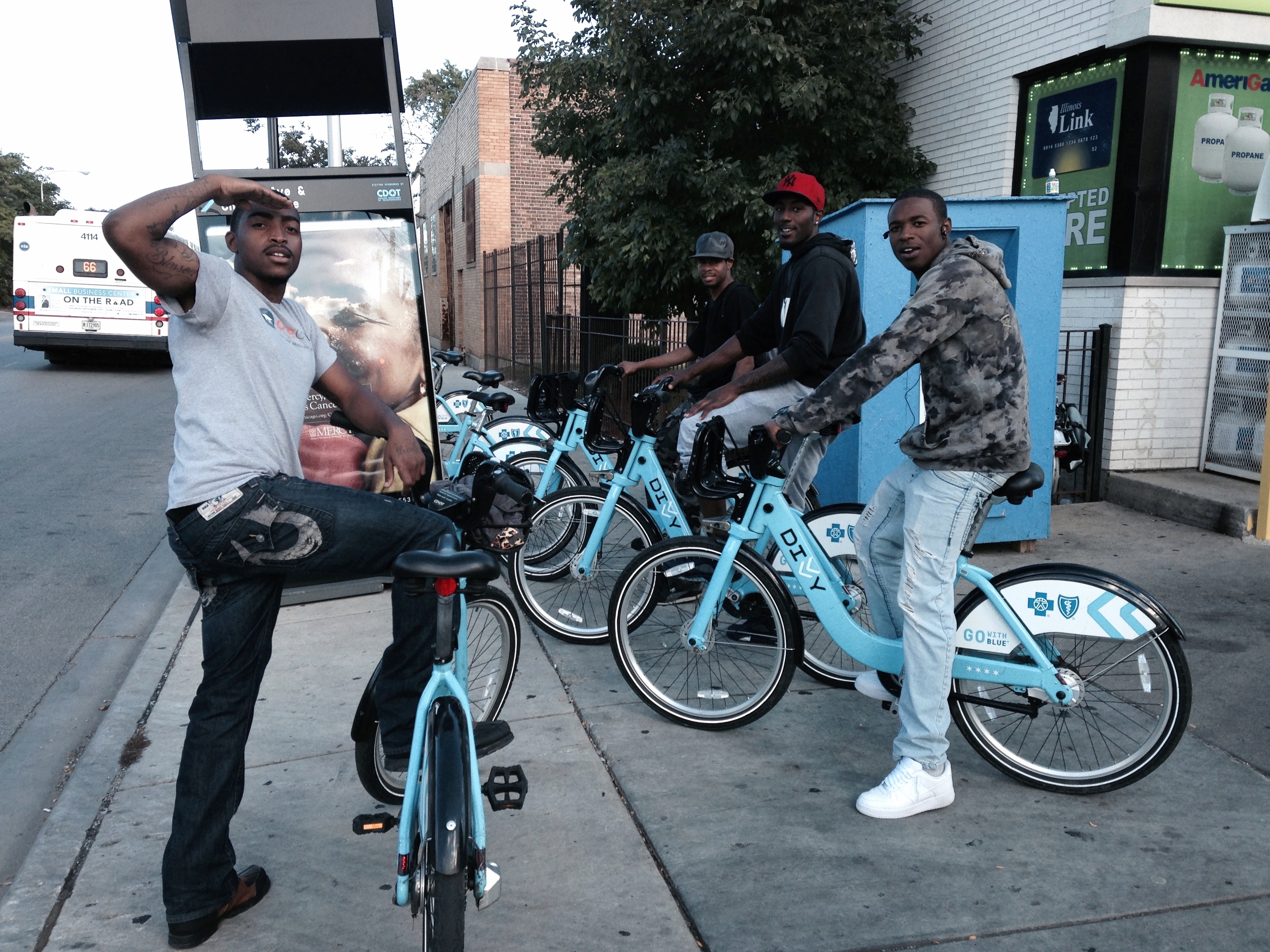 Before the Divvy bike-share system launched in June of 2013, city officials promised that attracting an ethnically and economically diverse ridership was a top priority. “Since we’re using public dollars, it’s important that the folks who are using the service reflect everybody in the community,” said Scott Kubly, deputy commissioner of the Chicago Department of Transportation at the time. “It’s a challenge, but we’re going to crack it.”

That hasn’t happened yet. Like most American bike-share systems, Divvy’s membership has skewed white, male, young, educated and relatively affluent.

The system currently has about 30,000 annual members. Of the hundreds who responded to a recent survey, sixty-five percent were male, and seventy-nine percent were non-Hispanic whites—a group that makes up only about thirty-two percent of the city’s population. The average age was thirty-four, the majority of respondents have middle-to-upper incomes, and ninety-three percent have a college degree or more.

One reason for this lopsided demographic is that, while yearly passes are a bargain at $75, the up-front cost is still a barrier to some low-income people. Moreover, the fact that a credit card has been required to use the bikes has excluded unbanked Chicagoans.

To help reverse that trend, the city launched the Divvy for Everyone (D4E) equity initiative on July 7. Funded by a $75,000 grant from the Better Bike Share Partnership, plus matching funds from Divvy sponsor Blue Cross Blue Shield of Illinois, the program offers one-time $5 annual memberships to low-income individuals. Residents can sign up in person, and no credit card is required—the funding serves as insurance for any lost or damaged bikes.

So far, D4E has been wildly popular. The city’s goal was to sign up 800 people in the first twelve months, but 869 had joined within the first two months. And that was before CDOT contracted the community organization Go Bronzeville and the bike group Slow Roll Chicago to do outreach about the program on the Near South Side  and across the city, respectively.

In September, CDOT tried another experiment to encourage more people to give Divvy a spin. On three different Saturdays, the usual $9.95 fee for a twenty-four-hour pass was waived, thanks to sponsorship from T-Mobile. I pedaled around the West Side on September 19 and staked out several docking stations to see how residents were using the system, and ask what they thought of D4E.

At the Chicago/Kedzie station in East Garfield Park, I came across Divvy employee Michael Clark, who was cruising around with three friends, two of whom were trying the system for the first time. The young men, who live in West Humboldt Park and Lawndale, had just come back from a visit to Michigan Avenue.

Clark found out about his job, which involves cycling between stations to maintain the bikes, via a staffing agency about six months ago. “It’s a wonderful place to work,” he said. “We’re out and about. It’s good exercise, and you get to meet new people, ‘cause you’re outside all day.”

When I asked if they knew about D4E, Clark explained to the other men that the $5 memberships are available to single people who make about $35,000 or less. His friend Jonathan Smith said he heard about the discount through the Year Up Chicago job-training program, and now uses bike-share to commute to his job as a computer technician.

Duncan Timm, a welder, said it was the first time he’d heard of D4E, so there needs to be more promotion. “But it’s a great idea,” he said. “Not everybody is fortunate enough to be able to buy a bike.”

Over at the Lake/Kedzie Divvy station, a quartet of students from Holy Trinity High School were trying to check out bikes to ride on the Bloomingdale Trail. Unfortunately, they only had one credit card between them, and you can only take out two bikes per card. A man drove by and hollered, “They’re free today?” The kids nodded.

As I sat on one of the docks at the Lake/California Divvy station waiting for interviewees, a little girl in braids skipped by and said cheerfully, “I want to get one of those bikes.” Near the Monroe/Western station in United Center Park, several young children were cruising around on the baby blue cycles, even though the minimum age limit is sixteen. One tween carried his buddy on the front rack.

A couple blocks away, LaTonya Brown was pedaling a Divvy home from her job at a Navy Pier concession stand, sharply dressed in a rust-orange trenchcoat with matching lipstick. This was her second time taking advantage of the free days. “It’s been good, once I got the hang of using the smartphone app to locate the stations,” she said.

Brown heard about the D4E program from someone at a local community center, signed up for a discounted membership, and was given a Divvy key. But she was waiting until after the last free day to activate her membership, since it’s good for a year after activation. “I’m the first person I know who’s joined, but I’ve been telling lots of my friends about it,” she said.