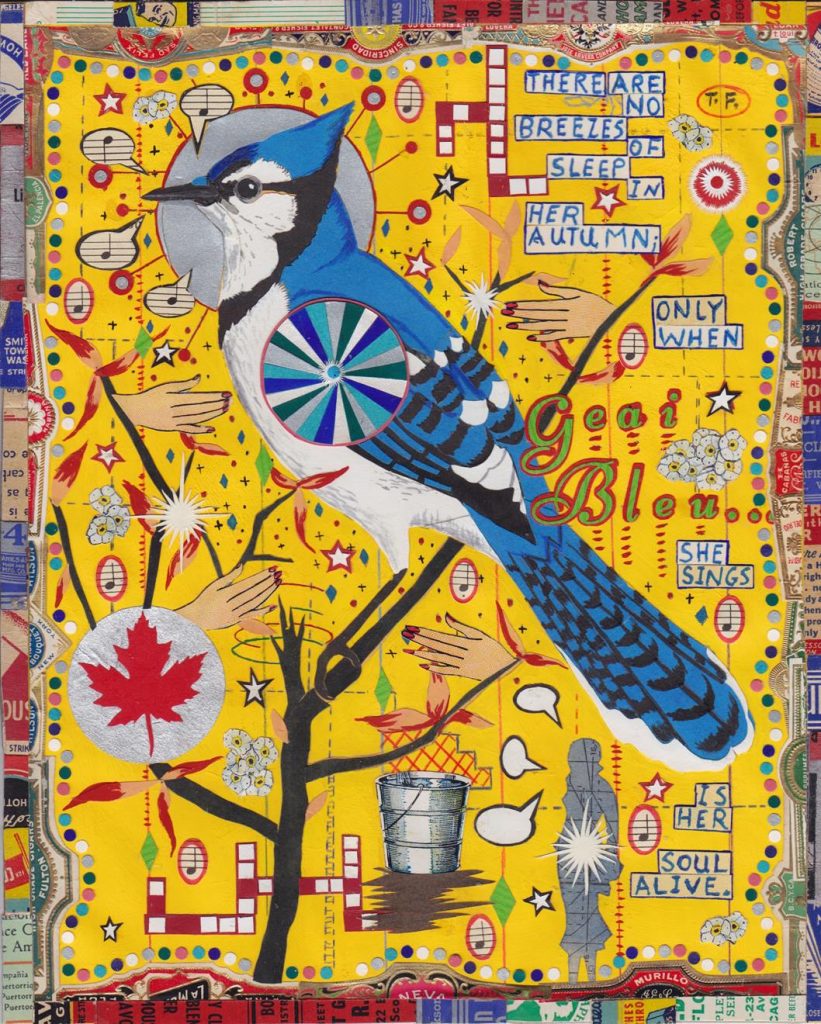 In early folklore, blue jays were thought to be hand-servants of the devil because of their noisy and boisterous nature. I remember them as a pleasant and mysterious part of childhood. The mystery being that I would see them everyday for a while (a week or so) and then they would disappear for six months until I’d almost forget about them and then they’d be back. I was always wondering where the fuck they went. They were the Houdinis of the natural world.

In high school, I had a job cutting grass in Queen of Heaven Cemetery during the summers. The place was full of pine trees and thus, blue jays. In fact, if you want to see a lot of birds, go to any cemetery. It is a relatively safe place for them. As accidental bird sanctuaries, they are a safe place to nest and enjoy relative safety from humans cutting down trees and shooting birds.

I kind of liked that job. I worked with lots of guys from Mexico and in the middle of the afternoon, one of them would hop the fence and go buy six-packs and dirty magazines. We’d hide our mowers and drink beer in the bushes and smoke cigarettes and take naps. It was great. Learned all of the dirty words in Spanish I could think of and met people from another part of the world who were nothing like me, except that we wanted the same things; to work outside and to be left the fuck alone.

I loved watching birds with these guys. They could imitate bird calls and told me in Mexico, at night, the birds turned into angels.

I also caddied as a teenager, at Glen Oak Country Club in Glen Ellyn, and right by the seventh tee there were nesting pairs of blue jays. Every once in a while they’d feel encroached upon and start dive-bombing the golfers. It was the funniest thing you ever saw—grown-ass men running away from blue jays with their drivers up over their heads. I never laughed so hard in my life. One golfer stamped his feet and declared the birds a menace and said the trees they were nesting in should be cut down. An older guy, a great old Southerner named C.J. Hart, said “Well we could always get you a helmet if you’re afraid the tiny blue jays will mortally wound you.” With that the whole foursome laughed at the guy and there was no more discussion of cutting down very old pine trees.

We damn near lost blue jays, crows and other bird species to West Nile virus a decade ago. Only now are these populations somewhat recovering. Blue jays are nowhere near as common as they used to be—nor are American crows. The sad fact is that until West Nile started actually killing people we didn’t give a fuck.

While it was wiping out whole bird populations we couldn’t be bothered with it. Once it killed a few people it became “tragic.” What should dawn on us is that these birds are literally the canaries in the coal mine. That when the environment for them becomes inhospitable, this bell also tolls for us.
I had to chuckle to myself when all of the Rahm people expressed shock and horror that he was about to kick the Titanic of Tax increases up between our cheeks. I want to grab them and look them eyeball to eyeball and ask them, “What surprises you about this?”

He knew he was going to do this when he was running against Chuy, and in every ad he ran against Garcia he painted a doom-laden portrait of the future under Mayor Garcia. It was a lot like Chicken Little running around the city clucking that the sky was falling. And sure enough the minute he got re-elected the poor and the middle class get a board kicked up their ass.

What is appalling is that Emanuel knew there would have to be a substantial tax increase and for purely political reasons chose not to inform the public. One also cannot let the public off the hook—we had to have seen this coming. The pension crisis, the schools, the morass of debt— did we think that overnight the city would be sprinkled with pixie dust and all of this would go away?

When Chuy ran he said that tax hikes were inevitable and Emanuel bludgeoned him with this: “The City Cannot Afford Chuy” became the campaign mantra. At least Chuy told us the truth. It feels like being forthright and honest is always Rahm Emanuel’s last choice.