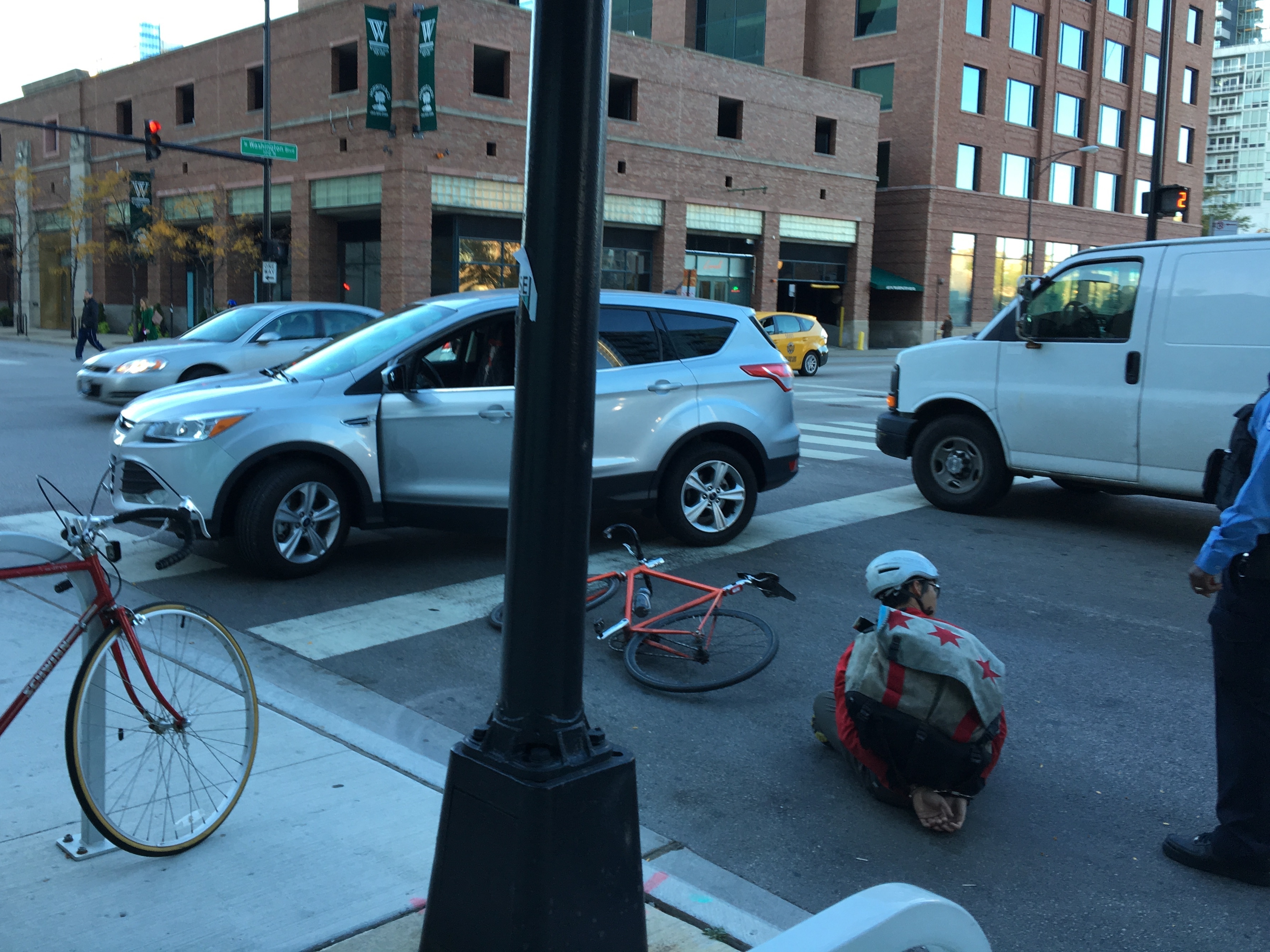 James Liu, who the CPD says was not actually arrested/Photo: Ben Raines

Picture yourself bike commuting downtown on Milwaukee Avenue, the city’s busiest cycling street. After you turn south on Des Plaines Street, the driver of a silver SUV starts edging into the bike lane as he tries to illegally pass other vehicles on the right in his rush to get to work.

The motorist is getting too close for comfort, so you knock twice on the door of his truck to alert him of your presence. Unfortunately, he turns out to be an off-duty police officer, and less than a minute later you find yourself sitting in the street with your hands cuffed behind you, and your orange fixie sprawled across the asphalt.

That’s what bankruptcy attorney James Liu, thirty-three, says happened to him on October 14 at around 8:15am, while he was trying to make his way to the office. “As soon as I tapped on his side panel, he immediately started chasing me, driving in the bike lane,” Liu says. “Around Fulton Street he rolls down his window and yells, ‘I’m a fucking cop!’ I just look at him and shrug my shoulders, and then we continue south at a normal speed.”

Liu says that when they came to a red light at Washington Street, he changed lanes to head east. The uniformed officer then zoomed across two lanes of southbound Des Plaines and stopped his SUV at a ninety-degree angle to traffic, blocking the attorney’s path. “It was a pretty dangerous move,” Liu recalls.

The officer then got out of his SUV and demanded that the cyclist stand in front of the vehicle with his hands up, the attorney says. When he complied, the cop handcuffed him and then called for backup. “I repeatedly asked whether I was under arrest and, if so, what I was being charged with,” Liu says, adding that the officer eventually told him he was under arrest for reckless conduct.

However, according to Officer Janel Sedevic from Police News Affairs, the cyclist wasn’t actually arrested, but merely cited. So why was he handcuffed? “You can handcuff someone [without arresting them] if you’re in fear for your safety, and a few other reasons,” Sedevic says.

Liu says there’s little chance that the officer was worried about physical harm. “I’m five-foot-eight and 140 pounds, and he’s about five-foot-ten and 200 pounds,” he says.

Sedevic says the attorney was charged with disorderly conduct and has a court date on Thursday, November 12, at 10am at the Central Hearing Facility, 400 West Superior. She said she couldn’t release the name of the officer, who reported that the cyclist pounded twice on his SUV, although he gave no explanation for what motivated Liu to do so. “We don’t give out the names of victims.”

However, Liu says he has the name of the officer, Paul Woods, from the citation. Ironically, it turns out that he works for the police department’s traffic administration department. Another News Affairs staffer told me officers are required to check in before speaking to the media, adding that News Affairs would not be able to accommodate my request for an interview with Woods.

Liu says that, judging from Woods’ phone call for backup, it appears the cop had been on his way to work when the incident occurred. Soon, a second officer showed up in a squad car to transport the cyclist and his bike to the 1st District police station near Chinatown.

There, Liu was taken to an intake area, where both officers examined the contents of his bag and pockets. “When I saw Woods, I said ‘Good morning sir,’” Liu recalls. “He said, ‘You don’t have to call me sir. I’m the same asshole I was on the outside.’” The attorney was released after about an hour.

Fortunately for Liu, UIC associate professor Rachel Havrelock says she witnessed Woods driving recklessly before he detained the attorney. DNAinfo.com reported that Havrelock was riding a bike at the time, and quoted her as saying it’s understandable that a driver might feel threatened by a cyclist knocking on his or her vehicle. However, the professor told me she was actually driving south on Des Plaines, taking her seven-year-old daughter to school, and she made no such comment.

“I saw the SUV driver swerving in and out of traffic and he seemed to be going after the cyclist,” Havrelock told me. “I was very shocked by what I saw. I said to my daughter, ‘That’s really dangerous.’”

When Havrelock saw Liu on the ground, she thought there had been a crash, so she parked nearby and went to the site with her daughter to offer assistance. She soon realized Woods was the driver who chased the cyclist. Havrelock passed her business card to Ben Raines, another bike rider who hadn’t seen the altercation, but stopped to help when he saw Liu handcuffed on the pavement.

There’s been an outcry from the Chicago bike community over the incident, with more than 120 comments posted on The Chainlink, a local social networking site. “Based on accounts from James Liu and the witness, the off-duty police officer crossed the line twice by driving in the bike lane and then arresting Liu,” Active Transportation Alliance director Ron Burke told me.

Liu has retained the civil rights firm of Loevy and Loevy to represent him in a lawsuit against Woods. “If we left this situation unaddressed, it would be sending the message that society tolerates this kind of behavior from a police officer, and that’s exactly the wrong message the CPD should be receiving,” attorney Russell Ainsworth says.

“What was the motivation of [Woods] to arrest James without lawful basis?” Ainsworth adds. “Because he got road rage and he got pissed, that’s why.”