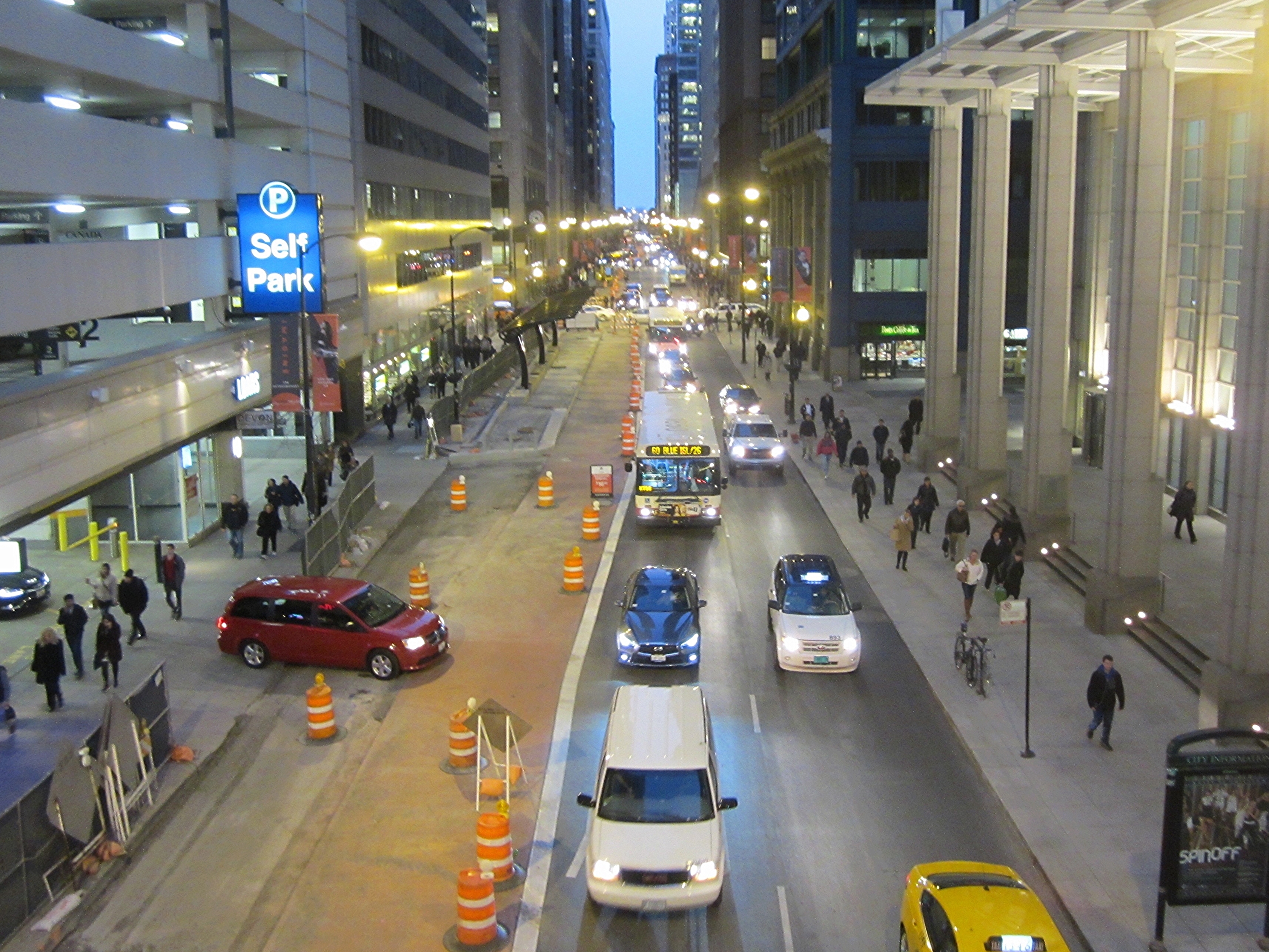 Maybe Madison Street, part of the Loop Link bus route, could be made car-free/Photo: John Greenfield

“I think we should look to countries like Denmark, and Sweden and Norway, and learn from what they’ve accomplished,” socialist presidential candidate Bernie Sanders said recently. That statement surely gave the Republicans hives.

One area where U.S. cities like Chicago should definitely look to Scandinavia for inspiration is traffic management. Last month, the newly elected city council of Oslo, Norway, announced that it plans to make the central city free of private cars by 2019. It’s part of a plan to cut greenhouse emissions in half within five years, as compared to 1990 levels.

“We want to make it better for pedestrians and cyclists,” Lan Marie Nguyen Berg from the city’s Green Party told reporters. The party won the September 14 election along with its allies from the Labor and Socialist Left parties. “It will be better for shops and everyone.”

European cities like London and Madrid charge congestion fees to drivers entering their downtowns, and others have car-free days in their city centers, like Paris did last September. But Oslo’s plan is said to be the first total and permanent ban of private cars in the center of a European capital. Streetcars and buses will continue to provide downtown access, and accommodations will be made for deliveries and people with disabilities, the three parties said in a statement.

The politicians hope to reduce overall car traffic in Oslo by twenty percent by 2019, when the next election will be held, and thirty percent by 2030. “In 2030, there will still be people driving cars but they must be zero-emissions,” Nguyen Berg said.

The initiative involves a “massive boost” in transit funding, subsidies for the purchase of electric bicycles, and the construction of at least thirty-seven miles of new bike lanes by 2019. In comparison, Chicago has installed 103 miles of bike lanes over the last four years. But since Oslo has less than a quarter of our population, their goal is the equivalent of the Windy City installing 154 miles of lanes.

While I’m not suggesting that Chicagoans will be swapping Italian beef for lutefisk any time soon, we would do well to consider a similar strategy for reducing congestion and pollution. I’m not proposing that private automobiles be immediately banned from all streets in the entire central business district, or even the Loop proper. But, along with my writing partner Steven Vance, I’ve brainstormed a few ideas about how car-free and car-lite roadways could make downtown travel safer, more efficient and more pleasant.

The city has already made some positive steps in that direction by repurposing asphalt in the CBD to make room for forward-thinking transit and bicycle projects. Two of the travel lanes on Madison and on Washington in the Loop have already been converted to bus lanes, island stations, and a protected bike lane as part of the Loop Link bus rapid transit corridor, which should debut early next year. The transportation department has also swapped car lanes on Dearborn and Clinton for two-way protected bike lanes. The city should continue to repurpose lanes for transit and biking, since these are much more space-efficient modes than driving.

Last winter, the Active Transportation Alliance floated a list of twenty Chicago streets that could be partially or fully pedestrianized to create more space for people to stroll, bike, shop, relax and congregate, including Michigan and Monroe in the CBD. The Mayor’s Office quickly poured water on the idea of a car-free Mag Mile, but the list got people talking.

Granted, banning cars from streets should be done with caution. The State Street pedestrian and bus mall, which existed from 1979 to 1996, wasn’t an abject failure, although pro-car types like to portray it that way. But due to the thoroughfare’s lackluster retail mix during much of that era, as well as tacky design elements, the mall wasn’t a big success either.

While pedestrianization may not be helpful for ailing business strips, it can make already-bustling retail and employment districts even more vibrant. Washington, which has two remaining travel lanes due to the Loop Link project, would be a good candidate to become completely car-free. The city’s last downtown pedestrian count, conducted in 2007, found that 31,600 people a day walked on Washington between Dearborn and Clark, while motor vehicle counts showed that this stretch only carries 14,300 vehicles per day.

Pedestrianization might also work well on Madison, as well as the LaSalle financial district between Jackson and Wacker. Of course, making just a block or two of each street car-free is a possibility, and access for buses, bicycles, cabs, people with disabilities, and deliveries should be maintained. Implementing a congestion charge for drivers entering the CBD would complement this strategy, and the revenue could be invested in better transit, walking and biking infrastructure.

Again, I’m not advocating for an Oslo-style ban on private vehicles in downtown Chicago. But while we can’t cram any more automobiles into the Loop, it would be easy to make room for people by converting more and more asphalt to car-free walkways, bus routes, bike lanes and plazas, so the city should boldly pursue this strategy. If we take a cue from the land of fjords, we won’t have to worry about traffic queues in the land of Fords.