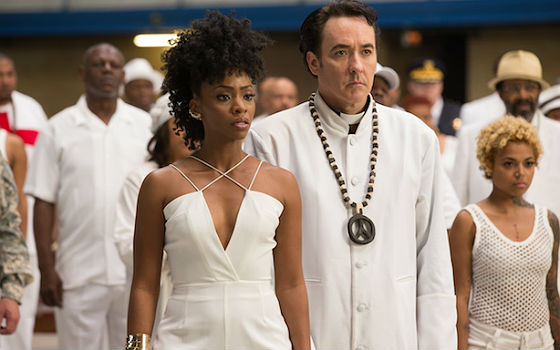 It is not every American actor who finds himself in a Moscow hotel room with Edward Snowden, Daniel Ellsberg and Arundhati Roy in a wide-ranging discussion about the nature of democracy, the ideas of personal freedoms and the devaluation of other cultures in the face of those lofty thematic structures. That Cusack and the author Roy fostered this conversation into being is doubly amazing seeing that Daniel Ellsberg was the Edward Snowden of his day—leaking the Pentagon Papers in the early seventies and laying bare our dark and dirty secrets regarding the Vietnam War as well as the surveillance of American citizens perpetrated by the Nixon White House. Sound familiar?

It was also Ellsberg who was accused of the most egregious acts of espionage when in fact his actions, in the historical rear-view mirror, were actually a transformative act of citizenship. The conversation is riveting—for once we get to hear Snowden in his own words explain why what he leaked was a necessary and moral act of civil disobedience.

This conversation occurred last December within spitting distance of the Kremlin. Cusack and Roy shaped it into salient, sharp and provocative conversation—”Things that Can and Cannot be Said” one of the greatest things I’ve read—ever. You can read it here: alternet.org/world/john-cusack-and-arundhati-roy-things-can-and-cannot-be-said

It’s been an interesting year for Cusack—besides this landmark conversation, he has issued two of the year’s best performances in films, the first being a halting, fearful portrayal of the Beach Boys’ Brian Wilson. It is Oscar-caliber work with Cusack taking Wilson’s fragile genius and shining a light on it in “Love and Mercy.” The cast is rounded out by Paul Dano, who is equally stellar as the young Wilson, and Paul Giamatti as the slimy Eugene Landy, a manipulative snake-oil therapist complete with a douchey haircut. As well as Elizabeth Banks, who begins the picture by selling Wilson a Cadillac and winds up setting him free. It is one of the few musical biopics I’ve seen that captures the joy of making art—and the tenacious journeys Wilson took to perfect each of his songs and compositions. Cusack is letter perfect in a luminous embodiment of Wilson’s relentless hope and optimism.

His other standout role came in Spike Lee’s controversial “Chi-Raq,” which I also appeared in. In it, Cusack plays a Catholic priest based very much on Father Michael Pfleger, the pastor of St. Sabina’s Catholic Church in the South Side’s Auburn/Gresham neighborhood. It is a performance that channels not only Pfleger, but the antiwar activist priests Daniel and Philip Berrigan, who were close friends of Cusack’s parents. What is stunning about the performance is the fury Cusack locates in the heart of the man who is essentially a pacifist. There is an underlying anger about those who fight in the name of all but lost causes that Cusack is able to call upon at will and translate—his sermon hits us like a freight train. It’s worth mentioning that for all of the tragedy in “Chi-Raq,” the film itself never gives in to the nihilism of the gun culture, in part because of Cusack’s performance. When he pleads with the lead character to accept responsibility and tells him that he loves him and God loves him, it is a moment that passes and lands like regretful rain. There is a sadness that moves across Cusack’s face like a glacier: He has not reached this young man in time and the tragedy that precedes this and follows this is a very old story for his character, Father Corridan. Cusack took this role because Spike Lee told him the best reason to do this was to try to save lives.

The naysayers may be uncomfortable with the mythological underpinnings of the play “Lysistrata,” but believe me they are even less comfortable with the grim murder numbers and the light being shined on them. It speaks to our city’s trenchant lack of self-esteem that the reactions are so outsized and visceral. I think of this film as a masterpiece of agitprop—unruly, unwieldy, unpredictable and damn near impossible to ignore. Lee goes very hard on black-on-black violence and pounds home the facts that this genocide is as much self-inflicted as it is a result of racism, classism and City Hall’s neglect.

Cusack’s priest knows these burdens and carries them—he is as much a tragic figure as anyone in the film and it is to Cusack’s credit that his character resonates so deeply.

I’m not really an objective observer of John Cusack. I’ve known him nearly thirty years and each time I see him again—sometimes after eight or ten years—we pick up the conversation. I’ve always admired that he went where his curiosity took him and that he was possessing of a restless and searching intellect. One of the best things to do with Cusack is to watch baseball—he is a lifelong Cubs fan and watches the game the way most people read a novel. He appreciates that each game is a narrative and it unfolds like nine chapters of a book; it is a story slow to reveal itself. Much like this actor—the last year was an indicator. Cusack will go where the ideas are.