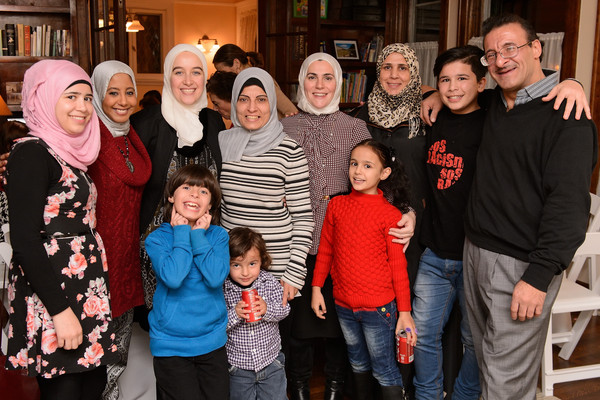 The world is witness to the largest refugee crisis since World War II. More than four million Syrians have fled their country and nearly eight million are displaced internally, mired in a violent and unending civil war. Each year Illinois welcomes 2,000 refugees from around the world and is prime to lead in the refugee resettlement crisis. While the Obama administration and state and conservative leaders spar over plans to resettle at least 10,000 Syrian refugees into the U.S. by the end of fiscal year 2016, 131 Syrian refugees have already started their new lives in Illinois. More than two-thirds of those resettled are now Chicagoans.

Suzanne Akhras Sahloul, a local activist, recently founded the Syrian Community Network nonprofit to help newly arrived Syrian refugees successfully transition to life in America. Since January 2015, Suzanne has been on the ground running. She leads efforts to fight rising xenophobia and anti-refugee rhetoric through advocacy with local and national political leaders, as well as to help families in their transition to life in Chicago. “I wish there were thirty-six hours in a day,” she says.

What is the Syrian Community Network’s core work in Chicago?
We team up with resettlement agencies as both partners and mentors for recently arrived Syrian refugees. Imagine you are a refugee in a new country with a different culture and language. Nothing is as welcoming as a homecoming with visits from a mentor who speaks the same language and can offer advice on community services tailored to your needs. Also, we provide training programs on American culture to refugees and Syrian Culture 101 trainings to members of the community who will be assisting refugees right away. We are a part of events like MoveOn.org’s Thanksgiving dinner and our community Eid celebrations.

Were you involved in any past refugee resettlement programs in Chicago?
When Iraqi refugees arrived in Chicagoland, I noticed a lot of gaps in community services after the actual resettlement—Iraqi refugees were really lost and lacked a strong support system to help them adjust to their new country. I knew that if there was ever another crisis, we needed to respond differently. So I wanted to create an organization that focused on easing the frantic hardship of immediately securing jobs, paying rent and integrating into a new society. As an organization we see a huge value in building bridges between newly arrived Syrian refugees and the local Syrian American, Arab, Muslim and Chicago communities to ease these difficulties.

What are the major challenges newly arrived Syrian refugees face in Chicago?
There is always the major issue of how to navigate a new system in a new country. Rather than having time to adjust to moving to a new country, refugees out of necessity have to quickly find a way to have an income and pay their bills not knowing who exactly is trustworthy. In that vein, I have seen some refugees struggle with maintaining jobs here. For instance, they may have been a manager in Syria, but here due to language barriers they only find work in manual labor. This drop in social status can be shocking. Also, I have noticed some cases of PTSD in refugees still dealing with the trauma of war. In many ways, I see how refugee children are so adaptable to starting life again, while adults can struggle in building careers and new community.

Do you find recently resettled refugees yearn to return to Syria?
There’s always in any immigrant or refugee community this dream of returning to the home country and I hear this sentiment in the Syrian refugee community. When my own parents immigrated to the U.S. when I was ten years old, Syria was an idea that was always on their lips and in their minds. However, I can’t imagine that this recent wave of refugees will go back after settling in Chicago. This is one of the hardships of being a refugee from one of the Middle East’s unstable, ongoing wars.

Why is there a rising fear of Syrian refugees in the U.S.?
People have a fear of the unknown. We don’t know who these people are and there is a complete media and political focus on ISIS. But refugees are mothers, fathers, daughters, sons and victims of war. We seem to have lost the human story behind why people become refugees and that’s what we need to bring back to coverage of the crisis. An emphasis should be on the devastation that comes with ongoing shelling, barrel bombing, persecution and the severe economic crisis that causes refugees to flee.

After November’s Paris Attacks, Governor Rauner and about thirty other governors rejected the resettlement of Syrian refugees in their states. Have you seen any changes in resettlement in Illinois since then?
It’s very political now, but states do not have the legal authority to block refugee resettlement based on nationality or religion. However, they can effectively create an unwelcoming or hostile atmosphere to new refugees. Resettlement is a federal, not state issue despite political opinion.

What has been the greatest success of the Syrian Community Network in Chicago?
Our greatest success is that we are a voice for the refugees in Chicago. When media outlets want to reach out to the Syrian refugee community, we connect them and help refugees tell their own stories so their experience is shared around Chicago and the world.

People often wonder in a crisis like the Syrian civil war, what can one individual person do to help. What are some tangible ways to get involved?
Start by visiting our website and filling out a volunteer form. We need individuals who want to tutor, mentor, translate and help just drive refugees around as they get to know the city. Please donate funds to help organizations like us continue our programming and expand to hire more specialists. Write us to speak at your churches, synagogues, mosques and places of worship or community groups. Promote refugee issues on social media and in your networks as raising awareness is incredibly important and simple to do. Even if you want to just invite a refugee family to dinner at your house, give us a call.