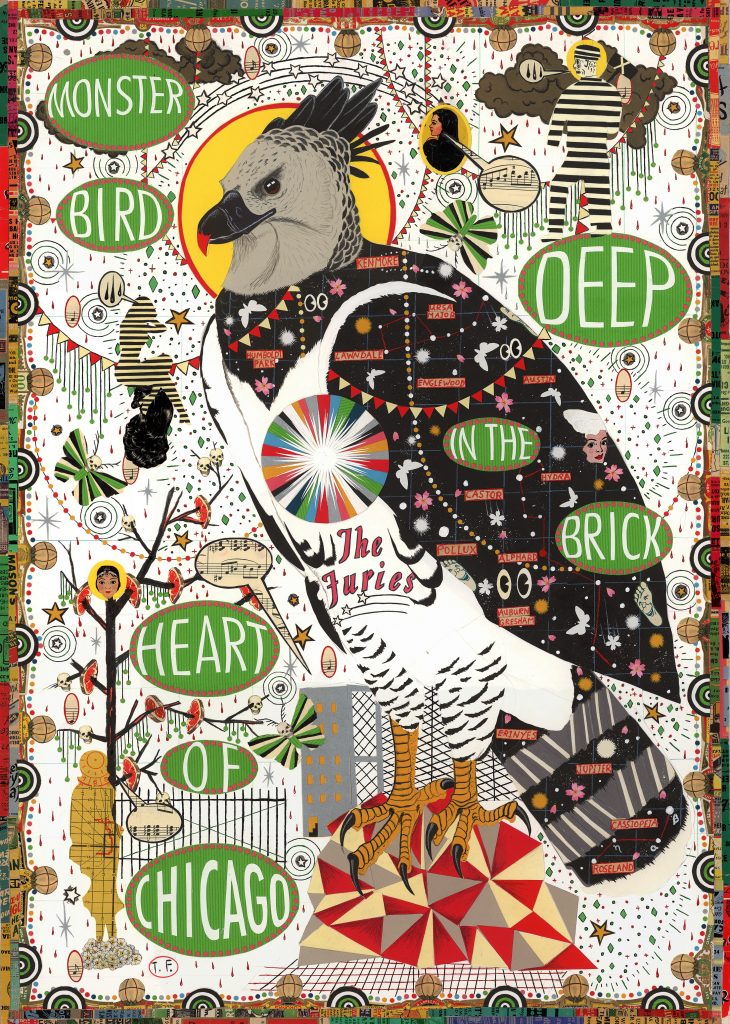 The harpy eagle, the largest eagle in the Americas, lives high above the jungle canopy in Central and South America, at the top of the food chain. Centuries ago the Incas and the Mayans worshiped these birds. They can pretty much eat whatever they want. It doesn’t matter if you are a sloth, a howler monkey, a small deer or a dog. Once a harpy sees you, God forgot you.

In the city of Chicago, we lost 450-plus people to gunfire in 2015. Politicians, real estate developers and cops are pretty much at the top of the food chain. As evidenced this year, the cops can pretty much kill whoever they want and the politicians will rationalize it and provide cover. It is a city of killers. But unlike the harpy eagle, the city devours its own.

It must be empowering to be so confident that no amount of vitriol and discouragement can blunt the luster of one’s bright self image. Our mayor seems to be one of those cock-eyed optimists who thought the people standing out in front of his house were there to welcome him home from Cuba. It brings to mind a kid happily wading through a barn full of horse-shit thinking,”All of this horse pucky!?! There MUST be a Pony in here somewhere!!!”

It is either this or the wee one is impossibly tone-deaf, which isn’t likely. He’s never drawn a dumb breath in his life, unlike his predecessor, whose lips moved when he read the comics.

No, Emanuel is playing the odds. He figures he’ll survive this if he throws enough human sacrifices under the bus. I won’t say Garry McCarthy didn’t deserve to go—he did. The cops who murdered Laquan McDonald were clearly feral and out of control. When you are the chief of police, this cannot happen on your watch. To quote McCarthy himself, “You lead from the front.”

What I’m curious about is why the other cops in this hateful piece of videotape are still on the police force. They have to go—all of them. The rot in CPD is deep and has its roots in the first Daley administration. It’s been open season on citizens of color since there was a city of Chicago. McCarthy inherited this, and for the culture of CPD, he cannot be blamed, or for the Fraternal Order of Police, who blanketly condone every officer-involved shooting. The way to tell if they’re lying is easy: their lips are moving. At the time of the McDonald shooting they were claiming it was justified. They are CPD’s citizen goon squad, and they’ve been enablers for this hateful behavior for decades.

The Department of Justice is launching an investigation into CPD. Here’s hoping they carefully examine the communication between the police, the state’s attorney and the mayor. If they do this and DON’T indict Emanuel for obstruction of justice, I won’t be surprised, I’ll be amazed.

This tape was quashed for 400 days—more than enough time to hold an adequate “investigation.” Cook County State’s Attorney Anita Alvarez—who will be stomped in the next election by Kimberly Foxx—tried to bury this tape until the mayor and perhaps she herself were safely reelected. This smells like obstruction.

On New Year’s Eve, City Hall finally released the emails and communications issued during the “investigation” of the Laquan McDonald killing—it seems more like a highly intricate exercise in ass-covering than an actual investigation. The emails are more concerned with how to inoculate Emanuel from responsibility than to do justice. What can one say about a politician who helps secret away evidence of the death of a child, in order to stay in office?

Alvarez, like Emanuel, refuses to step down; they are made of much of the same stuff and will fight like stabbed badgers to keep their hands on the lever of power. She’s sunk and though the mayor may not be aware of it yet, so is he. It has already happened. He will not ever experience anything resembling the public trust again. If he’s honest he knows this already. The Emanuel legacy is just a grease stain where he used to be. When he looks back on this—if he does such things—he might wonder when it all unraveled. I know exactly when it happened.

Some will think it happened when everyone from op-eds in the New York Times to Al Sharpton called for his resignation. Both President Obama and the Clintons have let their silence imply support for the mayor, which both camps will regret. I was on the fence about Hillary Clinton, but her support for Emanuel makes it clear to me that in her world political clout trumps anything like morality, or justice. I can’t ever vote for her. It also disappoints me that Obama has not asked Rahm to step down. It’s clear that they believe that this is their world—we just live in it and only to service them. All of this may have given the mayor the idea he’d survive this, and if he does, he spends the rest of his term as an empty suit, a sneering ghost who nobody wants in office anymore.

It became clear the moment he issued his tearful mea culpa at City Hall. The people of this city, particularly those of color, weren’t buying it. His tears and their loss and pain are NOT the same thing; the suggestion that an “I’m sorry” somehow constitutes a moral equivalency with a boy laying in the street with sixteen pieces of lead in him is foul, offensive, incoherent and immoral, and it lit a bigger fire.

The protests were peaceful, yet forceful and the message was acutely clear: Mr. Mayor, you have lost this city.