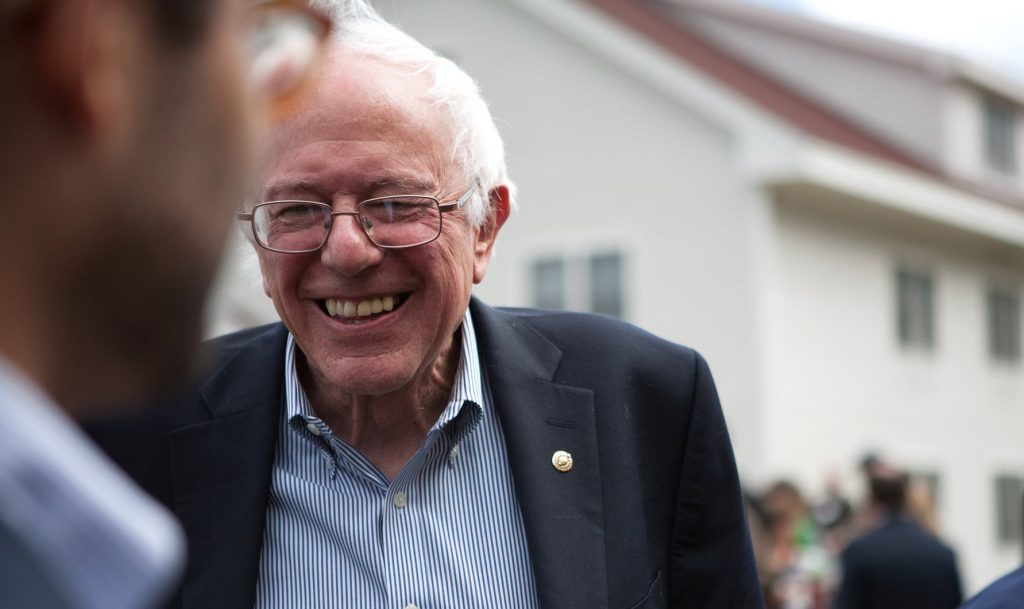 Well the Iowa clown car has emptied and the good news is the only candidate who seems remotely presidential damn near ran the table. Two days ago, the pundits and talking heads on cable and network news were saying that if Bernie Sanders got twenty percent he’d be exceeding expectations. As usual the pundits have underestimated the appeal of Senator Sanders. I don’t understand why; considering the collection of dolts, dumbbells, dimwits and simpletons on the GOP side of the ballot, this should be a cakewalk if you are a sentient voter whose head does not glow in the dark. The Republicans elevated the truly loathsome Ted Cruz to the top of their ticket, though he didn’t beat Donald Trump by much—it seems the evangelical voters liked Cruz more. The real horse to watch in that race is Marco Rubio, who stealthily crept into third place in the derby of mental defectives.

It was Sanders’ night, who defied the odds and proved that his message has real gravity for working-class and poor people. I’d also say he has cut a healthy slice of the upper-middle-class vote for himself as well. There is something about the guy that speaks to the American sense of fair play. He speaks of the American promise as if it is available to everyone. I realize that politicians campaign in poetry and must govern in prose, but Bernie has been so unabashedly consistent it is hard not to find this political revolution welcome.

As far as Hillary Clinton goes, I’d like very much to see a woman elected to the presidency. It isn’t like we have a shortage of credible, honorable candidates; Elizabeth Warren and Dr. Jill Stein are a couple of names that come to mind. Hillary has always been a bit too cozy with Wall Street for me and when she tries to cop some of the credit for the Affordable Care Act I find it, at the very least, disingenuous. I also bristled at her support for Rahm Emanuel in light of the Laquan McDonald tragedy and tape. While leaders from around the country suggested, and in some cases demanded that he step down, Hillary played politics, only to back away from support for the mayor a couple of weeks later. This tells me all I need to know.

It was Bernie’s night and his gracious speech at the end of the night put a heartening coda on the first of the primaries. I’m not even going to pretend I’m unbiased… Feel the Bern!!!

As for the GOP? While the top of the dungheap was occupied by Cruz, Trump and Rubio, the supporting players in this fractured fairy tale continue to entertain. Dr. Ben Carson got 9.3 percent, Rand Paul around four or five percent, Dead Man Walking Jeb Bush got 2.8 percent, Fiorina 1.9 percent, Kasich 1.9 percent, Huckabee and Christie—who had to have made the Krispy Kreme shops very happy—got about three percent between them, and Santorum one percent and some guy named Gilmore who, I swear to God, I didn’t even know was running—got zip.

Gee, you think it’s time for some of these Bozos to give it up?

About the only positive thing you can say for Donald Trump is that he saved us from another possible Bush presidency. At the end of the night, Jeb looked like he’s been rode hard and put up wet. The other clowns babbled the usual shit about being drowned out by Donald Trump.

As much as I’d like to think this was the death rattle of Trump’s campaign, it is far from over. He didn’t lose by much at all and, as much as I’d like to believe he was “schlonged,” he still has an unfathomable appeal to idiots. He talks like a roll of toilet paper and it gives the monosyllabic hope: I think they look at the Donald and think:

“I’m an imbecile, I hate Muslims, I hate immigrants, I hate women… Hey! This is great! I can be a billionaire, glue some piss-colored cotton candy to my head, And then I can be president!!!” He is the beacon of hope for dipshits, mouth-breathers and shit-kickers who consider gophers “cuisine.” Morons for Trump!

I guess what I dislike about Trump is how much his appeal depends on disparaging others, and I want to hand some back. His platform, if one can call it that, calls upon us to hate and distrust all who are not like us, or more specifically, like him. He entreats the most un-American of instincts in the body politic. I have very deep personal reasons for treating him with such contempt.

He hates immigrants, Muslims and Obamacare.

A year ago my heart was repaired by Doctor Khaled Abdelhady, an Egyptian immigrant and devout Muslim. Abdelhady took my heart out of my body and made it work again. He also spent a great deal of time comforting my family. I owe him a debt I can’t ever adequately repay.

I was also covered by the Affordable Care Act, and had I not had Obamacare, I’d have never called the ambulance.

So in a very real way I owe my life to immigrants, Muslims and Obamacare.

Mr. Trump does not speak for Americans. Or any America that I am part of. He does not realize the weave of races, creeds and colors it took to make this republic great. Fifty years ago, he wasn’t marching with Dr. King.

Bernie Sanders was, and this tells you everything about who he is.