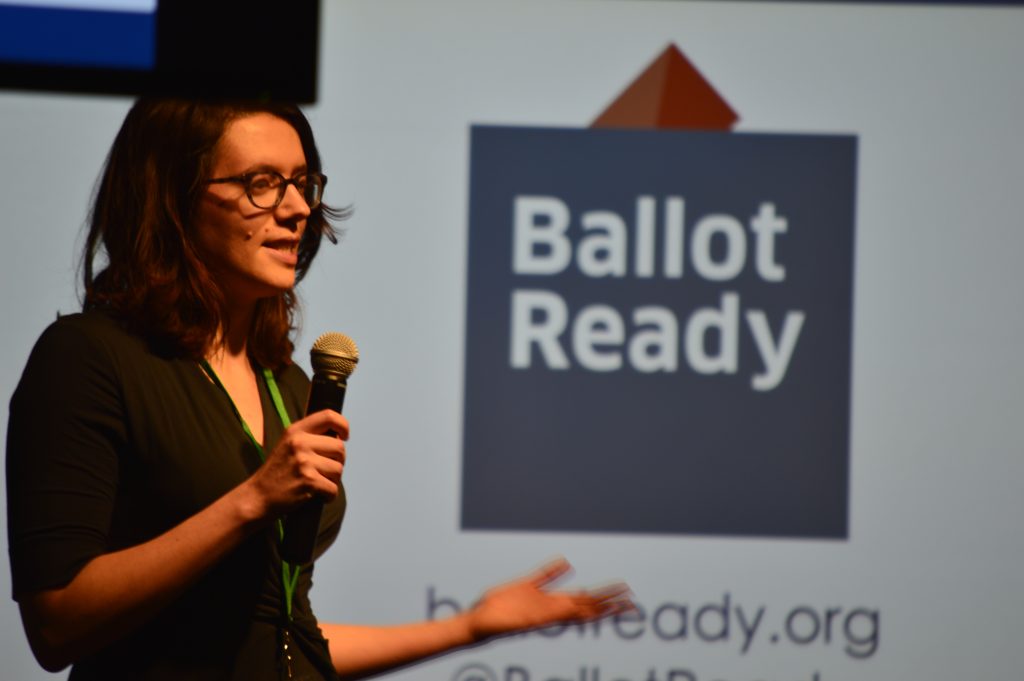 Aviva Rosman and Alex Niemczewski, two of the minds behind Chicago tech startup BallotReady (ballotready.org), bet you’ve done it before. Scanning the hundreds of names on a ballot, you’ve randomly voted for unknown candidates. Outside of presidential and congressional candidates, they’d wager you don’t know the policy stances of the unheralded yet powerful local elected officials, such as the recorder of deeds or the metropolitan water reclamation commissioner, who reside lower down on the ballot.

You’re not alone. Rosman and Niemczewski have found professors and high-level startup-competition judges from the University of Chicago who have also admitted defeat in navigating candidate choices among little-known school council members and judges who wield immense power over the city’s day-to-day life. Rosman and Niemczewski believe most people are guilty of guessing or leaving a portion of the ballot unfilled and that’s what they are here to change. “We’ve never met someone who has said, ‘I wouldn’t need this app. I know everyone on my ballot,’” Rosman says. 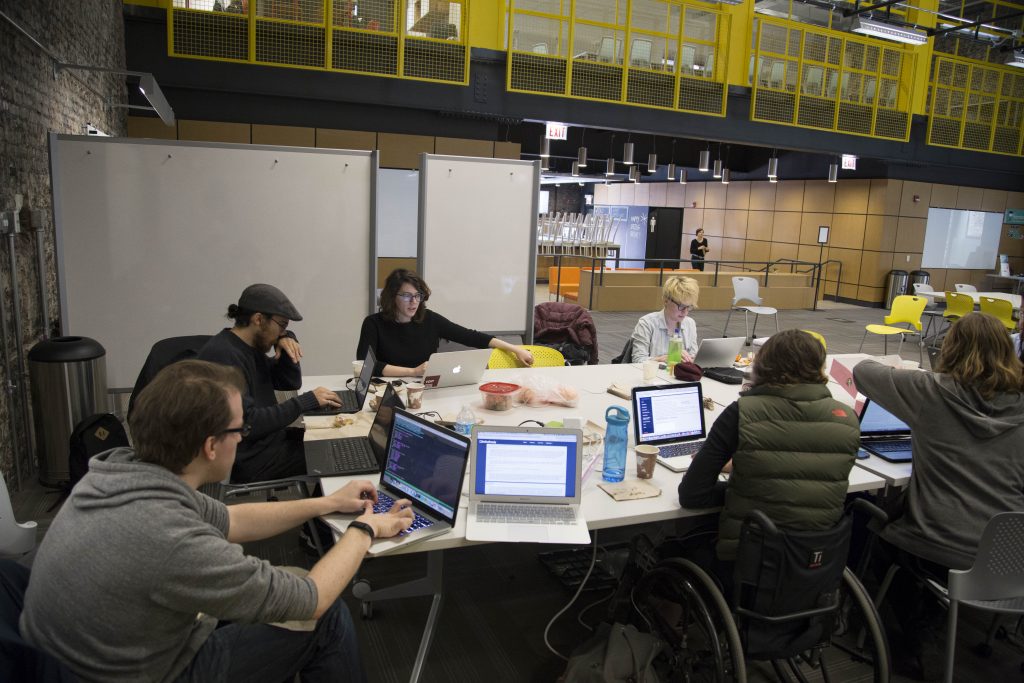 Data-driven and bipartisan in a politically polarized America, BallotReady hacks democracy through its abundant offering of high-quality information on a simple, usable online platform for voters. The startup aims to even the playing field; large campaigns and cash-strapped candidates all have a bio, along with their position on issues from which users can build a ballot. All eyes are set to Illinois’ March 15 primary where the website currently has 645 candidates up, including, of course, those running for President of the United States. Younger voters, who are among the lowest in voter turnout rates, according to the Chicago Board of Election Commissioners, may be swayed by BallotReady’s digital accessibility.

Launched out of the University of Chicago’s Institute of Politics in December 2014, BallotReady aggregates and reports unbiased information on candidates at the local, state and federal level in an easy-to-use website where users can compare candidates’ policies based on issues ahead of elections. The for-profit company, which plans to derive revenue by selling campaigns voter-behavior data and ad space on the website, has the idea to increase overall civic participation in local elections by putting high-quality, unbiased information in an online platform that voters will actually use. After entering a zip code and address, BallotReady allows users to review information on all candidates specific to their specific ballot based on issues and save their voting choices to take with them to the ballot box.

The result: a digital, pre-prepared ballot ready for the voting booth March 15 prepared by an informed voter. BallotReady’s goal is to reach a million voters this year, a huge opportunity with America’s eyes set on the 2016 presidential race.

“We want to make sure that when people enter the voting booth this year in the primary and November elections, they are informed not only about who they want to vote for president, but they are also informed on everyone else down their ballot,” Rosman says. 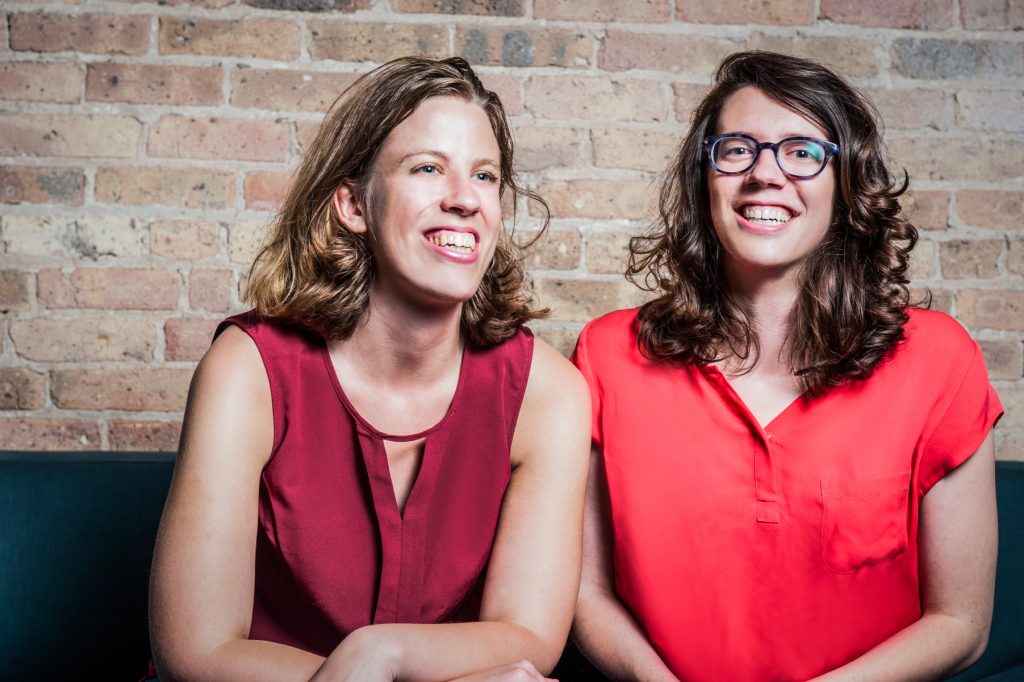 Part of the problem is people have little context for and knowledge of locally elected officials, Rosman believes. “They know what Donald Trump and Hillary Clinton stand for, but they might not know what their aldermen are in charge of. So even now, we continue to think through how do we create the best site possible that makes it easy to make a decision.”

BallotReady’s appeal goes beyond its personalized digital ballot; candidate data points morph based on the office’s relevant issues. A quick preview of the site shows that for state’s attorney office, Laquan McDonald and juvenile justice are key aggregating points. For Senate, LGBTQ, NSA/surveillance, abortion, military and diplomacy are easily reviewable. A representative’s stance on military intervention with ISIS or how to best solve America’s student-loan debt crisis are at users’ fingertips. BallotReady’s interface of issues adapts to each political office with some common threads.

As Niemczewski sums it up: “The issues are different for every race and each position. The issues for aldermen are different from water reclamation commissioners. Look a little deeper and the issues of aldermen in my ward versus your ward are different and that gives you a sense of the power that these locally elected officials hold.”

BallotReady has found its appeal to users goes across party and generational lines. “It’s fun to have a startup that older and younger voters really like and that crosses generational lines. People who are eighteen are excited to vote for the first time. We were in Kentucky and a dad gave his son our flyer and said, ‘You’re going to need this.’ I get emails from eighty-year-olds complimenting our site updates, which is a group I normally don’t interact with,” says Rosman. 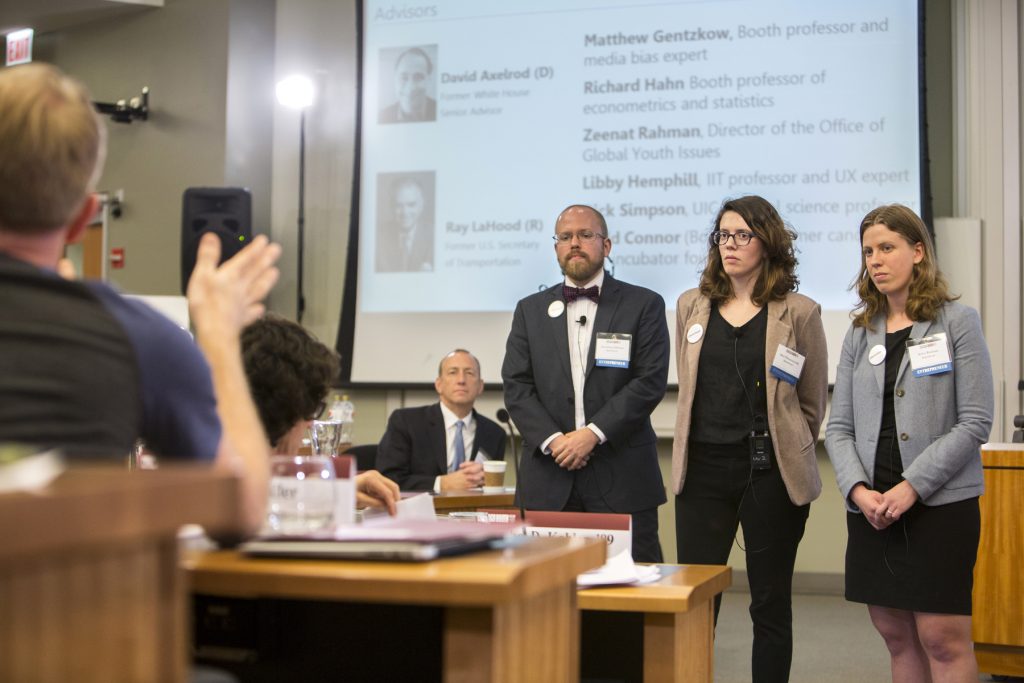 Professor Robert Gertner, faculty co-director of the Social Enterprise Initiative at Chicago Booth, found that BallotReady was unlike almost every other project that entered the incubator in its direct appeal to faculty, coaches and judges who themselves were targeted customers and beneficiaries.

“We have very little of selling social enterprises to the staff and judges involved in the Social New Venture Challenge,” said Professor Gertner referring to the large number of startups targeted at making social improvements on the international scene among vulnerable populations. “It’s pretty rare that our community is a target customer. But for BallotReady they are. It’s an interesting distinction from other projects.”

Professor Gertner believes BallotReady’s knack for raising awareness of local elected officials will have an impact on real reforms for voters of all ages. “It’s nice that one of the things that is front and center for their next pilot, the Illinois primary, is the state’s attorney race because I believe that is in fact one of the best mechanisms for seeing some real reforms in mass incarcerations and police brutality. Lots of really big problems that we face are through these prosecutors as they have massive amounts of discretion.” BallotReady, he believes, can play a big role in the Illinois primary and national elections as an easy way to filter through the biased noise surrounding U.S. elections.

BallotReady used winning the competition at America’s premier university startup incubator—ranked fourth nationally, just behind Techstars, among independent accelerator programs by Seed Accelerator Rankings Project—as a springboard to gain more funding. BallotReady raised $125,000 from places including the University of Chicago Institute of Politics, The Knight Foundation and the Chicago Harris Center for Policy Entrepreneurship and the National Science Foundation, which funded coverage in Kentucky and Virginia October 2015 elections. Former Obama presidential advisor, the Democrat David Axelrod, and former Secretary of Transportation, the Republican Ray LaHood, are two members of BallotReady’s bipartisan board.

Niemczewski, BallotReady’s chief executive officer, started the first website prototype in the summer of 2014 and Rosman, the company’s chief operating officer and now a graduate student at the Harris School of Public Policy, was the first person she called. A level of trust and friendship sparked in their dorm during Niemczewski’s sophomore and Rosman’s freshman year at University of Chicago. Rosman remembered how Niemczewski convinced her to attend her first party. “I wasn’t sure I wanted to go. I think I said something like, “But I’m a University of Chicago student, I don’t go to parties.’ Yeah, we are both pretty nerdy,” says Rosman. 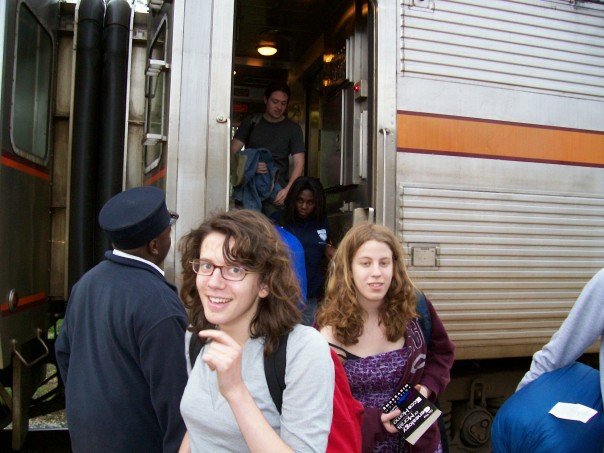 On the campaign trail

But Niemczewski’s intuition on including Rosman as a cofounder for BallotReady’s initial team ran deeper than friendship—Rosman is an elected official on her local school council and a self-described political-phile who began working on mid-Atlantic campaigns in middle school and remembers knocking on doors with her father as a child in the New Hampshire primary season. Next to join was Ellefson, a fellow University of Chicago grad who had an unrivaled obsession with local politics, a knack for organizing user-friendly web data and the city’s four stars tattooed on his arm.

After setting up a small pilot for Chicago’s April 2015 mayoral runoff election with just $180, the team knew they were on to a winning startup. “We didn’t tell any of our friends. We just wanted to test out marketing, content collection, usability. It went well and we got great feedback,” Niemczewski says.

Now, BallotReady is onto bigger challenges. BallotReady plans to offer nationwide data on all elections one day. Last year, the startup expanded from Illinois to cover elections in Kentucky and Virginia where more than 20,000 voters nationwide visited the site.

“After the Illinois election on March 15, we are going to cover a couple of other primary elections throughout the year and at least seven states for the election in November. Our mission is to eventually cover every candidate in every election in the U.S. This year we will see coverage of seven states including Illinois, Kentucky and five swing states,” says Rosman.

Users from last year’s elections ranked the usability of the website 4.4 out of 5. The team says they are always watching metrics and coming up with new ways to make the site even more user-friendly in line with their mission to provide easy-to-access unbiased and abundant data on all candidates across party lines. Figures are promising so far for 2016: BallotReady’s new site has been up only one week and has more than 2,800 users. For now, BallotReady is accessed through a mobile-friendly web site rather than a dedicated app.

“We’re not building an app yet because we don’t think people will want to take the time to download an app to use a couple times,” says Niemczewski. “We want it to be as easy as possible to find the information when you’re in the voting booth or beforehand, so we think a mobile-friendly site is the fastest way to do that.”

Data collection methods that populate the site with its policy stances and biographical data on candidates are changing too. The team is moving from a manual data-mining system, organized largely through volunteer “hackathons” at universities such as IIT, ISU, DePaul and Eastern Kentucky University and the coding community tech hub BLUE1647 in Englewood. BallotReady has found pulling out the information from candidate websites by hand time­-consuming and deciphering which parts of the biographical information relevant and stances difficult to update regularly.

Instead, as BallotReady scales they plan to use automated data-finding processes where natural language processing and machine learning will gather more candidate data for the website. With help from University of Chicago and University of Colorado Boulder Computer Science programs, BallotReady believes they will get more and faster information on candidates and therefore, cover more states.

In January, BallotReady was named one of three Chicago startups representing the city at the regional 1776 Challenge Cup competition, part of a global incubator tournament for startups determined to solve today’s major challenges. The regional Challenge Cup takes place in New York on March 3. If they move on, they have to apply their model for the global Challenge Cup on an international scale. This is something the team would be happy to do “as long as they are democracies,” says Rosman.

The team behind BallotReady believes their life’s mission is to build a more robust democracy especially on a local scale. “The president has the power to sign a deal with Iran. That has a very big macro effect,” Rosman says. “But your day-to-day life—which is your property taxes, your schools, your water quality, health care facilities, mental health clinics—those are all affected by your local elected officials.” 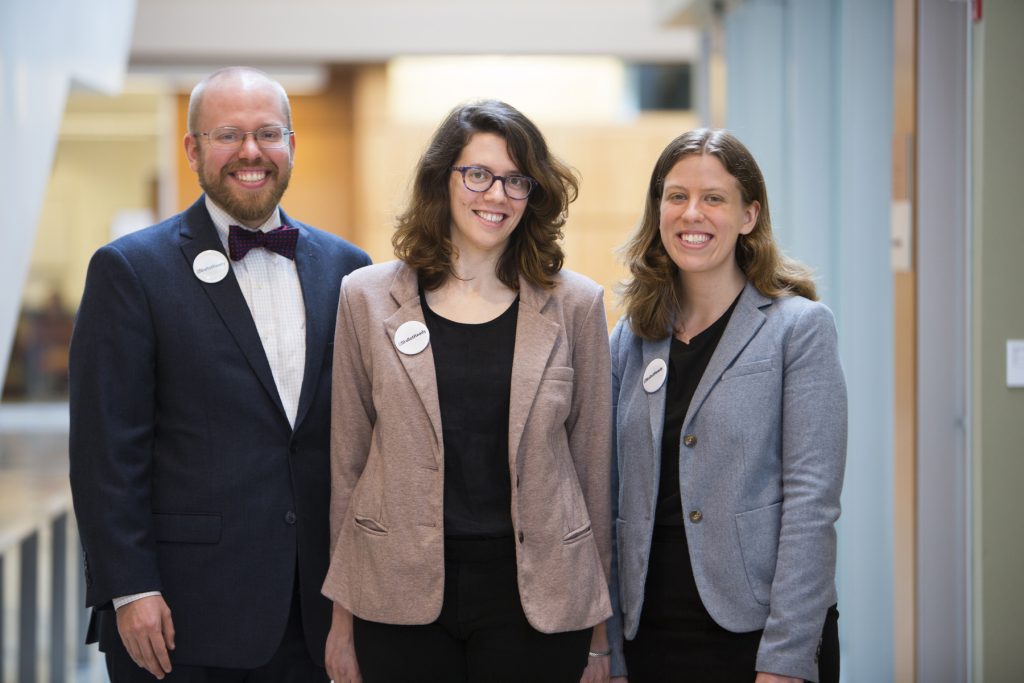