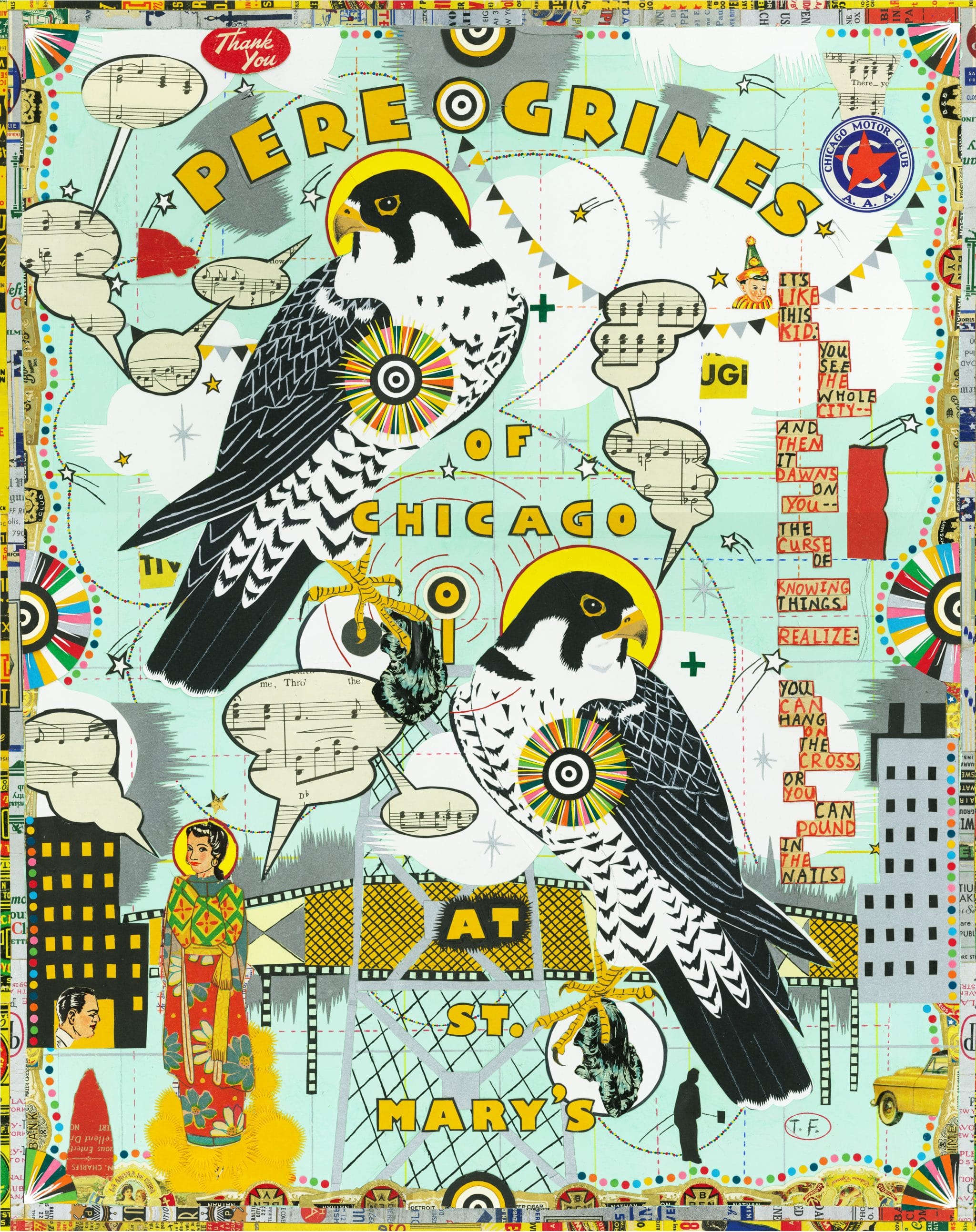 There is no faster animal on earth than a Peregrine falcon. They can drop at 200 miles per hour and have been clocked even faster. Often they hunt by turning themselves into a missile from great heights and hitting their prey with their breastbone. I saw this occur right outside of Daley Center once. I happened to be looking up just in time to see this explosion of pigeon feathers about a hundred feet up; like a flutter of paper in a mad house. The luckless pigeon fell to the  ground and the Peregrine landed a few moments later, spreading her wings over her kill and feasting. Daley Center was full of people who just knew to walk around the feeding raptor and stayed about ten feet away in all directions.

Thirty years ago, Peregrines were on the endangered-species list—DDT and habitat destruction being the culprits. Through the efforts of Cornell University and falconers, as well as legislation banning DDT, they rebounded and naturalists realized that cities could play a vital role in restoring the Peregrine back to the world as a species. Cities have very high places for the falcons to nest, and an endless food supply given the amount of pigeons; and they capture the imaginations of urban dwellers who’ve become interested and invested in their preservation.

It is heartening that there are so many Peregrine preservation projects around the country—they are a miracle of nature and it’s good that these birds have been taken off of the endangered species list. Our own here in Chicago, headed by the great Mary Hennen of Chicago’s Field Museum, is a model for other cities in its success of breeding and restoring Peregrines to nature.

I learn a lot of what I know from other birders—I am a rank novice compared to naturalists like Joel Greenberg, Greg Neise and Jeff Skrentny—and to be in their company and hear them talk about birds, the ecosystem of the city and specifically migration is an education in itself.

All of these people have been involved  in the preservation and restoration of the LaBagh Woods on the city’s Northwest Side. In what can only be described as a transformative act of both citizenship and environmental activism, these folks and about fifty to sixty different volunteers—among them, a great many birders—are, very quietly, in the process of restoring some wilderness to our city. If this sounds odd to you, it shouldn’t. Chicago is a huge and complex ecosystem, full of mink, otters, kingfishers, goshawks, Cooper’s hawks, a wide array of songbird species, as well as raccoons, coyotes and, most recently, a badger.

About one night a month I’m fortunate enough to get invited to a gathering called “Birds and Beers” and it is a gathering of birders. A group so diverse there really is no such thing as a “typical birder.” They talk birds, discuss new discoveries on eBird and get genuinely excited at the thought of an exotic sighting. Just recently someone posted that a purple gallinule had hit a building and knocked itself out. This is a bird that has NO business being this far north.

It seems with climate change nothing is impossible, bird-sighting-wise. I know people in Montreal who’ve seen European goldfinches, as well as birders in San Francisco who report spotting Japanese cardinals. Not for nothing do we have copious sightings of snowy owls on the lakefront—the food is there—ducks, gulls and rats; it is a virtual All-U-Can-Eat buffet. It’s no secret that coyotes are eating the shit out of rats as well. Every night when the sun goes down, almost every alley in the city rings the dinner bell. Personally, I’d much rather have coyotes than rats.

A few weeks ago, my lovely wife spotted a scrawny, underfed dog down by the Costco just south of Roosevelt Road. She had just bought some pig ears for our two mutts, Chooch and Huey. She stopped the car and tossed a pig ear to the skinny dog. He ate it in about twenty seconds, so she tossed him another and another. She couldn’t help but notice what a beautiful dog he was—narrow snout, very skinny legs and a big bushy tail. It dawned on her that she was feeding a coyote and after she threw him the first treat, he came right up to the car. He’d have eaten as many of the pig ears as she would have doled out.

What is amazing is the nature you find here, once you actually look for it. I see the Ukrainian Village Peregrines fairly often. Once in a while perched at the top of the “Car Town” sign. I’ve also seen Cooper’s hawks all over this part of town, keeping a close eye on the bird feeders and snatching unaware starlings and sparrows as well as blackbirds.

The nesting Peregrines are on top of St. Mary’s hospital in Ukrainian Village. I often see them soaring over the neighborhood and since I spent forty days there last year after my heart surgery, came to think of them as my guardians in an odd way. I was just happy that they were there, like beautiful fugitives.