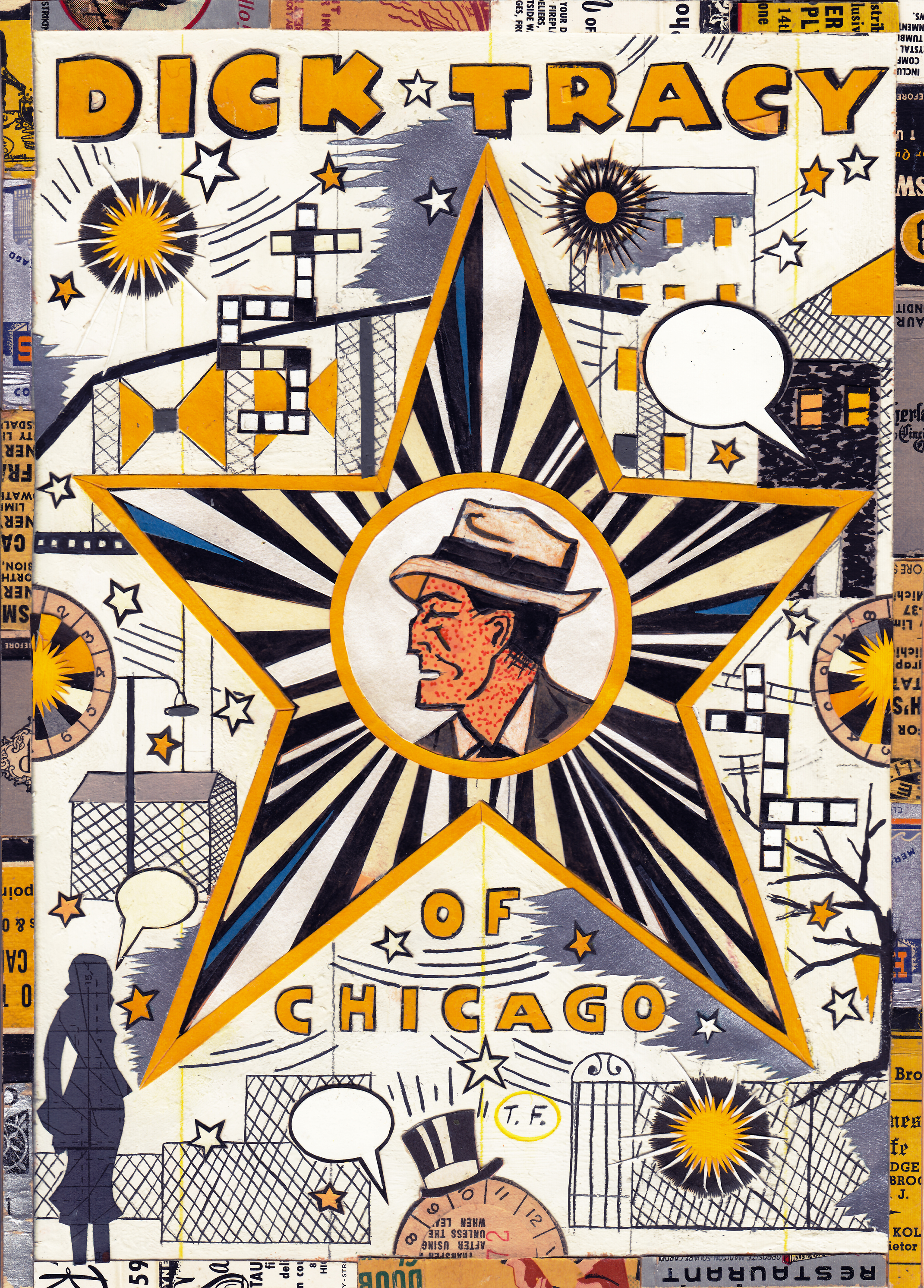 In the mid-sixties, the Sunday funnies were a portal to another world. They were really great then. My favorite strip was Dick Tracy, for all kinds of reasons. For one, it took place in Chicago and Tracy was square of jaw and heroic. He dealt out justice with a Calvinist zeal that was shockingly violent for a newspaper. It was also impeccably rendered. Whenever people ask me who my favorite artists are, Chester Gould is at the top of a very small list. I especially loved the bad guys in Dick Tracy; entities so evil that their transgression was manifested into their very physicality. Flyface, The Brow, The Mole with his giant proboscis and his beady eyes… Stooge Viller, a fixer, “Big Boy” Caprice and Pruneface, who had so much loose skin he had a pouch in his neck where he stashed jewels and swag and cash. They were mutants.

I met Mr. Gould when I was eight years old. My father was driving through the Woodstock area and he pointed out Chester Gould’s house to me. I made him stop the car. My dad asked me if I wanted to meet Gould and I screamed, “Yeah!” He told me to walk up to the door, knock and tell Mr. Gould who I was. (Like I was anybody.) I did. The door opened and an older man with white hair and rimless glasses looked down at me. I said, “Mr. Gould, I’m Tony Fitzpatrick and I’m a Crimestopper.” The Crimestoppers were Chester Gould’s own private rat-squad of kids who’d call the cops if they saw a crime being committed. I never actually dimed anyone, but he didn’t know that. He was a really nice man and he drew me a picture of Dick Tracy with his two-way wrist radio. I had it for years.

At a certain point, Mr. Gould told me to keep an eye out for “your long-hairs, your hippies, the malcontents and no-goodnicks who were calling the police names.” I assured him that, “They’re filthy people, Mr. Gould,” and that concluded our visit.

What he didn’t know was that two years later I would find MAD magazine and be king of the malcontents and no-goodnicks. If Chester Gould was right-wing, he came by it honestly. He was from Pawnee, Oklahoma and had a great respect for law men from an early age. He was certainly a conservative, but he still made time to be nice to a kid who’d knocked on his door.

The comics and MAD magazine were my portals of sanity as a kid. MAD assured me that the authority I loathed was well-worth loathing. The hall monitors of the world were assholes and the only people who changed anything for the better were different. What I loved about comics and MAD: this was the world the adults I knew had no place in and no purchase on.

Guys like Chester Gould, Jack Kirby, Steve Ditko, Harvey Kurtzman, Don Martin, Big Daddy Roth and Wally Wood made me want to be an artist. Everything else was for squares and assholes. I loved The Hulk and X-Men and all of the mutant comics—I had a Rat Fink figure that I went to war over with the whole neighborhood, pelting kids with handfuls of parking lot gravel, until they gave it back. A kid named Jay Forsberg stole my Dick Tracy hand puppet and I stomped a mud hole in his ass until he gave it back. If anybody fucked around with my comic books, it was war. I never brought them to school because bigger galoots would take them off me.

I never fucked around with the Archie comics or Disney stuff. Those were for girls. I liked mutant comics, where everyone was fucked up and conflicted.

In a perfect world, parents would buy their kids comics and be happy they are reading. My mother did. Other parents bought into the jive wolf-tickets our teachers were selling—that comics and MAD encouraged juvenile delinquency. Hey, I needed no help from MAD. I became an accomplished delinquent without any encouragement from comics.

In fifth grade we had a knuckle-dragging dickhead named Mr. Mandeville who would rip our comics up and throw them out if he caught us with them. He destroyed one of my really early X-Men comic books and we went to war—flaming hot bags of dog shit in his car. We’d piss in his desk drawers after school and draw giant dicks on his yellow MG with magic markers. He was a shit kicker from Indiana who’d try to get us to read slop like the Hardy Boys books and Highlights magazine. Fuck you, that drivel was strictly for the dentist’s office.

We hated this guy. He was a goo-goo; a do-gooder whose job it was to “improve our minds.” He pitched a lot of Jesus shit and we thought he was a puke. He once took my Big Little Book of Dick Tracy that my mother had given me for my birthday. I told another teacher, Mr. Gilles, and he got it back for me. I could hear him through the door, “What  is wrong with you? That kid is fucking nuts. Do you like dog shit in your car? Jesus Christ! Give him his book back. You don’t know what that kid will do.”

I got my book back.

I always read the Dick Tracy comic strip every Sunday — especially the Crimestopper Tips. One tip stands out to me now, even 50 years later. Reading the comics at 9 years old, I learned: If someone blinks very rapidly when they speak, it may be a sign of lying or deception. I’ve used this tip many times — personally and when observing public figures. The first time it was as a juror. It was a case of armed residential robbery. The evidence of guilt was overwhelming. The defendants were caught 2 min 20 sec after they left the house,… Read more »