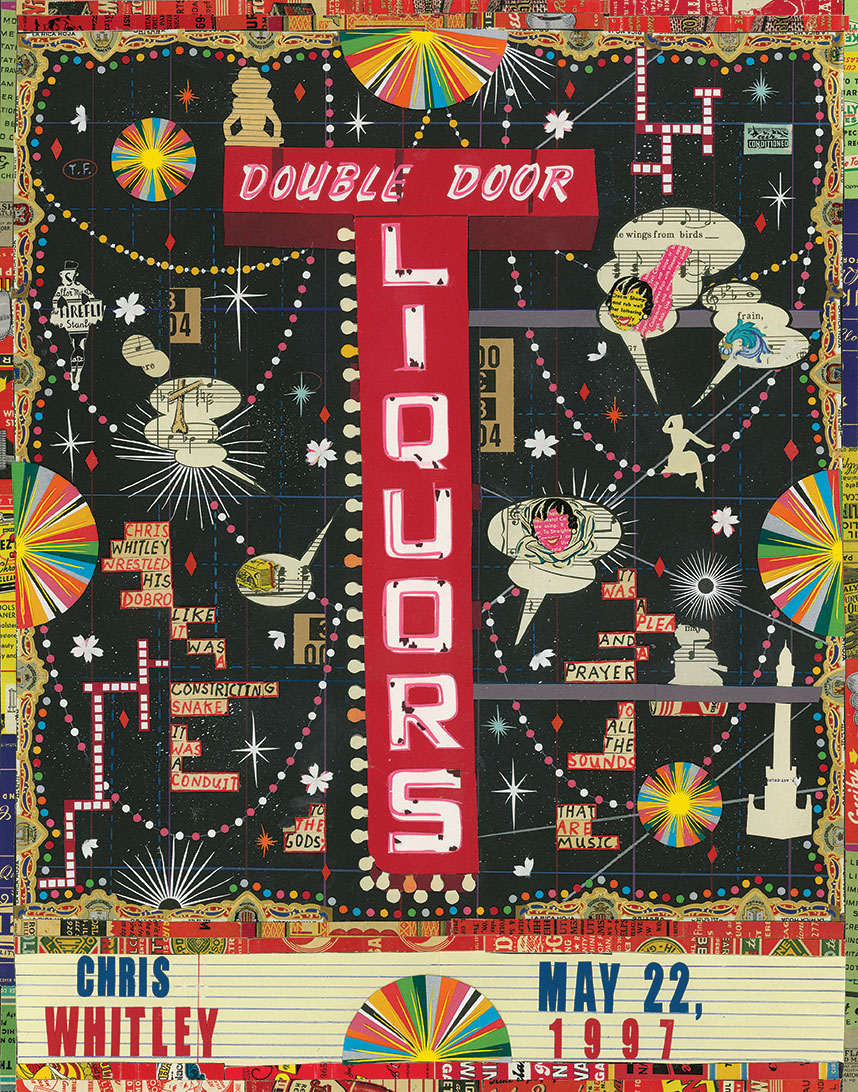 On June 12, 1994, the Double Door opened. It  was a fortuitous time for a rock club to hang out its shingle in this town. Chicago was being touted as the “new Seattle” with the emergence of Smashing Pumpkins, Liz Phair, Urge Overkill, as well as Veruca Salt and a host of other local heroes. There was spirited debate and out-and-out rancor between producer and rocker Steve Albini and Chicago Reader critic Bill Wyman, which spawned a months-long jab and counter jab exchange between the two. Into this heady mix came legendary Cabaret Metro owner Joe Shanahan and his partner Sean Mulroney. The time was right for a club to establish a footprint in the very neighborhood much of this music came from.

Thus came the Double Door; which had been a rather seedy establishment before Joe and Sean took over—the kind of joint that sold six-packs from behind bulletproof glass. Shanahan and Mulroney transformed it into one of the nation’s most respected and vital music venues and cultural centers.

People sometimes forget what Wicker Park was like before the real estate creeps got a hold of it.

It used to be the best neighborhood to get your nose broken in or your car vandalized or your ass kicked. Before artists established it as a beachhead, it was a perfectly good bad neighborhood. The kind of place you could dump a body at noon without arousing too much suspicion.

Seriously—before 1980 this was a tough neighborhood and in the mid-eighties this renaissance took place—cheap rent and lots of space attracted the creative community and, right on their heels, the real estate and developer weasels wandered the six-corners, surprising each other and snapping up three-flats as quickly as they could; and the invasion of assholes with sweaters tied around their necks and blow-dried hair began in earnest. Cars needing a jump were replaced by BMWs and SUVs, and yes, they had offspring. Suddenly instead of guys pushing shopping carts with all of their earthly possessions in them, it was the “Becky” invasion pushing strollers carrying little shits named Toby and Chad and Becca. It became a full-time job navigating around these assholes.

At least we had the Double Door—kind of the last whiff of what the bohemia that existed there had been. And it was glorious—in the years following that day in 1994—you could expect to hear this: Local H, Emilie Autumn, Liz Phair, Sonic Youth, Chris Whitley, Kings of Leon, Kanye West, Smashing Pumpkins, The Killers, the Rolling Stones, Cheap Trick, Liquid Soul AND The Deep Blue Groove, Naked Raygun, Wilco, Chance the Rapper. Oh, and the Stones show cost seven bucks.

Stephen Frears shot part of “High Fidelity” there—the best parts. And more recently Spike Lee shot the club scenes for “Chi-Raq” there as well. It is not an overstatement to say that the Double Door is as iconic a symbol of the 60622 zip code as the six-corners itself.

You may have read that there is an effort afoot to oust this great club from the neighborhood.

The current owner is attempting to evict the Double Door in favor of a more lucrative deal for the building. Why you would evict a tenant, who pays nearly twenty-five grand a month in rent, is beyond me. Especially tenants who’ve brought so many jobs, so much excitement and helped make the neighborhood so desirable to begin with. Really, do we need another Jimmy John’s or Lululemon or Starbucks?

If you want to realize the neighborhood’s gag reflex for this kind of shit, look no further than the closed Marc Jacobs store. We’ll only have so much of it.

Sadly the neighborhood has already been almost given over to the douchebags, bros and frat-boy crowd—like we need a Taco Bell you can get shit-faced at or another vape shop. I swear those places have a special “Asshole Lamp” they light every night and like a moth to flame, the assholes come, wearing their college football hats backwards and a string of drool hanging from their lower-lip.

The Double Door is one of the last vestiges of the creative community that once thrived there. And if it goes away, Wicker Park becomes an inner-city suburb of Wrigleyville and Lincoln Park. No thanks.

It’s hard to think of a better public citizen than Joe Shanahan. Whenever there is a cause, a benefit or a social initiative worth championing, he is the guy asking what he can do to help. He’s been extraordinarily generous with his venues, his time and his efforts on behalf of others.

Even while undergoing treatment for cancer, Shanahan kept a schedule full of obligations for good causes such as the fight against HIV/AIDS, with the American Express RED campaign, the Chicago Children’s Choir and Young Chicago Authors to name a few. Then there are the few hundred jobs he’s created with his various businesses and venues. Believe me, this is someone we WANT as part of this neighborhood.

One of the greatest shows I ever saw was at the Double Door, May 22, 1997. It was the last time I saw the great Chris Whitley. He had a relatively short career as he passed away in 2005.

And he was an unusual hybrid of influences. When his first record “Living With The Law” was released. AOR [album-oriented rock] stations played the hell out of it thinking they had the next Insurgent Country or Americana act. Whitley would surprise them with records like “Terra Incognita,” which defied categorization. He was just as influenced by Chet Baker and blues, especially blues, as he was by anything country. The night I saw him he was past the “big whisper” bloom of his first success and was clearly doing whatever moved him. What was so special about this show was how unpredictable it was—it went from blues to jazz to noisy punk to heartbreaking melodies—often in the same song. It was thrilling; it is also why live music is so important to be part of and to be witness to. That night I watched Chris Whitley wrestle his Dobro like it was a constricting snake; and the sounds that came out of it and him were a plea and a prayer to all that is music.

That night I was able to forget all that was around me and bear witness to a genius still discovering the boundlessness of his gift. And let me tell you, it was something to see; and it would not have been the same anyplace else.

Tony , Thanks for the great read on Double Door. Sean, Lori and Joe are true heroes and deserve great credit… but… Smashing Pumpkins, Liz Phair, Urge Overkill, as well as Veruca Salt? HEROES of the wicker park music scene? Ha, I do not think so sir… they were just the press whores who got cred for doing no service to the Wicker Park community that the true grits built (while running away from Latin Kings and whirlwinds of trash with no street lights) – Veruca Salt? Ivy league theater majors that ‘acted’ as a girl rock band? not… –… Read more »