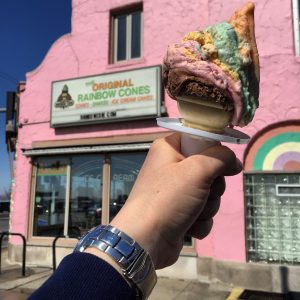 If there was any justice in the world, the family name most closely associated with the greatness of Chicago would not be The Daleys.

It would be The Sapps.

Sure, the Daleys built O’Hare, Millennium Park and several other monuments to Chicago’s spirit of ingenuity triumphing over reason. But in 1926, when Old Man Daley was still finding his way around Bridgeport, Joseph Sapp and his wife Katherine built Original Rainbow Cone, a small store at 92nd Street and South Western Avenue that sold a unique, five-flavor ice cream treat of the same name. Some ninety years later, the store is in roughly the same location as when it opened and a Rainbow Cone remains one of the finest desserts known to man, woman or child.

The Rainbow Cone is both an engineering marvel and a kid’s fantasy come true. Literally. The story goes that the New York-born Sapp grew up as an orphan on an Ohio work farm and had few indulgences, save for the times he could save up enough money for ice cream. At the time, he had two choices: chocolate and vanilla. Rather than a single serving of one or the other, Sapp envisioned a carnival of flavors perched on his cone. As an adult, he brought this vision to life:

That’s what it looks like, top to bottom. Five layers of ice cream, which could fairly be called slabs. They are not scoops. In a city once known as Hog Butcher for the World, this seems right. It also seems right that Chicago’s most famous ice cream should be built one level at a time like the skyscrapers the city invented. The slender cone below never seems quite up to the task of supporting it all, but it perseveres.

The Palmer House flavor always intrigued me: Venetian vanilla with cherries and walnuts. For a long time, I assumed it was invented, like the chocolate fudge brownie, by the legendary Chicago hotel of the same name. According to Joseph’s granddaughter Lynn, who has run Rainbow Cone since the 1980s, a New York dairy had a vanilla-and-cherries flavor called Palmer. Joseph added walnuts to the ice cream and “House” in honor of the hotel; he and his wife were equally savvy about marketing and making ice cream.

Once assembled, the ice cream often forms the shape of a scalene triangle, the orange sherbet layer valiantly holding it together over the top. It is possible to order a small Rainbow Cone from the menu but even then its size recalls a slice of Chicago’s famed deep-dish pizza. Lynn says Joseph’s original recipe was designed to be chock full of as much nutrition as possible—mainly from the fruits and nuts. His motto then was “Ice cream is good food. Eat ice cream daily.”

It begins melting immediately, as fleeting as a Chicago summer. And it’s delicious. If I were a proper food critic, I might be able to describe why it works so well or contrast the way it’s made with similar frozen treats. All I can tell you is it tastes like roller coasters and a run through the sprinkler and staying at the park until 9pm and all the joys afforded by the warmth of the sun.

For those with an allergy, there’s a nut-free version that I understand is just as good. You can also get rainbow ice cream cakes and sundaes with various other flavors. I know this because it’s on the menu, but I’ve never had any of it. You can also get quarts of Rainbow Cone through November. I never have. The scarcity is part of the anticipation. What’s the fun in wanting something you can have anytime?

The ice cream aside, it’s important to understand why opening Rainbow Cone was sort of a crazy thing to do though perhaps no more or less crazy than raising up the buildings of downtown Chicago some ten feet through the use of jackscrews so an underground sewage system could be built. (Look it up.)

It gets cold in Chicago. Very cold. For months. So the window of opportunity for convincing people to leave their warm houses and buy something that will make them colder is a small one. Rainbow Cone closes for the season in November and opens again in early March, which is so much wishful thinking. This year, I went to Rainbow Cone two weeks after it opened and took a picture of the cone piled high with multi-colored ice cream, my hand wrapped triumphantly around it. “Suck it, winter,” read the caption when I posted it to social media. Never mind you can see a good foot-and-a-half of snow on the ground in the background of the picture. I think it eventually melted in April.

Also, Rainbow Cone was built in what is now the vibrant neighborhood of Beverly on the far South Side of Chicago. But back in 1926, that area of the city was still developing and known for the number of cemeteries there. According to Lynn, Joseph realized there was a market in the relatives of those dearly departed who would come to visit them. On their way back into the city, they’d need something to lift their spirits and they’d stop at Rainbow Cone. Even now, Sundays remain Rainbow Cone’s busiest day.

The unique two-story design of the Rainbow Cone store is meant to evoke the fluffy ice cream it serves. Pepto-Bismol pink stucco with orange Spanish-style roof tiles. The doorway trimmed in rainbow-colored bricks. A towering Rainbow Cone on the roof. Neon letters offering “Cakes For Any Occasion.” It stands just across the street from the original location, on the border of Chicago and the village of Evergreen Park. The suburb recently removed acres of trees and green space to build big box stores and a gas station. It is as if Rainbow Cone stands at the entrance of the city, a guardian meant to preserve Chicago’s past.

Rainbow Cone remains a family business. Joseph’s son Bob and his wife Jean ran it in the 1960s and seventies and their daughter Lynn took it over from them. Outlasting the imitators (it’s not called Original Rainbow Cone for nothing), it’s been served up at Taste of Chicago for more than twenty-seven years and functioned as the city’s culinary ambassador at events in Washington, D.C. and Los Angeles.

Rainbow Cone has been a part of South Side childhoods for decades. The ice cream is certainly delicious. But I go back there several times a summer as a reminder of what you can do when you leave behind all the reasons why you shouldn’t do something and think about what you dreamed of making as a kid. Chicago has always given me a place to do that.

I’m sure the Daleys would say the same.