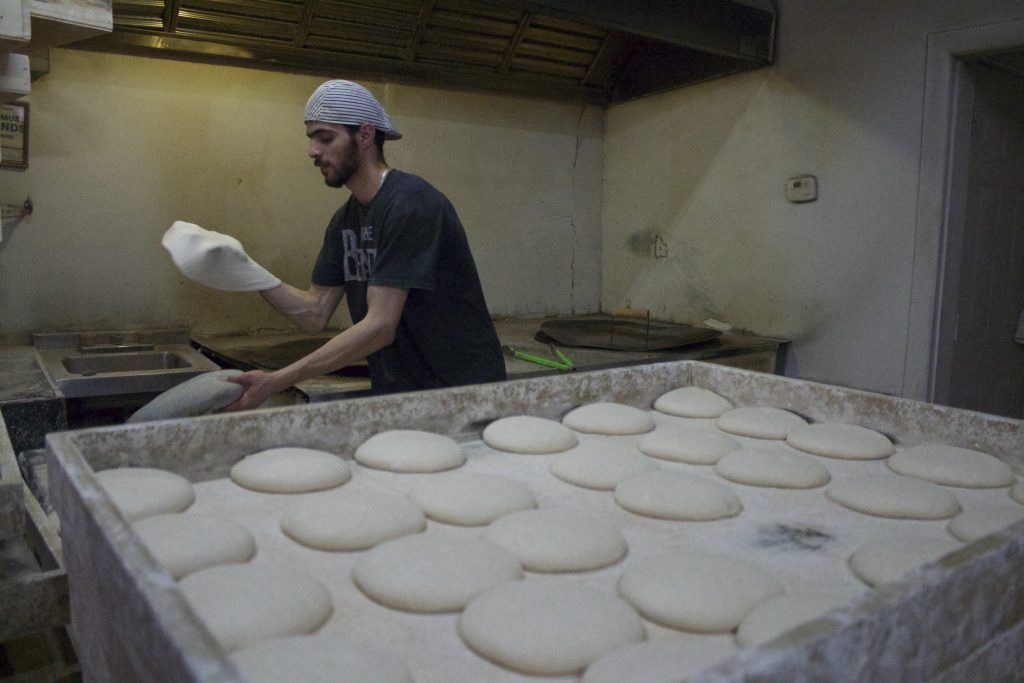 Faris Shlaimon, forty-six, an Assyrian Iraqi, describes summers after midnight in West Ridge from the counter of Baghdad Bakery at 2732 West Devon.

Summer is bad inside the bakery because it’s hot, but it’s the best season for business. Imagine it is thirty degrees hotter inside the bakery than the street. Sometimes, it’s 130 degrees in here. I have four working ovens so no matter the ventilation system or air conditioner, in summer it’s a sauna but my guys are used to it. Homemade bread, that’s why.


My guys: I have seven employees and three of them are brothers from Baghdad who come from a family of bakers. Truly they are experts; everyone in the family bakes. When you watch them throw dough into the tanoor oven, they look like they are dancing they move so fast. I’m the owner and even I watch Dia’a, one of the brothers, when he is moving. I’m lucky to have found this family. Once I brought new guys during the summer, they were in my shop two days before they ran away. It’s a hard job working with fire and heat.

I’m from Baghdad in a neighborhood called Karrada near the city’s eastern gate. That’s why my bakery is called Baghdad Bakery. Here in West Ridge there are a lot of Assyrians, Arabs, Afghanis, Pakistanis, Indians and Hasidic Jews. You can say my bakery is literally the middle point of all these groups on Devon. To the right, it’s the Assyrian and Arab shops. To the left, it’s Indians, Pakistanis and Afghanis until you reach Western then you find Arab shops again. It’s not just Iraqis who buy my bread; Indians, Pakistanis and Afghanis make up about sixty percent of my business. They come in for my khoubz tanoor, which is a flat, circular bread cooked in a vertical tannur oven. It’s a bread originally brought to Iraq by Afghanis, so they like it. They tell me it’s like their roti; they eat it with butter.

During the summer months, my business doubles. I go from making about 3,000 to 6,000 pieces of samoun and khoubz tanoor bread a day. Last year Ramadan fell over the summer and this summer, too. Ramadan is one of our busiest times of year. You know, I’m an Assyrian Christian from Baghdad but I lived with Muslims in Iraq and Jordan, and my old business partner was Muslim so I know their holidays.

During summer, there are huge orders for the mosques in the neighborhood so we have to do them. We mix our dough at 12am, bake by 1am and we stay open until 3pm the next day. That’s the life of a baker. These summer nights, you find people out all night on Devon. They pray until the first light so from o1am to 5am I sell a lot of fresh bread. It’s mostly men who have spent all night in the mosque. They do their tarawih, the extra prayers at night, then they stop in my bakery to buy the bread for suhoor, the last meal before dawn until the following sunset. Don’t forget that it’s summer here; they suffer no water, no food. But my bakery is full all night.

My bread is all natural, no preservatives. Salt, yeast, water and flour–that’s it. I need to sell everything every day because I don’t freeze anything. It’s nice to serve the community fresh bread every day. A lot of people tell me, put some preservatives in your bread to make more money. But you know, preservatives are not good for the people, and I bake for the people. Iraqi bread may be heavy, but it’s healthy.

Usually, we make samoun and khoubz tanoor, both are Iraqi breads. Then there are my pies: cheese, potato, spinach, za’atar and meat. During the summers, I add khoubz arouq, an Iraqi bread stuffed with spiced meat, parsley and onion, and also kahi, a thin unleavened pastry, that Iraqis love to eat with geymer, which is our clotted cream, and a sugar syrup, to the menu. The funny thing is that these are winter foods in Iraq. Everything seems opposite in Chicago during the summer, but don’t ask me why. I do whatever the customers need.

Life is hard here. But if you work and save your money then invest it into your own business, you can make something of yourself. For the first few years I was here, I worked at the bakery, then when it closed in the afternoon, I moved on to food services at CPS, then valeting at night downtown. Sometimes I would work twenty hours a day. I saved enough to take over this business and things are good.

In Arab countries you are always in danger of deportation as a refugee, especially Iraqis. So when you find the chance to resettle, you are one of the lucky ones. My first two months in Chicago, I hated myself. I was an engineer and manager in Jordan for nine years after I left Iraq. I had bad luck arriving to the city during the economic crisis of 2009 but I’ve found my way. I walked from Skokie to Devon stopping in every store along the street asking for a job because I have a family. Even if I am an engineer, I need to feed my kid. I found a job in this bakery and I took it. From there, I learned how to bake Iraqi bread and saw I could make money from it. In April 2014, I became a partner and last year I took over the business. Now, I have seven employees working for me.

Sure, I miss Baghdad, but this neighborhood reminds me of Baghdad a little. Home is always home, but Chicago is my city. No one will knock on my door at night and ask me what I am: Sunni, Shia, Christian. No one cares what you are and that’s all that matters. (As told to Sarah Conway)