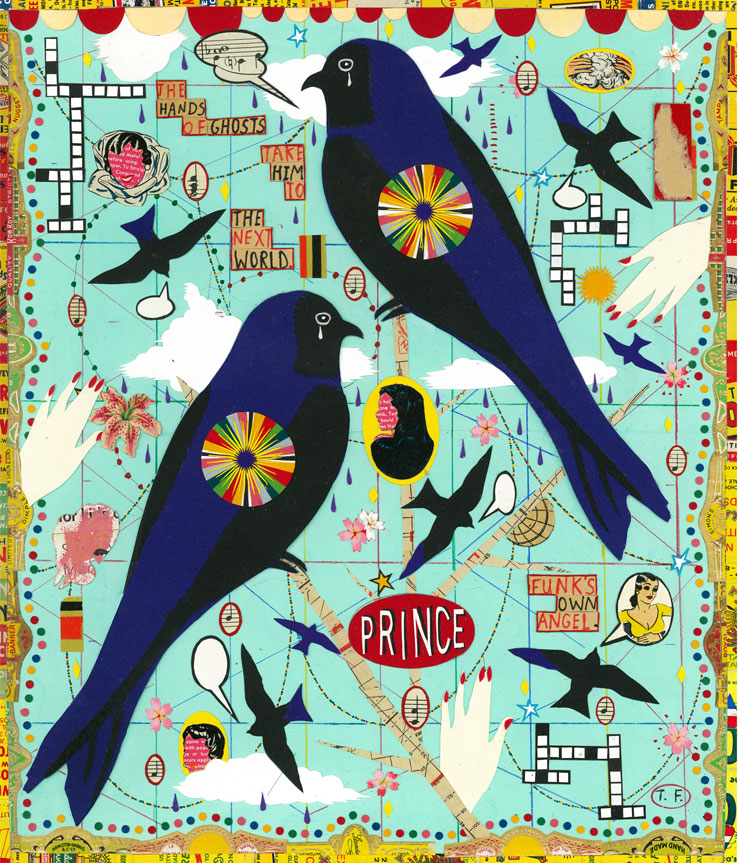 In the world of music, it has been a year of furious loss. One musical icon after the next has left us. Since the year began: Bowie, Merle Haggard, Maurice White and the one I felt most viscerally, Prince.

I guess I am at that age, my  mid-fifties, when one knows that all of these mortal bells toll also for you. Still, Prince’s premature departure still aches in a way that feels unfair. It’s been a few weeks and I still feel awful. He was the goods—the closest thing my generation had to a James Brown or a Little Richard.

He surfaced in 1980 and nobody knew quite what to do with him or how to categorize him—he was only like himself. He moved with the funk all-star grace of Michael Jackson or James Brown, and at the top of his game, he played guitar as well as Jimi Hendrix. He wrote hit after hit after hit; to call him multitalented was an understatement.

One must remember that he emerged during the last gasps of what was known as “disco” music. There was no small amount of race-baiting and homophobia among the “Disco Sucks” crowd, a largely white, working-class bunch. Yet somehow they embraced Prince—he made it cool to like danceable music. Between Prince and Chicago’s own Frankie Knuckles, new kinds of danceable music came to the fore and Prince’s variety also rocked hard. From the minute he had his first hit, he was a star and he knew how to be a star. He kept a sense of mystery about himself and had a sense of humor, a sly wink to let you know that while he took his music seriously, he didn’t take himself  that seriously. You became an accomplice in his fun, his rebellion and his romance.

There were charges that the movie “Purple Rain” underlined a kind of sexism that women found repellent, but they somehow were willing to forgive Prince these transgressions. I knew hardcore feminists who adored Prince and held him to different rules than they would any other artist. And this may have been the crux of his success—his otherness.

Whenever there was news of a new Prince record, it was an event throughout the late eighties and early nineties. I remember the anticipation for the “Black” album, the thrilling filmed shows that became “Sign O’ the Times,” the tidal change in tone of “Diamonds and Pearls” and “Lovesexy.” They were contrary, soulful, contradictory, melodic and great records that kept the entirety of his audience guessing.

There was also the cottage industry of revitalizing other artist’s careers and in some cases, helping start them: Sinéad O’Connor with”Nothing Compares 2 You”; Stevie Nicks, whose career was just one-winged-dove away from the crapper when he inspired “Stand Back” and performed on it; Tom Jones, whose mash-up of  “Kiss” with the Art of Noise breathed new life into a great singer’s repertoire as well as providing Mr. Jones with a second act and a brand new audience. He was generous with his talent; an enigma of an unstoppable beat, he was Funk’s Angel.

He also broke down the door for androgynous acts, much like David Bowie or the New York Dolls, blending male and female traits without a hint of condescension or “camp.” Everyone was welcome in Prince’s demimonde. At a Prince show, even alpha-males got in touch with their female side.

I saw him a number of times and was always knocked out at the sheer energy of a Prince show. It was always two-and-a-half to three hours of a non-stop groove—shaking, shimmying, sweating, and doing the splits. Then there were the towering guitar solos—each more pyrotechnically complex and lovely then the last. I was also almost always told that he’d play an after-show at around one in the morning.

Not for nothing do artists no less than Tom Petty and Jeff Lynne look like lab rats next to Prince at George Harrison’s induction into the Rock and Roll Hall of Fame. Prince steps out of the shadows wearing a raspberry Hamburg brim and performs a soaring, soulful, exigent solo on “While My Guitar Gently Weeps,” which to my mind was the most heartening eulogy Mr. Harrison ever got.

Why? Because talents and gifts this rare come around a couple of times a century—mark my words—in the coming years the music from his vaults will be released and it will dawn on us that the music he performed during his life barely scratched the surface. There are most assuredly three or four more incarnations of the musician we knew as Prince.

The night of Prince’s passing, his old pal Spike Lee held a giant dance party in Brooklyn. It is Spike’s way to spit in the face of despair, so that day he celebrated the life and music of his friend. For as far as you could see on CNN, people were dancing, singing and crying out of joy, under purple lights. It was as it should have been—his royal badness going out with a wry half-smile, a profane swagger and a soulful croon.