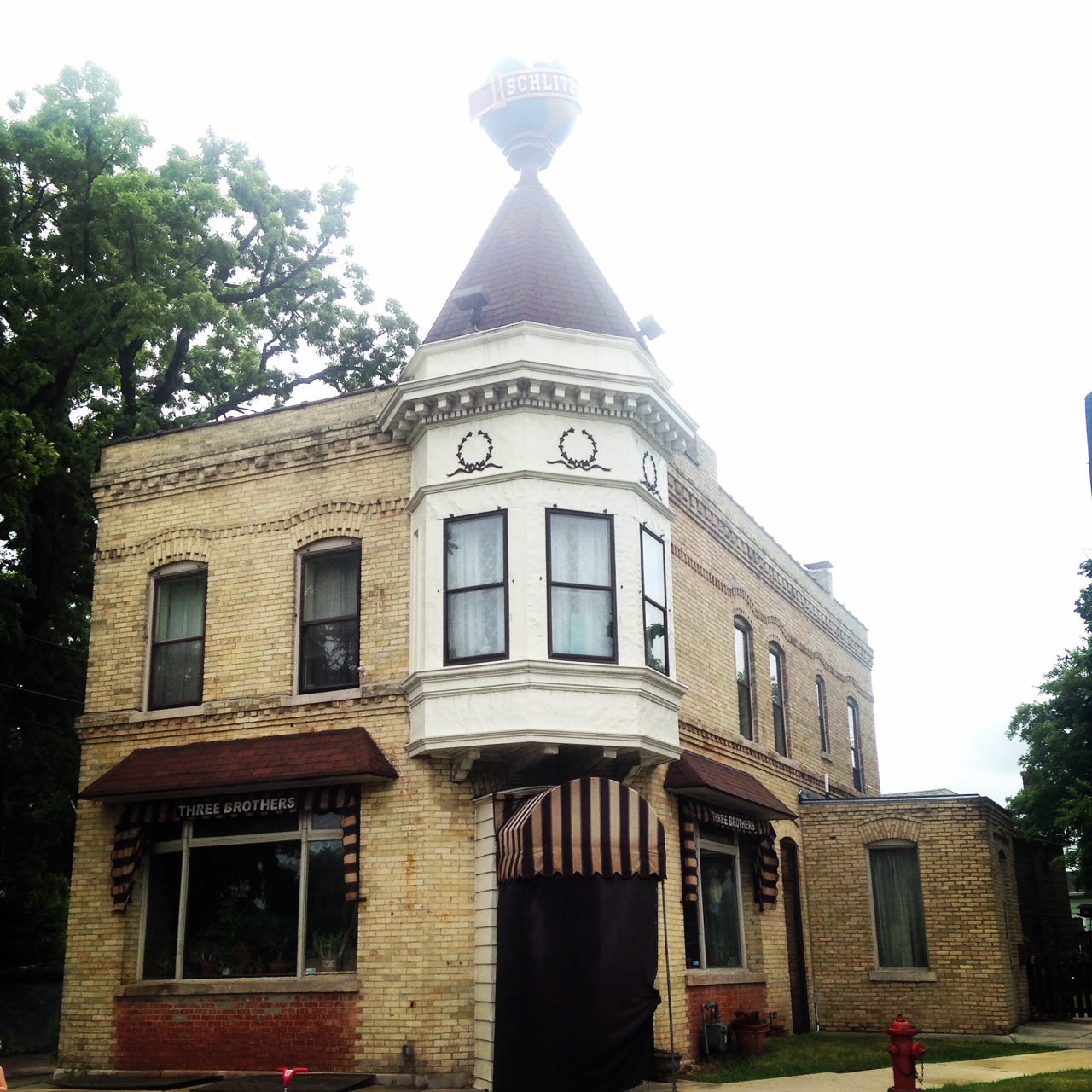 However, it is another holdover from an earlier era that made me fall in love with the city. In many neighborhoods, the typical “store + flat,” two-story frame buildings still have occupied storefronts, harkening back to a time before supermarkets, strip malls and freeways.

Two years ago, inspired by an encounter with a corner store, I decided it was time to leave Chicago. On a visit to see my parents in Milwaukee County, my mom and I explored the south side neighborhood of Bay View and there, I found G. Groppi Food Market. I fell in love.

Groppi’s is a 103-year-old corner grocery store with the original wood floors, boxes of vegetables stacked in the windows, a restored antique bakery counter and a deli serving paninis. In 2011, the current owners expanded the building to include a bar called Louie’s Coop, sandwiched between the wine section and the butcher counter, that hosts live music and wine tastings. On any given night, people are at the bar eating a charcuterie plate or something from the hot food counter. It is the most amazing gem of a place: the offerings of a Mariano’s at the scale of a bodega.

One trip inside Groppi and it was decided: we’d pack up and move to Bay View. Sorry, Chicago, but Milwaukee’s charm won me over.

Northeast of Groppi is the Palomino Bar in a typical “store + flat” duplex building with a neon sign advertising “Cold, Crispy Beer.” During warm weather, the patio out front is full of people drinking Old Fashioneds and eating fried chicken and pie. Palomino is the corner bar with a twenty-first-century update. It has a large antique bar but the interior has been completely updated, the food is mostly fresh and locally sourced, and, as could be expected, the beer list is great.

Across the street is a bar and event venue called Club Garibaldi. Housed in a plain Schlitz-tied house, the Club serves food and is a hot spot for live music. And to boot, it still partly serves its original purpose as an Italian American Mutual Aid Society. I know this because one night, my husband and I were sitting on the patio at Palomino and a pack of old Italian men were filing into the bar. Unable to imagine what show they were going to see, we went in to see a meeting in progress.

Tucked throughout Milwaukee neighborhoods are these places where the city of the pre-highway era meets the walkable neighborhoods of the future. Groppi’s, Palomino and Club Garibaldi are all on Russell Avenue which was a thriving “Little Italy” back in the time when an iron rolling mill terminated the block. It is now more a neighborhood thoroughfare than a commercial corridor. There are many small-scale commercial buildings still functioning in either their original capacity or some related commercial use.

Beyond Russell Avenue, there are more bars and restaurants tucked within residential blocks. One block north of Groppi’s, on a residential side street, is Goodkind, a comfortable upscale restaurant serving artisanal cocktails, charcuterie, rotisserie meats and fresh pasta. The block is otherwise entirely residential and Goodkind looks like a typical two-flat. The only indication of its commercial life are the large plate glass windows and repurposed wood siding.

Around the corner from Goodkind on Saint Clair Street is Three Brothers, a sixty-year-old Serbian restaurant housed in a handsome Schlitz-tied house made of cream city brick that was manufactured from the light-colored clay in Milwaukee’s Menomonee Valley. Around the corner is the legendary Dom and Phil’s DeMarinis Pizza which has been serving Bay View for twenty years.

Part of Milwaukee’s charm is that it doesn’t appear to have zoning that strictly separates commercial and residential zones. Nearly all of these small businesses in my neighborhood have a city or regional draw but defy all logic of commercial activity: there is no parking, no adjacent business, they aren’t visible, and they are away from the heart of the nightlife.

And for all of this charm, we can thank Milwaukee’s (perhaps excessive) drinking culture. In 2012, both Chicago magazine and USA Today did pieces on the decline of the neighborhood tavern in Chicago. Much of this demise is attributed to Mayor Daley, his father and their general distaste for disorder. According to Chicago magazine, between 1990 and 2005, nearly 1,000 liquor licenses were revoked, resulting in the demise of the corner tavern.

Meanwhile, Milwaukee continued with a bar culture that produced entire culinary traditions just so German workers had a reason to bring their family to the bar. Fish fries and the Sunday tradition of hot ham and rolls are an early marriage of food and drinking culture. Say what you will about Wisconsin’s drinking culture, you’re not taking our corner bars!

This nostalgia for the streets of yesteryear is woven into Milwaukee’s cultural experience. The Milwaukee Public Museum has offered a time capsule through its continually popular, fifty-year-old “Streets of Old Milwaukee” exhibition which was just completely rebuilt and reinstalled earlier this year. Many of us who grew up in the area were impacted by the experience of walking on those cobblestone streets.

Milwaukee is an exciting place to live for an urbanist like myself. Having seen Chicago evolve over twenty years gives me the perspective of what is possible when old buildings get a new life. The rich fabric of historic buildings and cultural continuity of places like corner markets and bars give the city an advantage in its rebirth as a dense, walkable and bikeable city that grows and flourishes in the twenty-first century.