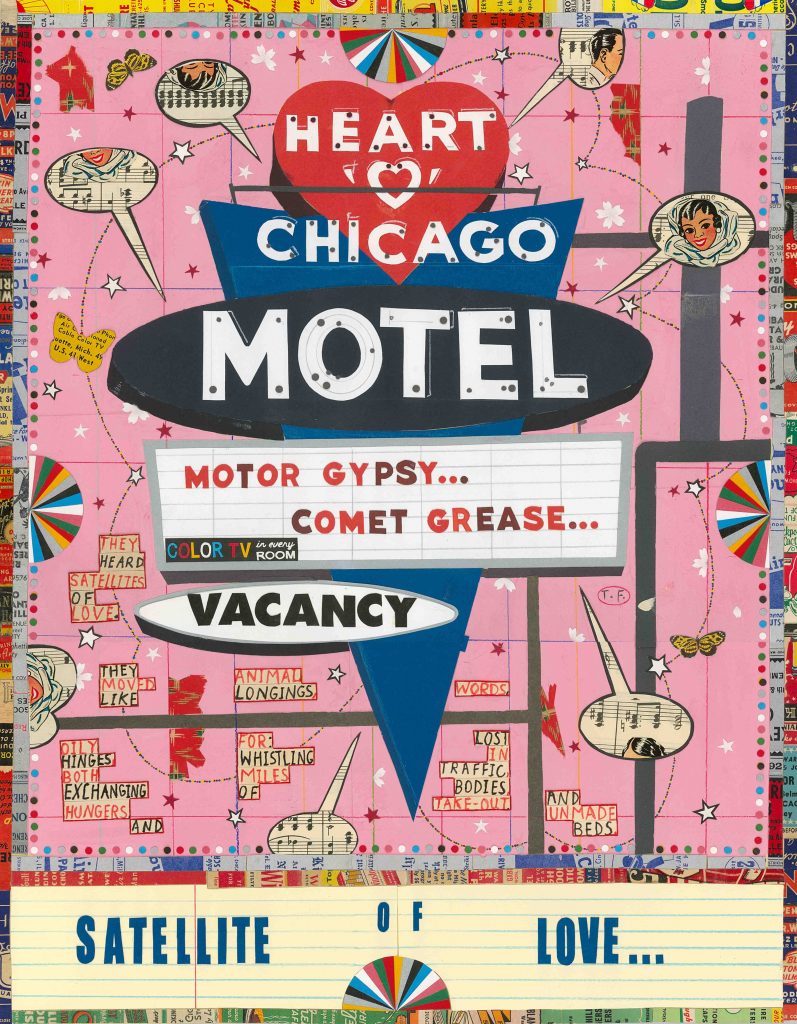 More and more, the Albert Camus quote about artists taking a long and arduous journey to rediscover the one or two images that first opened their heart feels true to me. As a kid, I loved signs, and Chicago was full of them. I also memorized the ones in Villa Park and Lombard as a way of navigating. I loved the Cock Robin sign because of the rainbow cones you could get there–three neon-bright square scoops of sherbet. I also loved their burgers, which is not to say that they were good. They weren’t. They were buffalo pucks, but as a kid, I ate all manner of garbage happily.

I love the Heart of Chicago Motel sign because it just looks so… illicit; as if whatever they’re doing in there, I bet they’re having fun. I love the Fireside Bowl sign because it reminds me of so many great shows there like the Orwells and Sleater-Kinney.

When I was a kid, there was less disposable income around. Instead of throwing out a worn pair of shoes, people got them repaired, resoled and reshaped, and had the heels rebuilt. There was a shop in the Greyhound Bus depot downtown that had, on any given day, what looked like dozens upon dozens of shoes in various states of repair, with a couple of guys working diligently, swearing, talking smack and telling dirty jokes. I loved being there precisely because it was the kind of atmosphere that I wasn’t supposed to be anywhere near. There was a curious older guy who smelled like a Beefeater martini jawboning the customers and making change.

He would look at me and say, “Kid, do you know what they call a man who makes shoes?” and I’d say,”A cobbler?” and he’d say, “That’s right, but what do you call the guys who repair his shitty work?” I told him I didn’t know and he told me, “Why, you call us anything but late for supper.”

All of the guys in the shop would crack up and I’d pretend to laugh, not quite understanding the joke. I was about eleven and my dad would get his wingtips repaired there from time to time.

The place was full of old shoe-repair signs and I never forgot them.

I’m often accused of “nostalgia,” which really isn’t the case. I am sometimes curious about the invisible arc that links us to childhood and our own history.

Thoughts, places, tastes, smells and sights that, co-mingled, help make up part of who we become. I’ve been more prone to this since my heart surgery. I guess the sudden interference of mortality makes one do the long backwards math of how you became who you became and what really has resonance in one’s life.

My friend Mark Turcotte, the great poet, put it best: “For Remembering, For not Forgetting.” He opened his brilliant collection  of poems, “Exploding Chippewas,” with this dedication and I never forgot it. It has become one of my rules.

One of the things I loved in Tokyo was all of the packaging of candy, snacks, flair, popsicles, you name it. There were all kinds of signs and messages therein. Even today, I can tell what kind of neighborhood I’m in anywhere in the world just by the signs.

The drive on Los Angeles’ Sunset Boulevard from the Pacific to downtown LA takes you through every American circumstance and appetite, from the penthouse to the outhouse and back. One minute you’re driving through tony Bel-Air, and very soon you’re among the walking wounded of East LA. This drive is amazing at night, when Los Angeles looks like a fleet, sleek animal decked out in lights. I get what people love about it. On that majestic ride, everything looks possible.

Needless to say there were no Cock Robin burger joints in LA. They have Rick’s Drive In & Out Burger, which is way better and also has an iconic sign.

People who’ve had near-death experiences will always tell you “your life flashes before your eyes” or some such jive. Truth be told, they are not all the way wrong. You find yourself revisiting places, situations and circumstances that are familiar, a little like a déjà vu thing, but more resonant because it is something from your life, if this makes any sense; because sometimes memory does not—it links images and time in ways that don’t seem to make sense and at times  it feels as if your conscious and subconscious are working at cross purposes.

I saw the Cock Robin sign, many birds, the side of my house from childhood where my mother grew lily of the valley, and my sister’s rabbits, my father’s brown wingtips, among other things. They felt like missives from a childhood, waving goodbye.