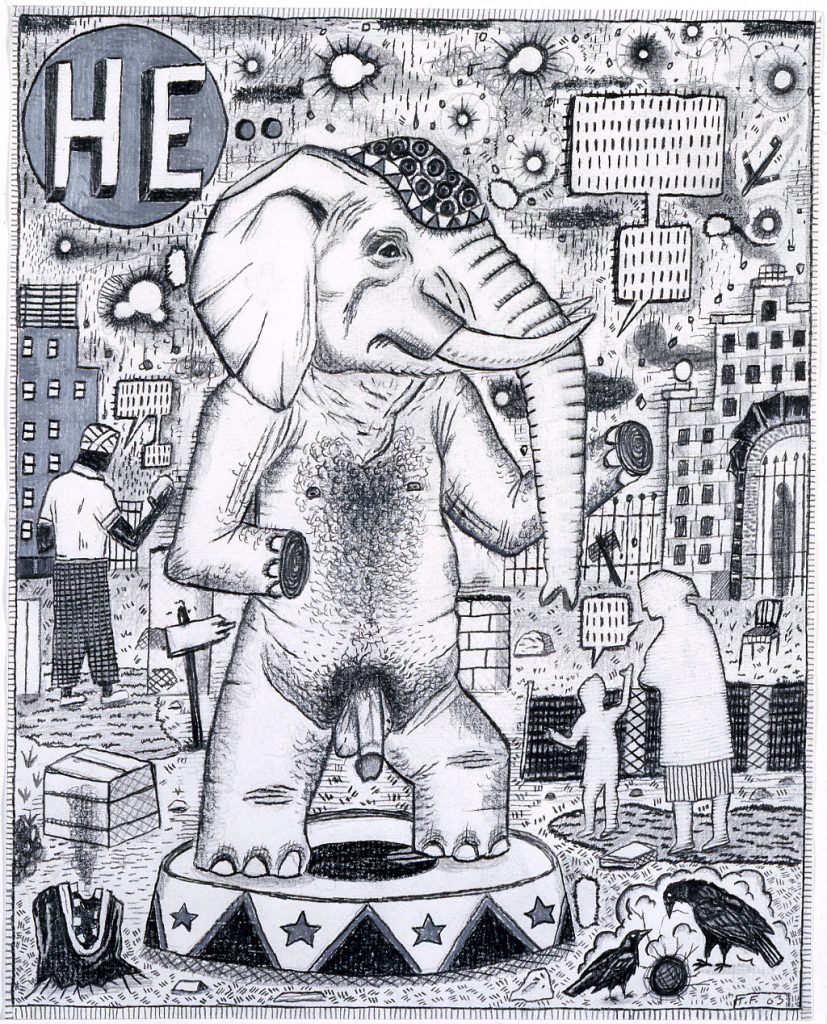 It hasn’t really even started yet and already the 2016 GOP convention in Cleveland is coming into sharp focus as an intersection of our discontent as a nation. I’ve never seen greater division in America and I grew up watching the Vietnam War on television on the nightly news and the attendant protests that eventually put a halt to that ugly war. Everywhere one looks we are divided—race, class and gender; and so needlessly, the most economically advantaged nation in the history of civilization seems hellbent on cannibalizing itself.

In the next few months we will find out just what kind of nation we are, while shaping the narrative for this century.

The rise of Donald Trump—the Cheetos-toned, Ass-Clown and nominee for the GOP’s ticket—is but a symptom of our deep divisions and resentments. His pick for vice president is even more scary. Mike Pence is a stone bigot who has already legislated some of the most hateful anti-LGBTQ laws in our land. That this cement-head could be one scant heartbeat away from the presidency, as well as the nuclear codes and Supreme Court nominees, should scare the living daylights out of you. Look hard at Trump and you see a guy who is one prime-rib dinner away from a coronary. Not exactly a physical specimen, but a specimen of some sort.

Two years ago a Trump candidacy, much less a presidency, would have been and was a punchline. Now? It isn’t so funny.

Where we are as a people is especially tenuous. Trump has awakened the slumbering and ugly poisons that infect us as a people. Can’t pay your mortgage? Can’t keep your job?—blame immigrants, blame unions, blame Muslims, blame Obama.

By all means don’t blame the banks that bet against the citizenry in the mortgage meltdown. Don’t blame the futile Iraq war that now drags on past its thirteenth year while giving birth to ISIS and a myriad of other terror cells while costing this country over a trillion dollars and killing an untold amount of innocents. That we’ve maintained a policy of warfare over cheap gasoline has coarsened our profile in the world. A Trump/Pence residence in the White House would send the rest of the world the message that we intend to remain the neighborhood bully on the world stage and also guarantee an escalation of killing in the name of fossil fuel.

And what of the recent and horrific murders of policemen in Dallas and Baton Rouge or the continuous killing of unarmed black men in our cities? It doesn’t take a genius to figure out that since the birth of the Republic, the law in America has been applied inequitably—it has been open season on people of color. And that eventually when you shoot enough people, they start shooting back.

I do not in any way condone the murder of policemen and women—these crimes, like all violence, is horrific and inhuman and unworthy of us as a nation. That law enforcement did not see this pushback coming tells us something about our volitional blindness as a culture.

My friend and mentor Studs Terkel used to say “If there is something wrong in my community then it is also my problem.” The notion of being your brother’s keeper is a welcome thought when we see the division and pain in our country.

Don’t feed the ugly beasts out there anymore. Don’t vote for the neanderthals.

If Donald Trump can use the men’s room without pissing on his own shoes, I’m not surprised, I’m amazed. This is without a doubt the most intellectually deficient person who has ever run for office, ANY office. If he makes you feel good about yourself by disparaging everyone who is not like you, you need to do some soul-searching. If you think he is qualified for governance because he is wealthy, you need to realize dollar bills are not brain cells. If you think Donald Trump gives a fuck about you as a citizen or your family, take off the tinfoil hat and take a good look at the violence that surrounds his every appearance, speech or rally.

If you want to know what Donald Trump will do for America, take a good look at Atlantic City where his casinos went bust and cast hundreds upon hundreds into unemployment, and this nitwit didn’t miss a step. Look into his business practices and realize he has been sued and gone bankrupt many times. Look up the sham and hustle of “Trump University.” John Oliver did a brilliant analysis and takedown of this “University” on his HBO show.

I am writing this on a Monday, the first afternoon of the GOP’s convention and already there is division, skirmishes and rancor in Cleveland. I always maintain that a culture gets the leadership it deserves.

Whatever issues one might have had with the Obama presidency, it was at the very least dignified. He will leave the White House with one of the most singular achievements in the history of the presidency—the Affordable Healthcare Act, which saved my life; unprecedented job growth; and the right of same-sex couples to marry—these alone are an astonishing legacy. And he never once was an embarrassment to his office or our country. For all of my issues with the warfare, I think he has been a great president who inherited one of the worst hands in history.

So if you’re even entertaining the idea of voting for  the Trump/Pence ticket, I would remind you that we are a vastly better people than this and I will ask you to think more of your country; and for that matter, think more of yourself.

Very eloquently put ,Tony, and thank you for being a great art teacher to me back in the crazy 80’s!

Maybe Tony needs to come out to Westmont IL and look at the store fronts that have been closed all over town for 8 years! Some businesses pop up-only to close w/in a year.
People “can’t” keep their jobs = they are scared, or blame immigrants. What utter rubbish coming from a man old enough to know better.
The rest of his words were plagiarized form standard boilerplate liberal/progressive hacks. Get an original thought Tony. I can read your views anywhere – like at the DNC convention this week coming from every speaker covering for the failures of the democrat party platform.

11 bravo– How ironic that you think Mr. Trump; with his long ,documented history of screwing working people–is somehow a cure for all of this economic wreckage–and I don’t have to go out to Westmont to find boarded up stores– we have plenty in the city of Chicago. I am also not a Democrat–this election year?… they just happen to be the leper’s with the prettiest scabs…believe me sir I hold politicians in as much contempt as you do….