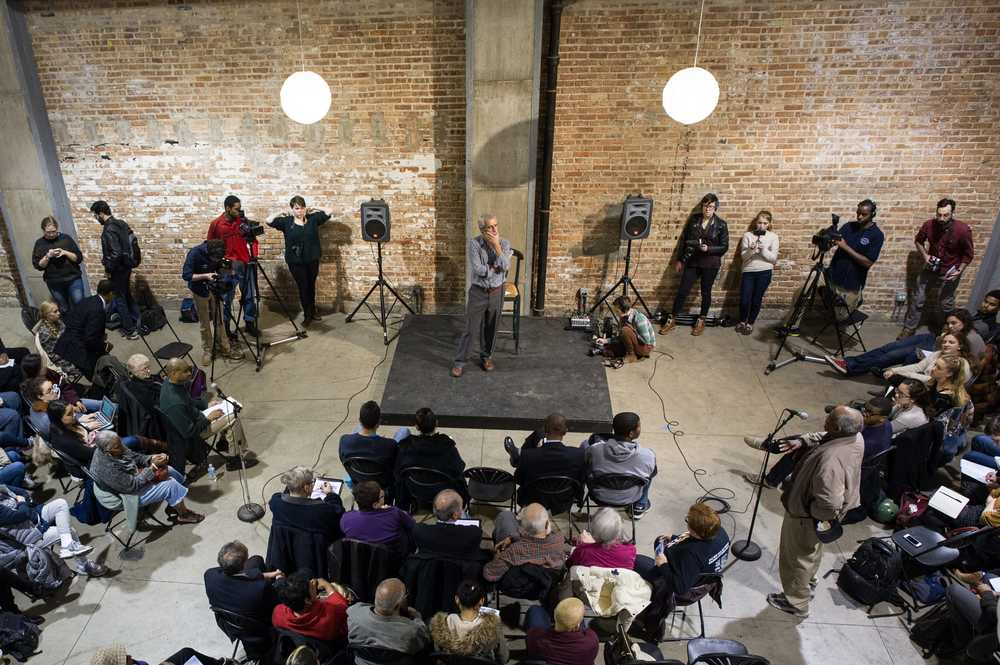 One of Jamie Kalven’s covenants is to always speak up, to always do something when injustice rises up. Whether it’s writing a memoir on his wife’s healing after a violent sexual assault or to reporting on human rights abuses and neglect in the Stateway Gardens public housing project, Kalven refuses to keep quiet.

The longtime social justice warrior and his nonprofit journalism outfit, the Invisible Institute, recently led a shakedown of the city and Chicago Police Department and there’s no stop in sight for the group and their collaborators. There’s more.

“I hired a team of six sailors and we sailed into a typhoon that made us into an even stronger team on the other side,” Kalven says of their work uncovering the Laquan McDonald shooting cover-up and the subsequent media maelstrom that descended upon Chicago once the initial news broke. From there, the controversial police dashcam video was released, indicating that officers lied in their initial incident reports, and, closely following that bombshell, Kalven helmed the release of one of the country’s first large public database of police misconduct records open to the public.

This month Kalven plans to publish his new 20,000-word expose, researched over three years, on the Chicago Police Department’s code of silence, an element of policing that city politicians and the department have long denied. The piece will run online at The Intercept, the journalism website funded by eBay founder Pierre Omidyar. The almond-eyed Kenwood native is confident that the publication will, as he says, stay true to the spirit of whistleblowers covered in the piece.

Kalven has worked on the blue-wall-of-silence investigation for the past three years and began long before his investigation into Laquan McDonald’s death in 2014. The new piece will focus mainly on a federal lawsuit filed against the city in 2012 by veteran narcotics officers Shannon Spalding and Daniel Echeverria. They claim to have received threats on their lives after uncovering police shakedowns of drug dealers and evidence planting as part of an undercover FBI investigation.

In particular, Kalven is curious how the code of silence instills dysfunction in the force and policed vulnerable communities. He wants to get at how reform strategies could shift away from the top-down approach. “Everyone knows who the assholes are in CPD but they don’t share because of the code of silence. So the process of change I’m interested in doesn’t preclude the top down, but how do you create conditions for conscientious officers to be change agents within the department? How do you create the conditions for people in pretty-abandoned neighborhoods that are feeling alienated from civil authority to become change agents and engage?” he asks. 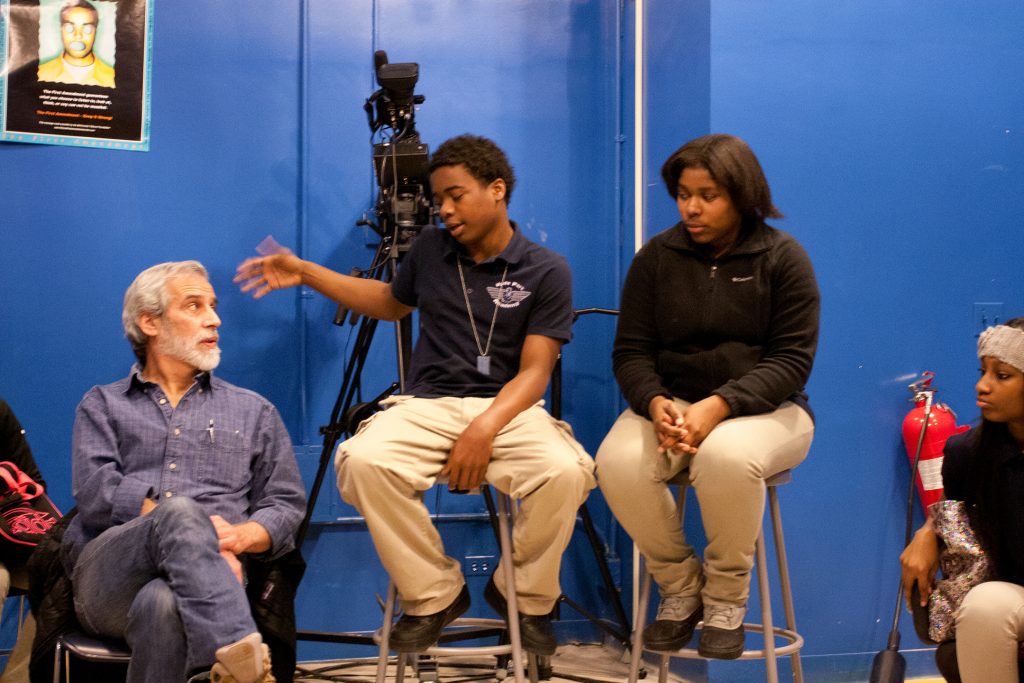 Another victory for the Invisible Institute and their cohorts came this July from an Illinois appellate court ruling that found all police misconduct records going back to 1967 are subject to Freedom of Information Act requests. Those additional documents will bolster Kalven’s already voluminous database.

For those who have known him over the years, he’s one part adventurer—the young man who once rode a motorcycle from Paris to New Delhi where he met his love, co-conspirator and acclaimed photographer Patricia Evans —and one part “odd duck,” as Dawn M. Turner, a former specialist reporter and columnist for the Chicago Tribune, once described him. Tall and approachable, usually in a flannel button-down with a pen in the pocket, Kalven’s calm demeanor and deep laugh have a way of putting you at ease.

Turner, who met Kalven in 2001 while working on an article about newly installed lights in Stateway Gardens, believes his dedication to the city’s abandoned people laid the groundwork for his success in taking on police misconduct. He’s never been afraid to go where other journalists and activists wouldn’t.

“What was wonderful was that he had cultivated a relationship with a group of people who had been abandoned by a lot of people,” Turner recalls. “You had well-to-do, middle-class blacks in the area who might not have committed to Stateway the way Jamie did. Residents there weren’t just abandoned by the white establishment, but others as well. On one hand, going to Stateway wasn’t something that Jamie had to do, and yet he was compelled to do it. And the reasons were more complex than a black/white thing or a well-to-do/poverty thing.”

Despite the accolades he’s received, Kalven has never tried to dominate the national conversation surrounding police reform. “What often looks dramatic, heroic, crusadic or reckless in a life like mine is actually this daily process of movement that carries you to places you would not have expected it to,” says Kalven on his work that started in 1993 and led to being a community organizer, a journalist with his A View from the Ground blog and a fixer at Stateway Gardens. “For me it was more about dailyness, engagement and building relationships but also a genuine fascination that how interesting it is that there could be this city within a city.”

Though he has in one form or another been at this work for the past twenty-three years, Kalven believes recent wins in police accountability are one part mystery and one part dedication to an immersive, day-to-day recording of the “particular blows inflicted by particular hands on particular bodies” in the city by himself and other activists. In particular, on-the-ground work with longtime collaborator Craig Futterman, clinical professor of law and founder of Civil Rights and Police Accountability Project of the Mandel Legal Aid Clinic at the University of Chicago.

The pair, who have worked together on six lawsuits, met in Stateway Gardens in the summer of 2000 and share similar appreciation for the knowledge, experience and perspective that comes from working with those most impacted by urban police practices. “The central importance when doing civil or human rights work is to be informed by and accountable to the people most affected by it,” says Futterman.

Kalven agrees that the work has always been rooted in injuries to real people and the initial work led to challenging the systems that upheld the injustices. “I asked myself what set of institutional conditions would need to exist for this to uphold this system?” he says. “How would the world have to be organized for what I’m witnessing day-to-day for that to be the case?”

Such questions turned out to be incredibly fertile concerning the nature of police misconduct coverups, record keeping and the blue wall of silence that permeates the city.

Futterman and Kalven were initially alone in disavowing the city’s false narrative concerning the execution of seventeen-year-old Laquan McDonald in October 2014, a story which landed Kalven the George Polk Award for Local Reporting for his Slate piece “Sixteen Shots.” Eventually, a police dashcam video was released, bringing national attention to how the police union, police department and city could cover up crimes of misconduct through false narratives and lies. Despite the acclaim, Kalven will be the first to tell you that uncovering the execution of a child is something he never wished to write about, but dutifully did. The truth of McDonald’s death, similar to the tales of other young and murdered black people such as Rekia Boyd, Trayvon Martin and Michael Brown, caused a firestorm in the media, leading many taxpayers to call for police reform.

His team has also proved capable of producing a national model of transparency in law enforcement that’s taken form in the Citizens Police Data Project, a “biopsy of the city’s accountability system,” in a decade-long collaboration with the University of Chicago Law School’s Mandel Legal Aid Clinic. The most expansive public database of its kind on Chicago law enforcement, it contains misconduct complaint records dating back fifteen years for more than 8,900 Chicago Police officers in the form of 56,000 allegations that are at the public’s fingertips on an easy-to-use site. It’s slated to receive many more records, backdated to 1967, if released. Chaclyn Hunt, a civil rights attorney and director of Invisible Institute’s Youth Police Project, believes the most telling information from the dataset will become clear once the decades of data are added. As of now the database contains all available data on police misconduct that the city has released.

Steve Edwards, executive director of the University of Chicago’s Institute of Politics, believes the dogged fight to create that database is typical of Kalven’s commitment to supporting a public dialog. To be clear, the database is free and available to anyone who wants to use it.

“Many people would have kept it [the database] private for their own use, but Kalven instead used it as a public resource,” Edwards says, newly reminded of when the two first met with Kalven acting as a fixer for a WBEZ story Edwards was reporting at Stateway Gardens. “In Stateway he could have hoarded his access and stories, but he opened it to journalists and reporters across Chicago.”

In essence, the database confirms that until 2015, little was done by the city or police to effectively track and perform pattern analyses of shootings, or examine officers and units with high numbers of misconduct complaints in a city still infamous for the murder of Fred Hampton and for allowing Jon Burge and his midnight crew to torture black men into false confessions. Despite the intrigue, Kalven doesn’t fear much in work or life. Devoted, critical and cerebral, he is loved by many and stakes his integrity into his projects. The only fear he has, says Kalven, is not knowing what to do next.

Chicago by far has had the highest number of fatal shootings by the police, totaling more than any other American city from 2010 to 2014. In April, the Police Accountability Task Force’s Recommendations for Reform on misconduct in Chicago reported that, “CPD’s own data gives validity to the widely held belief the police have no regard for the sanctity of life when it comes to people of color.” The report also found that police shoot blacks at alarming rates; of the 404 shootings between 2008 and 2015 in Chicago, seventy-four percent were of blacks.

The Invisible Institute’s data itself shows that ninety-six percent of the 56,000 allegations were found unsustained.

Kalven never expected to have a moment like this, where the city is now facing the possibility of fundamental reform in police accountability.

“The whole situation is a mess and there’s a chance that we won’t realize the possibilities or seize this moment for fundamental reform, but who could have predicted this moment?” he says. “There’s absolutely nothing linear about it.”