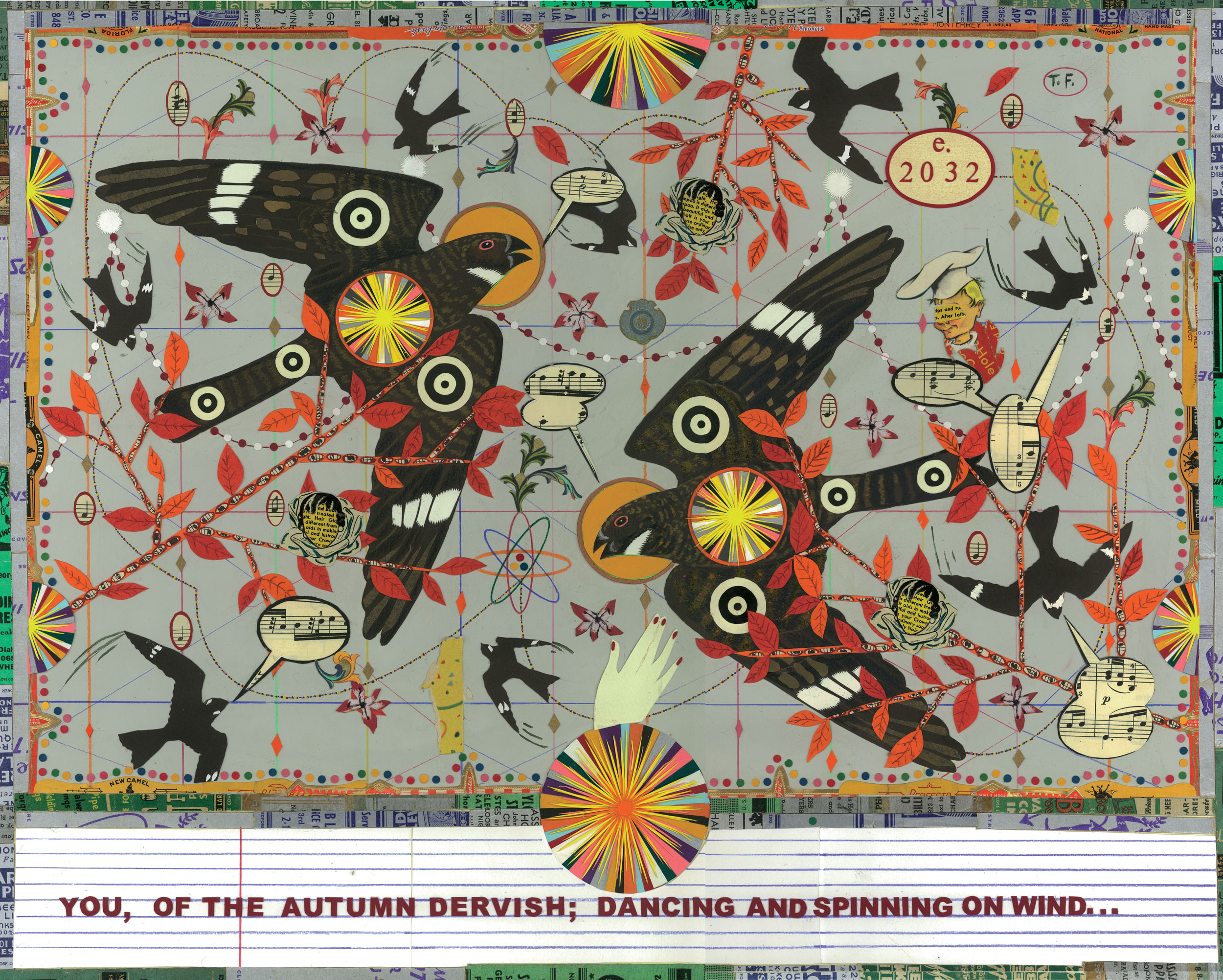 In Chicago, autumn is especially beautiful when all of the trees change colors. If you’re lucky enough to live in a part of the city that is heavily wooded, you know what I mean.

There is a tree in Ukrainian Village on Walton that turns into a fire yellow this time every year. On my way home to Greektown I often take a detour just to see it. All becomes more spare, more visible; the leaves change color and then, sadly, they die their late autumn death with a floating dance to the ground. Late summer/early fall always meant nighthawks to me as a kid: when you could watch them hunt flying insects on the wing, flying low to the ground—they were magical and they still are. When one sees them in flight their boomerang shape favors nothing so much as the shape of sleek fighter-planes with striped wings and small curved beaks. They are truly a joy to watch.

It’s especially lovely right now because we have fall baseball to look forward to. That’s right—write this down… I acknowledged the team from the North Side.

You have to. Right now the Cubs are playing the game better than anyone has in a long time and I must admit that they are way fun to watch. I went to a game last week and even though they lost, there was an unmistakeable optimism around the park. I went with my pal John Cusack who is a fixture at Wrigley and attends damn near every home game. I’m thinking the Cards are regretting that Heyward trade right about now.

It’s cool to see the Cubs on such a roll, even if my heart is with the Sox, who started out this season like a ball of fire, only to do the midseason belly-flop, thus breaking my heart. Next year—the bones of a good team are there; perhaps a new manager can reveal the talent that is already there.

It is also autumn when the Bears usually have a good game or two. They usually don’t shit the bed until October; I guess this year they’re getting an early start.

I love the dog park in autumn, the dogs sense the seasons changing and they have a little more pep in their step. I had to get Chooch fixed a couple of weeks ago so now he isn’t the creepy hump-hump dog I spent six years apologizing for. Though now when he looks up at me, I can read his mind: “I’m his pet. He loves me. He’d do anything for me, but he cut my nuts off!” It’s all good after I give him a treat and, momentarily, he forgets.

This autumn I’m going to my first bird-watching festival, the Rio Grande Birding Festival. I’m going with the great Greg Niese and Larry Kritulis—two ornithologists who will hopefully keep me from embarrassing myself among serious birders.

This is my favorite time to walk in the city, especially around the duck pond in Lincoln Park, or the magic hedge also in Lincoln Park which every spring and fall boasts a wealth of warblers and other migrating birds. Or up by Montrose Beach another rich spot for birding. I haven’t been on the 606 yet; maybe this autumn I will get to it.

It would also be a good time to walk in LaBagh Woods, on the city’s Northwest Side, where an army of volunteers have been cleaning up and restoring this beautiful patch of Chicago wilderness for the last couple of years. Among them is Jeff Skrentny, a prominent birder and environmentalist. These are the transformative acts of citizenship we never hear about or read about— regular working people bringing back some of the wonder of nature on their own time, their own dime and quietly restoring some of the natural world that we’d assumed was lost to us. This place is now host to goshawks, otters, mink and a myriad of forest-dwelling bird species. One of the real ecological success stories in our city.

I also love Halloween, even though now that I am a grown-up I can no longer become a vandalizing miscreant for one day a year. Funny how on Halloween I still want to light a bag of dog-shit on someone’s front stoop, ring the doorbell and hide while watching the taxpayer stomp the flames out. (Attention: to anyone trick or treating at Rahm’s house.)

I would be lying if I didn’t admit that this autumn fills me with a certain amount of dread. There is every possibility that our nation will elect the tangerine ape to the White House. My better sense tells me it isn’t possible, but I also thought this when George W. Bush ran. It’s as if there is a contest to see if the GOP can find a BIGGER dumb-fuck than Bush and still get him elected. Even by the GOP’s paltry standards Trump is a miserable choice, proven by the number of prominent Republicans publicly supporting Clinton.

If the worst happens, if Trump get’s elected? I can always try the flaming-bag-of-dogshit-on-the-front-stoop at the White House next Halloween.