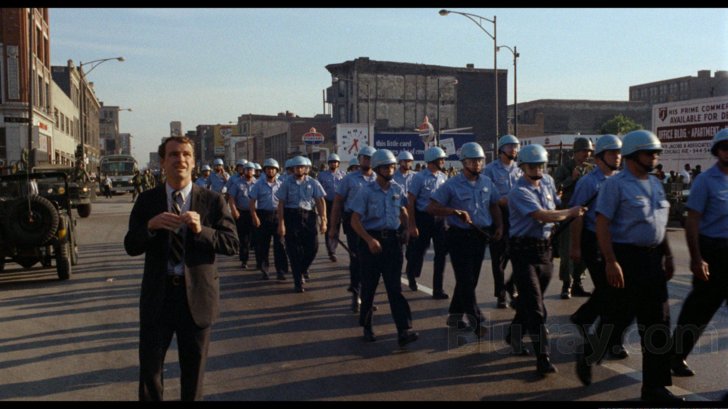 Chicago locations are used as backdrops to movies and television series, but how many movies get the gritty, rub-it-between-your-fingers texture of the streets and sidewalks and alleyways? Here are ten.

“The Untouchables”
Brian De Palma’s “The Untouchables” (1987), written by Chicago-bred David Mamet, is the rare film that invokes the city’s name aloud. Think of when Sean Connery’s cop character gave his key speech to the federal agent portrayed by Kevin Costner. “You said you wanted to get Capone. Do you really wanna get him? You see what I’m saying is, what are you prepared to do? And then what are you prepared to do? They’re not gonna give up the fight, until one of you is dead. You wanna know how to get Capone? They pull a knife, you pull a gun. He sends one of yours to the hospital, you send one of his to the morgue. That’s the Chicago way! Now do you want to do that? Are you ready to do that?”

“Stony Island”
Director Andrew Davis’ low-budget 1978 R&B musical was made after working in activist documentary, but stays street level. His debut features studios and clubs, modest apartments and a palatial spread, but it’s also a song of the South Side and downtown streets of that moment, an achievement he would surpass in a succession of crackling action pictures. In his Chicago-set work, Davis conscientiously captures the city with spatial integrity. Even in his little-seen film “The Package,” more than one-hundred locations were “created” around the world, but all those sets were actually entirely in this town. Other renditions that come to mind include the glossy, high-budget look of street-level work achieved in 1993’s “The Fugitive,” 1985’s “Code of Silence” and 1988’s “Above the Law.”

“Henry: Portrait of a Serial Killer”
In “Henry” (1986), the thirty-year-old debut collaboration of director John McNaughton and producer Steven A. Jones, the banality of horror and the inexplicable urge toward it are placed center frame in a clinical, near-obscene depiction of a serial killer (Michael Rooker). Functioning at a termite level with his disenfranchised working-class characters, “Henry” also draws on celebrations of scuzz in Chicago storefront theater of the 1970s and 1980s. The atmosphere of gut-bucket 1985 Bucktown apartments is matched by a side-street Polish funeral home with a “Daily News” ghost sign, glimpses of Milwaukee Avenue, of neon, of strip clubs and of Lower Wacker as a site of shadows and hunting round for humans. The story is situated largely within walking distance of Wood Street and North Avenue where Henry lives with his henchman Otis. It reeks of Chicago, including a funky long-gone corner grocery, shadowy, brick-cobbled alleys, a “red hots” stand seen by night, a “Fire King” gas station and the fire-red neon of Rose Exterminators. “Henry” is the street-level chronicle of Chicago at a specific time, but also a placid, bleak hell for the devil’s lonely man.

“Candyman”
In 1987, the Chicago Reader’s Steve Bogira wrote “They Came Through The Bathroom Mirror,” a 10,000-word chronicle of murder in a Chicago housing project, partially inspiring the deeply creepy, class-aware “Candyman,” directed in 1992 by Bernard Rose. An urgent Philip Glass score brings a note of University of Chicago tutelage to the game. The film’s most poetic strokes are the aerial shots that draw from the style of 1982’s “Koyaanisqatsi,” also scored by Glass. Those shots offer an angel’s-eye view of the architecture of the Cabrini-Green housing projects and the University of Illinois at Chicago that places them in the same brutalist ilk, equally capable of confining wicked forces.

“Ferris Bueller’s Day Off”
In the long afternoon of “Ferris Bueller’s Day Off,” Chicago landmarks pile up like brightly colored postcards. The Art Institute gets its own shuffle in a self-reflexive scene.  Paintings pop. Children daisy-chain like colorful paper cutouts in front of Gustave Caillebotte’s “Paris Street; Rainy Day.” A tall figure in a red “HOWE 9” jersey stands alone before the figuring of Parisians at play in Georges Seurat’s “A Sunday Afternoon on the Island of La Grande Jatte.” Alan Ruck’s translucent blue eyes fix on details, a woman, a child, paint strokes, texture of canvas, closer, color, now only texture. The character, the viewer has disappeared. “I always thought this painting was sort of like making a movie,” John Hughes once said. “A pointillist style, which, at very, very close to it, you don’t have any idea what you’ve made until you step back from it.”

“Medium Cool”
“Look out Haskell! It’s real!” In Haskell Wexler’s 1969 metafiction “Medium Cool,” shot in the summer of 1968 against a backdrop of the 1969 Democratic Convention, the city of Chicago is tangibly, observantly captured. From impoverished Uptown to the growing tension and sudden crush in and around Grant Park and the International Amphitheater, Wexler doesn’t miss a thing. And that’s even before inserting his keenly left critique of newsgathering and law enforcement. The chant of the day, “The whole world is watching! The whole world is watching!” seeps through the drama, its romance and the rupture between fact and fiction.

“High Fidelity”
John Cusack shepherded this bohemian rhapsody of Wicker Park, circa 2000, collaborating with D.V. DeVincentis and Steve Pink on an adaptation of Nick Hornby’s 1995 London-set novel. Directed by Stephen Frears, Cusack and company also tromp on a particular Chicago latitude and longitude: the zone where Nelson Algren and Studs Terkel once plied their trade. The apocryphal Championship Vinyl, a storefront at Milwaukee Avenue and Honore Street, is not the only small glimpse of other spaces and locations, filigreed into the life of John Cusack’s thirty-year-old wastrel’s fantasy. Other city-specific elements include apartments with bulls-eye lintels; rain-tower-drenched intersections like Damen and Division; Lisa Bonet seen in slivers at the landmark dive, the Rainbo Club, lolling on a lipstick red couch or caught in relief beneath a scallop of terra cotta detailing.

“Mickey One”
Chicago has historically been a place where nonconformist comics can hone their minds in smoky clubs. Standups played clubs like The Gate of Horn, Punchinello’s and Mister Kelly’s.  These jokesters include everyone from up-and-comers like Woody Allen, to old hands like Mort Sahl to troublemakers like Lenny Bruce, who once joked that Chicago was so corrupt a cause of death could be “He wouldn’t listen.” In 1965, a couple years before collaborating on their breakthrough “Bonnie and Clyde,” director Arthur Penn and actor Warren Beatty made “Mickey One” in film-resistant Chicago, capably, if inadvertently, illustrating Bruce’s joke. The film features gangsters and comics, existential dread and intellectual puzzlers, as well as threatening charcoal-on-ice black-and-white alleys lit by French cameraman Ghislain Cloquet a year before Bresson’s “Au hasard Balthazar” (and eleven years before Allen’s “Love & Death”!). “Mickey One” is cold and strange and alien, yet its absurdism, which would likely fit no era, is a compelling phantasm Chicago that presumes you’re guilty until presuming you’re ready to die.

“Risky Business”
“Joel, you wanna know something? Every now and then say, ‘What the fuck.’ ‘What the fuck’ gives you freedom. Freedom brings opportunity. Opportunity makes your future.” Of all the satirical sallies of Paul Brickman’s 1983 “Risky Business,” one deal rises out of the movie to heedless lyricism when a boy meets a woman. In this classic film, which showcases the city’s trains by night, is the story of how motivational speaker-in-the-making Joel Goodsen (Tom Cruise) meets an older woman (Rebecca De Mornay.) She’s a woman of experience and beauty with the willingness to commingle and play and intertwine and to transact public sex at silken speed with hypnotic grace. The El train slows, blurs, breaks into diagonal montage. The moment hopes to sustain, an end never to come. The train slides to the horizon, blue sparks on steel as wheel touches third rail. Brickman shoots it like a casual fantasy from a Buñuel film, and also like something he really wished he had done in his own life, in Chicago.

“Thief”
Rain-slicked streets reflect neon and fire in “Thief,” Michael Mann’s 1981 neo-noir first feature, a movie that shows Chicago as a city of steely blues and sparking orange and gleaming fluorescence and stately neon. Water trucks followed the long nights of the film’s production, the lights of twenty-four-hour delis like the Belden on Clark Street always artfully doubled. Mann persists in his boldly colored nightscapes to the day, including Mann’s reimagining of the interstices of Chicago’s grid system laid atop the pulsing contours of Los Angeles in “Heat” (1995), where, ironically, Los Angeles has never looked more like itself.

[…] “Chicago locations are used as backdrops to movies and television series, but how many movies get the gritty, rub-it-between-your-fingers texture of the streets and sidewalks and alleyways?” Ten Films That Capture The Sensations Of A City, By Ray Pride […]