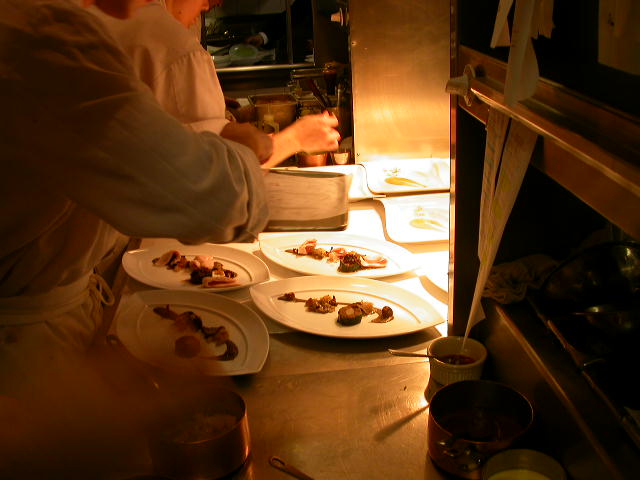 The Union Stockyards established Chicago’s reputation as “Hog Butcher to the World,” an unlovely moniker that has hung around our city’s neck like a bloody albatross. We all love a good steak, but…c’mon! We live in an area of the world that’s remarkably rich in agricultural resources of all kinds, and it’s somewhat galling that out-of-towners arrive craving carnivorous satisfaction when there’s so much more we harvest here, not to mention the obvious fact that, just as in the days of the Stockyards, most of Chicago’s red meat is hauled in from places like Colorado. Although the past year has seen an explosion of wonderful steakhouses in our city, here are a few iconic places that, over the years, have helped throw off the tyranny of animal protein that for too long has been so closely identified with our metropolis.

Le Francais
The Stockyards stopped the slaughter in 1971. Two years later, Jean Banchet opened Le Francais in Wheeling, a French country-style inn that put the Chicago area on the international culinary map. This was at a time, according to Crain’s, “when fine dining, particularly in Chicago, largely consisted of steakhouses.” Eating there in the late seventies, what was most memorable about that meal was the finesse with which Banchet crafted vegetables, particularly a tiny basket, fashioned from a single small tomato, holding a sheaf of miniature French green beans, likely sourced locally. Magnifique!
Closed.

Heartland Café
Michael James and other illustrious lefties founded Heartland Café in 1976, several years after he and others transported to Chicago a Wisconsin pig—Pigasus—which Yippies nominated for president during the 1968 Democratic Convention. Heartland Café was always, and still is, identified on their site as “vegetarian and vegan,” but they nonetheless offer meat to those who feel the need. This early outpost of progressive thought has for years been serving “wholesome food for the mind and body” to, as they say “comrades in Rogers Park and beyond.” Food is sourced from their farm in southwest Wisconsin. Legendary.
7000 N. Glenwood, 773.465.8005, heartlandcafe.com/

Chicago Diner
“Meat-free since ‘83” is the proud boast over the door at Chicago Diner, which Mickey Hornick opened on Halsted after quitting his job as a commodities trader at the Chicago Board of Options. Teaming up with Jo Kaucher, he started this place which was, to say the least, an oddity in north Chicago: a totally vegetarian restaurant. Now with a second location and a cookbook, and it’d be hard to say Chicago Diner was not a forward-looking enterprise for its time and even for this time, thirty-three years later. No meat, ever. The seasonal menu reflects an enduring commitment to sustainable local produce.
3411 N. Halsted, 773.935.6696, veggiediner.com

Charlie Trotter’s
Opening on Armitage in the 1980s, Charlie Trotter’s carried on a French-inflected tradition that honored the vegetable on par with animal protein. A major step in the evolution of our city’s dining sophistication came when the chef inaugurated his vegetable tasting menu. He then published “Vegetables,” a celebration of plant-based dishes that blew minds with finesse and complexity. On the inside cover of many author-inscribed copies, Trotter wrote “What more can be said? Vegetables rule.” Step aside, beefsteak.
Closed.

Green City Market
Higher-end vegetable purveyors used to need a well-heeled customer base to develop their offerings, which is perhaps why both Trotter’s and Green City Market came to life in Lincoln Park. Green City Market offered the opportunity to bring home the same beautiful Midwestern bounty that Chicago chefs used in their own kitchens. Bruce Sherman, Jason Hammel and others shopped for local vegetables side-by-side with amateur chefs and plain old home cooks who were proving, whether dining in or out, that vegetables and other non-meat options could be awe-inspiring. Green City became a model for neighborhood markets all over Chicago.
3411 N. Halsted, 773.935.6696, greencitymarket.org

Lula Café
Since around 2000, Jason Hammel, chef at Lula Café, has been offering Monday “farm dinners” that use local ingredients he picks up on Saturdays at places like Green City Market. “We started out using all vegetables,” Hammel explains, and every week they used whatever local products were looking good. The Lula team brainstorms a menu, tests recipes and serves something new and special to guests every Monday. “We never repeat a menu,” says Hammel, testament not only to the innovative genius of Lula Café but to the incredible bounty of products growing all around us.
2537 N. Kedzie, 773.489.9554, lulacafe.com

Green Zebra
The early aughts also saw the founding of Green Zebra, “a contemporary vegetarian experience” that, like Heartland Café, sometimes responded to the market imperative to flirt with meat. Now, with veganism and vegetarianism both solid lifestyle choices, the Green Zebra menu is strictly vegetable-based. Chef Shawn McClain scored the 2006 James Beard Award for Best Chef Midwest, and though he’s relocated to Vegas, the tradition continues with dishes—of locally sourced fruits and vegetables—that demonstrate just how marvelous menus can be when they forego flesh.
1460 W. Chicago, 312.243.7100

North Pond
After years of serving culinary masterpieces in the midst of Lincoln Park, Bruce Sherman’s wonderful North Pond received a James Beard award in 2012; four years later, it received a Michelin star. Such recognition, though undeniably well-deserved, seemed to come late, as Sherman had for years been serving locally sourced vegetables that easily assumed a place on par with animal protein, shining in all their multi-colored glory, more than just delicious accompaniments, stars in their own right.
2610 N. Cannon, 773.477.5845, northpondrestaurant.com

Sweet Beginnings
With the mushrooming interest in non-meat-based food options, providers of many foods —including insect products—began blossoming around Chicago. Sweet Beginnings, started by Brenda Palms-Barber, leverages overgrown empty lots in North Lawndale to render honey made by bees that are tended by former convicts who are looking to bring something sweet out of their own lives. Taking the focus off meat protein and putting it on other sources of nutrition is proving a way to use the community’s neglected real estate, human and insect resources.
3726 N. Flournoy, 773.638.7058, beelovebuzz.com

Peterson Garden Project
Around Lawrence and Lake Shore Drive, the Peterson Garden Project, brainchild of Chicagoan LaManda Joy, aims to teach city people that they can grow their own food, cook it and create communities based on sustainable and nutritious chow. Local folks help garden, do the kitchen work and give the classes. The Peterson Garden Project is more than an urban farm: it’s the epicenter of a revolution in the way that Chicagoans think about food, where it comes from, and what it means to the city. It is local in a way the Union Stockyards never were—and it smells a whole lot better.
4750 N. Sheridan, 773.878.1064, petersongarden.org

Homestead on the Roof
Like longstanding Uncommon Ground and newcomer Arbor, Homestead on the Roof has an on-site “farm” that provides produce with close to zero carbon footprint. But the ecological consideration is perhaps secondary to the incredible quality of the vegetables served here and at the adjacent West Town Bakery & Diner. Recently, they put out a spectacular side of fresh vegetables picked from their rooftop garden, a beautiful testament to the restraint of the chef who simply chose vegetables that could not be more local and then held back and simply sautéed them, letting their Midwestern beauty shine through.
1924 W. Chicago, 773.332.2354, homesteadontheroof.com

GT Prime
Though perhaps not yet iconic, GT Prime is part of—and transcends—the Chicago steakhouse tradition. “When we started working on the menu,” explains Boka Group’s Kevin Boehm, “we laid out a hundred different steakhouse menus, trying to see what we could do differently.” In a nod to the Midwest’s vegetable riches, “we don’t serve vegetable as ‘sides,’” says Boehm. “All our vegetable dishes are shared.” They could even be entrées. No creamed spinach, rather roasted cauliflower, corn, Brussels sprouts and mushrooms. Vegetables—even at this temple of meat—take a place of shared prominence on the table.
707 N. Wells, 312.600.6305, gtprimerestaurant.com