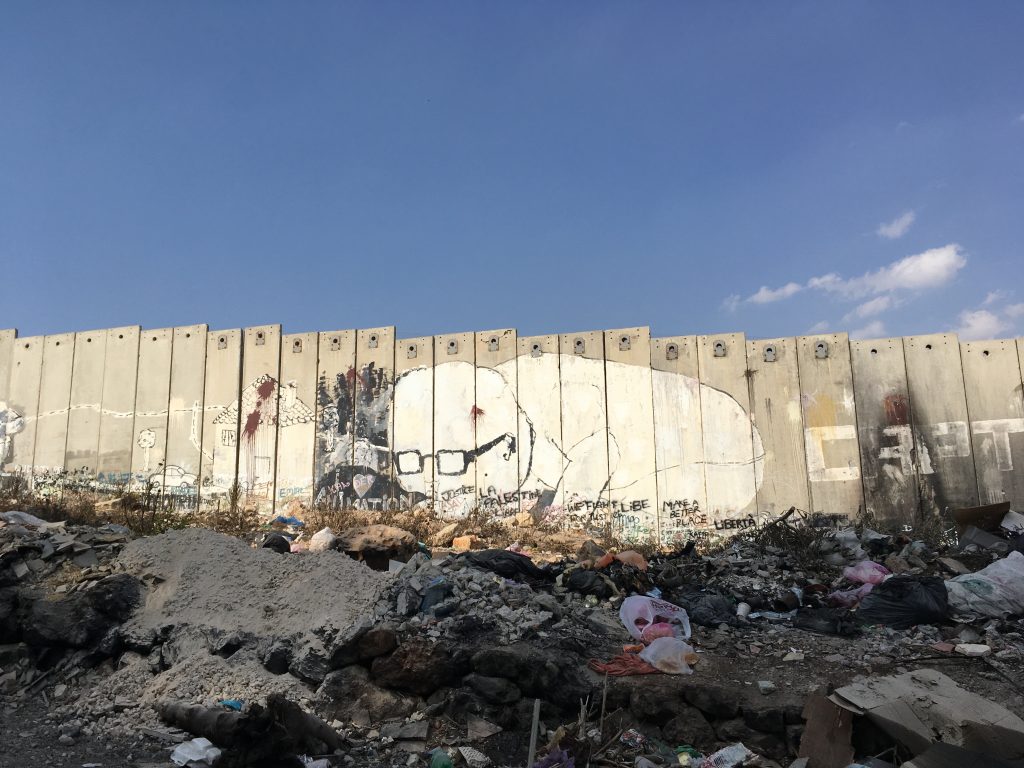 Just over a month ago, I took my first trip to the so-called Holy Land. While many Americans visit the birthplace of Judaism and Christianity to indulge in Biblical tourism, my trip was to see Qalandiya International, a Palestinian-organized art exhibition that takes place every two years in Jerusalem, the Occupied Palestinian Territories, and other satellite sites in the Middle East and Britain. Between Jerusalem and Ramallah—a large, mostly Christian city just to the north in the West Bank—stands the most infamous checkpoint operated by the Israeli military. Named after the town it divides in half, the Qalandiya checkpoint grants daily access to thousands of Palestinians via a maze of razor-wire-topped fences and myriad invasive security procedures in order for them to access work, school and medical attention in Israel. In part, the Qalandiya International exhibition seeks to take back the negative connotations of the name and display the creativity that survives—and thrives—under the Occupation. 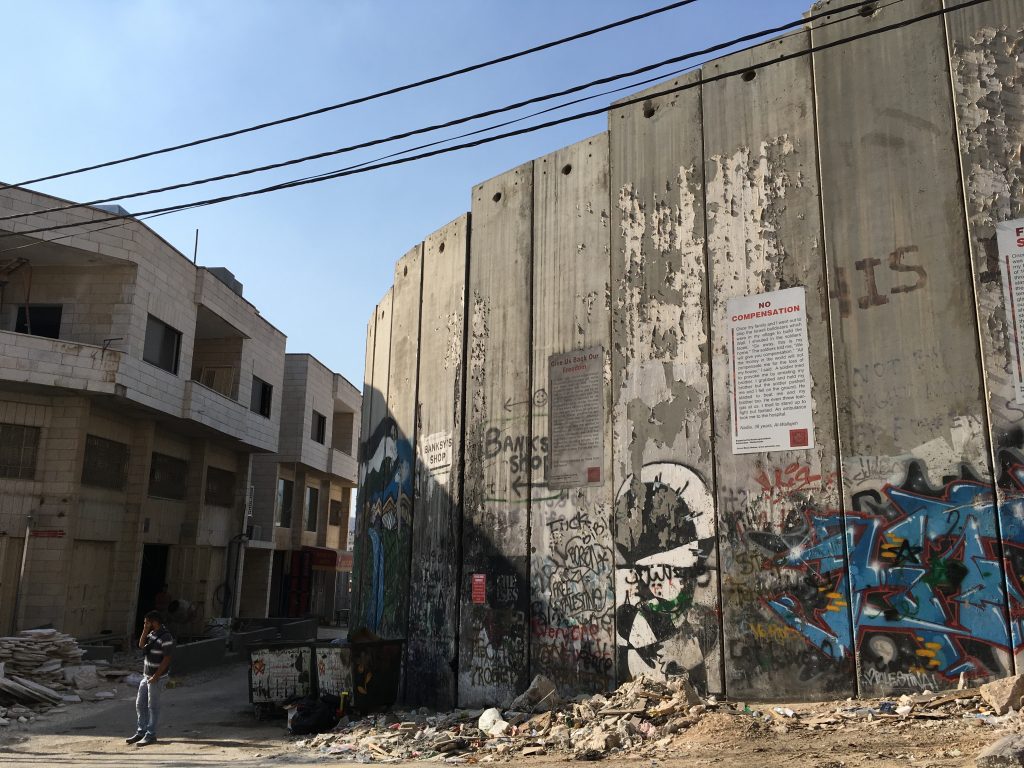 Growing up in a Lutheran family, I learned Biblical geography by listening to scripture readings and sermons every Sunday at church. To me, Jerusalem, Nablus, Jericho and Bethlehem were the places of Judaic and Christian myth, cities whose historical existence had no relation to my American present. It was only in college, when I took a class on contemporary Middle Eastern art, that I learned of a place called Palestine and a people called Palestinians. I had heard of Israel before, and knew several Jewish friends in high school who had visited there on birthright programs, those free trips to Israel offered to Jewish youth in order to instill in them a sense of Zionist nationalism. But in college I learned that Palestine existed next to and underneath the soil of present-day Israel and in that moment I began to understand the deep irony of a Jewish “birthright,” and I also grew to appreciate the political urgency of any project that strengthens an American’s emotional connections to contemporary Israel.

No amount of preparation could have softened the blow of visiting present-day Palestine and Israel. The ubiquitous presence of armed Israeli soldiers, many of them teenagers serving mandatory stints, makes any tourism hard to enjoy, no matter how beautiful the landscape or how captivating the stone streets and buildings of the “Old City.” The separation wall, a concrete edifice twenty-six-feet tall and 440 miles long, makes Palestine the largest ghetto in human history. And yet, most striking about the geography of this region is just how small it all is—if not for the checkpoints and the separation barrier, all of historic Palestine could be traversed by a vehicle in a matter of hours. The distance traveled by Joseph and Mary to Bethlehem for the Roman census took them a day by donkey. Today, it takes twenty minutes by car.

Rather, it would take twenty minutes, if not for the wall and the checkpoints. Near the end of my week in Palestine, I visited Bethlehem, the birthplace of Jesus Christ, currently located in the West Bank. Since 2001, it has been behind the wall. And yet, unlike any other city in the West Bank, Bethlehem finds itself full of pilgrims and tourists every day. All of them converge at the Church of the Nativity, built on the presumed site of Christ’s birth, where Mary laid Jesus down in a manger and swaddled him in cloth. What is most striking about Bethlehem is how much it defies the logic of the Occupation. When entering Israel, travelers are warned to stay away from the Palestinian West Bank. Upon leaving, any indication that you’ve been there subjects you to extensive interrogation and search measures, in order to make sure that you have not been conscripted for terrorism or inadvertently planted with a bomb. A culture of fear enforces the project of segregation. 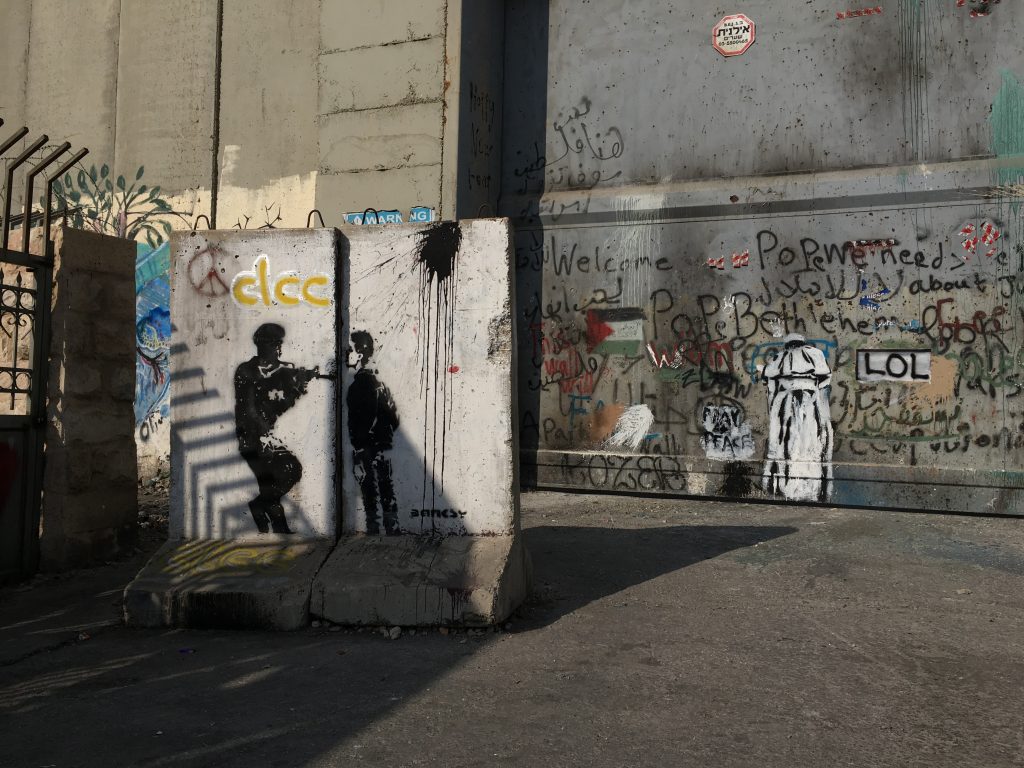 But Bethlehem is visited by so many that its security risk is considered negligible. In short, it’s too religiously important to too many people to subject it to the usual forces of the Occupation. I am no longer a church-goer, but more than ever I now recognize the power of faith in overcoming hatred and difference. Faith, whether religious or humanistically secular, recognizes the good will of all people, and accepts it with good faith. If you ever go to Bethlehem, remember that you are in Palestine, a place with a long history, but also a present, and a future, we hope.