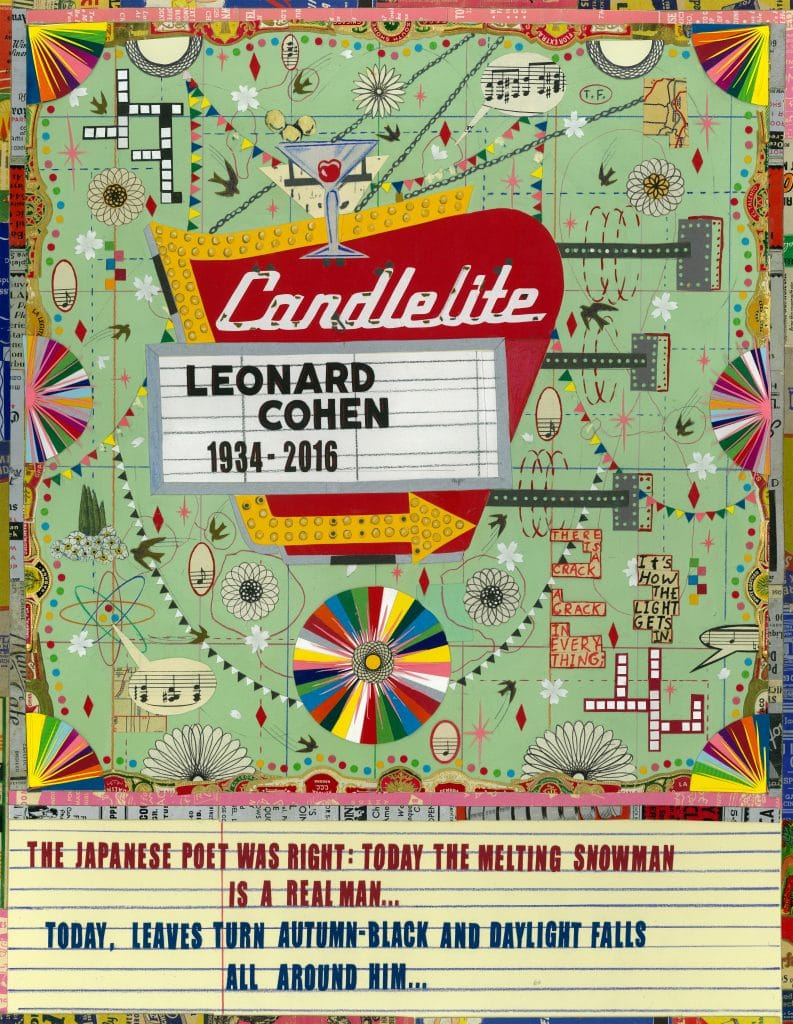 There is a crack, a crack, in everything…It’s how the light gets in…  —Leonard Cohen

If this year were a horse, they’d have taken it out behind the stable and shot the son-of-a-bitch. For this year was more like a rabid beast begging to be put down. One should have known early—around January 10, when Bowie died—that this year would be even more cruel than the passage of time normally is. The year’s mortality harvest started with the great David Bowie and chose as its coda the luminous Leonard Cohen. Were there a Mount Rushmore of Singer-Poets, his face would be there along with Dylan’s.

Along the way, we lost our generation’s James Brown/Jimi Hendrix all rolled into one in Prince, not  to mention Otis Clay, Merle Haggard, Mose Allison, the incandescent Sharon Jones, Leon Russell, country singer Joey Feek, Earth, Wind & Fire’s Maurice White and Glenn Frey. I’m going to stop now because it is a long, brutal and damnably sad roll call.

At the beginning of the year it was still permissible to laugh at the IDEA of a Trump presidency; surely we were not dumb enough to elect this imbecile. Then half of the body politic stayed home; smug in their assurance that the heavy lifting of democracy and freedom was someone else’s responsibility, and here we are: a divided country scrambling for definition with the makings of a dictatorship taking shape. Somewhere along the line in this process we forgot that freedom demands participation, and that a great many suffering Americans could not make themselves heard. In our blind arrogance (mine included), we assumed there were more of us than there were of them. In fact we blithely and haughtily accepted a place of “Us and Them.” We forgot all about “We the People.”

In their desperation and anger, THEM voted for Trump. The process wouldn’t serve them or listen to them, so they voted for a demagogue. A drowning man will grab a snake.

I wonder how many of us will be able to think of the Cubs winning the World Series in 2016 without this memory being conflated with Trump’s victory? This aside, it is one of the very few bright spots in this miserable year.

The oil profiteers being forced to stand down in North Dakota also marks one of the only victories of First Nation peoples in American history. That we’ve never upheld a single treaty made with the 562 First Nation tribes is a lasting and ominous reminder of the legacy of genocide, murder and wholesale theft that comprises the American Story. Face it: We live on stolen property. Standing Rock is hopefully the finishing narrative for the endless tragedy that has been inflicted upon indigenous peoples.

Chicago got more expensive: Rahm’s monster tax hike got punted up between our cheeks as soon as he was re-elected. I keep looking for a bright spot in his disastrous tenure as Mayor and I thought I’d found one when he announced Chicago would not change from being a Sanctuary City, only to realize he did this about five days after New York’s Mayor De Blasio had done so first.

I don’t know how he’s avoided being charged with obstruction of justice behind the out-and-out murder of Laquan McDonald and subsequent quashing of videotaped evidence of this crime. It does make one wonder if he were able to call in a political debt from on high; and it makes one despair of our rotten system and broken, divided city yet again.

There were over 700 murders in Chicago in 2016—almost 300 more than last year. Bangers routinely go to Indiana and Wisconsin to buy their handguns with impunity. It seems police chief Eddie Johnson is helpless to stop the carnage.

I am immensely grateful for our activists—lawyer Jerry Boyle, who is on the front lines of every civil action and protest, making sure those arrested have access to legal representation; Black Lives Matter activist Malcolm London, as well as activist Rebecca Reynolds, who helped steer Kim Foxx’s campaign to unseat Anita Alvarez. Kim Foxx represents an attorney who has lived the life that has tempered her with great empathy and a great desire to see justice served equitably and fairly. These are but a few of those who hold our city together with their conviction and devotion to fair play.

These folks give me great hope. And staring down the barrel of 2017, Hope is the best, and maybe the only currency we have.