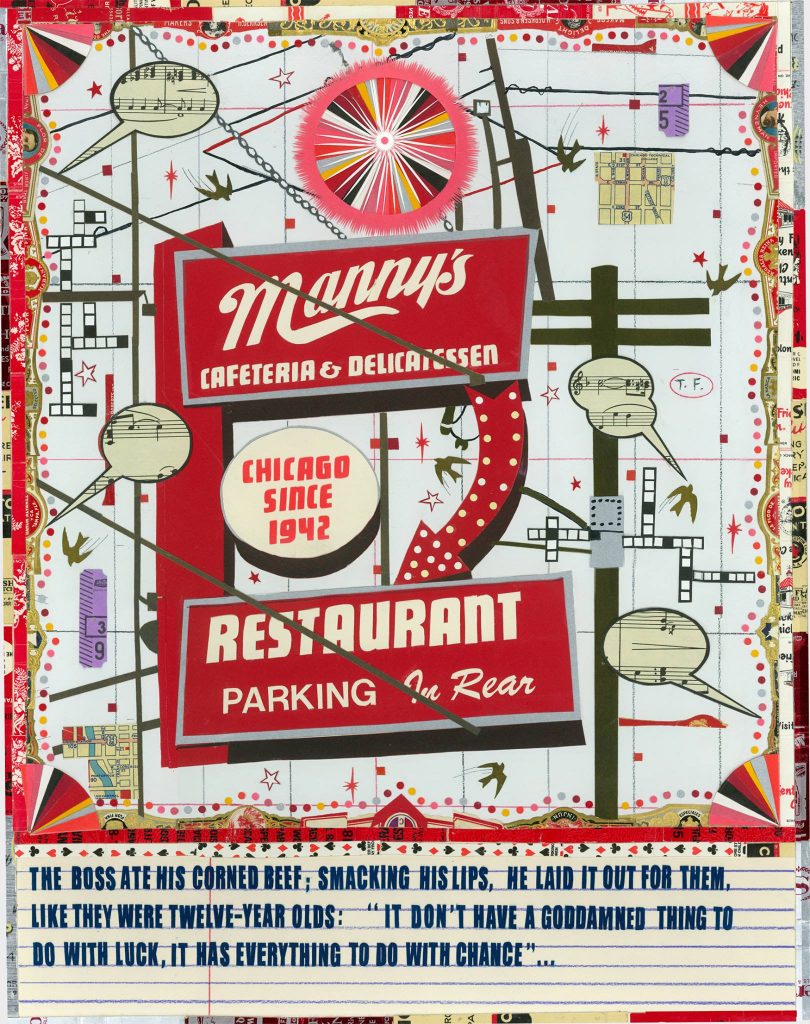 You go through the cafeteria line at Manny’s and you marvel: Brisket. Corned beef and pastrami sandwiches as big as your head—and as garlicky as a Greek waiter. A heart attack on a plate accompanied by a huge salty dill pickle and a potato latke. You yuck it up with the sandwich guy and he enhances your pile of meat even more.

You can eat here. Meaty stuff. The kind of meal you want before they execute you. The kind of sandwich you eat with a friend, then take the other half home for dinner, and breakfast the next day… and maybe lunch as well.

Look around. There are City Hall creatures, cops, aldermen, Streets and San guys with yellow neon vests and meter maids shoveling down slices of pie. There are deals being cut. Bonds being haggled over. Ticket quotas pondered and the grimy business of the sidewalk being brokered. The preferred music? The ringing of the cash register. The preferred currency: green cash money.

They frown a little when you hand them the debit card with the chip in it; it’s another pain-in-the-ass-thing the new century has grafted onto everyone. You also get the shit-eye if you are one of those who babbles on your cellphone in the middle of the cafeteria line, even at your table. People are trying to eat numb-nuts. Nobody wants to hear your bullshit here. Take it outside schmuck-o, because in here, people are eating or working—like it’s always been, since Moses.

I see a guy slide an envelope across the table with a wry smile: “Christmas card” he says. The guy across from him wordlessly puts it in the kangaroo pocket of his hoodie without so much as looking up or saying thank you.

There is a lady walking an Irish Wolfhound in front of the window. The dog is excited; he can smell the meaty goodness. I also notice he is wearing dog boots, and not happily. A guy comments: “Jesus H Christ, she put shoes on the dog. Look! he’s trying to kick’em off! He don’t want to look like a jag-off in front ‘a the other dogs…”  They meander by, the hound alternately fighting with his goofy boots and sniffing at the meaty air he is enshrouded in. He looks confused.

There is a valet there—a big burly guy in a neon yellow vest, quietly watching the street and reading the traffic for the slow-roll of an incoming parking task. They’ve remodeled the joint but it hasn’t taken away any of the atmosphere in the least—and this place has atmosphere in spades.

If someone asked me to take them to ONE place which defines this city, I might take them here. Or to night court at 26th and California. Or Ricobene’s for a breaded steak sang’wich, Or Army and Lou’s, except… it’s gone now; and maybe the bounty of great Mexican joints in Pilsen. I’d also include the Maxwell Street Polish and hotdog joints—the one built in the middle of a used car lot at 56th and Western is among my favorites.

These places are adorned in the colors of urgency, of exigence: rich reds, yellows and sequential blinking lights. As a kid I thought these places were what a heaven was supposed to look like, a carnival of lights and color and food smells. There was this promise here, that you would never be hungry, and the world was not merely a well-lit nowhere, but a wondrous place full of lights and magic and hope. It was a mystery that you solved every time it got dark and those lights were on.

I can’t eat Manny’s fine sandwiches anymore; my cardiologists would blow a gasket. But I can watch as other people enjoy them. About the only thing I can eat there anymore is the jello and the coleslaw, and who the fuck wants to eat that?

For me, the best thing to eat there was the pastrami. Damn it is good—greasy, salty, garlicky and piled high on rye with a big slice of dill pickle and a latke. This might be the best thing I have ever eaten. I never could get through a whole sandwich, but my dog Chooch was very happy to share the second half with me a day later. We were smelling very special after a Manny’s binge—I always blamed the dog.

It is one of those places where one is happy for the lack of change. Sure, they remodeled it, but damn if they didn’t preserve the character of the place—inhabited by and for working people.

There are no conversations about beer programs, or sommeliers. This is belly to belly, elbow to elbow—a joint that caters to the elementally hungry. The kind of hungry you get if you operate a jackhammer or a cement mixer; or hoist dumpsters for Streets and San. There is nothing delicate here. Even the City Hall guys are the worker bees—the ones who actually DO the work their bosses take credit for on the news. It is one of those eateries that grinds out the goods and tastes like the city we claim to be, hearty and good.

One of the best things to do here is to just overhear stuff—not eavesdrop—but overhear the great thoughts of people on break from work…airing out things they don’t say around their bosses. Things like this:

“You can’t get it with too much peppers—you don’t want the sang’wich your eatin’…to be eatin’ YOU…”
“If I had a face like his…I’d paint my ass and walk on my hands.”
“Oh yeah, he’s got a face for radio.”

I love hearing the curbside philosophies and stories, the hard-earned bits of knowledge that come from punching a clock and grinding it out forty hours at a time and wondering what the hell it is all for—the American horse sense of the people who built this city. This is the school nobody ever tells you about: the native intelligence that comes from being a citizen, the act of faith that working people carry out every day that keeps this city lurching along. One time when I was there years ago, I heard this gem: “My boss laid it out for me like I was a fuckin’ twelve-year-old. He says, ‘It don’t have a goddamn thing to do with luck, pal… it’s got everything to do with chance.'”

Which, for some reason, makes more sense to me every day that I live.