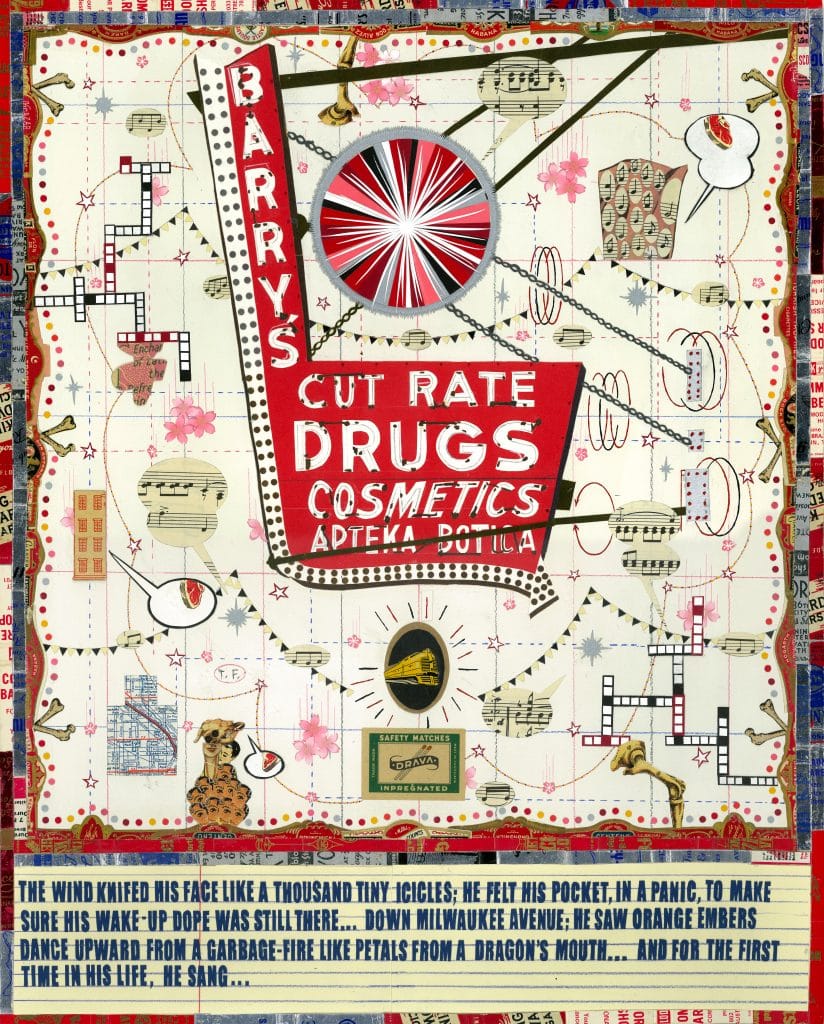 When Milwaukee Avenue was the Polish Michigan Avenue, there were signs like this up and down that thoroughfare. Miraculously, a lot of them still survive. Big, with neon and bright reds and small sequential lightbulbs, they competed for your attention. Milwaukee Avenue was the main drag for the Polish-American experience in Chicago. It is hard to sometimes get a whiff of this community anymore. Since the early nineties this mostly Polish and Latino community has been taken over by nose rings, man-buns and the tyranny of cyclists.

After years of decline, it suddenly became chic. What was once a perfectly good bad neighborhood now sports Lululemon, Jimmy John’s and a Taco Bell where you can get shit-faced. Jesus, that’s all you need—dip-shits from Tinley Park projectile-puking gorditas all over the sidewalk.

My pal John McNaughton, director of such films as “Wild Things,” “Mad Dog and Glory” and the masterpiece “Henry: Portrait of a Serial Killer,” moved into the loft space above Barry’s Drugs store around 1980. It was a big loft space that he paid $175 bucks a month for. The building was owned by the Golin family, who also owned and operated the drug store since the late 1940s. It was named for Mr. Golin’s first born son.

Before becoming one of our finest and most original American directors, McNaughton lived in New Orleans—building sailboats, for some years, as well as being a carny for a stretch with the Royal American Shows, one of the biggest traveling carnivals in North America. John didn’t own a television then, he watched Milwaukee Avenue. “It was way better than television—more drama than you can imagine—and WAY more entertaining.”

He recalled a young ne’er-do-well attempting to menace an older homeless guy with a golf club. The tables turned on him, only to have the old guy end up pummeling the shit out of the punk with his very own golf club. This memory makes McNaughton laugh so hard I can tell he is almost crying.

Then there was the time he discovered a surprise on his doorstep. “One time… I stepped outside my door and damn near stepped in a pile of grumpies… not DOG grumpies, but HUMAN grumpies… good morning…”.   They don’t put that in the real estate brochures.

We both remembered a homeless junkie named Frankie whom we’d taken a liking to. He often hung around the old Prop Thtr when Prop was located in the former garage on North Avenue. For years Frankie hung around six corners cadging change, copping dope and occasionally getting hit by the bus. Frankie once walked into Prop Thtr’s lobby on a sub-zero night, wearing a threadbare raincoat and what looked like a hospital gown and that was it. As he shook off the cold he said: “It’s colder than a nun’s twat on Good Friday.” Several patrons of the theater spit out their drinks laughing.

He was a reminder of the Algren novels that had been set here forty years earlier. Frankie died of exposure while sleeping up under the highway. I miss him.

This was when the Busy Bee was still open and on any given day you could see Eddie Balchowsky, the one-armed piano player, artist, poet, Spanish Civil War vet holding up his corner of the joint with stories and jokes. Damn near every artist on the North Side drifted through this diner at one time or another. This joint was the quickest place to kill a hangover. Sophie, the woman who owned the place, had a special soup that was more like a stew; and damn if if didn’t vanquish the hangover—it also gave you heartburn—but it restored you to life. On weekend mornings, bleary-eyed artists, musicians, cops and assorted dirtbags would be slurping this shit up with abandon. It didn’t taste particularly great (like a weird borscht), but it stopped your head from pounding and your brains from leaking out your ears.

The Bee was on Damen and when it closed this was the first shot across the bow. Soon Becky and Chad and their fucking strollers and spoiled offspring would invade. With their sweaters tied around their necks and buds in their ears, they destroyed the city’s best slice of bohemia. Damen and Milwaukee, the stomping ground of Royko and Algren, is now the Land of the Bros—full of dipshits with yoga pants and backward baseball hats, fist-bumping each other on every corner. Oh joy.

McNaughton made the most of being there—he shot music videos there as well as a couple of scenes from “Henry.” Milwaukee Avenue was the perfect backdrop for the film’s gritty atmosphere—a shot of Michael Rooker driving by Barry’s going south.

One time while shooting a music video for George Faber and Stronghold, McNaughton’s film was stolen by some piss-bums. With the aid of some hookers, for ten dollars they helped him retrieve it at a scrap lot nearby at three in the morning. McNaughton and his friends were all packing knives. “We were broke, we couldn’t afford guns.”

McNaughton soaked up the Milwaukee Avenue experience while this was still a city of stories and this avenue was filled with the immigrants rough poetry, sweat and laughter. People like the Golins—his landlord was a great guy who would often let him make repairs in exchange for the rent when he was financially light. “Barry’s father once told me that nobody under the Golin roof goes hungry,” adding “both Mr. Golin and his son Barry, who the store is named for, could not have been more kind to me…they really helped me out.”