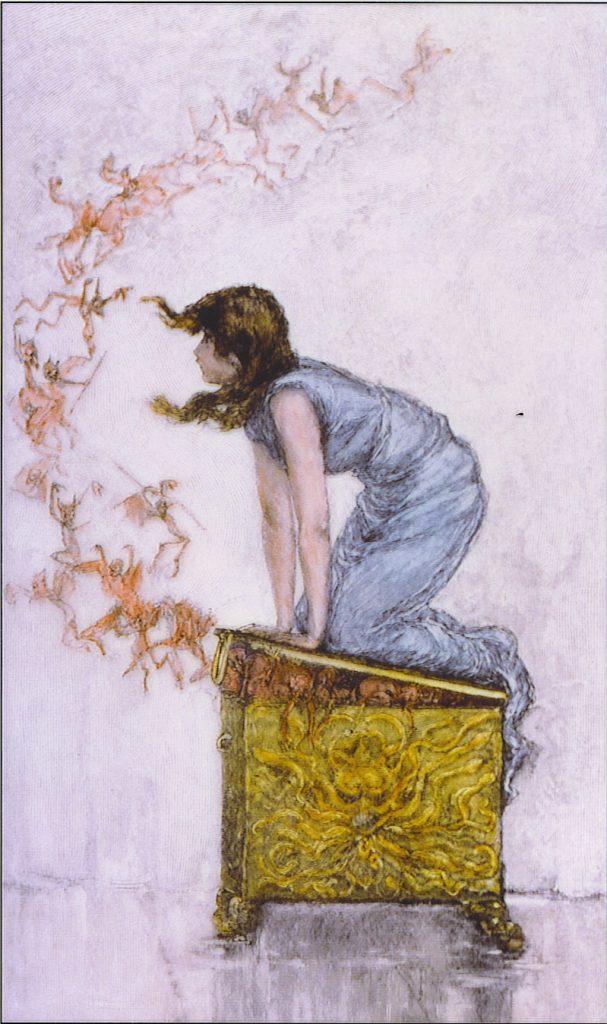 Pandora trying to close the box that she had opened out of curiosity. The evils of the world taunt her as they escape. Engraving based on a painting by F. S. Church.

The English language has always fascinated me. Growing up, I was fluent in both Hindi and English. Although Hindi has a delicate cadence all its own, I didn’t find it to be quite as playful. There weren’t countless synonyms to describe the precise state of one’s happiness or a dozen ways to explain the warm earthy scent that rises from a lush open field recently lavished by rain. But I suppose everything has points of weakness. Not even language stays the same, since the meaning of certain words morph as we age.

Robin Williams is quoted as having said, “No matter what people tell you, words and ideas can change the world.” Now more than ever, I believe that holds to be true. Although Barack Obama and Donald Trump are drastically different people, both were elected because of their promise and call for change. We remain divided at this time because of our own ideologies and those of our new president. Whether you support Trump’s opinions and actions or not, we all strive to find peace in some form, but words like tolerance are what hold us back.

From the time we are children, we associate tolerance with a pain threshold. Tolerating the dull ache under our foot from a pebble in our shoe or, as teenagers, tolerating the long commute to school during inclement weather and then, as adults, tolerating others, their way of life and their beliefs. In every sense of the word, tolerance means coming to terms with something because we have to endure it, not because we want to. So when we say we need to have racial or religious tolerance, we are associating it with something uncomfortable, something we don’t want to do—a metaphorical pebble in our shoe.

Tolerance is the equivalent of settling. The word might seem ordinary and harmless, maybe even positive because many parents and schools pride themselves on teaching it at home or in the classroom, but if the foundation is unstable, so is its message.

The fact is, the word itself is tainted. Tolerance does not apply to the majority, but is contextually fashioned to encompass only outsiders: those with religious backgrounds that differ from the majority, those whose sexual orientation is not deemed as “the norm,” those who don’t look like most of the people in mainstream media and so on.

As a Muslim-American who came of age in a post-9/11 America, I can tell you that the last thing someone like me who comes from a persecuted religion wants to hear is that my religion and my existence is merely tolerated. Telling anyone that they are tolerated is taking the easy way out because you have decided it isn’t worth your time to learn about them yourself. There is no gray area when it comes to acceptance. Either you accept someone or you don’t. We cannot attain the change we so desperately seek when the words we use are inconsistent with the message we are trying to convey.

I have read and heard hundreds and possibly thousands of negative things said about my religion, but I still don’t think that the vast majority of people who voted for Trump are inherently racist and hateful, I think they are misinformed.

If you watched the first ten minutes of Saturday Night Live the day following Trump’s inauguration, you would have heard host Aziz Ansari comment on whites who think brown people don’t belong in America. “I think part of the problem is a lot of these people, they just haven’t interacted with any brown people in their normal life. The only people they see are these monsters in the news who are just a drop in the ocean. Maybe what needs to happen is when they do the news report, they should do a second report about some other brown people that are just up to normal stuff—just to calm those people down.”

He is of course, talking about Muslims, but this principle can be applied to the negative perception some people have about Latinos, African Americans, the disabled, LGBTQs, etc. People are afraid of what they do not know.

Tolerance should not be celebrated and so long as it is, we cannot make real progress. Politics aside, our collective desire for change and peace is what brings us together. If the Women’s March all around the globe has taught us anything, it’s that fear and hate does not bring about change and that we are stronger together than we are apart.

So stay strong. Reject tolerance and instead, opt to formulate genuine understanding. And as Michelle Obama said in her final address as first lady, “Don’t be afraid. Be focused. Be determined. Be hopeful. Be empowered. Empower yourself with a good education. Then get out there and use that education to build a country worthy of your boundless promise. Lead by example with hope—never fear.”