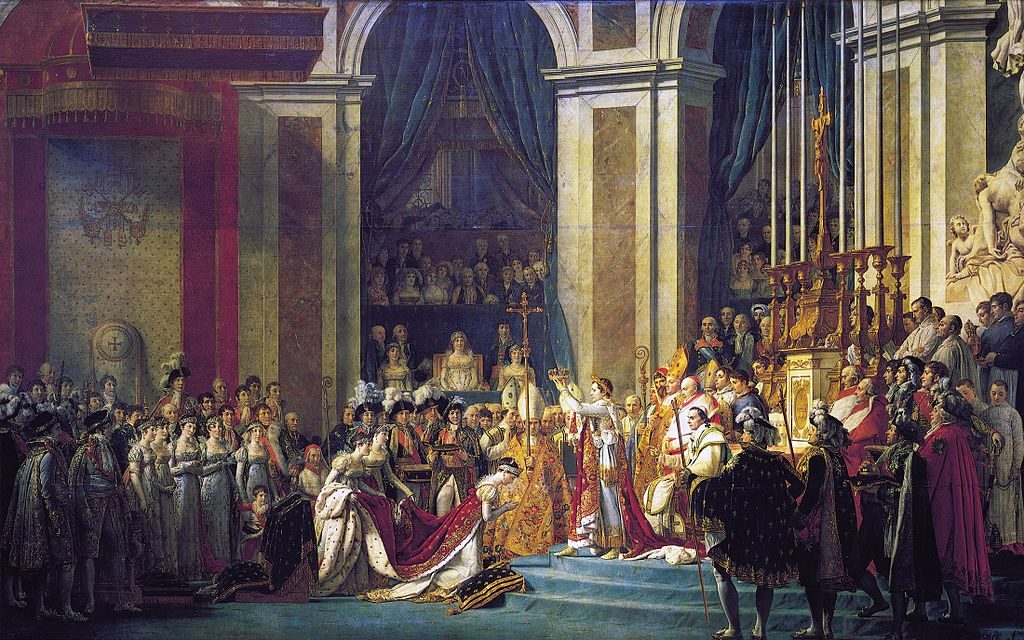 ARIES (March 21-April 19): Your reputation is in a state of fermentation. Will this process ultimately produce the metaphorical equivalent of fine wine or else something more like pungent cheese? The answer to that question will depend on how much integrity you express as you wield your clout. Be as charismatic as you dare, yes, but always in service to the greater good rather than to self-aggrandizement. You can accomplish wonders if you are saucy and classy, but you’ll spawn blunders if you’re saucy and bossy.

TAURUS (April 20-May 20): Using a blend of warfare and diplomacy, Napoleon extended French control over much of Western Europe. In 1804, he decided to formalize his growing sovereignty with a coronation ceremony. He departed from tradition, however. For many centuries, French kings had been crowned by the Pope. But on this occasion, Napoleon took the imperial crown from Pope Pius VII and placed it on his own head. Historian David J. Markham writes that he “was simply symbolizing that he was becoming emperor based on his own merits and the will of the people, not because of some religious consecration.” According to my reading of the astrological omens, Taurus, you have the right to perform a comparable gesture. Don’t wait for some authority to crown you. Crown yourself.

GEMINI (May 21-June 20): Have you heard the fable about the four blind men who come upon an elephant for the first time? The first man feels the tail and declares that the thing they’ve encountered must be a rope. The second touches one of the elephant’s legs and says that they are in the presence of a tree. The third strokes the trunk and assumes it’s a snake. Putting his hand on a tusk, the fourth man asserts that it’s a spear. I predict that this fable will NOT apply to you in the coming weeks, Gemini. You won’t focus on just one aspect of the whole and think it’s the whole. Other people in your sphere may get fooled by shortsightedness, but you will see the big picture.

CANCER (June 21-July 22): For now, at least, your brain is your primary erogenous zone. I suspect it will be generating some of your sexiest thoughts ever. To be clear, not all of these erupting streams of bliss will directly involve the sweet, snaky mysteries of wrapping your physical body around another’s. Some of the erotic pleasure will come in the form of epiphanies that awaken sleeping parts of your soul. Others might arrive as revelations that chase away months’ worth of confusion. Still others could be creative breakthroughs that liberate you from a form of bondage you’ve wrongly accepted as necessary.

LEO (July 23-Aug. 22): Human beings upload 300 hours of videos to YouTube every minute of every day. Among that swirling flow is a hefty amount of footage devoted exclusively to the amusing behavior of cats. Researchers estimate there are now more than two million clips of feline shenanigans. Despite the stiff competition, I suspect there’s a much better chance than usual that your cat video will go viral if you upload it in the coming weeks. Why? In general, you Leos now have a sixth sense about how to get noticed. You know what you need to do to express yourself confidently and attract attention—not just in regards to your cats, but anything that’s important to you.

VIRGO (Aug. 23-Sept. 22): I know you haven’t literally been wrestling and wrangling with a sweaty angel. But if I were going to tell a fairy tale about your life lately, I’d be tempted to say this: Your rumble with the sweaty angel is not finished. In fact, the best and holiest part is still to come. But right now you have cosmic permission to take a short break and rest a while. During the lull, ratchet up your determination to learn all you can from your friendly “struggle.” Try to figure out what you’ve been missing about the true nature of the sweaty angel. Vow to become a stronger advocate for yourself and a more rigorous revealer of the wild truth.

LIBRA (Sept. 23-Oct. 22): Even if you’re not an occult wizard or pagan priestess, I suspect you now have the power to conjure benevolent love spells. There’s a caveat, however: They will only work if you cast them on yourself. Flinging them at other people would backfire. But if you do accept that limitation, you’ll be able to invoke a big dose of romantic mojo from both your lower depths and your higher self. Inspiration will be abundantly available as you work to reinvigorate your approach to intimacy and togetherness.

SCORPIO (Oct. 23-Nov. 21): Here’s some advice from Scorpio writer Norman Rush: “The main effort of arranging your life should be to progressively reduce the amount of time required to decently maintain yourself so that you can have all the time you want for reading.” It’s understandable that a language specialist like Rush would make the final word of the previous sentence “reading.” But you might choose a different word. And I invite you to do just that. The coming weeks will be an excellent time to devotedly carve out more time to do The Most Important Thing in Your Life.

SAGITTARIUS (Nov. 22-Dec. 21): Sixteenth-century Italian painter Titian was renowned for his brilliant use of color. He was also prolific, versatile and influential. In 2011, one of his paintings sold for $16.9 million. But one of his contemporaries, the incomparable Michelangelo, said that Titian could have been an even greater artist if he had ever mastered the art of drawing. It seems that Titian skipped a step in his early development. Is there any way that your path resembles Titian’s, Sagittarius? Did you neglect to cultivate a basic skill that has subtly (or not so subtly) handicapped your growth ever since? If so, the coming weeks and months will be an excellent time to fix the glitch.

CAPRICORN (Dec. 22-Jan. 19): Our obsessive use of digital devices has diminished our power to focus. According to a study by Microsoft, the average human attention span has shrunk to eight seconds—one second less than that of a typical goldfish. I’m guessing, though, that you Capricorns will buck this trend in the coming weeks. Your ability to concentrate may be exceptional even by pre-Internet standards. I hope you’ll take advantage of this fortunate anomaly to get a lot of important work and play done.

AQUARIUS (Jan. 20-Feb. 18): The time is now, Brave Aquarius. Be audacious about improving the big little things in your life. (That’s not a typo. I did indeed use the term “big little things.”) For example: Seek out or demand more engaging responsibilities. Bring your penetrating questions to sphinx-like authorities. Go in search of more useful riddles. Redesign the daily rhythm to better meet your unique needs. Refuse “necessary” boredom that’s not truly necessary. Trust what actually works, not what’s merely attractive. Does all that seem too bold and brazen for you to pull off? I assure you that it’s not. You have more clout than you imagine. You also have a growing faith in your own power to make subtle fundamental shifts. (That’s not a typo. I did indeed use the term “subtle fundamental shifts.”)

PISCES (Feb. 19-March 20): “Love does not at first mean merging, surrendering, and uniting with another person,” wrote the poet Rilke, “for what would a union be of two people who are unclarified, unfinished and still incoherent?” That’s an excellent meditation for you to entertain during the Valentine season, Pisces. You’re in the right frame of mind to think about how you could change and educate yourself so as to get the most out of your intimate alliances. Love “is a high inducement for the individual to ripen,” Rilke said, “to become something, to become a world for the sake of another person.” (Thanks to Stephen Mitchell for much of this translation.)

Homework: Don’t get back to where you once belonged. Go forward to where you’ve got to belong in the future. Testify at Freewillastrology.com.