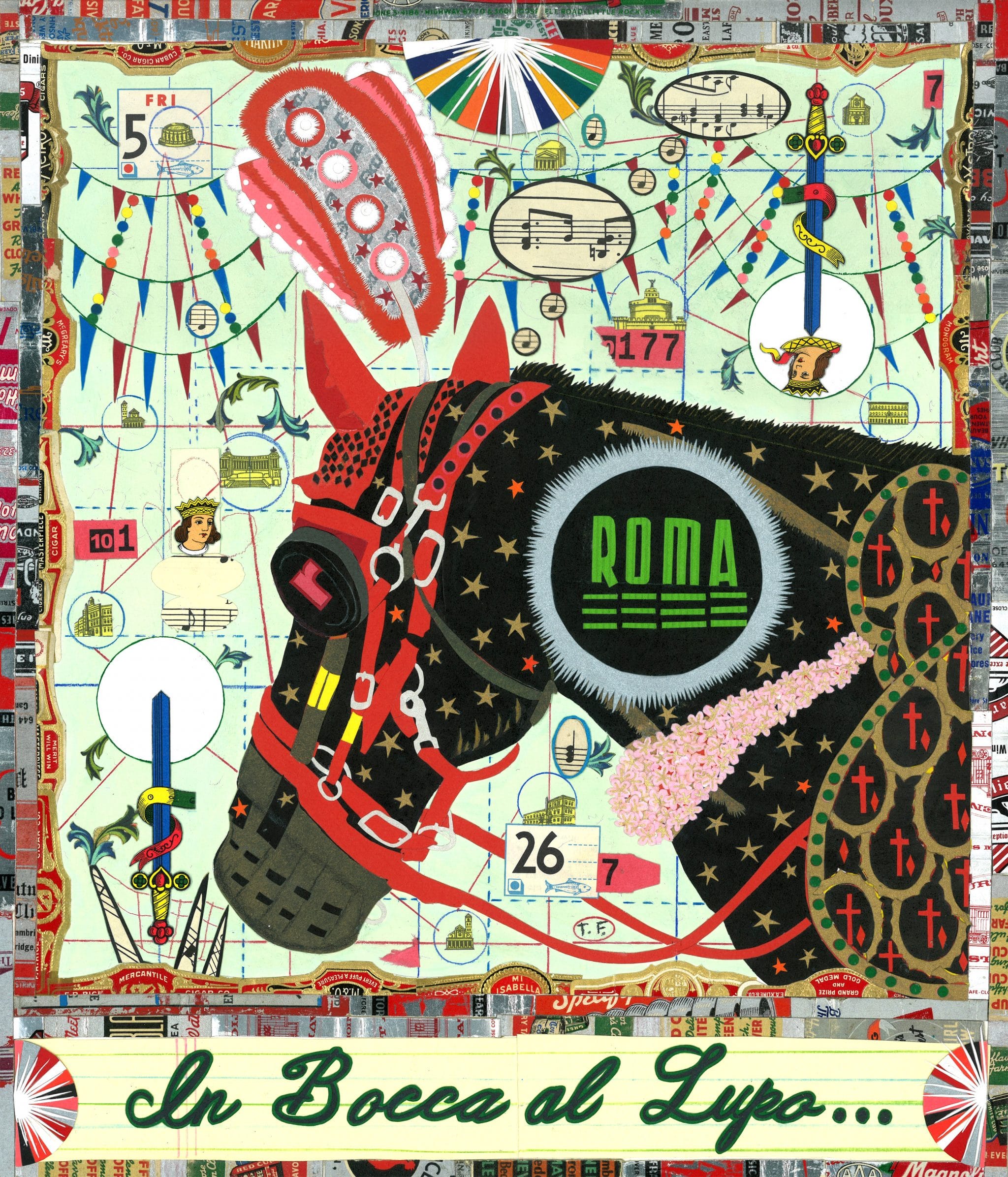 In Rome, like any big city that depends a good deal on tourism, they still have horse-drawn cabs with sturdy draft horses pulling them. These horses often stand twelve-to-fifteen hours a day hauling pain-in-the-ass tourists around. I’ve always despised this practice—it’s awful for the horses, who often work in ninety-degree heat (at least in Chicago they do). A couple of times in Chicago, these fine animals have dropped dead right on Pearson Street. In Rome it is no different, except they dress the horses in the dressage of each particular city. What is patently cruel is made to look pretty.

I saw a lovely horse by the Spanish Steps and I tried to imagine what his inner life must be. Rome is a city full of music—with his ears muffled, does he hear any of it? Does it soothe him? The horses are blinkered so they can only see what is immediately in front of them, a thing that seems punitive and cruel on its face. People try to assure me it is for the horses’ own good and to keep the public safe in case on of these magnificent animals is spooked. Here is an idea: stop using them to haul fat-ass Americans around. Outlaw the practice and just let them be horses. One can tell that they are tired—here and there you see them shifting their weight from one foot to the other, they’re fatigued. I know visitors love this shit, but it’s time to prohibit it—in every city in the world.

That said, these were about the only unpleasant thoughts I had while exploring Rome and Florence. People I know often chastise me for my style of visiting other countries. I don’t take tours.

I don’t much like the big attractions or “sights.” I like the people—the everyday neighborhoods where people live their lives as Romans or Florentines. I got a ration of shit from some “professional” travelers for not going to the Vatican or the Sistine Chapel. I don’t need to see where the Pope popes—I’m sure he has a nice crib; but I was more interested in seeing where the Christians got fed to the lions, the Coliseum. The Spanish Steps. I was interested in the architecture that makes me feel like I’m walking around inside of a De Chirico painting.

I walked the Porta Portese market with my daughter and wife, and it reminded me of nothing so much as an Italian Maxwell Street with all manner of things for sale that felt slightly… warm shall we say? Bicycles (my daughter has bought her own bike back from here before), bags, scarves, pashminas, cameras, tools, cooking utensils, gloves, belts, videos, CDs, cell-phone covers—you name it, it was there. It was a brisk, no-shit, full-on embrace of capitalism, Roman-style. I found no small amount of stuff for drawing and collages there.

My daughter Gaby goes to school here and she speaks fluent and flawless Italian. Before this, she spent two years at school in Florence. My next life I want to be her. She is studying politics and international law and wants to work on behalf of refugees. If she winds up as a lawyer, she will be a good one. I haven’t won an argument with her since she was three. She showed me the Rome and Florence you don’t read about in books and for the rest of my life I will be grateful for this.

We spent one night with her eating gelato in the Piazza della Madonna dei Monti, watching Italians of all ages sit, drink, smoke hash, argue, flirt—I felt like this is the kind of place I’d like to be old.

I gave coins to the gypsies, bought a selfie stick (which I will never use) from a young man from Senegal, and overheard a lot of what people think of Americans.

Italians go a little easy on us. They had an imbecile in Berlusconi, so they feel for us and sympathize with us now that we have our own imbecile.

What was marvelous was being unplugged from All Trump All the Time. The twenty-four-hour news cycle here is merely background noise. In Italy, there is too much living and life going on to relegate all of one’s attention to politics. People pay close attention to the grace notes of being alive. I bought special papers, maps and many images of birds. I looked for a soccer shirt but couldn’t find a Roma one that fit me. In Rome, all the guys who play soccer are FIT. I walked six to seven miles a day and really got a sense of Rome and Florence.

One of the ways Romans wish each other good luck is the phrase In Bocca al Lupo, which implies the safest place to be is in the mouth of the wolf. While it doesn’t make sense to me, I’ll roll with it. People say this with a smile, so I took it as an odd bit of goodwill.

In Florence we went to the Uffizi and I found myself in a room full of Botticellis, including the painting that made me want to be an artist when I was little. “Pallas and the Centaur” is the one—in it, a woman warrior caresses a lock of the terrified centaur’s hair. It is sensual and at the same time virtuous; and I suspect it is maybe about the burden of mercy. I didn’t expect that seeing it would be as emotional as it was. I had to go out and sit down in the hallway and think about the painting.

There is something about the raw ether of the original that changes one’s gravity as an artist. When a work of art whispers something to you over an arc of centuries, to inform you that on that day, you are where you need to be.