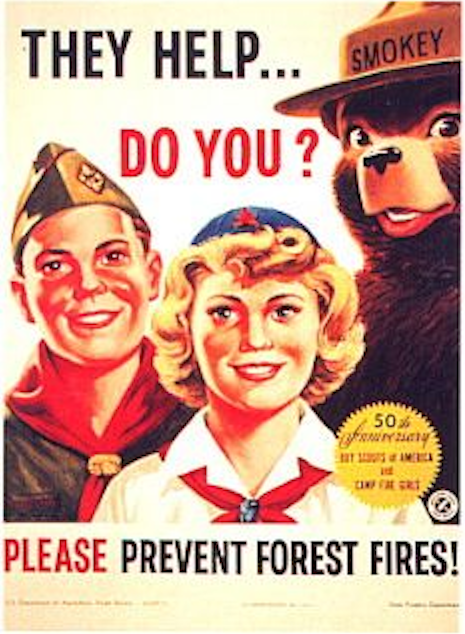 Smokey the Bear with members of the Boy Scouts of America and the Camp Fire Girls celebrating the fiftieth anniversary of their founding in 1910.

ARIES (March 21-April 19): Unless you were raised by a pack of feral raccoons or a fundamentalist cult, now is a perfect time to dive in to your second childhood. Is there a toy you wanted as a kid but never got? Buy it for yourself now! What were the delicious foods you craved back then? Eat them! Where were the special places you loved? Go there, or to spots that remind you of them. Who were the people you were excited to be with? Talk with them. Actions like these will get you geared up for a full-scale immersion in innocent eagerness. And that would be just the right medicine for your soul.

TAURUS (April 20-May 20): What I wish for you, Taurus, is toasted ice cream and secrets in plain sight and a sacred twist of humorous purity. I would love for you to experience a powerful surrender and a calm climax and a sweeping vision of a small but pithy clue. I very much hope that you will get to take a big trip to an intimate turning point that’s not too far away. I pray you will find or create a barrier that draws people together instead of keeping them apart.

GEMINI (May 21-June 20): In Dr. Seuss’s book, “Horton Hatches the Egg,” an elephant assumes the duty of sitting on a bird’s egg, committed to keeping it warm until hatching time. The nest is located high in a tree, which makes the undertaking even more incongruous. By the climax of the tale, Horton has had to persist in his loyal service through a number of challenges. But all ends well, and there’s an added bonus: The creature that’s born is miraculously part-bird, part-elephant. I see similarities between this story and your life right now, Gemini. The duty you’re carrying out doesn’t come naturally, and you’re not even sure you’re doing it right. But if you keep at it till it’s completed, you’ll earn a surprising reward.

CANCER (June 21-July 22): It’s prime time for you to break through any inhibitions you might have about accessing and expressing your passion. To help you in this righteous cause, I’ve assembled a batch of words you should be ready to use with frequency and sweet abandon. Consider writing at least part of this list on your forearm with a felt-tip pen every morning so it’s always close at hand: enamored, piqued, enchanted, stirred, roused, enthused, delighted, animated, elevated, thrilled, captivated, turned-on, enthralled, exuberant, fired up, awakened.

LEO (July 23-Aug. 22): Matt Groening, creator of the cartoon series “The Simpsons,” says that a great turning point in his early years came when his Scoutmaster told him he was the worst Boy Scout in history. While this might have demoralized other teenagers, it energized Groening. “Well, somebody’s got to be the worst,” he triumphantly told the Scoutmaster. And then, “instead of the earth opening up and swallowing me, instead of the flames of hell fire licking at my knees—nothing happened. And I was free.” I suspect you may soon be blessed with a comparable liberation, Leo. Maybe you’ll be released from having to live up to an expectation you shouldn’t even live up to. Or maybe you’ll be criticized in a way that will motivate your drive for excellence for years to come.

VIRGO (Aug. 23-Sept. 22): Nineteen of my readers who work in the advertising industry signed a petition requesting that I stop badmouthing their field. “Without advertising,” they testified, “life itself would be impossible.” In response, I agreed to attend their re-education seminar. There, under their tutelage, I came to acknowledge that everything we do can be construed as a kind of advertising. Each of us is engaged in a mostly unconscious campaign to promote our unique way of looking at and being in the world. Realizing the truth, I now feel no reservations about urging you Virgos to take advantage of the current astrological omens. They suggest that you can and should be aggressive and ingenious about marketing yourself, your ideas, and your products.

LIBRA (Sept. 23-Oct. 22): In 2003, the American Film Institute announced the creation of a new prize to honor acting talent. Dubbed the Charlton Heston Award, it was designed to be handed out periodically to luminaries who have distinguished themselves over the course of long careers. The first recipient of the award was, oddly enough, Charlton Heston himself, born under the sign of Libra. I hope you’re inspired by this story to wipe away any false modesty you might be suffering from. The astrological omens suggest it’s a favorable moment to create a big new award named after you and bestow it upon yourself. As part of the festivities, tell yourself about what makes you special, amazing and valuable.

SAGITTARIUS (Nov. 22-Dec. 21): The best way to go forward is to go backward; the path to the bright future requires a shadowy regression. Put another way, you should return to the roots of a triumph in order to find a hidden flaw that might eventually threaten to undo your success. Correct that flaw now and you’ll make it unnecessary for karmic repercussions to undermine you later. But please don’t get all solemn-faced and anxious about this assignment. Approach it with humorous self-correction and you’ll ensure that all goes well.

CAPRICORN (Dec. 22-Jan. 19): Are you familiar with the psychological concepts of anima and animus? You’re in the midst of being intoxicated by one of those creatures from inner space. Though you may not be fully conscious of it, you women are experiencing a mystical marriage with an imaginal character that personifies all that’s masculine in your psyche. You men are going through the analogous process with a female figure within you. I believe this is true no matter what your sexual orientation is. While this awesome psychological event may be fun, educational, and even ecstatic, it could also be confusing to your relationships with real people. Don’t expect them to act like or live up to the very real fantasy you’re communing with.

AQUARIUS (Jan. 20-Feb. 18): As a recovering save-the-world addict, I have felt compassionate skepticism toward my fellow junkies who are still in the throes of their obsession. But recently I’ve discovered that just as a small minority of alcoholics can safely take a drink now and then, so can a few save-the-world-aholics actually save the world a little bit at a time without getting strung-out. With that as a disclaimer, Aquarius, I’m letting you know that the cosmos has authorized you to pursue your own brand of fanatical idealism in the coming weeks. To keep yourself honest, make fun of your zealotry every now and then.

PISCES (Feb. 19-March 20): The potential breakthrough I foresee for you is a rare species of joy. It’s a gritty, hard-earned pleasure that will spawn beautiful questions you’ll be glad to have awakened. It’s a surprising departure from your usual approach to feeling good that will expand your understanding of what happiness means. Here’s one way to ensure that it will visit you in all of its glory: Situate yourself between the fabulous contradictions in your life and say, “Squeeze me, tease me, please me.”

Homework: What was the pain that healed you most? What was the pleasure that hurt you the worst? Testify at FreeWillAstrology.com.