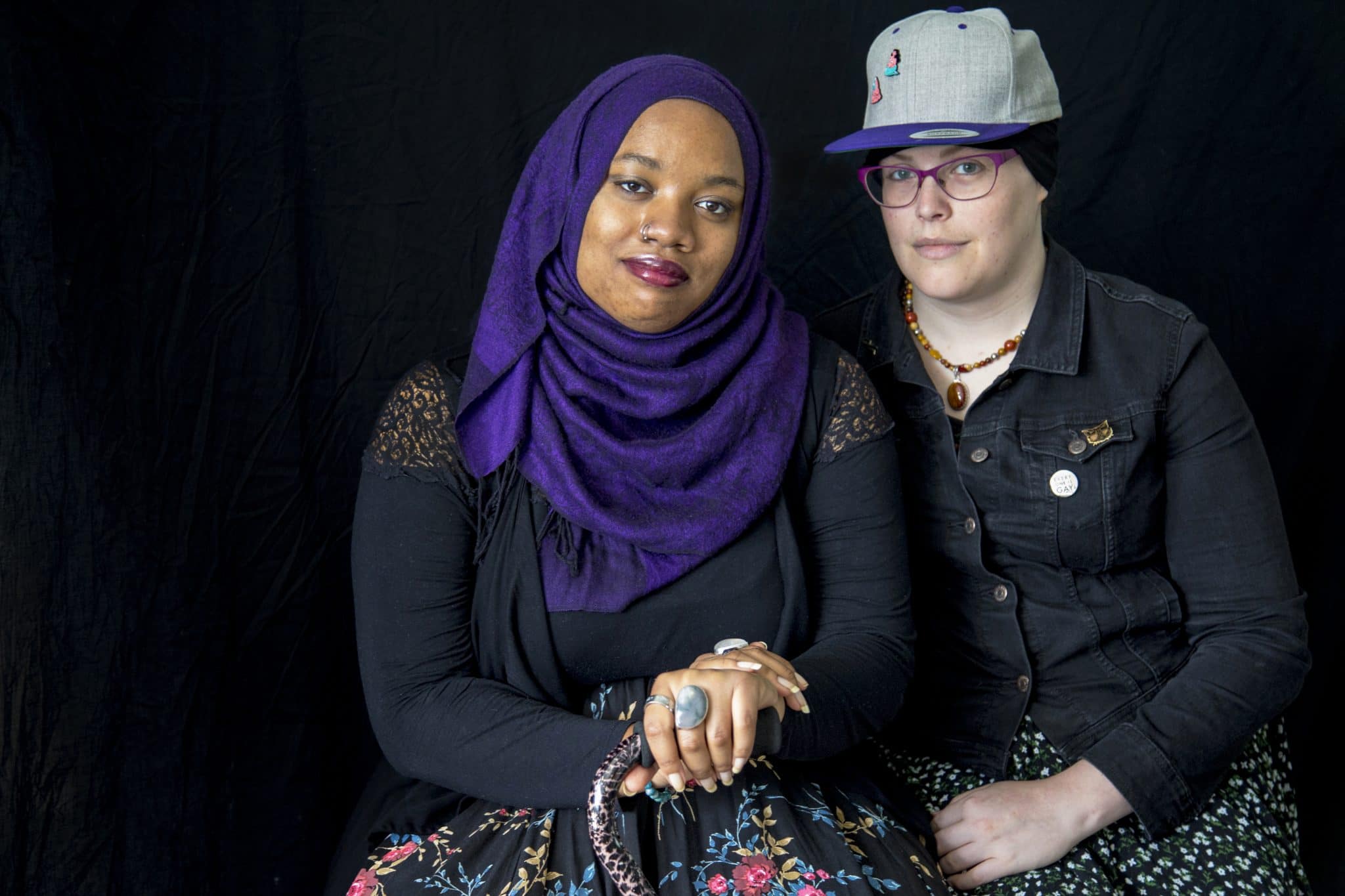 Newcity sat down with Mahdia Lynn and Zaynab Shahar, the organizers of Masjid al-Rabia, a women-centered, LGBTQIA+-affirming Muslim congregation in the Chicago area, for a conversation about their mission and the experiences of marginalized Muslims.

What’s the overall project of Masjid al-Rabia? And what is the significance behind its name?
Mahdia: We are dedicated to providing spiritual care for marginalized Muslims. We operate with five pillars of inclusivity, which are women-centered, anti-racist, LGBTQIA-affirming, pluralist and accessible. We try to create a pluralist Muslim community where each person is supported as an individual spiritual being with agency. We are so often reduced to our politics or our identities, and LGBTQ Muslims especially are reduced to a sexual identity. We are trying to create a space where a person can be a whole human being.

We named the congregation after Rabia Basri, who is considered the first female sufi saint of Islam. She lived in the eighth century, never married. She’s a very dynamic and interesting figure and very fitting for our namesake.

On an everyday basis, what does that look like?
Mahdia: We are a roving organization based primarily in the North Side off the Red Line, which helps us connect with both the north and the south sides of the city. Normally, we have our Friday jum’ah prayer in Lakeview, but for the holy month of Ramadan we moved between Hyde Park, the Center on Halsted, and other neighborhoods to be more accessible citywide. Also, jum’ah congregational prayers are traditionally held at noon, but we found that many who wanted to participate could not make a midday prayer, so we shifted it to the evening.

We also recently launched a pen-pal program for incarcerated LGBTQ Muslims in partnership with the Black and Pink Chicago chapter. We also put together a digital care package for queer and trans Muslims so we can reach those in the English-language world beyond Chicago and let them know that they are not alone. 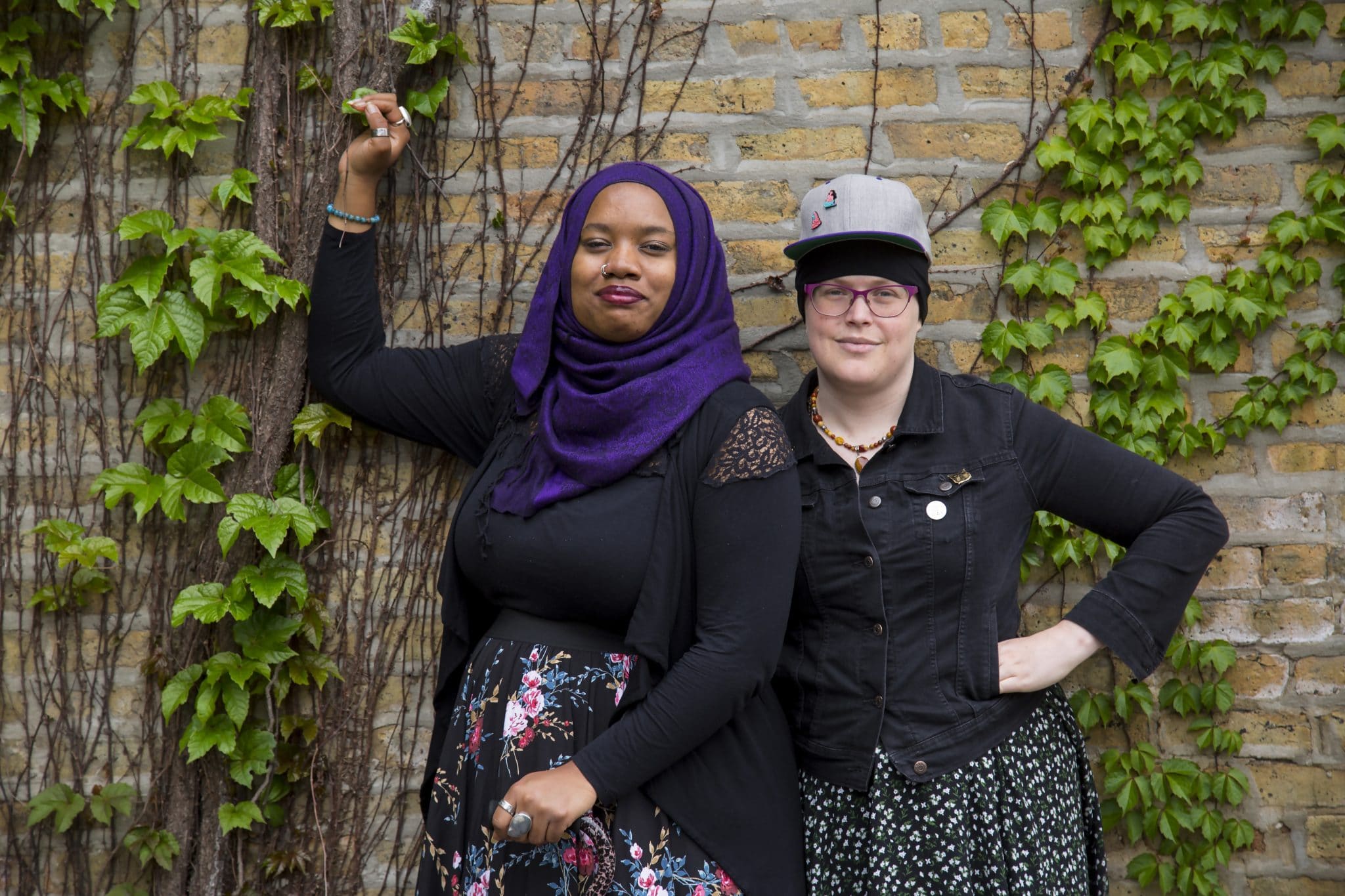 How do you balance inclusivity with ensuring the safety of your community?
Mahdia: We are loud and unapologetic about being present in Chicago. We are very clear that we are in the city, but the physical address is always one step removed. You just have to contact one of us personally or through the website, or know someone who is with us.

At the beginning it was almost all online. In 2014, I was putting together a transgender Muslim support network and Zaynab was organizing Third Coast Queer Muslims. From this digital start we stepped into the physical world and found many very supportive and inspirational interfaith connections here in Chicago, all of them interested in making stronger, more inclusive faith communities. We were welcomed by them, and it was a lot of help in terms of material support, space and spreading the word.

What you are doing is not exactly activism, but it is undoubtedly progressive. How do you view Masjid al-Rabia in terms of a larger progressive social movement that has seen an uptick in popularity since last year?
Mahdia: Advocacy and education are core to our leadership, particularly advocating for women in LGBTQ Muslim spaces and advocating for Muslims in LGBTQ spaces. However, that’s been mostly separate from the spiritual support and community-building side of our work. We want to make sure no one gets kicked out of their mosque, but we also acknowledge that it happens and that we will be there to accept them if it does.

How do you structure congregational worship given that you promote a diverse and inclusive environment among people with differing relationships with Islam? Do you have an imam or a designated spiritual leader in your mosque?
Mahdia: Not at all. Zaynab and I are custodians of the organization and the space, but we are not its spiritual leaders. We entrust spiritual leadership in the community, so instead of a traditional khutbah sermon, we sit in a circle and we have a prompt that includes a section of the Qur’an or the life of the Prophet that starts us talking. We are trying to promote spiritual growth and leadership among our community. We encourage new people to give the adhan call to prayer or to lead prayer each week. In those prayers, we defer to the individual’s practice. For instance, I follow the Shi’a tradition. If I am leading prayer, I pray in a way that differs from the Sunni tradition. If Zaynab leads prayer, we will pray in a Sufi way. These differences in theology can make the pluralist space that holds us together.

From a spiritual perspective, how do you negotiate the plurality of beliefs in your space given the many variations of Muslim theologies at work simultaneously?
Zaynab: We allow people to step up to faith leadership, so however that person chooses to hold prayer is how the congregation will follow. In terms of khutbah, for example, we don’t vet what people are going to say. If something negative ever came up, it would be a point of conversation. One of the things we both bump up against is the assumption that in LGBTQ Muslim spaces everyone just gets along with one another and that people don’t have fundamental doctrinal differences.

Or that those differences are suppressed in light of the larger concern of being marginalized at large?
Zaynab: Exactly, and that defaults to a kind of limiting, normative practice.

How does your organization interact with the larger Muslim community in Chicago and the city in general? The pluralism and the queerness of your organization must come off as eclectic and self-contradictory to some Muslims and non-Muslims alike.
Mahdia: When it comes to advocacy and education, I am an incrementalist. I will spend the time to work with people individually to transform their beliefs. In terms of community building, I am a radical. I believe that this community needs to be served. These are our two strategies. It’s incremental work, but now more than ever, more straight Muslim women are willing to talk about LGBTQ Muslims.

Zaynab: I think it depends on your position. Some of our allies in the academy, for example, are those who have risen the ranks of Islamic studies and have that credibility behind them, but those who are still building their careers are less able to speak up. A lot of my black, feminist Muslim friends are not only trying to navigate their own reconciliation of those issues but also their public positions on them.

Are there particular sets of beliefs that are especially antagonistic to what you advocate?
Mahdia: There are particular styles. Some throw verses of the Qur’an at you and expect you to see the light. They assume absolute ignorance and that they can educate me into not being transexual anymore. And then there are the outright death threats, and the white knights. It’s being a woman on the internet, running the gamut from mild annoyance to feeling extremely unsafe.

Between unraveling those differences within your community and advocating for a broader understanding of the queer and trans Muslim experience, how do you divide your energy?
Zaynab: Both have to happen at the same time, because they are happening regardless if people want to name it or not. You can’t create an inclusive space by ignoring the ways that things are being constructed as normative within Islam. At the end of the day, people are concerned with their relationship with God. As a pluralist mosque, we are very intentional about that so there is no confusion about what you are getting into when you walk in the door.

Mahdia: There is an effort to homogenize the experience to make it easier to sell. But we should be able to celebrate our differences and learn from one another through them rather than uncomfortably shuffling them aside.

How do individuals in your community find their ways through their faith in light of a history of normative doctrines that have not acknowledged their identities?
Mahdia: One of the things I often hear is, “I thought I was the only one.” Often queer Muslims don’t see any possibility between who they are and who they want to be. An important thing for me is sharing that sense of possibility that you can authentically be a Muslim and yourself at the same time and you show up for others in the same way.

Liberals who are suspicious of faith in general imagine it as inflexible doctrines, which is a wholly different objection than conservative dogma about which faith is the correct one to practice. Is changing liberal minds about Islam important to your work?
Mahdia: There is a liberal understanding of Muslims as a class experiencing Islamophobia. They think of Muslims as a marginalized community and that is separate from their understanding of the Islamic faith. But we are not invested in those hearts and minds. We have a dramatically underserved community here in Chicago that we need to support.

Zaynab: Even if we had the resources to direct to that project, the reality is that the Left is invested in narratives about people of faith regardless of how much testimony and scholarship comes out to counter those stereotypes.

I was visiting a high school up north yesterday and one of the students asked me if Muslim women are forced to wear headscarves. I pointed to a girl nearby who was wearing a cross. I asked, “Is she wearing that cross because she is forced to, or is she wearing it because she expresses her very specific interpretation of her faith in this particular way?” In the same way, there are women who read the Qur’an and come to the conclusion that it is a mandate to wear the hijab. I read those same verses and conclude that there is not enough evidence even to support what hijab looks like, and that most of the appearance of it is socially and culturally determined.

But there’s no difference between the assumption that giving me some Simone de Beauvoir or Lena Dunham would make me stop being who I am and the idea that giving me the right hadith would change my identity. Both are proscriptive.

Within your pluralist congregational structure, do you see people rising to the occasion and finding their way in the faith?
Mahdia: A lot of people have really come into their own through our shared leadership approach. Since we’ve begun, I’ve been blessed with the experience of a mother leading prayer with her infant in her arms, a transgender teenager leading prayer as I prayed beside his mother, a bunch of people—women and queer people—who couldn’t have even imagined being in a mosque, let alone leading prayer. It’s a constantly wonderful and intense experience, nothing short of a blessing.