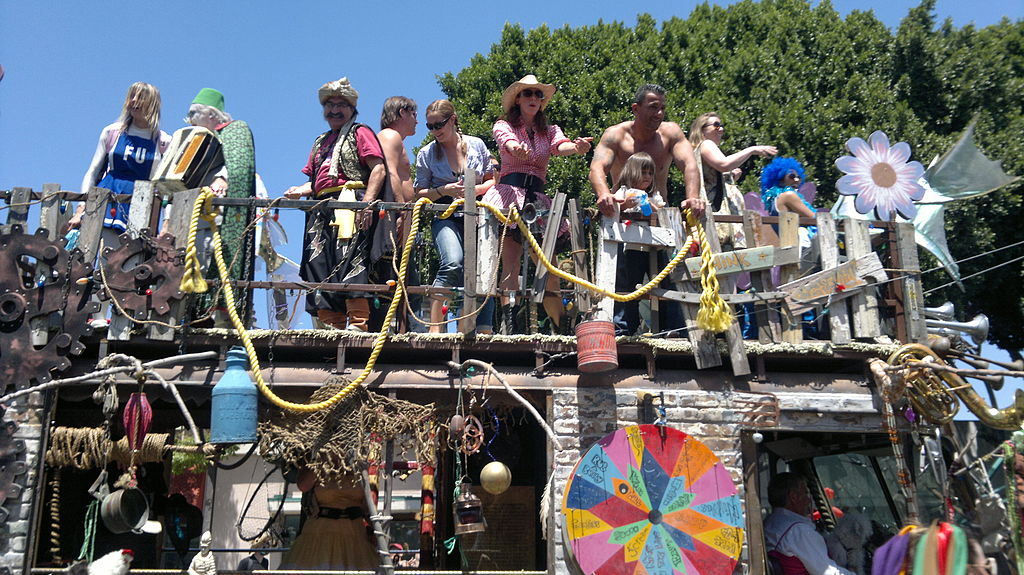 ARIES (March 21-April 19): In my astrological opinion, your life in the coming days should draw inspiration from the ancient Roman festival of Saturnalia, a six-day bout of revelry that encouraged everyone to indulge in pleasure, speak freely and give gifts. Your imminent future could (and I believe should) also have resemblances to the yearly Doo Dah Parade in Pasadena, which features a farcical cavalcade of lunatics, like the Shopping Cart Drill Team, The Radioactive Chicken Heads, the Army of Toy Soldiers and the Men of Leisure Synchronized Nap Team. In other words, Aries, it’s an excellent time to set aside your dignity and put an emphasis on having uninhibited fun; to amuse yourself to the max as you experiment on the frontiers of self-expression; to be the person you would be if you had nothing to lose.

TAURUS (April 20-May 20): It’s time to Reinvent the Wheel and Rediscover Fire, Taurus. In my astrological opinion, you’ll be wasting your time unless you return to the root of all your Big Questions. Every important task will mandate you to consult your heart’s primal intelligence. So don’t mess around with trivial pleasures or transitory frustrations that won’t mean anything to you a year from now. Be a mature wild child in service to the core of your creative powers.

GEMINI (May 21-June 20): Writing in The Futurist magazine, Christopher Wolf says that the tradition of eating three hearty meals per day is fading and will eventually disappear. “Grazing” will be the operative term for how we get our fill, similar to the method used by cavemen and cavewomen. The first snack after we awaken, Wolf suggests, might be called “daystart.” The ensuing four could be dubbed “pulsebreak,” “humpmunch,” “holdmeal” and “evesnack.” In light of your current astrological omens, Gemini, I endorse a comparable approach to everything you do: not a few big doses, but rather frequent smaller doses; not intense cramming but casual browsing; not sprawling heroic epics but a series of amusing short stories.

CANCER (June 21-July 22): The RIKEN Institute in Japan experiments with using ion beams to enhance plant growth. In one notable case, they created a new breed of cherry tree that blossoms four times a year and produces triple the amount of flowers. The blooms last longer, too, and the trees thrive under a wider span of temperatures. In the next eleven months, Cancerian, you won’t need to be flooded with ion beams to experience a similar phenomenon. I expect that your power to bloom and flourish will be far stronger than usual.

LEO (July 23-Aug. 22): Leo actor Robert De Niro once observed that most people devote more energy to concealing their emotions and longings than to revealing them. Is that true about you? If so, the coming weeks will be a favorable time to hide less of yourself and express more. There’ll be relatively little hell to pay as a result, and you’ll get a boost of vitality. Don’t go overboard, though. I’m not suggesting that you unveil every last one of your feelings and yearnings to everyone—just to those you trust. Most importantly, I hope you will unveil all your feelings and yearnings to yourself.

VIRGO (Aug. 23-Sept. 22): It has almost become a tradition: Each year at about this time, you seem to enjoy scaring the hell out of yourself, and often the heaven, too. These self-inflicted shocks have often had a beneficial side effect. They have served as rousing prompts for you to reimagine the future. They have motivated and mobilized you. So yes, there has been an apparent method in your madness—an upside to the uproar. What should we expect this time, my dear? A field trip to a crack house or a meth lab? Some fun and games in a pit of snakes? An excursion to the land of bad memories? I suggest something less melodramatic. How about, for example, a frolic with unruly allies in a future paradise that’s still a bit unorganized?

LIBRA (Sept. 23-Oct. 22): Before grapes become wine, they have to be cleaned. Then crushed. Then macerated and pressed. The next phase is fermentation, followed by filtering. The aging process, which brings the grapes’ transformation to completion, requires more time then the other steps. At the end, there’s one more stage: putting the wine in bottles. I’d like to compare the grapes’ evolution to the story of your life since your last birthday. You are nearing the end of the aging phase. When that’s finished, I hope you put great care into the bottling. It’s as important as the other steps.

SCORPIO (Oct. 23-Nov. 21): Are you gearing up to promote yourself and your services? In my astrological opinion, you should be. If so, you could put the following testimonial from me in your résumé or advertisement: “[place your name here] is a poised overseer of nerve-wracking transitions and a canny scout who is skilled at tracking down scarce resources. He/she can help you acquire the information and enhancements you don’t quite have the power to get by yourself. When conditions are murky or perplexing, this plucky soul is enterprising and inventive.”

SAGITTARIUS (Nov. 22-Dec. 21): Your eyes are more powerful than you realize. If you were standing on a mountaintop under a cloudless night sky with no moon, you could see a fire burning fifty miles away. Your imagination is also capable of feats that might surprise you. It can, for example, provide you with an expansive and objective view of your entire life history. I advise you to seek that boost now. Ask your imagination to give you a prolonged look at the big picture of where you have been and where you are going. I think it’s essential to your discovery of the key to the next chapter of your life story.

CAPRICORN (Dec. 22-Jan. 19): Love is your gritty but sacred duty. It’s your prickly prod and your expansive riddle, your curious joy and your demanding teacher. I’m talking about the whole gamut, Capricorn— from messy personal romantic love to lucid unconditional spiritual love; from asking smartly for what you desire to gratefully giving more than you thought you had. Can you handle this much sweet, dark mystery? Can you grow your intimacy skills fast enough to keep up with the interesting challenges? I think you can.

AQUARIUS (Jan. 20-Feb. 18): There’s an eclipse of the moon coming up in the sign of Aquarius. Will it bring bad luck or good luck? Ha! That’s a trick question. I threw it in to see if you have been learning anything from my efforts to redeem astrology’s reputation. Although some misinformed people regard my chosen field as a superstitious pseudo-science, I say it’s an imaginative art form that helps us identify and transform our subconscious patterns. So the wise answer to my earlier question is that the imminent lunar eclipse is neither bad luck nor good luck. Rather, it tells you that you have more power than usual to: 1. tame and manage the disruptive and destructive aspects of your instinctual nature; 2. make progress in dissolving your old conditioning; 3. become more skilled at mothering yourself.

PISCES (Feb. 19-March 20): August is Good Hard Labor Month for you Pisceans. It’s one of those rare times when a smart version of workaholic behavior might actually make sense. Why? First of all, it could ultimately lead to a pay raise or new perks. Secondly, it may bring to light certain truths about your job that you’ve been unconscious of. Third, it could awaken you to the fact that you haven’t been trying as hard as you could to fulfill one of your long-term dreams; it might expand your capacity to devote yourself passionately to the epic tasks that matter most. For your homework, please meditate on this thought: Summoning your peak effort in the little things will mobilize your peak effort for the Big Thing.

Homework: What do you know or do that very few people know or do? Tell me at FreeWillAstrology.com. Click on “Email Rob.”