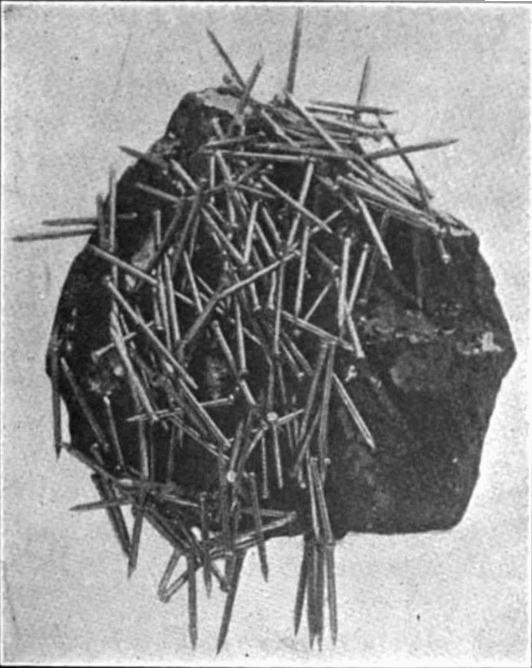 A lodestone, a piece of the mineral magnetite that is a natural magnet.

ARIES (March 21-April 19): I hate rampant consumerism almost as much as I hate hatred, so I don’t offer the following advice lightly: Buy an experience that could help liberate you from the suffering you’ve had trouble outgrowing. Or buy a toy that can thaw the frozen joy that’s trapped within your out-of-date sadness. Or buy a connection that might inspire you to express a desire you need help in expressing. Or buy an influence that will motivate you to shed a belief or theory that has been cramping your lust for life. Or all of the above! (And if buying these things isn’t possible, consider renting.)

TAURUS (April 20-May 20): These days you have an enhanced ability to arouse the appreciation and generosity of your allies, friends and loved ones. The magnetic influence you’re emanating could even start to evoke the interest and inquiries of mere acquaintances and random strangers. Be discerning about how you wield that potent stuff! On the other hand, don’t be shy about using it to attract all the benefits it can bring you. It’s OK to be a bit greedier for goodies than usual as long as you’re also a bit more compassionate than usual.

GEMINI (May 21-June 20): I bet that a healing influence will arrive from an unexpected direction and begin to work its subtle but intense magic before anyone realizes what’s happening. I predict that the bridge you’re building will lead to a place that’s less flashy but more useful than you imagined. And I’m guessing that although you may initially feel jumbled by unforeseen outcomes, those outcomes will ultimately be redemptive. Hooray for lucky flukes and weird switcheroos!

CANCER (June 21-July 22): Born under the astrological sign of Cancer, Franz Kafka is regarded as one of the twentieth century’s major literary talents. Alas, he made little money from his writing. Among the day jobs he did to earn a living were stints as a bureaucrat at insurance companies. His superiors there praised his efforts. “Superb administrative talent,” they said about him. Let’s use this as a take-off point to meditate on your destiny, Cancerian. Are you good at skills you’re not passionate about? Are you admired and acknowledged for having qualities that aren’t of central importance to you? If so, the coming weeks and months will be a favorable time to explore this apparent discrepancy. I believe you will have the power to get closer to doing more of what you love to do.

LEO (July 23-Aug. 22): If you really wanted to, you could probably break the world’s record for most words typed per minute with the nose (103 characters in forty-seven seconds). I bet you could also shatter a host of other marks, as well, like eating the most hot chiles in two minutes, or weaving the biggest garland using defunct iPhones, or dancing the longest on a tabletop while listening to a continuous loop of Nirvana’s song “Smells Like Teen Spirit.” But I hope you won’t waste your soaring capacity for excellence on meaningless stunts like those. I’d rather see you break your own personal records for accomplishments like effective communications, high-quality community-building and smart career moves.

VIRGO (Aug. 23-Sept. 22): Isaac Newton (1643-1727) was among history’s three most influential scientists. Immanuel Kant (1724-1804) has been described as the central figure in modern philosophy. Henry James (1843-1916) is regarded as one of the greatest novelists in English literature. John Ruskin (1819-1900) was a prominent art critic and social thinker. What did these four men have in common? They never had sex with anyone. They were virgins when they died. I view this fact with alarm. What does it mean that Western culture is so influenced by the ideas of men who lacked this fundamental initiation? With that as our context, I make this assertion: If you hope to make good decisions in the coming weeks, you must draw on the wisdom you have gained from being sexually entwined with other humans.

LIBRA (Sept. 23-Oct. 22): “Every so often, a painter has to destroy painting,” said twentieth-century abstract-expressionist painter Willem de Kooning. “Cézanne did it. Picasso did it with cubism. Then Pollock did it. He busted our idea of a picture all to hell.” In de Kooning’s view, these “destructive” artists performed a noble service. They demolished entrenched ideas about the nature of painting, thus liberating their colleagues and descendants from stale constraints. Judging from the current astrological omens, Libra, I surmise the near future will be a good time for you to wreak creative destruction in your own field or sphere. What progress and breakthroughs might be possible when you dismantle comfortable limitations?

SCORPIO (Oct. 23-Nov. 21): Mayflies are aquatic insects with short life spans. Many species live less than twenty-four hours, even though the eggs they lay may take three years to hatch. I suspect this may be somewhat of an apt metaphor for your future, Scorpio. A transitory or short-duration experience could leave a legacy that will ripen for a long time before it hatches. But that’s where the metaphor breaks down. When your legacy has fully ripened—when it becomes available as a living presence—I bet it will last a long time.

SAGITTARIUS (Nov. 22-Dec. 21): When a critic at Rolling Stone magazine reviewed the Beatles’ “Abbey Road” in 1969, he said some of the songs were “so heavily overproduced that they are hard to listen to.” He added, “Surely they must have enough talent and intelligence to do better than this.” Years later, however, Rolling Stone altered its opinion, naming “Abbey Road” the fourteenth best album of all time. I suspect, Sagittarius, that you’re in a phase with metaphorical resemblances to the earlier assessment. But I’m reasonably sure that this will ultimately evolve into being more like the later valuation—and it won’t take years.

CAPRICORN (Dec. 22-Jan. 19): According to my analysis of the astrological omens, love should be in full bloom. You should be awash in worthy influences that animate your beautiful passion. So how about it? Are you swooning and twirling and uncoiling? Are you overflowing with a lush longing to celebrate the miracle of being alive? If your answer is yes, congratulations. May your natural intoxication levels continue to rise. But if my description doesn’t match your current experience, you may be out of sync with cosmic rhythms. And if that’s the case, please take emergency measures. Escape to a sanctuary where you can shed your worries and inhibitions and maybe even your clothes. Get drunk on undulating music as you dance yourself into a dreamy love revelry.

AQUARIUS (Jan. 20-Feb. 18): “Life never gives you anything that’s all bad or all good.” So proclaimed the smartest Aquarian six-year-old girl I know as we kicked a big orange ball around a playground. I agreed with her! “Twenty years from now,” I told her, “I’m going to remind you that you told me this heartful truth.” I didn’t tell her the corollary that I’d add to her axiom, but I’ll share it with you: If anything or anyone seems to be all bad or all good, you’re probably not seeing the big picture. There are exceptions, however! For example, I bet you will soon experience or are already experiencing a graceful stroke of fate that’s very close to being all good.

PISCES (Feb. 19-March 20): “Enodation” is an old, nearly obsolete English word that refers to the act of untying a knot or solving a knotty problem. “Enodous” means “free of knots.” Let’s make these your celebratory words of power for the month of May, Pisces. Speak them out loud every now and then. Invoke them as holy chants and potent prayers leading you to discover the precise magic that will untangle the kinks and snarls you most need to untangle.

Homework: What’s the most important question you need an answer for in the next five years? Deliver your best guess to me. Freewillastrology.com.