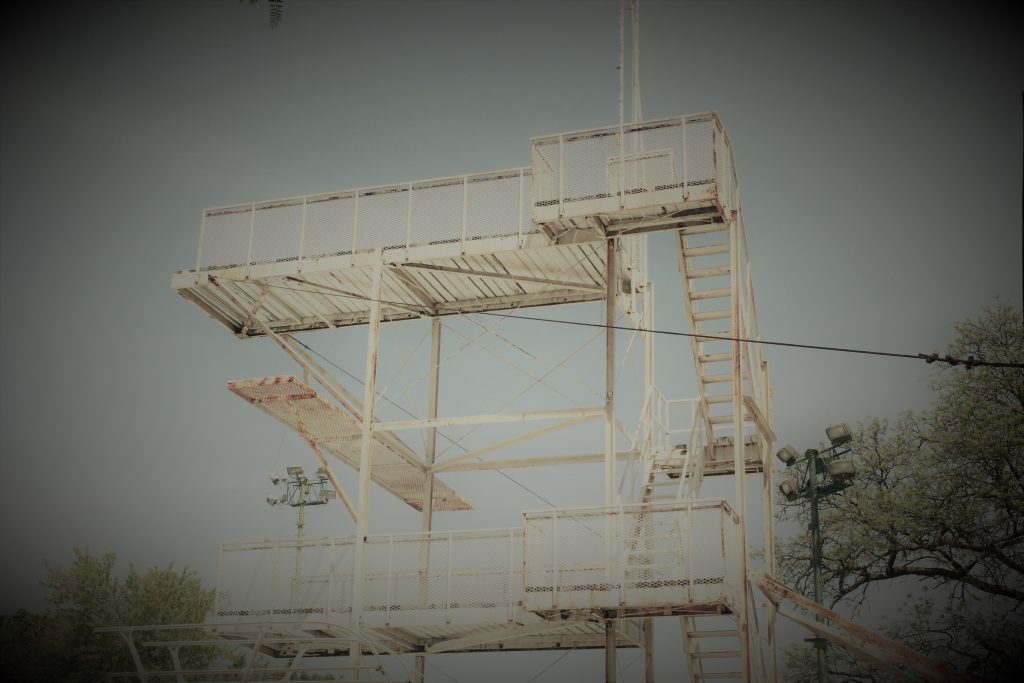 Nine-year-old me, skinny and shivering, stood at the top of Portage Park’s ten-meter diving platform looking down at the deep blue dive pool below. It was after dark and the underwater lights made the pool glow several shades of blue. My father was standing behind me, ready to go next. I forget whose idea it was to take this plunge.

Portage Park, though less well-known than Grant, Lincoln and other Chicago public parks, is a beautiful example of enduring WPA artistry, with portals and walkways of pale flagstones. Time and changing tastes led to the dismantlement of some of these jagged and fanciful stone works—those that remain poke up here and there, like fossils of dinosaurs who fell into this mucky land where Native Americans once portaged their canoes from the Chicago to the Des Plaines River.

Elsewhere in the park is a large playground but gone are the wooden swings that have bonked the heads of thousands of kids and the tall metal slides without safety rails that were so easy to fall from, as I did once. We now live in a safer, if maybe overly cautious, world.

The gorgeous pool on the eastern edge of the park, constructed in 1959 to host the Pan American Games, featured the ten-meter diving platform to accommodate fancy dives. During that warm night, as I was standing on the diving platform, the lifeguard told me I should step off into space with my arms straight over my head. Then, as I descended, I was to slowly bring my arms straight down to my sides to balance myself as I plummeted through space. We’d all heard rumors about kids belly-flopping, tearing their stomachs open, guts everywhere. These were urban myths, but there’s no doubt that hitting the water flat on your stomach, after falling over thirty feet, would hurt a lot.

Stepping off, I kept my eyes open all the way down. It was a fast, exciting ride, lasting just seconds. I glanced down just once to see the water rushing up to swallow me, the underwater lights illuminating the depths into which I was descending. Never felt anything like it. After I hit water and swam to the side, I watched my dad step off, letting out a “Wahoo!” as he went down. Wish I’d thought of that.

Headed home and walking out the creaky men’s locker room turnstile, we passed a hot dog vendor, steam pouring out windows of his scuffed white van, serving up après-swim snacks for twenty-five cents. Those red hots always smelled so good, but I don’t think we ever stopped for one. My dad surprised me when he asked if I was hungry. As we ate our hot dogs under the street lamps and trees, the air smelling vaguely of chlorine, I felt we’d accomplished something with that jump, even if gravity was doing most of the work. Our handheld victory feast was deliciously simple, a Depression dog: just the sausage in a steamed bun with onions, relish and mustard.

Arriving home, my dad told my mom about our adventure. She was not happy. A lifetime recreational worrier, my mom gave my dad hell for “risking both your lives.” I went to sleep listening to my parents argue about the wisdom of a kid, not yet ten, jumping thirty feet or so into a very deep pool. I was glad I did that jump, but I did it only once and I’m sure I’ll never do it again.The ten-meter board at Portage Park pool is now closed to the public. A nice man in the park office told me they had to close the thirty-meter diving platform because there were “lots of stories about people injuring themselves.”