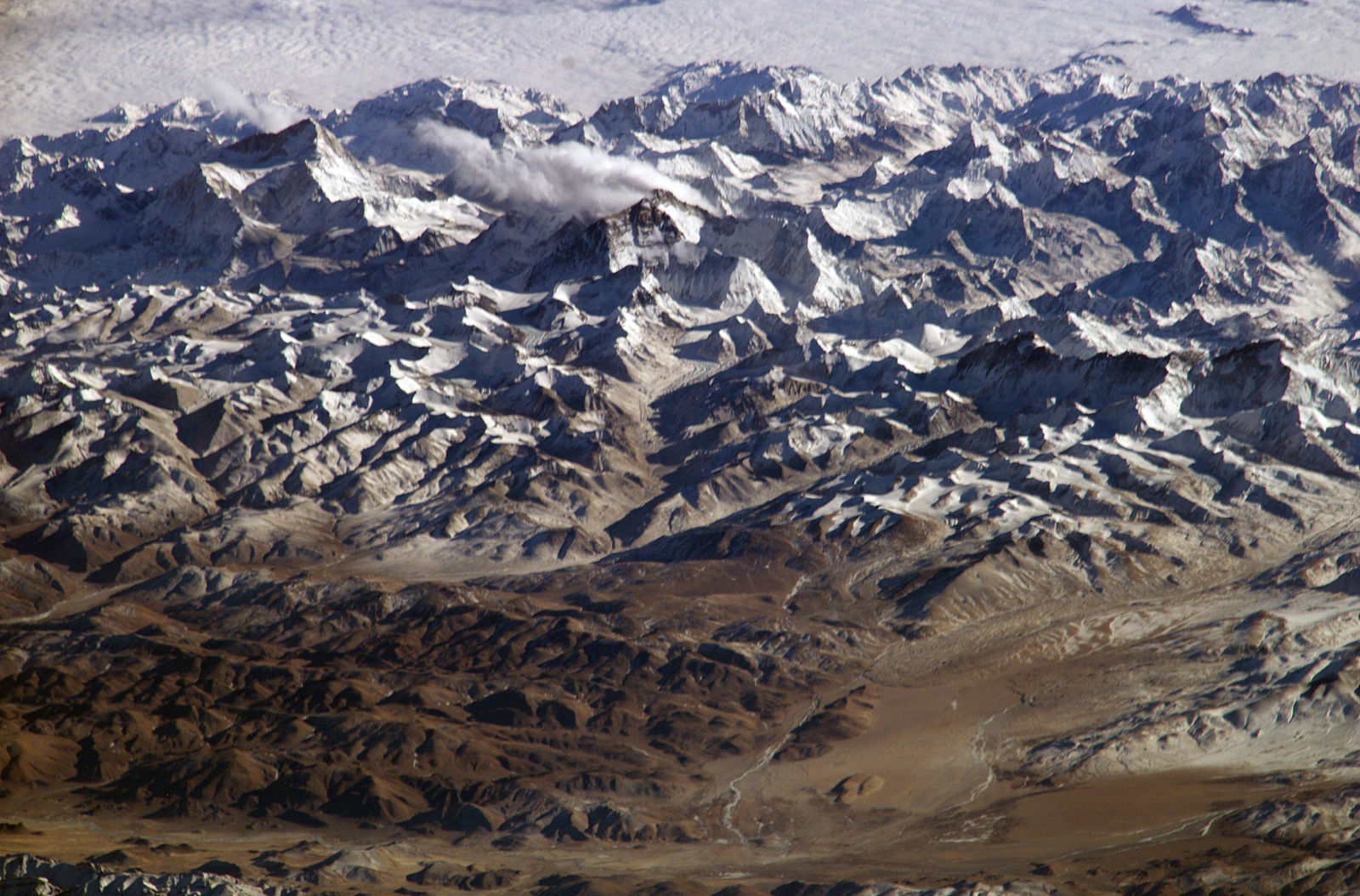 The Himalayas, the highest mountain range on Earth, seen from space.

ARIES (March 21-April 19): Twentieth-century French novelist Marcel Proust described nineteenth-century novelist Gustave Flaubert as a trottoir roulant, or “rolling sidewalk”: plodding, toneless, droning. Meanwhile, critic Roger Shattuck compared Proust’s writing to an “electric generator” from which flows a “powerful current always ready to shock not only our morality but our very sense of humanity.” In the coming weeks, I encourage you to find a middle ground between Flaubert and Proust. See if you can be moderately exciting, gently provocative and amiably enchanting. My analysis of the cosmic rhythms suggests that such an approach is likely to produce the best long-term results.

TAURUS (April 20-May 20): You remind me of Jack, the nine-year-old Taurus kid next door, who took up skateboarding on the huge trampoline his two moms put in their backyard. Like him, you seem eager to travel in two different modes at the same time. (And I’m glad to see you’re being safe; you’re not doing the equivalent of, say, having sex in a car or breakdancing on an escalator.) When Jack first began, he had difficulty in coordinating the bouncing with the rolling. But after a while he got good at it. I expect that you, too, will master your complex task.

GEMINI (May 21-June 20): From the day you were born, you have been cultivating a knack for mixing and blending. Along the way, you have accomplished mergers that would have been impossible for a lot of other people. Some of your experiments in amalgamation are legendary. If my astrological assessments are accurate, the year 2019 will bring forth some of your all-time most marvelous combinations and unifications. I expect you are even now setting the stage for those future fusions; you are building the foundations that will make them natural and inevitable. What can you do in the coming weeks to further that preparation?

CANCER (June 21-July 22): An open letter to Cancerians from Rob Brezsny’s mother, Felice: I want you to know that I played a big role in helping my Cancerian son become the empathetic, creative, thoughtful, crazy character he is today. I nurtured his idiosyncrasies. I made him feel secure and well-loved. My care freed him to develop his unusual ideas and life. So as you read Rob’s horoscopes, remember that there’s part of me inside him. And that part of me is nurturing you just as I once nurtured him. I and he are giving you love for the quirky, distinctive person you actually are, not some fantasy version of you. I and he are helping you feel more secure and well-appreciated. Now I encourage you to cash in on all that support. As Rob has told me, it’s time for you Cancerians to reach new heights in your drive to express your unique self.

LEO (July 23-Aug. 22): The ghost orchid is a rare white wildflower that disappeared from the British countryside around 1986. The nation’s botanists declared it officially extinct in 2005. But four years later, a tenacious amateur located a specimen growing in the West Midlands area. The species wasn’t gone forever, after all. I foresee a comparable revival for you in the coming weeks, Leo. An interesting influence or sweet thing that you imagined to be permanently defunct may return to your life. Be alert!

VIRGO (Aug. 23-Sept. 22): The ancient Greek poet Sappho described “a sweet-apple turning red high on the tip of the topmost branch.” The apple pickers left it there, she suggested, but not because they missed seeing it. It was just too high. “They couldn’t reach it,” wrote Sappho. Let’s use this scenario as a handy metaphor for your current situation, Virgo. I am assigning you the task of doing whatever is necessary to fetch that glorious, seemingly unobtainable sweet-apple. It may not be easy. You’ll probably need to summon extra ingenuity to reach it, as well as some as-yet unguessed form of help. (The Sappho translation is by Julia Dubnoff.)

LIBRA (Sept. 23-Oct. 22): Is there any prize more precious than knowing your calling? Can any other satisfaction compare with the joy of understanding why you’re here on earth? In my view, it’s the supreme blessing: to have discovered the tasks that can ceaselessly educate and impassion you; to do the work or play that enables you to offer your best gifts; to be intimately engaged with an activity that consistently asks you to overcome your limitations and grow into a more complete version of yourself. For some people, their calling is a job: marine biologist, kindergarten teacher, advocate for the homeless. For others, it’s a hobby, like long-distance-running, bird-watching or mountain-climbing. St. Therese of Lisieux said, “My calling is love!” Poet Marina Tsvetaeva said her calling was “To listen to my soul.” Do you know yours, Libra? Now is an excellent time to either discover yours or hone in further on its precise nature.

SCORPIO (Oct. 23-Nov. 21): Have you entertained any high-quality fantasies about faraway treasures lately? Have you delivered inquiring communiqués to any promising beauties who may ultimately offer you treats? Have you made long-distance inquiries about speculative possibilities that could be inclined to travel in your direction from their frontier sanctuaries? Would you consider making some subtle change in yourself so that you’re no longer forcing the call of the wild to wait and wait and wait?

SAGITTARIUS (Nov. 22-Dec. 21): If a down-to-earth spiritual teacher advised you to go on a five-day meditation retreat in a sacred sanctuary, would you instead spend five days carousing with meth addicts in a cheap hotel? If a close friend confessed a secret she had concealed from everyone for years, would you unleash a nervous laugh and change the subject? If you read a horoscope that told you now is a favorable time to cultivate massive amounts of reverence, devotion, respect, gratitude, innocence and awe, would you quickly blank it out of your mind and check your Instagram and Twitter accounts on your phone?

CAPRICORN (Dec. 22-Jan. 19): A typical working couple devotes an average of four minutes per day to focused conversation with each other. And it’s common for a child and parent to engage in meaningful communication for just twenty minutes per week. I bring these sad facts to your attention, Capricorn, because I want to make sure you don’t embody them in the coming weeks. If you hope to attract the best of life’s blessings, you will need to give extra time and energy to the fine art of communing with those you care about.

AQUARIUS (Jan. 20-Feb. 18): Allergies, irritants, stings, hypersensitivities: sometimes you can make these annoyances work in your behalf. For example, my allergy to freshly cut grass meant that when I was a teenager, I never had to waste my Saturday afternoons mowing the lawn in front of my family’s suburban home. And the weird itching that plagued me whenever I got into the vicinity of my first sister’s fiancé: If I had paid attention to it, I wouldn’t have lent him the $350 that he never repaid. So my advice, my itchy friend, is to be thankful for the twitch and the prickle and the pinch. In the coming days, they may offer you tips and clues that could prove valuable.

PISCES (Feb. 19-March 20): Are you somehow growing younger? Your stride seems bouncier and your voice sounds more buoyant. Your thoughts seem fresher and your eyes brighter. I won’t be surprised if you buy yourself new toys or jump in mud puddles. What’s going on? Here’s my guess: you’re no longer willing to sleepwalk your way through the most boring things about being an adult. You may also be ready to wean yourself from certain responsibilities unless you can render them pleasurable at least some of the time. I hope so. It’s time to bring more fun and games into your life.

Homework: Is there an area of your life where your effects are different from your intentions? Testify at Freewillastrology.com.