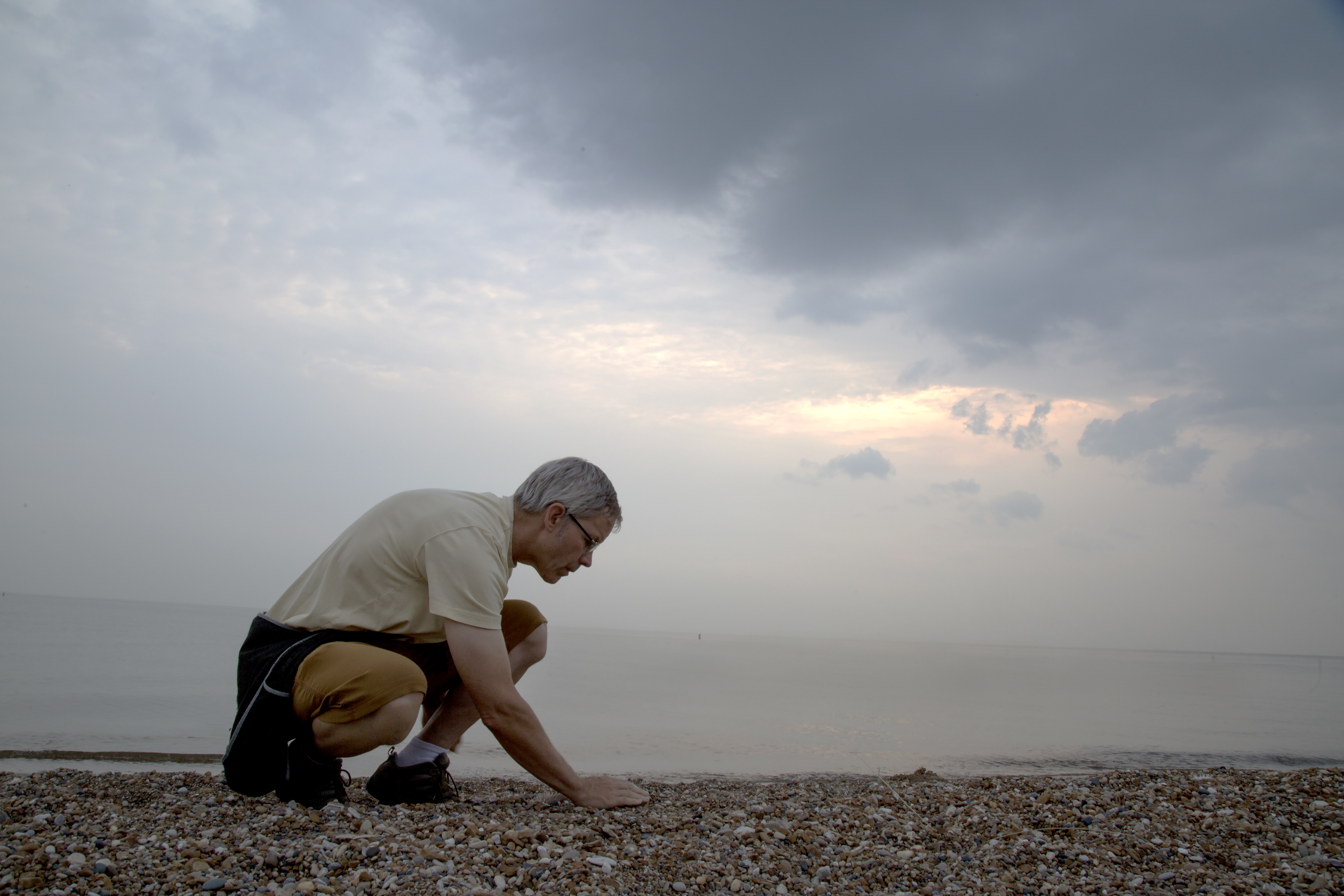 Do seagulls really “wheel”? They glide. They swoop. They hover—even careen. But they don’t exactly wheel. At least not this morning. And the waves don’t “lap,” either. Maybe because the lake is so still today, they just jostle, making a little chuckling sound, nudging tiny stones and bits of glass, a plastic bottle cap, a kid’s barrette, like a dog nosing at an injured bird. Up and out of the water the objects come, onto the dry sand, settling there a moment before the waves are back to reclaim the bottle cap and leave a piece of driftwood.

John Soss reaches down to pick the driftwood up, smoothing at its curve and shape, then puts it in his satchel. He plucks a bit of white glass from the just-purged flotsam, swipes at it, holds it to the light, and bends down again. This time for a tiny bit of red glass. “Red is rare,” he says, rolling the fragment in his palm for me to see, pinching it between thumb and forefinger and holding it sunward. “I can go for a month and not find a single piece of red glass.” 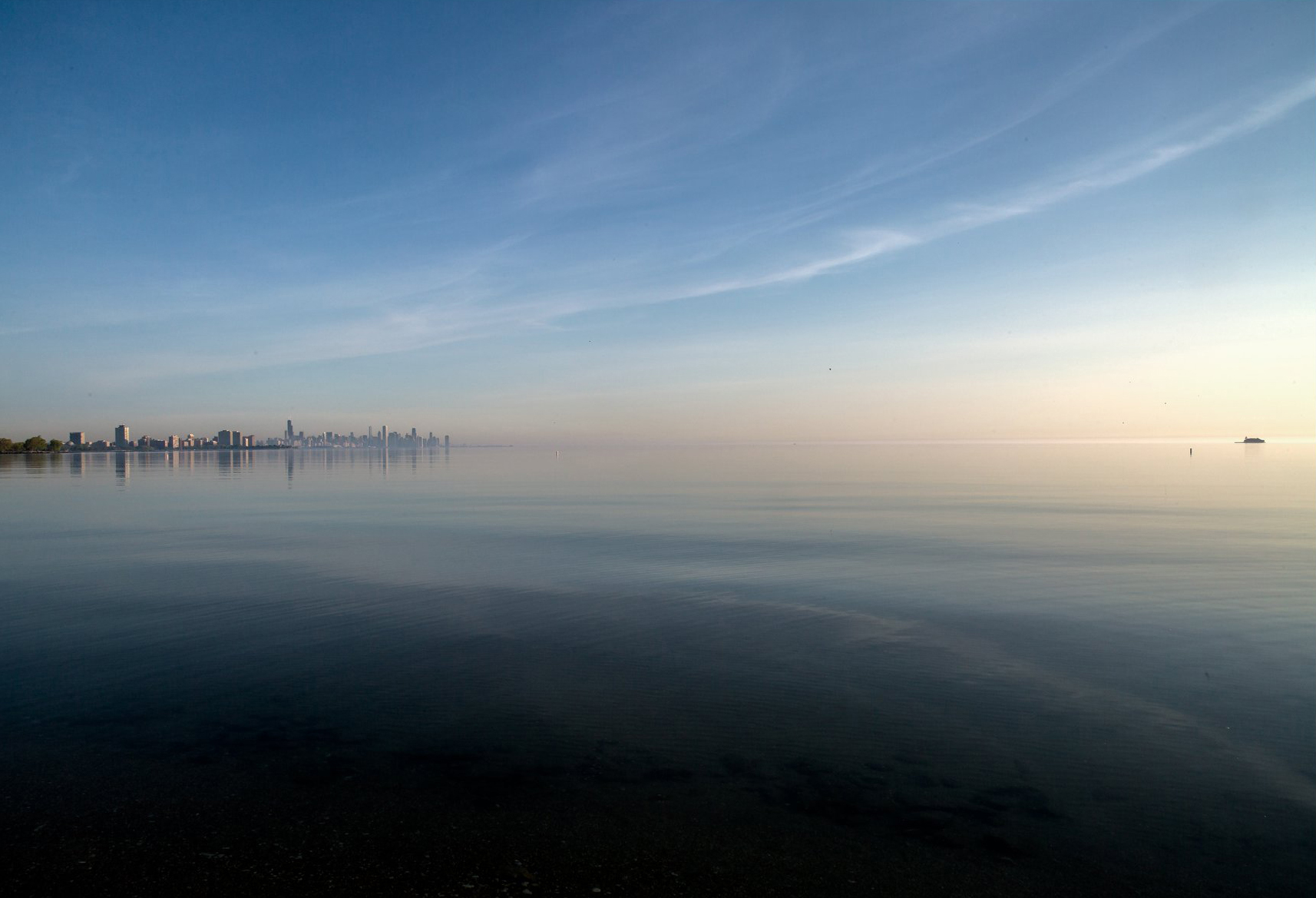 It’s 6:30am. We are walking the water’s edge on a Chicago beach, a favorite of John’s for finding good glass, driftwood and stones.

Soss moves quickly, with a magpie-like dart to his swift selections, tossing most of what he finds back in the water, putting the bigger keepers in the satchel and the little ones in his pocket.

For six years now, Soss has made beachcombing a nearly-every-day ritual. Not just this beach, but about ten favorites that stretch up and down Lake Shore Drive. One, he tells me, is good for finding antique toys, another for shotgun cartridges and clay pigeons left over from the shooting range that used to be there. Still others yield water-worn bricks, terracotta chunks, pottery shards and odd alloys from an old steel mill, construction dumps and who knows what else?

Whatever Soss decides to keep each day gets laid out on one of two sheets of paper at his North Side flat—a little piece for the light hauls, big for bigger ones. Soss photographs the composition with his cell phone and posts the results on Instagram. Then, he either tosses the found bits in the trash, or sorts them into one or another of the dozens of jars, vases, boxes and bowls neatly organized in his living space. There are pull tabs and corks, lighters and sunglasses, fruit pits and stones, bricks and baby dolls, rubber balls and pottery shards, playing dice, army men, twisted metal, and glass and glass and glass. 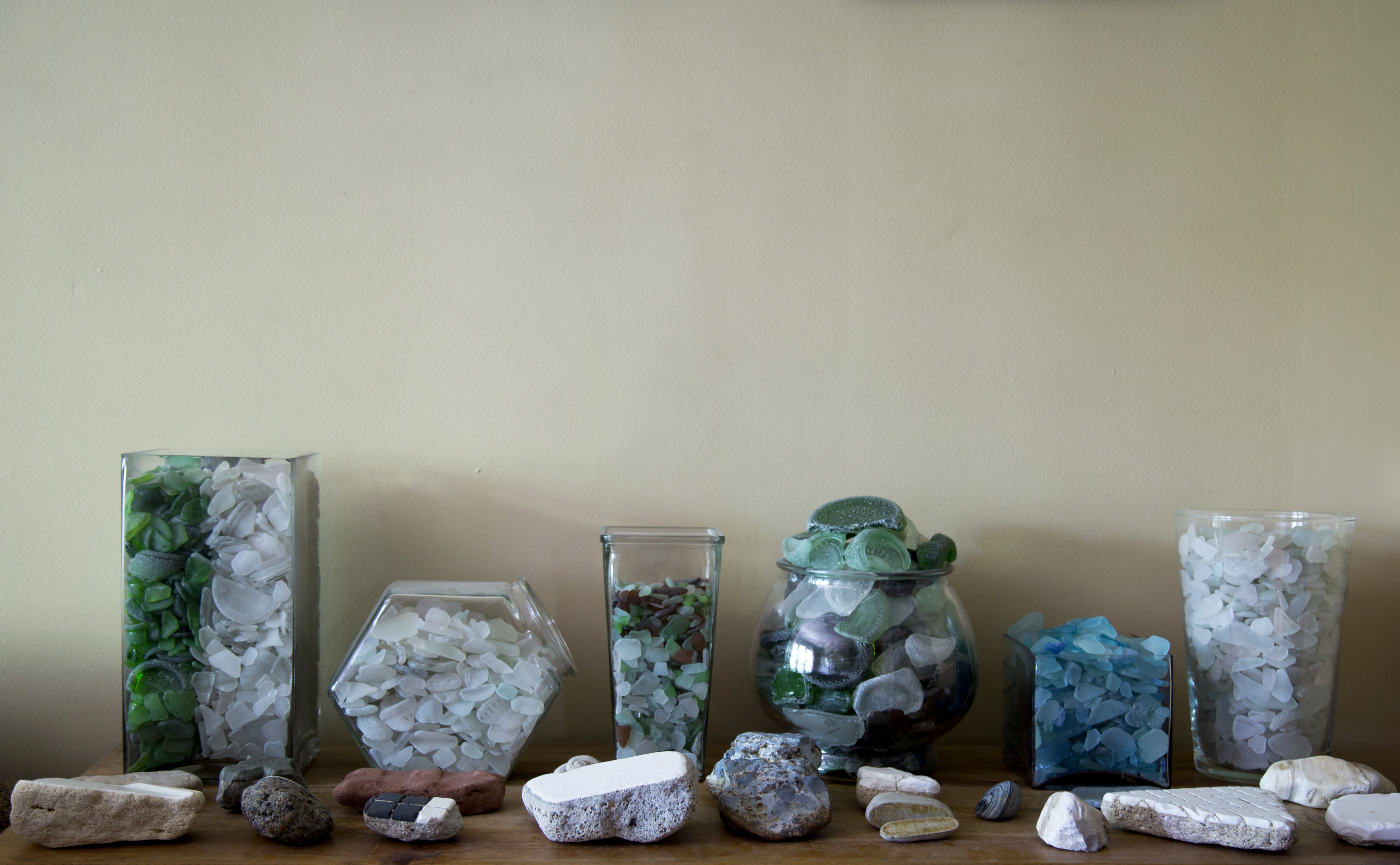 Soss blames his sister. Maybe not blames but credits, because she’s the one who first told him about collecting beach glass in the eighties. “We were in Michigan, taking a walk along a beach and she saw a bit of glass, picked it up and showed me. She explained that this stuff somehow gets dumped in the lake, the bottles break into pieces and the waves roll them around on the sand until eventually they come out like this,” he holds up a soft-edged piece.

“We took a long walk that morning, my sister and I. Found a bunch of stuff. And that was the first time I knew about such a thing.”

Years later, a friend showed Soss bits of beach glass “found right here on a North Side beach,” he recalls. “I was surprised. I mean, I think I always assumed you could find beach glass on the other side of the lake or on vacation in Jamaica, not right here.”

An early riser who bikes, Soss was in the habit of riding north to the turnaround by the Kathy Osterman Beach. “There’s usually about three- to three-and-a-half hours between when I get up and have to be at work,”he explains. “So one day, after my bike ride, I decided I’d lock my bike up and walk the beach.”

Soss took everything he found that day, laid it out, took a phone snap and sent it to his sister. “And then I just kept doing it,” he says. 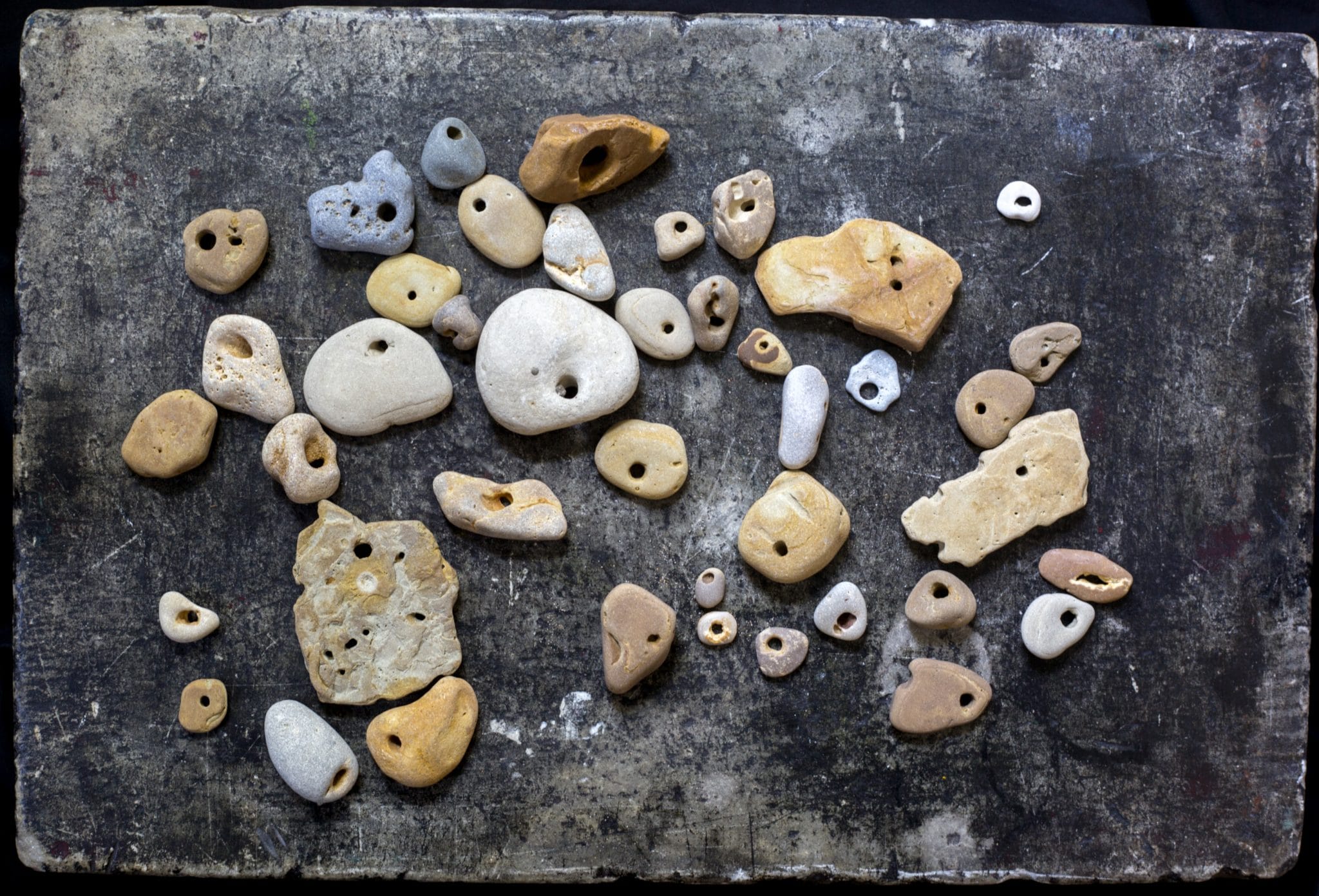 Each beach visit Soss makes brings with it an inevitable evolution: Enhancements that create ritual out of habit. Rules, guidelines and parameters form, some self-monitoring—such as practical limits set to keep the collections from overtaking and pushing him into hoarder territory. Others are quality judgements. “I do have my standards,” Soss laughs.

“Like anybody who collects something, you get a little more picky about what’s worth keeping,” he says.

“Overall? I’m not really interested in new stuff. Most of what I keep has been out in the lake for a long while. The real beauty comes when something has spent a lot of time in the water. A piece that’s been in there and the current has churned it around, scraped it up against the sand at the bottom and then given it to me. That’s what’s really beautiful.”

Soss bends down and picks up a small, soft-edged stone with a perfectly round hole in the center. “Like this one, this one’s a keeper. I have a whole box of these at home.”

The standards, I discover, are there—not just for glass, but for plastic, wood, metal—all of it.

I pick up a green plastic doodad from the top of a disposable cocktail. “No,” he says, disinterested. “I’ve got a lot of those.” 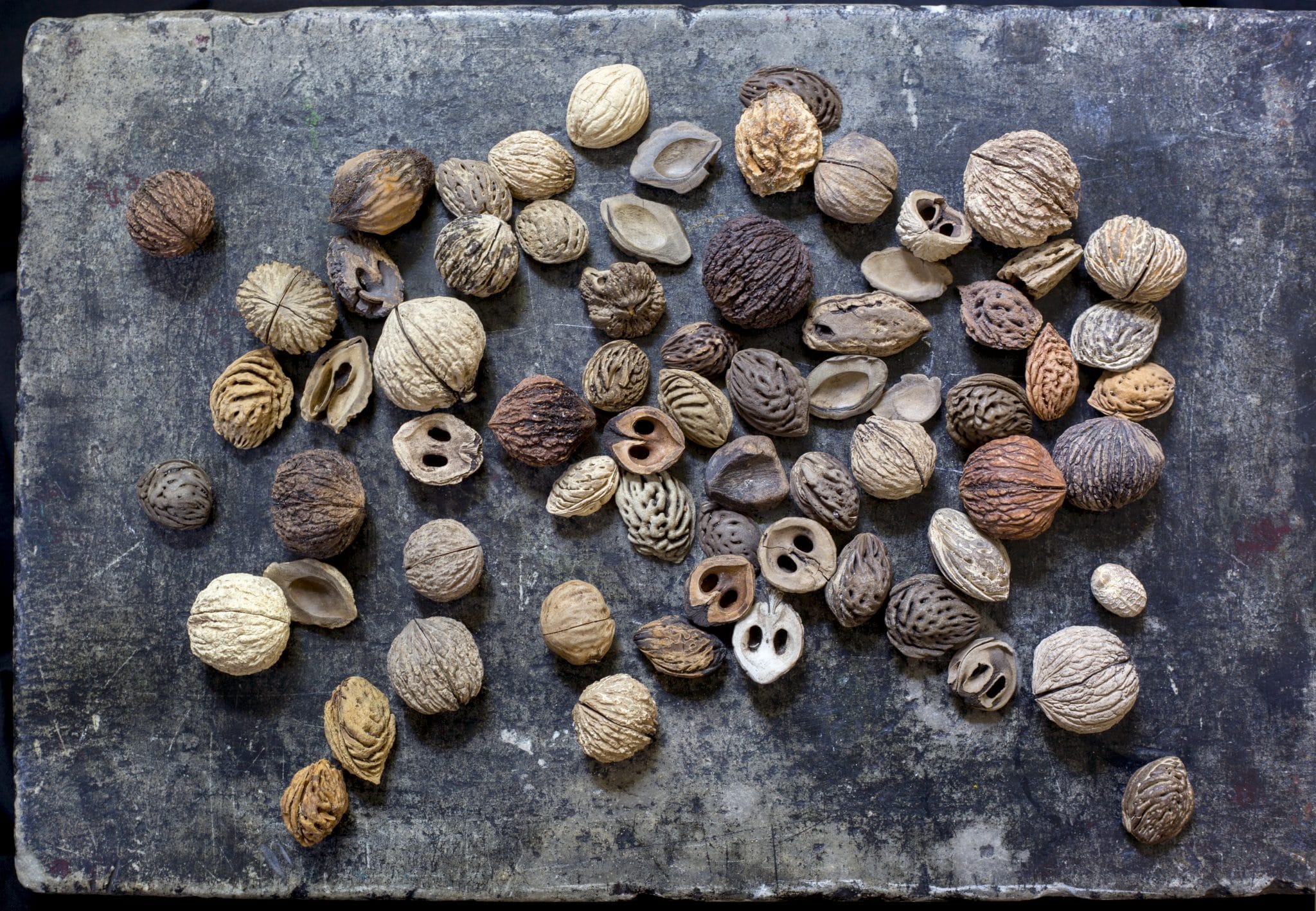 Driftwood bits that I find likewise get passed over. But a purple barrette is a keeper, a stone with a piece of glass stuck to it, and a cerulean blue shard. “An unusual blue,” he says.

This is where artistic instinct becomes apparent. Although John says he’s not a photographer (“I don’t have a proper camera, just use my phone, really, to document.”), and says he is never really looking for anything specific on his walks, as the morning progresses there is a certain rhythm and theme to what he finds, which shapes things. “If I have certain lengths and shapes of driftwood, say, I may pick up or reject the next ones based on that.”

Our feet crunch loudly on the wet stones as we move along. The sun gets hotter and the seagulls get screechy, annoyed. Soss explains that early morning is best for this sort of hunt, and that his favorite finds have happened not in “beachy” summer months when tractors come out and rake the beach to groom it, but in the spring and fall, or after a storm when the waves churn more things onto the shore. 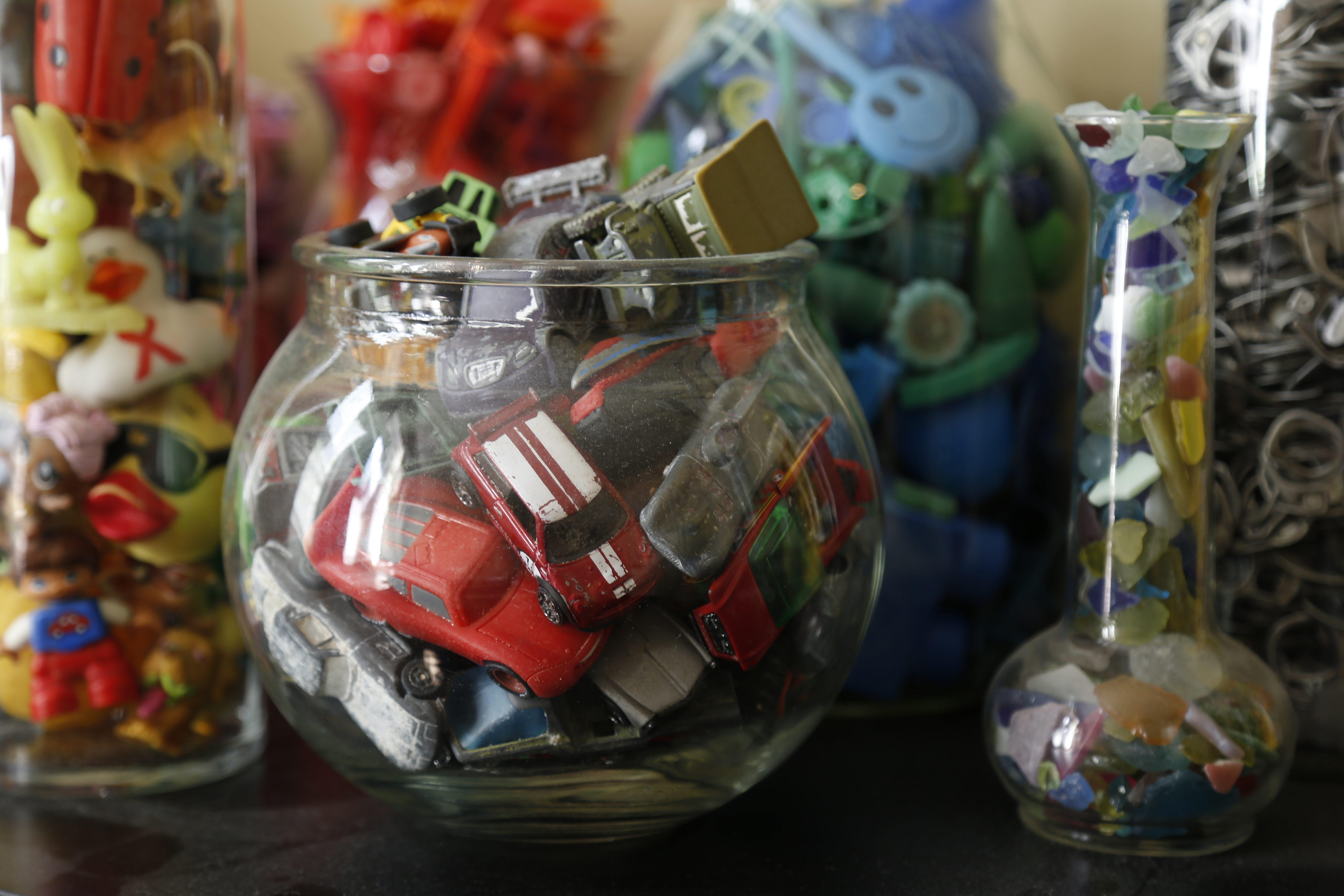 Moving up the beach in John’s wake, I’m conscious that being here is an intrusion on what is pretty much a private ritual. Discovery can be a joint venture, but what you find when you are alone—well, that’s in some ways, more special.

Think about some experience or object you really love. If I were to find one of those objects, knowing it was spot-on perfect for your collection, would you treasure it as much as the ones you found on your own? You might be warm-fuzzy pleased: I found this thing for you and thought to give it to you… or might even think of me whenever you saw it. But that, in fact, is part of the problem. If you’d found that special piece on your own, unexpectedly saw it and seized on it, the thrill of that discovery, that moment in time, the exact description of the space, the place, the feel of the air, the journey, would be wholly yours. You’d pay attention more, remember more. Story would come of that heightened awareness. And you would share that story, and maybe that object, with the world later. But the discovery itself? That would be your own.

Soss tells a story that confirms this. He was drifting along a favorite beach one day, when along came an old man. He watched and followed along, asking John what he was doing, learning about John’s search to find the lake’s little treasures. 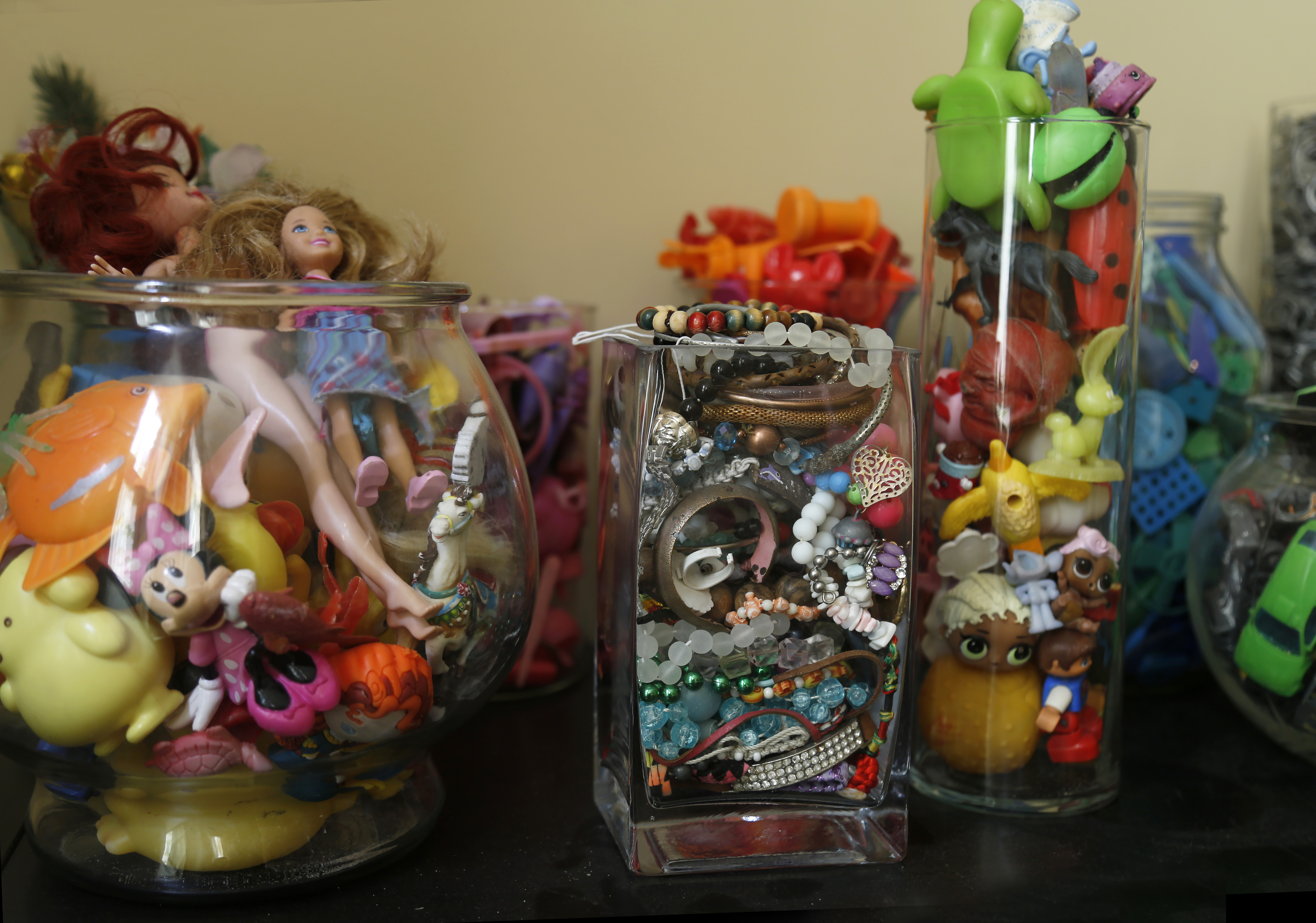 “He started picking things up with me, showing them to me, keeping some, giving me others. And then he went away,” says John. “But then he came back another day. And another. And then on a regular basis he started coming to that beach, trying to find for me what things he thought I might like. He’d bring them to me and say, ‘You know, I really like doing this! It’s become a habit for me.’”

“And suddenly, that beach wasn’t mine anymore. It was his. I couldn’t explain to him that as much as I appreciated his trying to help me, the discovery, the reverie of the quiet walk and search was as much a part of what I was doing as the little bits I actually kept.”

John jokes that he should’ve put a blindfold on me, so I wouldn’t know which beach I was on. This makes me feel cautious, uncomfortable, threatened and at the same time, oddly voyeuristic.

Still, within an hour, I have picked up eighteen pieces of glass, a red lego, six pieces of driftwood, a whole empty eggshell, two goldfinch feathers, some broken tile, some slag, four rocks and a golf tee. I show them all, feeling like a little kid trying to please, trying to produce finds that measure up to the standard.

What John doesn’t want, I keep. But then, I find myself discovering bits I know he’d like, but rather than show him, quietly slip them into my pocket, feeling like a thief. An interloper. The old man.

We have walked the entire length of the beach. Combing the edges where the tractor couldn’t reach, John’s satchel is full of driftwood, rocks and a large piece of heavy slag I found that he has agreed to tote back so I can stick it on my bookshelf. There is a feeling that whatever was to be found has been found.

The intensity lifts, we chatter more, and walk faster to get back to the car. I am crankily aware I haven’t had any coffee yet, and that I really need to pee.

Then I see it: An 18-karat gold diamond ring. It’s just lying there on the sand, winking at me. The diamonds are set in a horseshoe, and the ring is heavy, a little clunky, male, artless. I think it’s ugly. But, it’s gold! And there are diamonds. And I’m pretty sure that horseshoe symbolizes what a lucky thing it is that I am here, stealthy interloper or not.

“Wow,” John says, quietly, “in all the years I’ve done this, I’ve never found a ring that valuable.”

It’s a weird moment. I’m elated, because I just found this thing of “value.” (Yay, me! Best magpie of the morning!) But this is John’s beach. And the ring is ugly.

And John has just found the most sheeny, velvety little piece of driftwood. He shows it to me and I hear myself blurt, “I’ll trade you this ring, for that driftwood.”

John hesitates. I wonder if he’s surprised I don’t want the jewelry, or thinks me stupid for wanting wood more than diamonds. Or can’t believe I’d ask him to trade such a pretty piece of wood, for such an ugly, manmade thing.

In the end? John took the ring. You can see it in the photo he shot that day and posted May 31, a footnote, off in one corner, hanging on a little branch, looking very out of place. I got the driftwood, a fat piece of slag, and a good story to tell you. Probably the better deal.

You can view John’s “On the Beach” photos here: instagram.com/heysossman