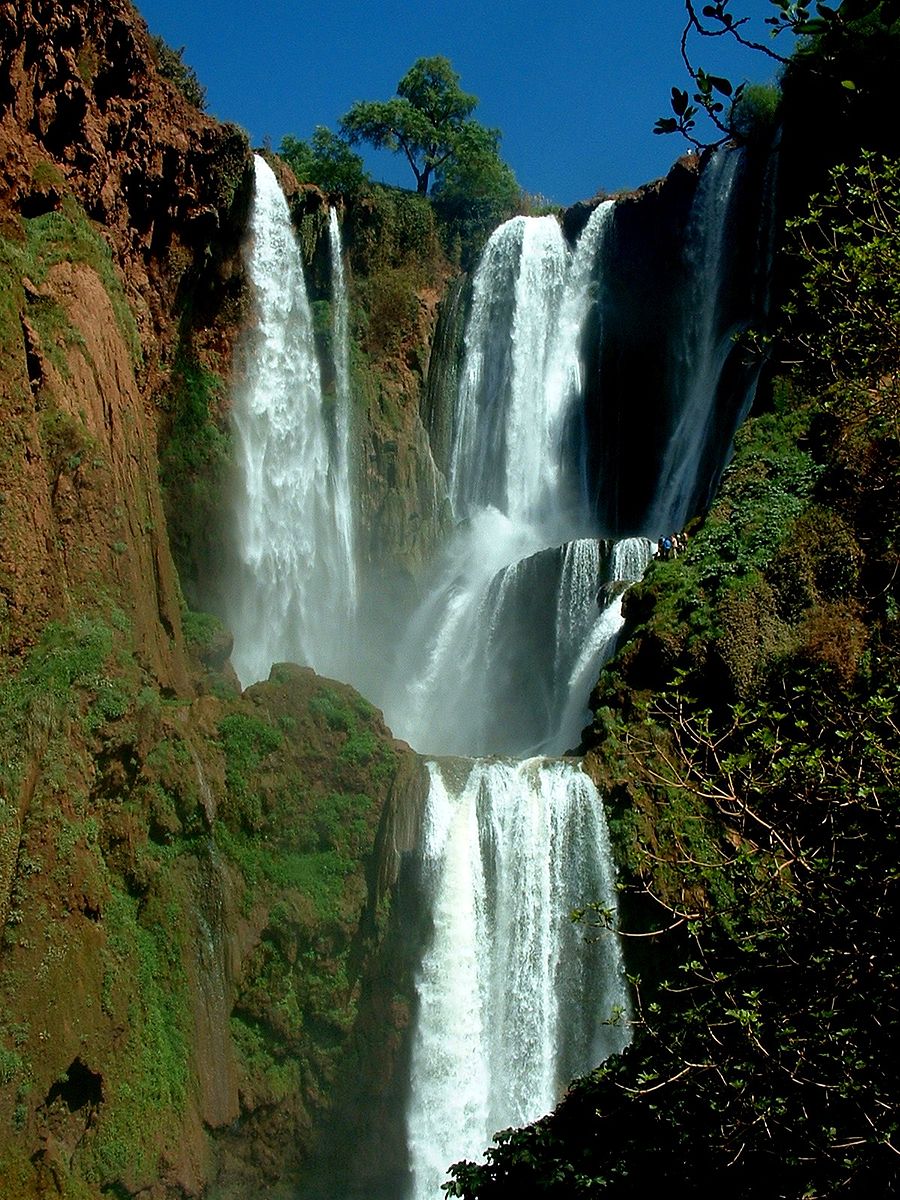 A photo of the Cascades d’Ouzoud in North/Central Morocco in full-ish flow.

ARIES (March 21-April 19): Author Anne Carson describes part of her creative process in this way: “Sometimes I dream a sentence and write it down. It’s usually nonsense, but sometimes it seems a key to another world.” I suspect you might be able to benefit from using a comparable trick in the coming days. That’s why you should monitor any odd dreams, seemingly irrational impulses or weird fantasies that arise in you. Although they may not be of any practical value in themselves, they could spur a train of thought that leads you to interesting breakthroughs.

TAURUS (April 20-May 20): “The idea of liberation through the suppression of desire is the greatest foolishness ever conceived by the human mind,” wrote philosopher E.M. Cioran. I agree that trying to deny or stifle or ignore our desires can’t emancipate us. In fact, I’m inclined to believe that freedom is only possible if we celebrate and honor our desires, marvel at their enigmas and respect their power. Only then can we hope to refine them. Only then can we craft them into beautiful, useful forces that serve us rather than confuse and undermine us. The coming weeks will be an excellent time for you to engage in this spiritual practice, Taurus.

GEMINI (May 21-June 20): “Remember that sometimes not getting what you want is a wonderful stroke of luck,” says the Dalai Lama. Ain’t that the truth! When I was twenty-two years old, there were two different women I desperately yearned for as if they were the Muse Queens of Heaven who would transform me into a great artist and quench my infinite passion. Fortunately, they both rejected me. They decisively set me free of my bondage to them. Later, when I was older and wiser, I realized that blending my fortunes with either of them would have led me away from my true destiny. I got lucky! In a similar but less melodramatic way, Gemini, I suspect you will also get lucky sometime soon.

CANCER (June 21-July 22): “Don’ts for Boys: Or, Errors of Conduct Corrected” was an advice book for boys published in 1902. Among many other strictures and warnings, it offered this advice: “Don’t giggle. For the love of decency, never giggle.” There was additional counsel in the same vein: “Don’t be noisy. The guffaw evinces less enjoyment than the quiet smile.” Another exhortation: “Don’t tease. Be witty, but impersonal.” In accordance with astrological omens, I hereby proclaim that all those instructions are utterly wrong for you right now. To sweetly align yourself with cosmic rhythms, you should giggle and guffaw and tease freely. If you’re witty—and I hope you will be—it’ll serve you well to be affectionate and personable.

LEO (July 23-Aug. 22): “Simplicity is about subtracting the obvious and adding the meaningful,” writes designer John Maeda. “The ability to simplify means to eliminate the unnecessary so that the necessary may speak up,” says artist Hans Hofmann. “Simplicity strips away the superfluous to reveal the essence,” declares a blogger named Cheo. I hope these quotes provide you with helpful pointers, Leo. You now have the opportunity to cultivate a masterful version of simplicity.

VIRGO (Aug. 23-Sept. 22): Your keynote is the Japanese word shizuka. According to photographer Masao Yamamoto, it means “cleansed, pure, clear and untainted.” One of his artistic practices is to wander around forests looking in the soil for “treasures” that emanate shizuka. So in his definition, the term isn’t about being scrubbed or sanitized. Rather, he’s interested in pristine natural phenomena that are unspoiled by civilization. He regards them as food for his soul. I mention this, Virgo, because now is an excellent time for you to get big doses of people and places and things that are cleansed, pure, clear and untainted.

LIBRA (Sept. 23-Oct. 22): Libran blogger Ana-Sofia Cardelle writes candidly about her relationship with herself. She keeps us up to date with the ever-shifting self-images that float through her awareness. Here’s one of her bulletins: “Stage One Me: I’m the cutest thing in the world. Stage Two Me, two seconds later: No, I’m a freaking goblin. Stage Three Me, two seconds after that: I’m the cutest goblin in the world.” I’m guessing that many of you Libras have reached the end of your own personal version of Stage Two. You’ve either already slipped into Stage Three, or soon will. No later than October first, you’ll be preparing to glide back into Stage One again.

SCORPIO (Oct. 23-Nov. 21): “There’s no such thing as love,” said Scorpio painter Pablo Picasso, “there are only proofs of love.” I’m tempted to believe that’s true, especially as I contemplate the current chapter of your life story. The evidence seems clear: you will thrive by engaging in practical demonstrations of how much you care. You’ll be wise to tangibly help and support and encourage and inspire everyone and everything you love. To do so will make you eligible for blessings that are, as of this moment, still hidden or unavailable.

SAGITTARIUS (Nov. 22-Dec. 21): According to a Pew Research Study, nearly seventy-five percent of Americans say they talk to God, but only thirty percent get a reply. I’m guessing the latter figure will rise dramatically for Sagittarian Americans in the next three weeks, however. Why? Because the astrological indicators suggest that authorities of all kinds will be more responsive than usual to Sagittarians of all nationalities. Help from higher powers is likely to be both more palpable and more forthcoming. Any communications you initiate with honchos, directors and leaders have a better-than-normal chance of being well-received.

CAPRICORN (Dec. 22-Jan. 19): One day in October 1926, author Virginia Woolf inscribed in her diary, “I am the usual battlefield of emotions.” It was a complaint, but also a brag. In fact, she drew on this constant turmoil to fuel her substantial output of creative writing. But the fact is that not all of us thrive on such ongoing uproar. As perversely glamorous and appealing as it might seem to certain people, many of us can do fine without it. According to my analysis, that will be true for you in the coming weeks. If you have a diary, you might justifiably write, “Hallelujah! I am NOT a battlefield of emotions right now!”

AQUARIUS (Jan. 20-Feb. 18): Anthropologist Margaret Mead had definite ideas about “the ways to get insight.” She named them as follows: “to study infants; to study animals; to study indigenous people; to be psychoanalyzed; to have a religious conversion and get over it; to have a psychotic episode and get over it.” I have my own list of ways to spur insight and inspiration, which includes: to do walking meditations in the woods on a regular basis, no matter what the weather; to engage in long, slow sex with a person you love; to spend a few hours reviewing in detail your entire life history; to dance to music you adore for as long as you can before you collapse from delighted exhaustion. What about you, Aquarius? What are your reliable ways to get insight? I suggest you engage in some of them, and also discover a new one. You’re in the Flood of Radical Fresh Insights Phase of your astrological cycle.

PISCES (Feb. 19-March 20): Stanley Kubrick made masterful films, but most of them bore me. I regard John Ashbery as a clever and innovative poet, but I’ve never been excited by his work. As for painter Mark Rothko, I recognize his talent and intelligence, but his art leaves me empty. The music of Nora Jones is pretty and technically impeccable, but it doesn’t move me. In the coming weeks, Pisces, I invite you to make the kinds of fine distinctions I’m describing here. It will be important for you to be faithful to your subjective responses to things, even as you maintain an objective perspective about them and treat them with respect.

Homework: Make two fresh promises to yourself: one that’s easy to keep and one that’s at the edge of your capacity to live up to.