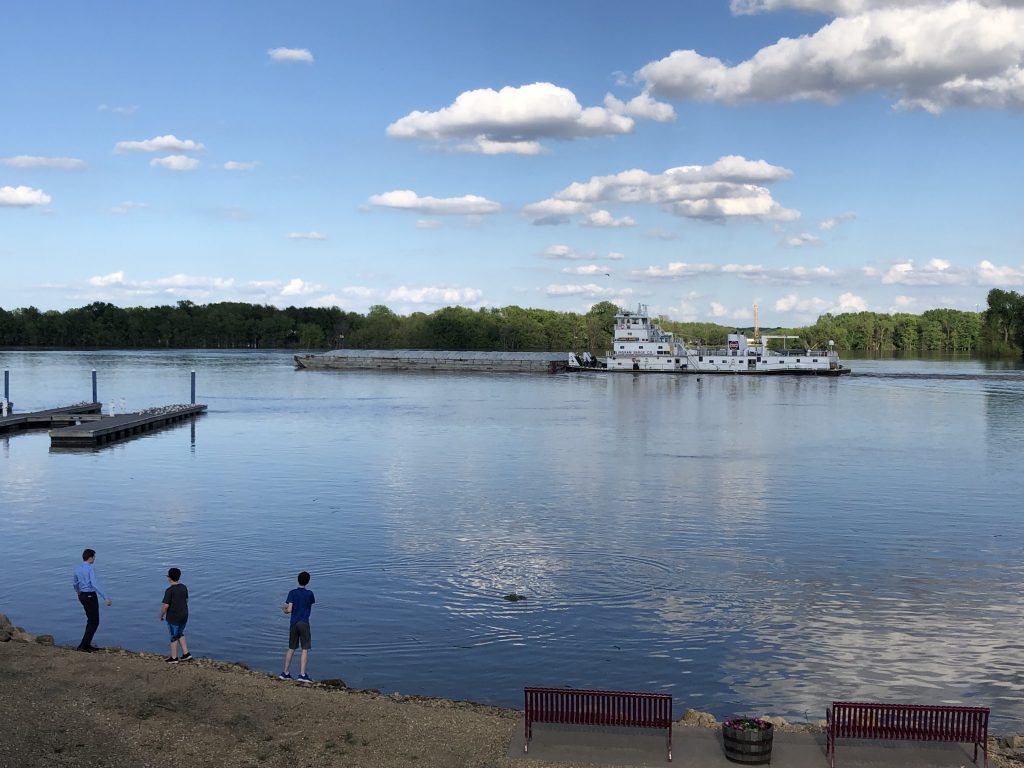 CLINTON, IOWA—The Midwest offers summer getaways ranging from bikinis and Speedos to the natural beauty of dunes and sparrows. But every summer I make sure to drive to Clinton, Iowa.

This is summer’s American Trinity: 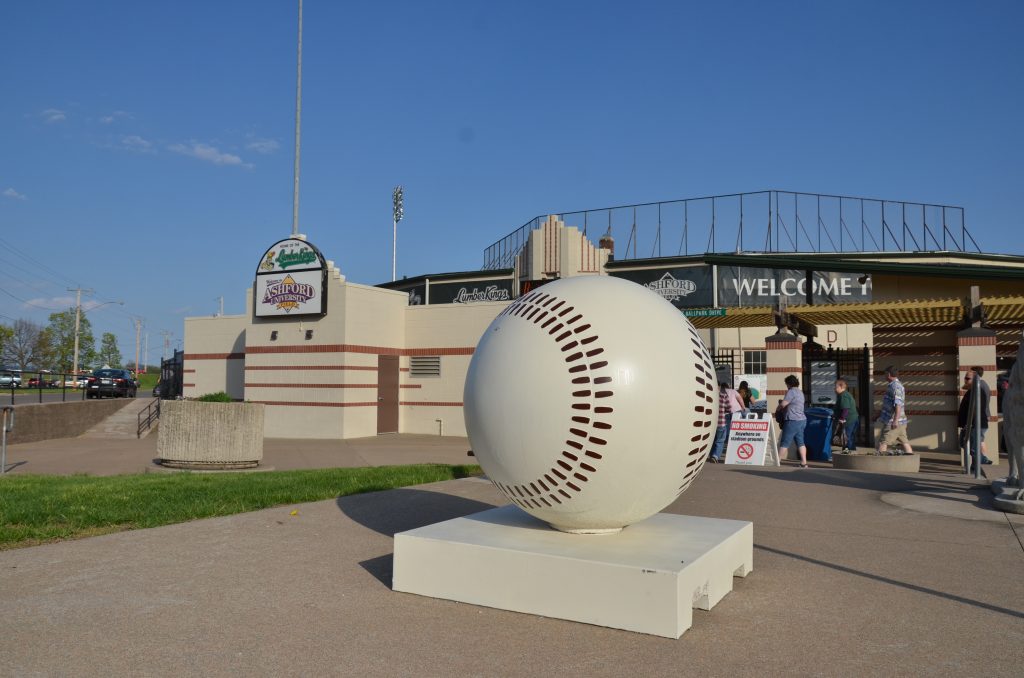 • The Clinton LumberKings play low Class A ball in a tiny 4,800-seat ballpark built in 1937 by the WPA. Originally called Riverview Stadium, the cinderblock and brick jewel is detailed with art deco and is one of the fifteen oldest pro ballparks in America.

• The newly named NelsonCorp Field is a five-minute walk from the Mississippi River, where you will find the Candlelight Inn supper club atop the two-level Clinton Marina. The Candlelight’s upstairs patio has a sterling view of the river as well as the four-by-seven mile Lake Clinton, the widest part of the entire Mississippi River. The patio can seat up to one-hundred people. Guests sip on Brandy Old Fashioneds along a twenty-foot clear bar top with lost keys, forgotten bracelets and bottle caps that resemble the muddy bottom of the Mississippi. The quirky bar was designed by Jan Prescott, the late mother of Candlelight owner Matt Prescott.

• And just north of the stadium there’s the excellent Riverview Recreational Vehicle Park. I’ve stayed there with my Ford Transit camper van. The park has twenty-seven pads, all including 30/50 amp electricity and water. Shower and laundry facilities are at the marina.

There is nowhere else in America where, within a half-mile radius, you can camp out, watch a baseball game in a historic stadium and walk to a supper club on the Mississippi River.

Clinton (population 25,480) is a two-and-a-half-hour drive from Chicago. I try to wind it down and take the historic Lincoln Highway, which runs out of west suburban Plainfield (where it crosses Route 66), through Dixon and across the river into Clinton. The highway is popular with bikers and back-roaders. 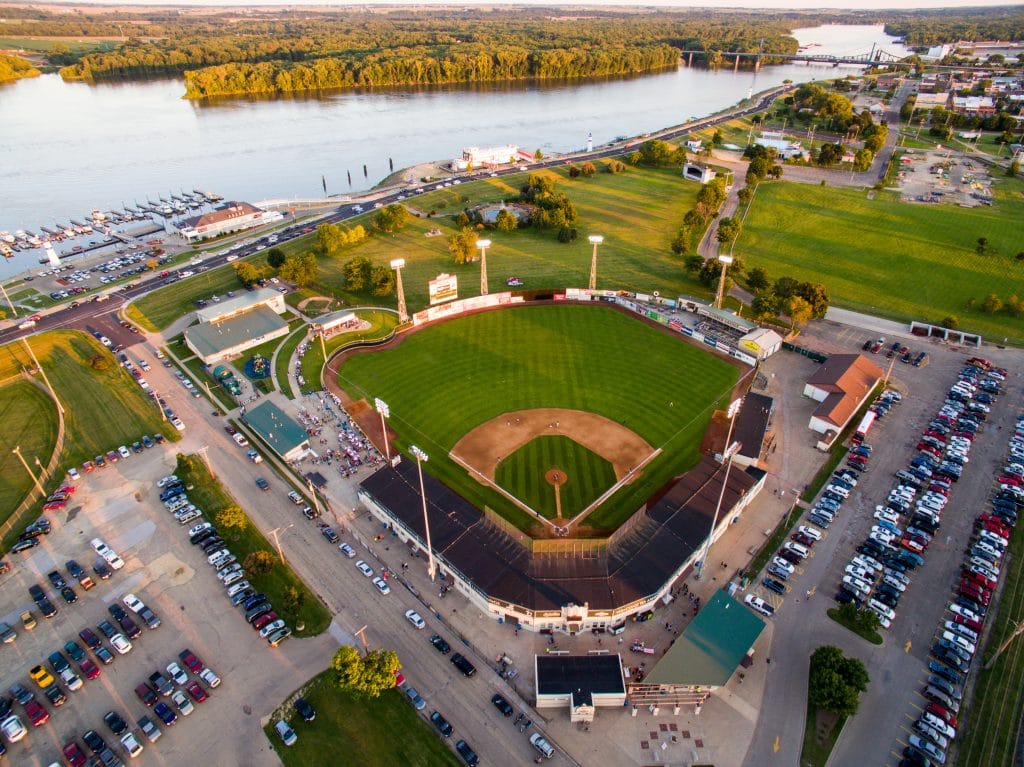 I recommend Clinton and it never disappoints.

My late friend, Chicago restaurateur Eric Palm, always talked about the Clinton ballpark. I drove into Clinton on Memorial Day weekend and thought of Eric as I saw Clinton’s deep blue skies accented by peaceful white clouds. Everything seemed clearer than it did in Chicago.

Clinton does not have all the traffic of Galena, Illinois or New Buffalo, Michigan—in fact, it doesn’t have much traffic at all. The sleepy downtown area is anchored by the four-story John D. Van Allen & Sons building, a National Historic Landmark built in 1913-15 and designed by architect Louis Sullivan. Originally a department store, the terra cotta-accented Van Allen has been repurposed as an apartment building.

The historic baseball stadium is on the outskirts of downtown. The Canadian Pacific rails are along the parking lot near the ballpark entrance. Because of river traffic, Clinton used to be the nation’s lumber capital. At one time there were fifteen lumber mills along the river through Clinton. No mills are left.

The neighboring RV park was filled on Memorial Day weekend and included a vintage blue-and-white school bus called “The Holy Roller.” A large typewritten sign near the front door read, “Every family has a story… welcome to ours.”

At the ballpark, attendance on a warm, family-friendly afternoon before Memorial Day was 860. The game was played in a snappy two-and-a-half hours. In the minor leagues, there are no replays, pitch count boards and thirty-one manager visits to the mound. Catching a LumberKings game on a Sunday is a can’t-miss excursion. 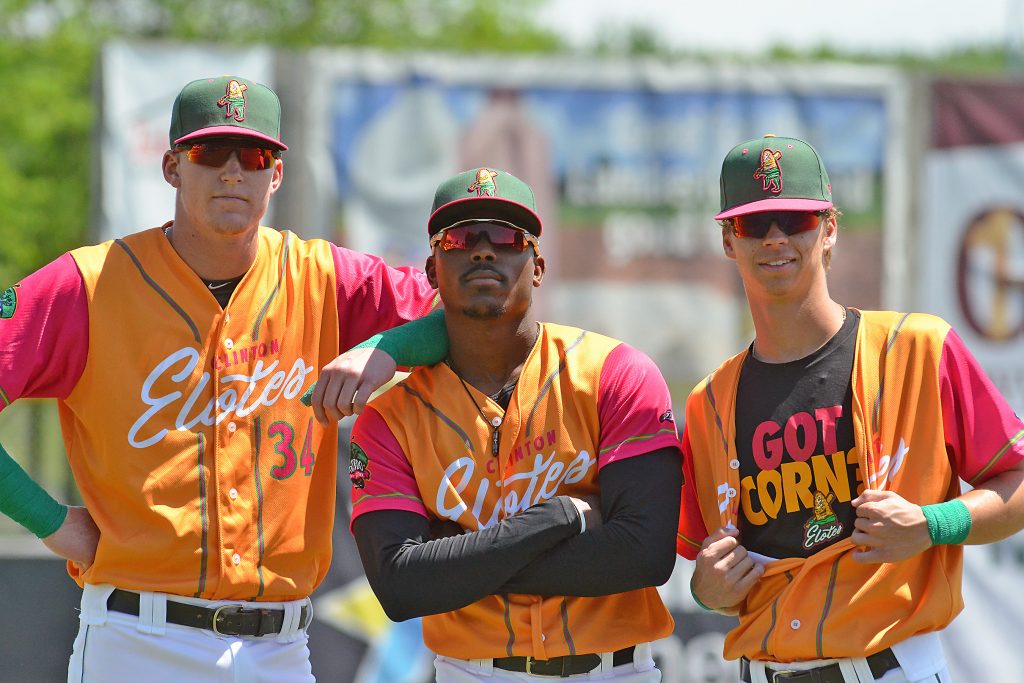 Every Sunday throughout the summer the LumberKings become the Clinton Elotes (grilled corn, a popular street food in Mexico) as part of Minor League Baseball’s (MiLB) second annual Copa de la Diversion (Copa) initiative. By becoming Elotes, Clinton honors the heritage of the Latino communities in Eastern Iowa, Western Illinois and within baseball. Clinton wears colorful Elotes uniforms with angry green ears-of-corn baseball caps. As I walked up to the ballpark I heard salsa and Tejano music as well as the hits of Santana.

Tequila seemed to be the only missing ingredient.

I met ballpark chef Regina Jimenez, a Cuban transplant from Miami who lives in Clinton. She made all the themed Elotes food: Cuban sandwiches ($7), tamales ($3), taquitos ($1.50), elotes corn ($4) and even shots of espresso ($2). Jimenez cooks for visiting players and she says she is on board because the LumberKings were unable to find a local Latino restaurant to participate in the Copa program.

Jimenez found time to run away from her food stand to scream at the umpires when they ruled a no-catch on a Burlington Bees hit to center field which ended a fifth-inning no-hitter for Elotes ace pitcher Chris Vallimont.

Appropriately for Regina’s heritage, the LumberKings are in the first year of a two-year agreement with the Miami Marlins. The LumberKings are the only remaining charter member of the Midwest League and are in their sixty-fourth consecutive season of play. More than 230 Clinton players have graduated to the major leagues.

Between 1959 and 1965 the LumberKings were affiliated with the Chicago White Sox. Future Cy Young Award winner, convicted felon and organ player Denny McLain was a member of the 1962 Clinton C-Sox. He was eighteen years old and had just graduated from Mt. Carmel High School in Chicago. In 1962 McLain threw eight complete games and struck out ninety-three Midwest League batters over ninety-one innings. McLain will be celebrated at 7pm on August 16 in a bobblehead giveaway depicting him in his Clinton uniform. He will be in Clinton to sign autographs, pose for pictures and throw out the ceremonial pitch. McLain is touched by the honor. He was not included in the Detroit Tigers commemorative bobbleheads that celebrated their 1968 World Championship team. McLain won thirty-one games in 1968.

The LumberKings are one of a handful of community-owned teams in minor league baseball. They are governed by a twenty-six-person board of directors. In 1937, a share in the team’s ownership cost $10. Ted Tornow has been Clinton’s general manager for twenty-one years.

“The drawbacks of community-owned is that if you need a big renovation, you have to go to the community and get the money,” Turnow says in a post-game interview after fixing the clubhouse washing machine. “When we did our [$3.6 million] renovation in 2006, we had a manager, a hitting and pitching coach and a trainer. We didn’t have a strength and conditioning coach, a video coordinator. Big league clubs are strict on nutrition. They have to have so many proteins and carbohydrates. We didn’t have that before. There’s no room in the clubhouse right now. We don’t have a full kitchen. We didn’t think of a video room in 2006. I don’t know if it will pan out. We’ve never made a cash call in my twenty-one years here. The years we’ve made money it has gone back into the facility in partnership with the city.

“The advantages? Oh, my. We have approximately a thousand shareholders and owners. They go back to 1937, so we’re in the fifth generation of people that have owned shares. Do they all live in Clinton, Iowa? No. Do they all have an interest in keeping the team here? Every single one of them. The shareholders run the scoreboard, they take tickets, they work the beer committee. So we save money on payroll. It shows complete community spirit, of ‘Hey, we want to keep this place alive.’” Even the green box seats from the 2006 renovation were sourced from Custom-Pak blow molding in Clinton.

“There are precious few ballparks that so successfully combine the old and the new… and any community trying to figure out what to do with a historic, old facility should use this ballpark as a blueprint,” the popular Ballpark Digest writes. “It is a scene right out of a Norman Rockwell print.” Indeed, grandstand fans can see the former Ohio River Company Omar Riverboat (circa 1935) in the Mississippi River. She is now used for summer stock theater. The original galley area and crew’s quarters became the Clinton Area Showboat Theatre.

Turnow says, “This is a must-see stadium. You can sit five feet from the players. We don’t have anything like a jumbotron. Nothing fancy. It’s just this. We get people from Chicago here all the time.”

And why does he stay, summer after summer?

He looked down at an old grandstand seat and answered, “My ex-wife asked me that. And my current wife asked me that. It’s home. It’s similar to where I grew up in the sixties and seventies, Menasha, Wisconsin outside of Appleton. To be part of this is a dream come true. This is the crossroads of the Midwest.”