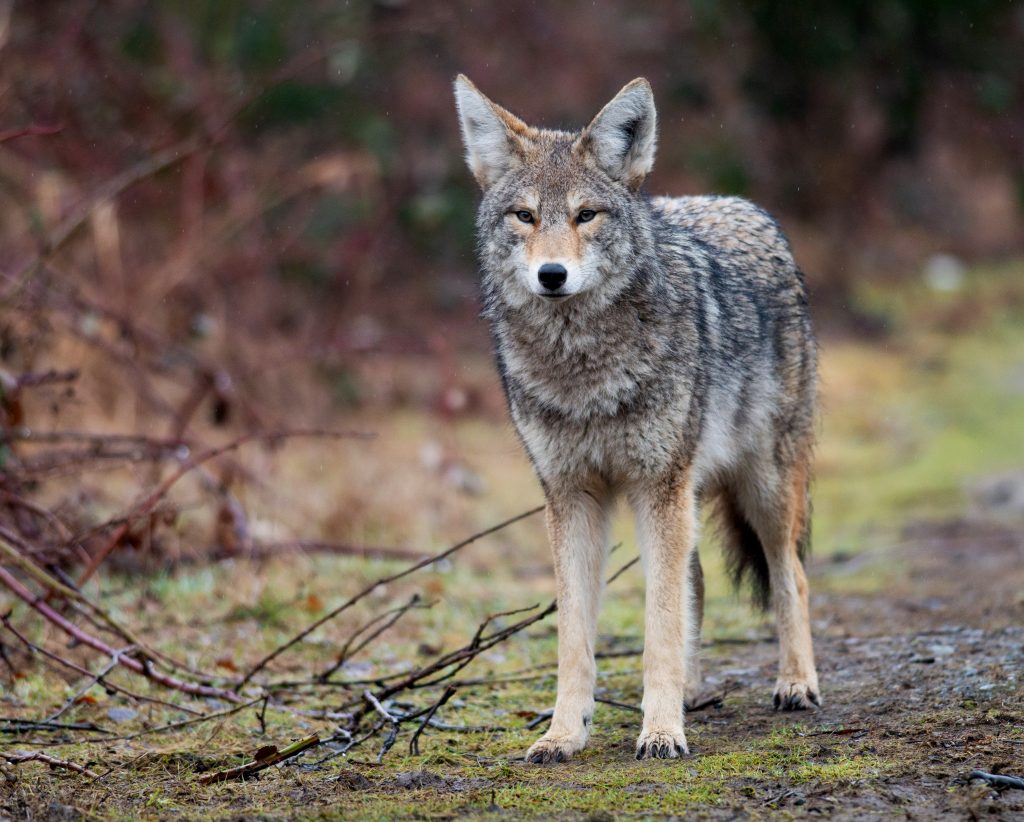 You instinctively identify an urban landscape by its lack of nonhuman life—human-dominated spaces, paved over and populous, with ecosystems consisting only of the single chief species. It makes sense. Walking around, you might see a pigeon pecking at crumbs, or a mouse skittering under train tracks, but little else.

For Chicago, a city boasting 275 bird species, sixty-four fish species and thirty-eight mammal species, this instinct could not be more wrong. Those figures come courtesy of the Chicago Nature and Wildlife Plan, written in 2006 and updated in 2011 by the Mayor’s Nature and Wildlife Advisory Committee, which outlines ways to “protect and expand ecosystems for the benefit of wildlife and people” in Chicago.

“When my children were little I used to marvel that everything I wanted to teach them about nature, I could teach them right in the city,” says Jill Riddell, host of the podcast “The Shape of the World,” and a member of the Wildlife Advisory Committee. “There was life, there was death, there was birth, there were territorial displays. Fights and conflicts, mating. Everything was happening in the city.” 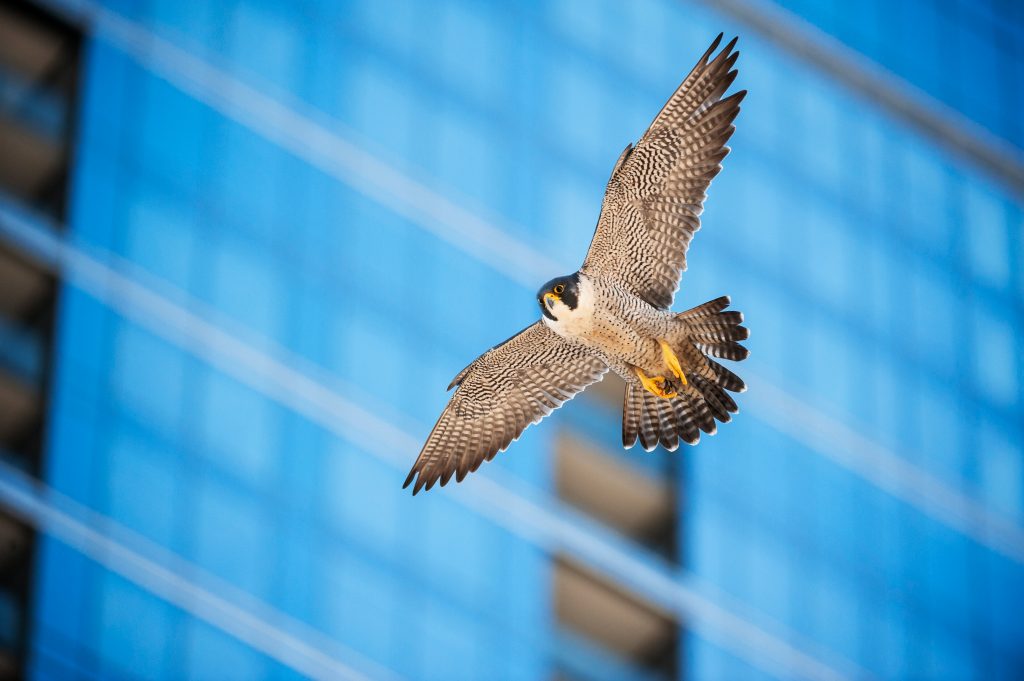 Peregrine Falcon flying by building in the city

Nowhere was this truer than in Dacey Arashiba’s flower box which, in 2016, played host to the meeting, mating and nesting of a pair of peregrine falcons — Linda and Steve, affectionately. The flower box, which Arashiba hadn’t tended in years, would serve as the twenty-eighth-floor nursery for four falcon chicks, documented in all their fluffball splendor by wildlife photographer Luke Massey.

DDT posed an existential threat to peregrines in the mid-twentieth century. The insidious pesticide weakened peregrine eggs and wiped out much of their prey, landing the falcons on the Endangered Species List in 1973. Hoping to restore their numbers, the 1985 Chicago Peregrine Program oversaw the release of forty-six captive-bred peregrines into the city.

“Peregrines need canyon environments in order to live,” Riddell says in an interview. “So the committee thought, what if they lived in downtown cities? Cities look a lot like canyons, and there are a lot of birds for them to eat.”

While still technically an endangered species, there are now thirty nesting pairs in Chicago: “probably full saturation of what could be here,” Riddell says.

In addition to constructing residences, museums and office buildings for human beings, architects were unwittingly designing a makeshift canyon for the endangered peregrines—a challenge to the human-exclusive concept of urban space.

The peregrine falcon is far from the only avian for which Chicago plays a facilitating role. During the months of May and September, hundreds of bird species fly up from and back down to South America, Central America and the Caribbean, following flyways they have been flown for thousands of years. Among the colorful cadre are scarlet tanagers, Baltimore orioles, yellow warblers and black-throated blue warblers.

In mammalian excellence, Chicago has the highest concentration of coyotes in the world—4,000 in Cook County, according to a “conservative guess” by Stanley Gehrt, professor of wildlife ecology at Ohio State University. Accordingly, wild coyote sightings in Chicago’s urban and suburban areas are common. In one especially creepy instance, National Geographic revealed in 2016 that a coyote lived exclusively in a Chicago cemetery, nourished by chickens that mourners left on the graves.

Despite their pervasiveness and the violent-sounding classification “carnivore,” Riddell maintains that we ought not fear. “They have changed their habits to adjust to urban places. In Chicago, they tend to be nocturnal, and that’s not normal for coyotes.” As little as we want to do with them, they want less to do with us.

Reports of wild coyotes don’t often include violence—outside of hunting small prey, they tend to be a meditative bunch. Seth Magle, director of the Lincoln Park Zoo Urban Wildlife Institute, was jogging when, “not fifteen feet from me was this coyote essentially posing in the dawn light, his breath curling around his face. I fumbled for my phone, and he ran off before I could get a picture.”

The Urban Wildlife Institute monitors Chicago’s wildlife to better understand how we can healthily coexist. In the course of his work, Magle has noticed people often want to intervene when face-to-face with unusual wildlife. Rather than approach or repel, he says, the best course of action is to live and let live: “When I have people call me and ask, ‘I have a coyote on my block, what do I do?’ they don’t like it when my answer is, ‘You don’t have to do anything. It belongs there, it’s fine.’”

In addition to the erroneous observation that urban spaces consist only of human beings, people often think it should be that way, that unusual wildlife is a threat to the stability of a humans-only space. At best, the instinct is a misunderstanding of the benefits of biodiversity, a high level of which serves all members of an ecosystem. At worst, it’s an extension of the colonialist instinct, which reduces the natural world to fodder for forward progress.

In the same interview, Riddell recounts a conversation with Philip Enquist, longtime architect for Skidmore, Owings, and Merrill, who coined the term “re-wild” to describe efforts to make cities more accommodating to wildlife. Instead of building at the expense of migrating birds, why not adapt to their evolutionary patterns?

Due to increasing environmental concerns, Chicago sees itself making a transition to “a city in which natural systems are being welcomed back into the physical fabric, rather than mastered and regularized,” as put by Jonathan Solomon, director of the School of the Art Institute of Chicago’s Architecture, Interior Architecture, and Designed Objects department. Downtown buildings now turn off their lights during migration to prevent birds colliding with glass; green spaces continue to be developed; organizations like the Urban Wildlife Institute are geared toward healthy cohabitation.

To view ourselves as separate from the ecosystems in which we live is also to mischaracterize our own nature. Despite efforts to make ourselves exceptional, humans remain mammals, subject to all the same challenges and conflicts, if on a larger scale. From this perspective, human architecture is a cousin of anthill, beehive and chrysalis construction: a sophisticated method for organizing and protecting the species. Critical theory notwithstanding, urban development is a mere variation on oft-replicated animal behavior.

That urban spaces feel like pure, exclusionary humanity is less a reflection of what’s before us, and more a reflection of our own tunnel vision. The meteorological miracle that is Chicago in the summertime may be best used by those who defamiliarize and re-wild this ecologically bustling urban landscape.