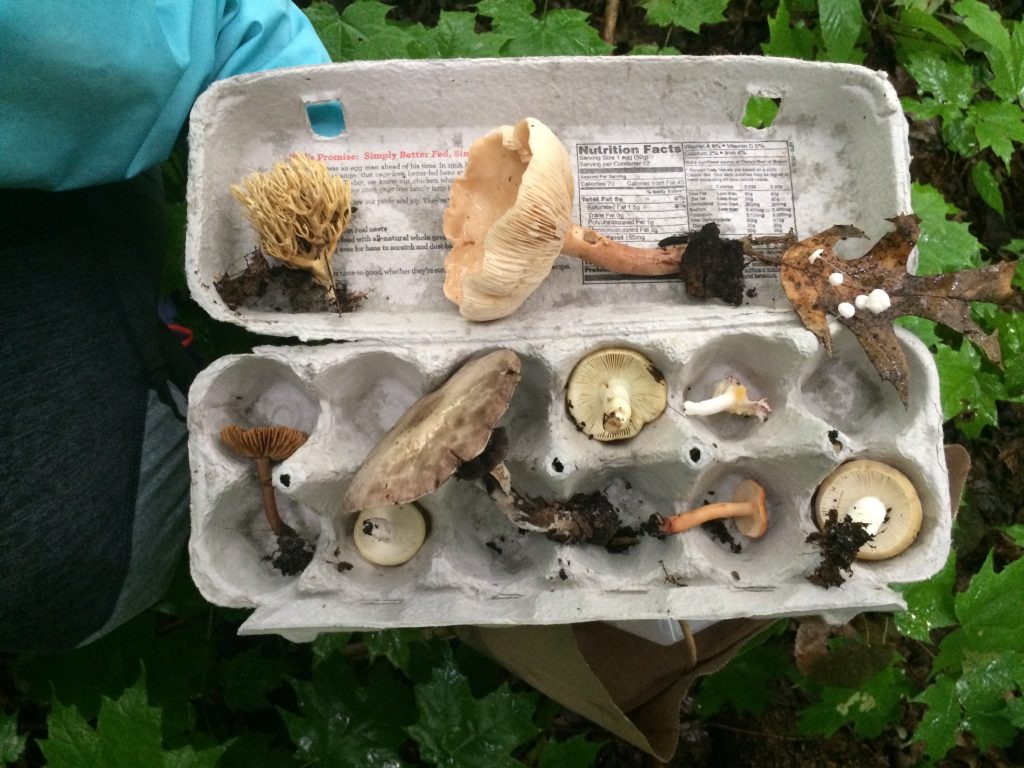 A fallacy regarding mushrooms is that not all mushrooms are edible. After several outings with the Illinois Mycological Association, I have come to appreciate why this is so. There’s an oft-repeated joke among mycophiles, a kind of legacy joke in the manner of “The Aristocrats” though much, much cleaner, and it finishes up something like this: All mushrooms are of course edible. Just some only once. 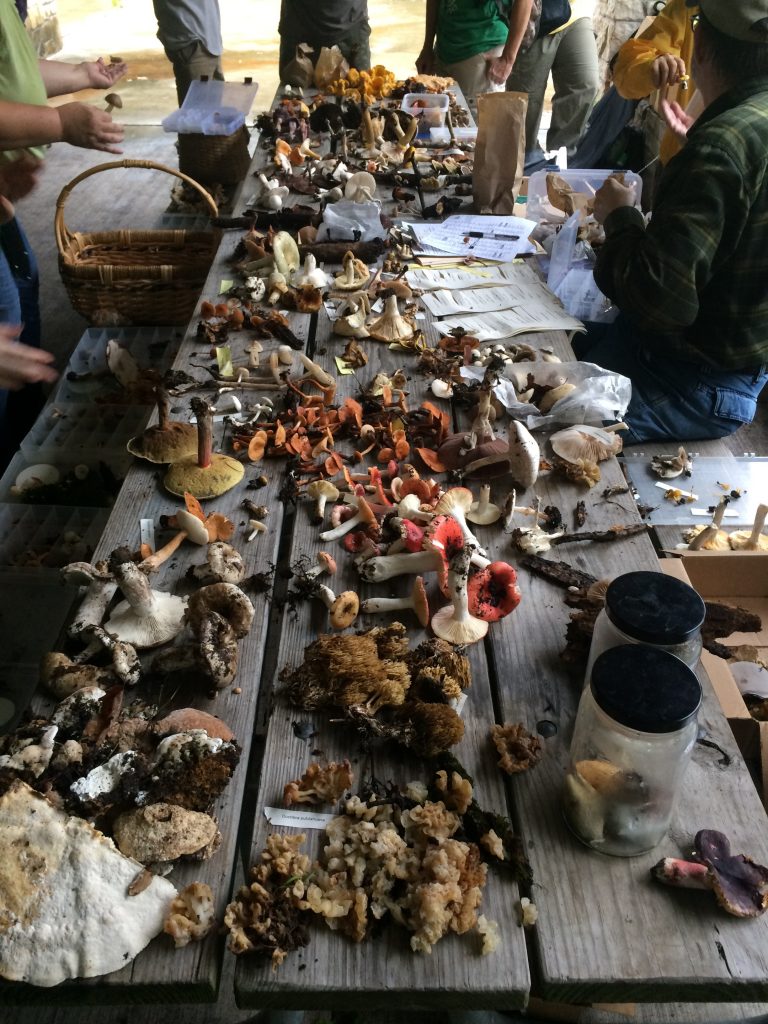 I’ve been a dues-paying member of the Illinois Mycological Association going on two years. The Illinois Mycological Association, also known as the IMA, is made up of officers and volunteers who plan forays (or outings), lectures and general mushroom programming for enthusiasts and the otherwise curious in the Chicago area. From the IMA constitution: “The purposes of the Association shall be to promote mycology as an avocation among its members and the general public, and to assist in the development of the science of mycology.”

Before I even knew of the group’s existence, I always liked the idea of hunting for mushrooms, whether here in Chicago or elsewhere. An excuse to head out into the woods and poke around in nature. I also have a myco-pedigree, as a matter of fact. No, not the surname. Moss identifies as a plant. Rather, my dad, years ago, competed in the National Morel Mushroom Hunting Championship, in Boyne City, Michigan. He did not win, but came home with a peachy mushroom collecting bag bearing the Lions Club International crest framed on each side by a morel, that scrumptious, iconic honeycomb-capped if-you-know-only-one, this-is-the-one-to-know mushroom.

IMA lectures and indoor programming are usually held at the Niles Historical and Cultural Center. Notable past speakers have included a coauthor of “Mushrooms of the Midwest” and the James E. Johnson professor of Sociology at Northwestern. Events in Chicago pop up for the urban mycophile from time to time. Last fall, the IMA scheduled an evening with celebrated mushroom photographer and artist Taylor Lockwood at the NHCC. The event, “The Mushroom Art Universe of Taylor Lockwood,” generated such interest it came to seem as if Toni Morrison had been booked to read at The Book Cellar. Lockwood’s slideshow presentation was moved to a site in Ravenswood to accommodate more people. Make no mistake: mycology is alive and well in the Midwest.

Each year, the IMA stages its biggest event at the Chicago Botanic Garden on the Sunday of Labor Day weekend: the Illinois Mycological Association Mushroom Show and Sale, featuring showcases, speakers and fungi tips. The day before, the group hunts for the mushrooms that will be on display. According to the website of the Illinois Department of Natural Resources, an estimated 2,000 species of mushrooms exist in Illinois (and more than 10,000 nationally). I and my girlfriend, a budding enthusiast herself, made this 2018 Labor Day weekend foray our first. We bought tickets for the Union Pacific North line, catching the train out of the city toward Niles where the hunt was to be held in Potawatomi Woods.

It was raining that morning. Still, close to twenty-five mycophiles showed up in slickers and knee-high rubber boots. We gathered beneath a picnic shelter at the woods’ outer edge. One of the IMA officers strolled over and introduced herself. Within minutes, we had met many in the group. All outdoors people, as expected; mostly super-mellow, as suspected. Along with the two of us, there were several other IMA first-timers. Through pre-foray chitchat my girlfriend and I discovered that only we had no prior actual mushroom-hunting experience. (There were also visual clues, I suppose: I was the only person attired in shorts for an activity focused on combing through flora to discover the fruiting bodies of fungi.)

At 10am we set out, equipped with empty egg cartons and a clear plastic compartment tray to collect our finds. The group spread out, with many, including us, remaining near the forest perimeter. We found our first within minutes. Attached to a downed branch that was blocking our way, the mushroom was tiny, a pinkish flesh color, part of an irregular grouping spread out over the bark. We commemorated the event with a photo, then moved on. More sightings were soon to follow. Being myco-tyros, we were eager to grab them all. We found red-capped toadstools straight out of Super Mario Bros, or off a freshman dorm blacklight poster; we found something that resembled coral reef algae (although not sure whether those were actual mushrooms—we had next to no idea what anything was). We found some with upturned caps, and some on leaves that looked like rolls of button candy.

One of the pleasures of mushroom hunting is you don’t have to know what you’re doing to achieve a certain level of proficiency. They’re easy to find. Once you start watching out, you realize mushrooms are everywhere: on tree trunks, at the base of trees, where tree stumps once were, in grass patches, on rotten logs, near mossy clumps. The most helpful tip we received that day was the most obvious: “Don’t forget to look up.”

We ventured farther away from the hunters clustered near the edge of the woods, hoping to locate an area unspoiled. Late summer’s full leafage provided cover from the steady rain. Eventually it became possible to hear only the pitter-patter of raindrops above and the crunching of our steps on the leaves and twigs beneath our feet. In some way, this moment felt rarer than whatever we might find out here on a log or the side of a tree: finding ourselves out of earshot of traffic.

We spent almost two hours in the woods. Near noon, the group reconvened at the picnic shelter. The specimens were laid out on a long table, like the yield from a triumphant trick-or-treat. The amount of mushrooms harvested in all shapes and sizes was staggering. Warm yellows, oranges and reds coating unusual, imperfect shapes that awed. Dr. Patrick Leacock, the IMA’s scientific advisor, set about classifying them. If there were any apples in the bunch, they probably came from our sack.

After admiring the day’s finds, we turned to the post-foray cookout, which of course featured mushrooms on the menu: Hungarian mushroom soup and mushrooms foil-wrapped and grilled. Both courses, to our relief, had been procured commercially and prepared in a kitchen, not plucked from tree bark—we feared the one-and-done forest specimen even among the IMA enlightened. Earlier, Patrick had explained with clinical precision how the toxins of a poisonous mushroom will work on the central nervous system and the kidneys.

To balance the dark side of the ‘shroom, we were treated to light humor. The comment fetching the biggest laugh involved the insipidity of a giant white puffball mushroom one hunter brought back. People didn’t start feasting on it or anything—that’s not how the IMA operates as far as I saw—but all were familiar with this familiar mushroom. The verdict: beefy, yet boring. We opened our ears to more schooling on edible types. Mushrooms can be a delicious hobby (or obsession, as the case may be). But conversation went another direction, turning to debate on myco-law in Illinois, specifically the illegality of harvesting in certain areas (with some in the group arguing this law can be contested on a technicality: the definition of a mushroom as a fruiting body). Not much later we called a Lyft to take us back into the city.

We did not make it back up for the IMA Mushroom Show and Sale the following day, so our 2018 Labor Day myco-adventure came to an end. Something I’ve noticed after living and working in the city for nearly two decades is that so many of my reveries involve escaping from civilization and out into the country, the wilderness, seeking solid earth time and some quiet space. Which can be good when this leads to a foray with the IMA into Potawatomi Woods, and not so good, as I recently found out, when this leads to a remote farmhouse in eastern Iowa during the height of tornado season.