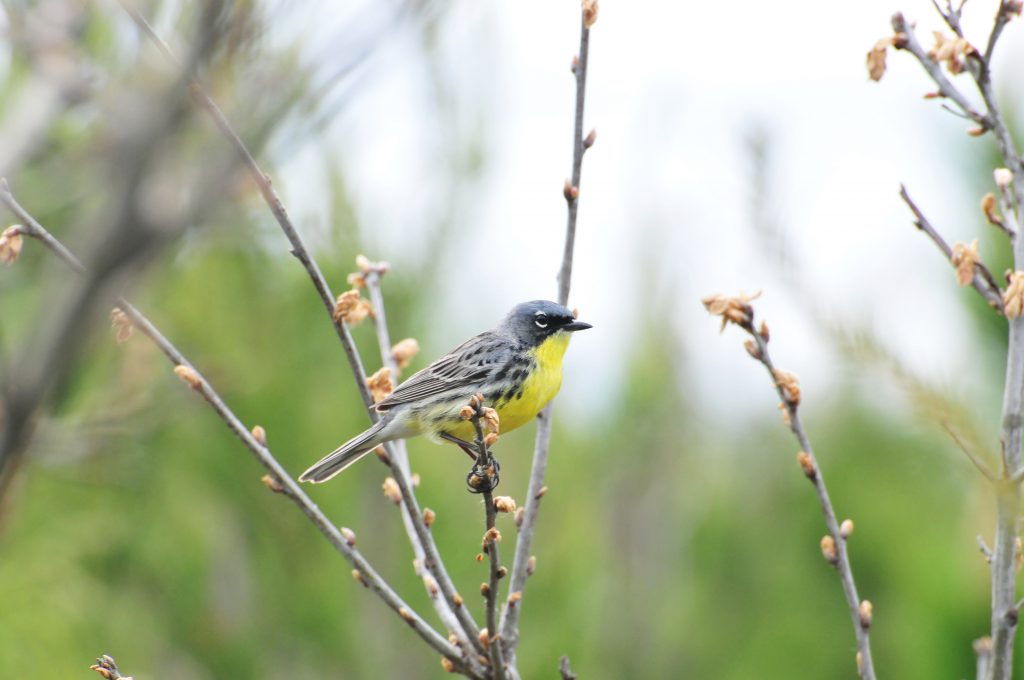 Chicago loves birdwatching, and I don’t just mean staring down the pigeons stalking CTA platforms. There’s a healthy number of bird enthusiasts in the city interested not only in scouting and identifying our local fowl, but in preserving sanctuary spaces dedicated to protecting regional and visiting species.

According to Audubon Great Lakes, the Great Lakes are a globally significant ecosystem for millions of migratory birds that rely on coastal habitats for much-needed rest and shelter during their annual trip along the Mississippi Flyway. (The Mississippi Flyway is the journey 325 bird species make each year from their breeding grounds in Canada and the northern United States to their wintering grounds along the Gulf of Mexico and in Central and South America.)
For local bird lovers, this means that bird habitats like in Lincoln Park’s North Pond, the Addison Bird Sanctuary, Jackson Park, Gompers Park, North Park Village Nature Center, South Shore Cultural Center and Montrose Point provide an opportunity to identify Chicago’s favorite visitors. Of course, sanctuaries aren’t the only places to spot these species. According to “Birds of the Windy City” by Audubon of the Chicago Region’s Judy Pollock, about seven million birds pass through the city every year.

Former Mayor Richard M. Daley signed the Urban Conservation Treaty for Migratory Birds with former U. S. Fish and Wildlife Service Director and current president and CEO of Defenders of Wildlife, Jamie Rappaport Clark in 2000. The Urban Bird Treaty program was launched in 1999—the first in New Orleans and second in Chicago—and works with cities and partners to conserve migratory birds through acts of preservation and education.

These acts include providing sustenance and shelter for birds that help clue scientists in on the state and health of our environment. Chicago’s commitment to protecting birds means birdwatchers are likely to spot the bright blue of an indigo bunting in our open woodlands and a warbler or house wren in our city neighborhoods. Chicago’s official city bird, the peregrine falcon, can be seen perched on our skyscrapers.

Chicago-based writer Raghav Rao was a fan of birdwatching in India and New York City before moving to Chicago, but found his appetite for the outdoors to be a bit more substantial following our winter months. At the end of the School of the Art Institute of Chicago’s spring 2018 semester, Rao, writing faculty member Jill Riddell, and writing program alumnus and author Sophie Lucido Johnson organized a bird walk for students at Magic Hedge in the Montrose Point Bird Sanctuary.

“When my plane landed in Chicago and I was eighteen and coming from Mumbai (a city with sixteen million people), I was struck by how, even on the highway leading into the city, there were these huge stretches of green,” says Rao. “We don’t have those in India, in-between spaces—not a park, not anything. So Chicago has always had that for me. Birding has transformed the most quotidian of tasks, running an errand, taking out the trash, into an opportunity to see a bird.”

Opportunities to identify birds and connect with nature don’t need to wait for a connection with the environment to be forged. In a partnership led by Openlands and Audubon Great Lakes, classroom-based and volunteer-driven program Birds in My Neighborhood gives local school children the chance to become acquainted with our city’s feathered friends.

Openland education manager John Cawood admitted to knowing very little about birds when he started with the organization six years ago, but has sharpened his skills, thanks to the team of volunteers that he says could train anyone.

“Birds are everywhere! Even in an urban setting where nature seems sparse to many people. We have found through the program that birds can be an entreé to a lifelong love of nature,” Cawood says. “One of our Birds in My Neighborhood volunteers was accused by kids of putting birds in their backyards. They had always been there, but the kids never noticed them until the volunteers came into their class and started a conversation with them about birds.”

Once you know what to look for, it’s impossible not to see common species like house sparrows and starlings, but also seasonal visitors like the incredibly rare yellow-throated Kirtland’s warbler that was nearly extinct fifty years ago.

“A couple weeks ago there was a Kirtland’s warbler hanging out at the Lincoln Monument down off of Columbus Drive,” says Cawood. “That is the rarest bird I have ever seen, not at all in the setting I was expecting to see it in. I love seeing a rainbow of different-colored birds, so it’s fun to go to a place like Montrose or Humboldt Park and see a yellow warbler, an oriole, an indigo bunting, a scarlet tanager and a rose-breasted grosbeak, all in one place.”

The birdwatching community is not limited to ornithologists or environmental professionals. Chicago has a rich community of bird and nature enthusiasts who take to social media to find like-minded admirers. Facebook group Birds and Beers plans annual events to gather and chat about birds while they sip on local brews. There’s also the Punk Rock Gardening and Bird Watching group and Chicago Ornithological Society, Bird Watching.

No matter your level of experience, birdwatching is relatively easy and relaxing to do in and around the city any time of year. Take a look around. You never know who might be peeking at you from behind a branch or bush.