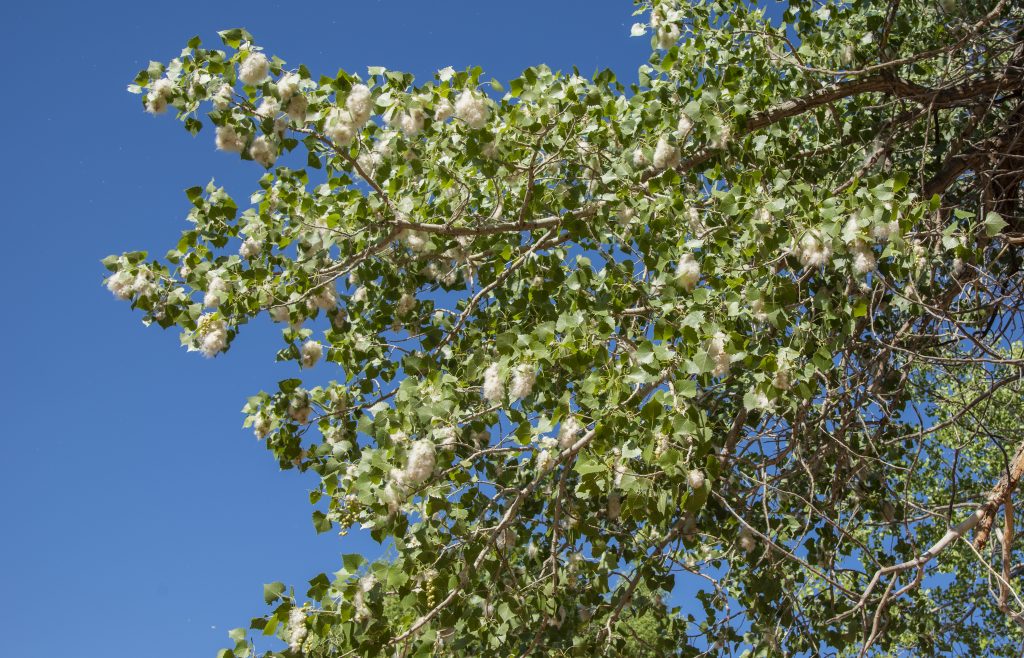 A cottonwood bough loaded with seeds disperses them in the wind, against a blue sky background

The first time I went to Wolf Road I was on a school field trip. At 8am, my graduate workshop class was unceremoniously loaded into a bus with a wooden belt. It had clearly been rented the evening before by a fellow who left his clip-on bowtie on my seat. During the thirty-minute drive west from the Loop, my professor passed around granola bars and binoculars to her tired grad students, and told us about the history of the Wolf Road Prairie.

The loose dozen of us disembarked in Westchester, Illinois—a city block of prairie that was initially destined to become another Western suburb. An eighty-two-acre piece of land that contains mesic prairie, mesic savanna and wetland is home to at least 360 native plant species. As I walked beneath sixteen-foot-high goldenrod, with their spiders by the same name, I stumbled upon a crumbling sidewalk that had been laid in the 1920s over half the land.

Our professor, Jill Riddell, told us that this piece of land was partially developed, and then abandoned, during the Great Depression of 1929. Luckily, no sewer or water lines were laid, and only a small grid of concrete was left behind. The large, uneven path leads to the heart of Wolf Road, where evidence of the latest prescribed burning had taken place. The burn is purposeful fire set by humans to ward off invasive plant species. A great cottonwood tree stands where the sidewalk ends, her insides black, crackly and charred. Or course, I tried to climb it.

A “living museum,” Wolf Road was preserved thanks to the efforts of a woman by the name of Valerie Spale, one of the founders of the Save the Prairie Society (STPS). In the early 1970s, a high-school teacher named Jack Shouba and his class began selling plants so they could purchase the first parcel of land at Wolf Road. Somehow, he is the only founder mentioned in any of the literature on STPS. There is little about Valerie Spale online. An article written by Spale herself doesn’t breathe a word of her work with Wolf Road.

The nearest limb of the cottonwood tree was ten feet above me. I naively believed that I still had the strength from my monkey-bar years, that I could get up there to my own private lookout to sit, read and write in it. Muscles quivering, I reflected on the often invisible work that comes with preserving nature. The best work is when there is no evidence of that work, no interference, letting the environment speak for itself.

Riddell told me, “[Spale] modestly mentions nothing of her individual contribution: the many meetings, phone calls, advocacy, contemplation, finding ways around the answer ‘no’ that she initiated day in and day out, all while working and also being a mother.” Spale had no formal institutional training, nor extra capital beyond her and her husband’s wages. Spale had the idea that if the lots of Wolf Road Prairie were owned by those who wanted to preserve it, this would throw a wrench in the gears of any big developer that could potentially swoop in and buy it.

About five feet up, I could hear the Tri-State Tollway, see the tip of the old schoolhouse, as well as the Dunkin’ Donuts across the street. So gray and odd compared to the soft green and cream field I had been walking through. In its current state, Wolf Road Prairie will be forty-five years old this September, and is considered the largest mesic prairie east of the Mississippi River. This living museum is co-owned by the Illinois Department of Natural Resources (IDNR) and the Forest Preserve District of Cook County (FPDCC).

Less than one one-hundredth of one percent of high-quality original prairie remains in Illinois. I attempted to climb a tree in that. I also fell out of that tree and broke my leg. In the prairie. All of my Girl Scout instincts kicked in. A peer of mine had been across the sidewalk, saw me fall and ran over. I told him I broke my leg and to go get a stick to make a splint. I called 911 and had to explain that I was in the middle of Wolf Road Prairie, and no, I did not know the crossroads.

Thirty minutes later six fire and policemen emerged from the grasses and carried me out of the prairie.

I rambled and made promises I couldn’t keep to the Redshift of the Westchester firemen. I told them about the 1920s sidewalks, and that I was a city girl so they’d have to forgive me for getting excited when I saw the tree. I now have a twelve-inch titanium plate screwed into my fibula, and two hearty pins through the inside of my ankle. The bow tie I found is on the stuffed animal my mother brought me from home.